Accessibility links
'Where Are The Women?': Uncovering The Lost Works Of Female Renaissance Artists A nonprofit has identified 2,000 works by women artists that had been stashed in Italy's public museums and damp churches. It's also supported restoration of 70 works from the 16th to 20th centuries. 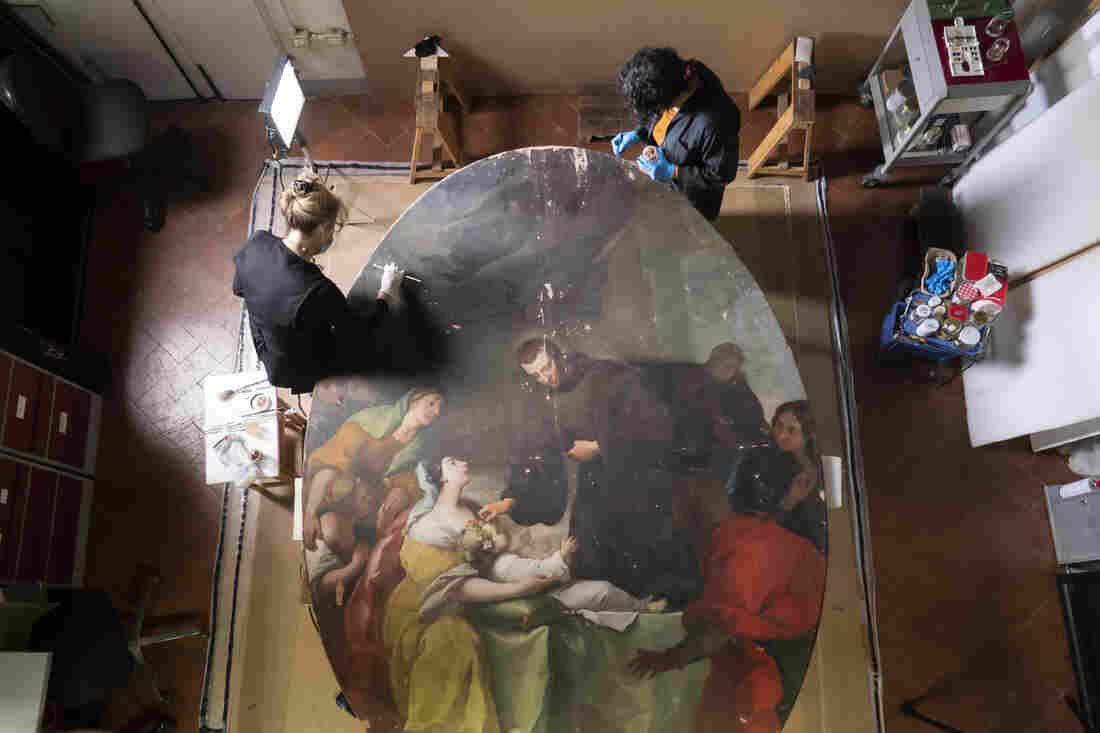 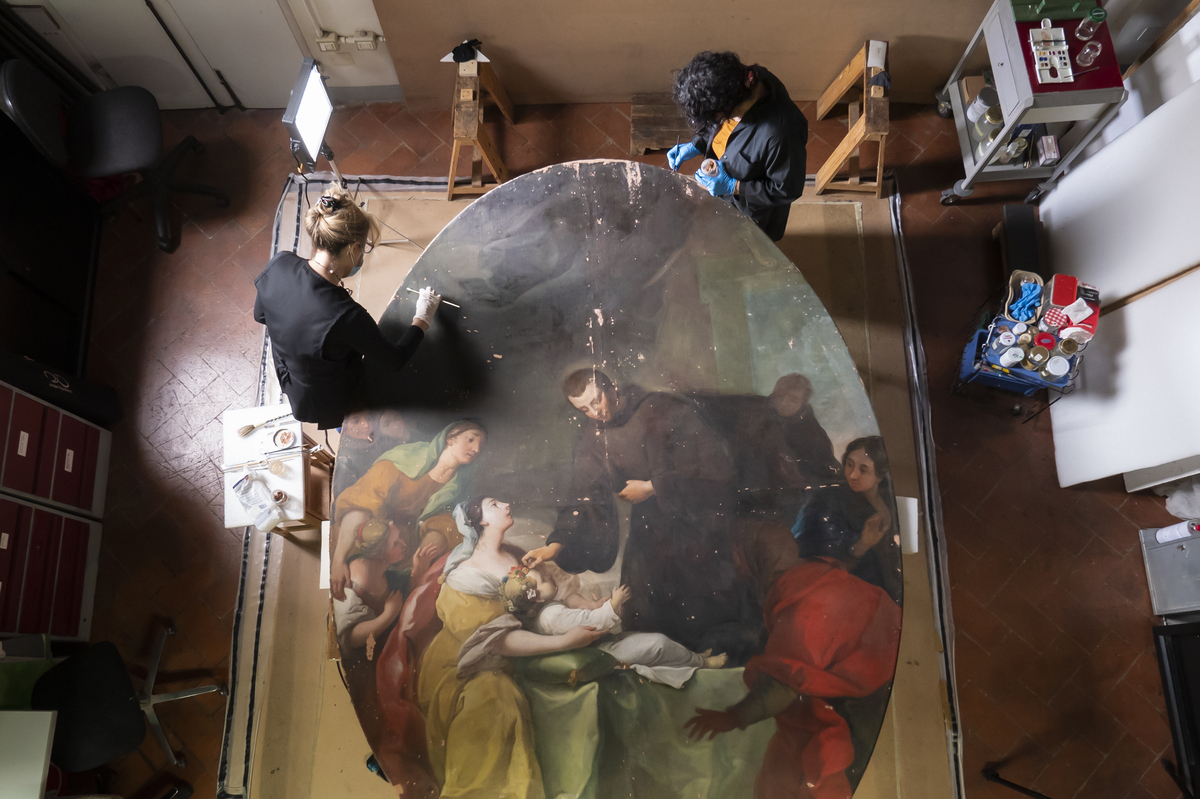 The final restoration project by the nonprofit Advancing Women Artists group features works by Violante Ferroni, an 18th century prodigy about whom little is known today.

Florence is one of the main stops on any art lover's European itinerary. At the Uffizi Galleries, visitors can have their fill of works by Renaissance masters Leonardo da Vinci, Michelangelo and Raphael.

Of course, none of these artists are women.

In 2009, a new nonprofit foundation in Florence started to investigate why.

"I started going into museum storages and attics and checking what was actually there, what works by women," says Linda Falcone, the director of Advancing Women Artists. "It was something that had never been done before because no one had ever before asked the question, 'Where are the women?' "

In the years since, AWA has shed light on a forgotten part of the art world, identifying some 2,000 works by women artists that had been gathering dust in Italy's public museums and in damp churches. It has also financed the restoration of 70 works spanning the 16th to the 20th centuries.

The organization was founded by Jane Fortune, an American philanthropist who died in 2018. Fortune was an intrepid art detective whom Florentines nicknamed "Indiana Jane" in homage to her native state and her Renaissance treasure hunting skills. 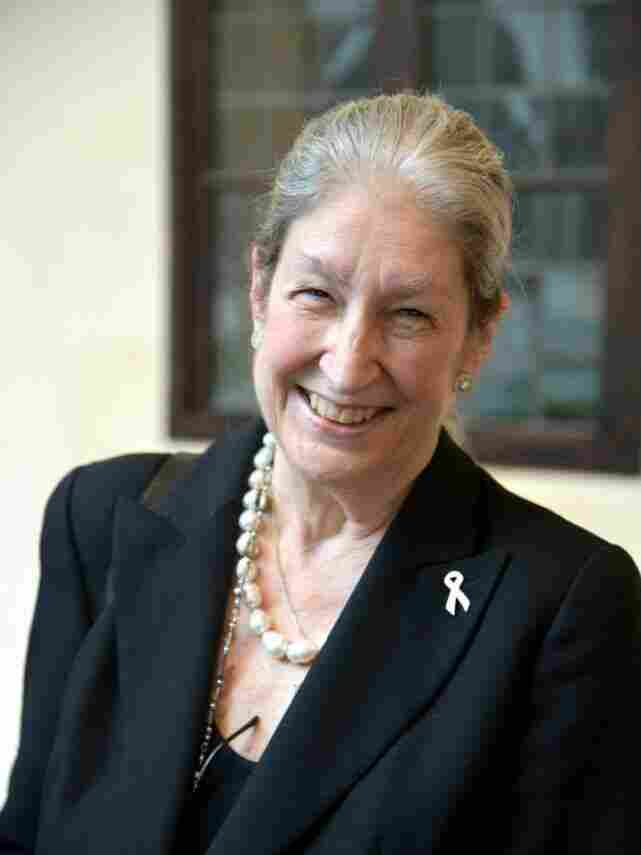 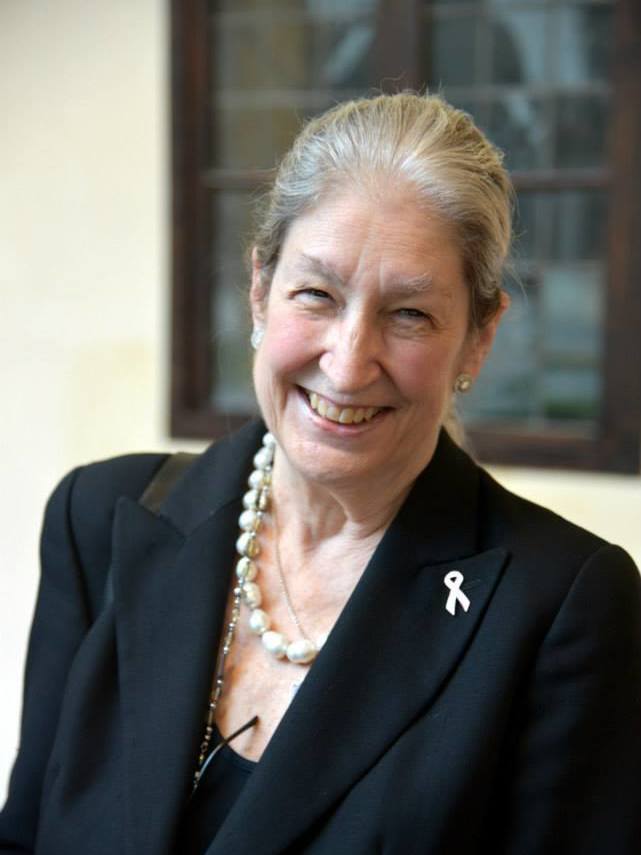 For centuries in Italy — the cradle of Renaissance masters — women with artistic talent were not allowed to enter academies. And the names of the few female artists from centuries past have mostly faded into oblivion.

So, she says, "No in-the-nude figures, for example, because it just wasn't considered appropriate. The inability to study in the same forum as male artists is very significant."

And yet the artists persisted. A few Italian women were able to study painting in their fathers' studios — most notably Artemisia Gentileschi, daughter of the 17th century painter Orazio Gentileschi.

AWA is responsible for restoring David and Bathsheba, one of her paintings that was found after being hidden in a Florentine palazzo's attic for 3 1/2 centuries.

The group also rediscovered a 21-ft.-long canvas depicting 13 life-size males — the only known Last Supper painted by a woman. It is by the 16th century Dominican nun Plautilla Nelli — whose workshop was inside a convent in Florence.

Florence has a long Last Supper painting tradition. But, says Falcone, most of the works are static.

"Whereas," she says, "Nelli actually chooses sort of the key moment in which Christ announces his betrayal. And you have all of the apostles feeling the emotion of that very serious news. And so she is able to do a study of their responses, of their psychological responses."

And, unlike most Last Suppers by male artists, Nelli puts food on the table, says Falcone.

"She has lettuce, she has salt cellars, a lot of wine, bread for every apostle and knives and forks and beans and lamb — she did a Last Supper were people were meant to eat, first of all," she says. 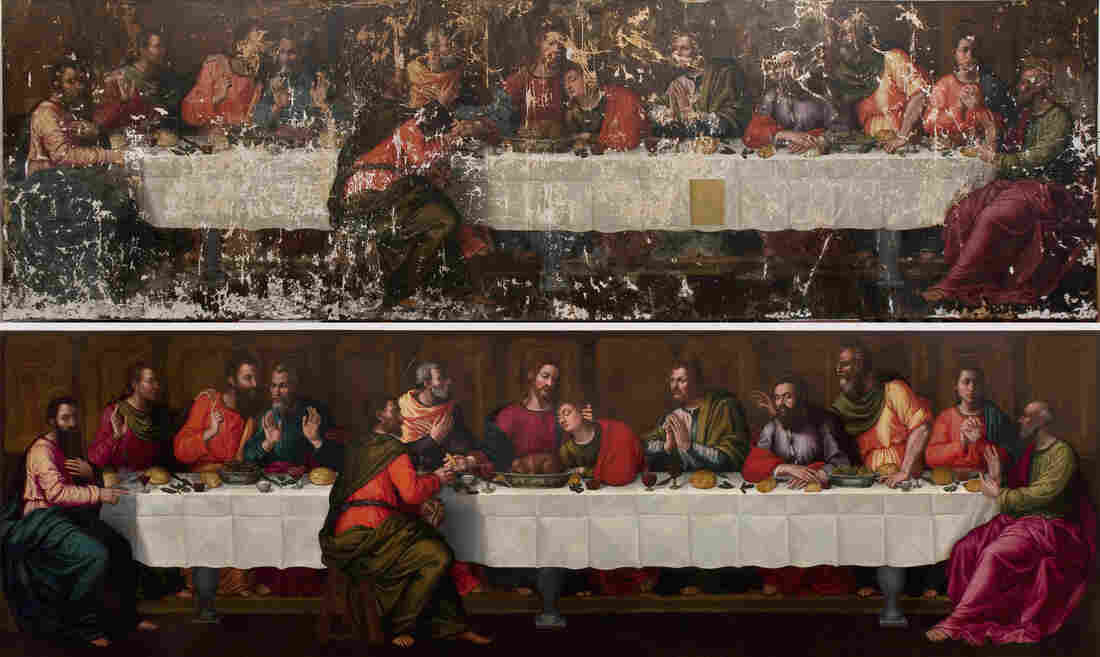 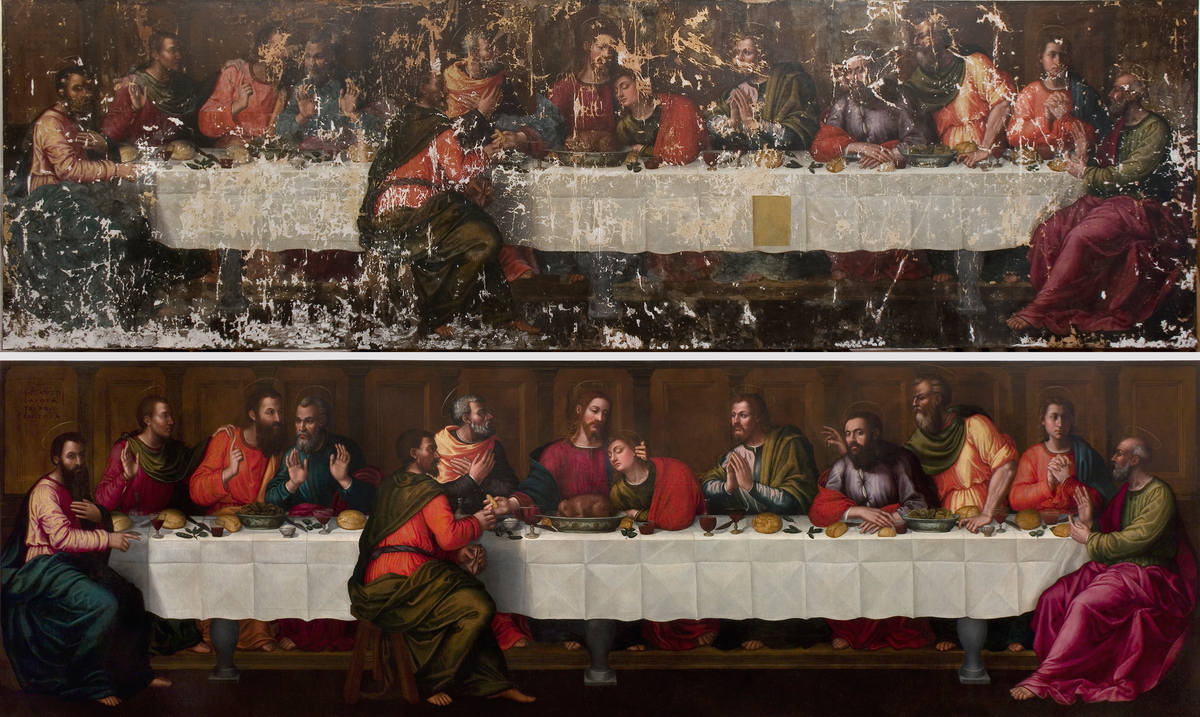 Nelli's Last Supper, before and after restoration.

Also, unlike male artists of the time, Nelli signed her canvas — adding the words "pray for the paintress."

The nun's works were prized by Florentines during the 16th century because they were believed to be imbued with spirituality. Her contemporary, the art historian Giorgio Vasari, wrote that she "would have done marvelous things if, like men, she had been able to study and to devote herself to drawing and copying living and natural things."

Art restorer Elizabeth Wicks, an American based in Florence, says that like so many female artists, Nelli was then forgotten. Born in 1720, Ferroni lived in a period of great sociological change in Florence, says writer Ann Golob, who has done research work for AWA.

"We do know that well-educated women certainly were getting much more of a seat at the table and there were definitely a few women who were achieving much greater prominence than beforehand," she says.

At the time, female artists were usually limited to painting still-lifes and small portraits. But while still in her 20s, Ferroni was awarded a prestigious commission by Florence's San Giovanni di Dio hospital to paint two ovals — each of them 8-by-11 1/2 feet — with spiritual scenes to help heal the ill. The subject was usually reserved for men.

For Wicks, restoring these paintings during the coronavirus pandemic has had particular relevance.

"Just to be able to work on this project was so healing for me," she says. "I mean, I was healing the art, but I was also healing myself in a certain sense."

The art of healing has been a constant theme of AWA's mission, says Falcone. 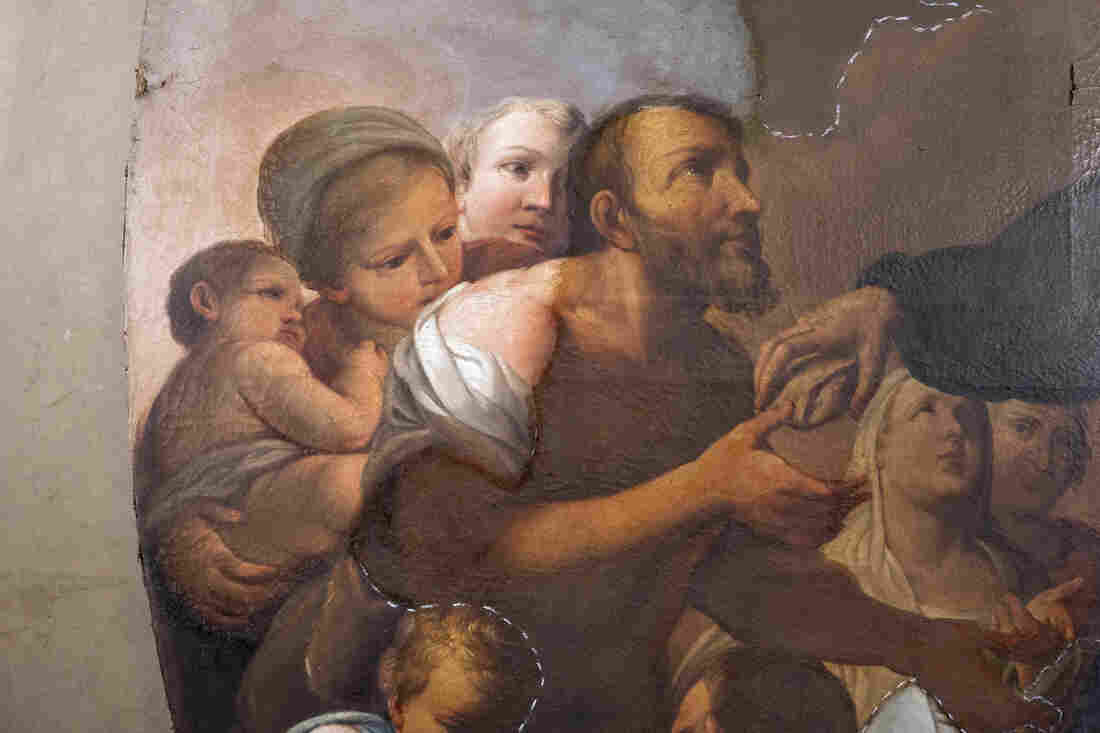 "Art is a living entity and a piece of art has its life," she says. "You know, it gets hurt. It gets damaged. It it needs renewal. It needs to be talked about and paid attention to, et cetera."

Falcone says that through restoration work, documentation and exhibits, AWA has contributed to a growing worldwide interest in and awareness of art by women. Yet the organization recently announced it is shutting down next June because it does not have sufficient funds to expand.

Falcone says the group has accomplished what it set out to do.

"It's a victory," she says, "because we're saying, wow, we're at a point where the museums are starting to place value on the female part of their collection."

Advancing Women Artists has fulfilled its mission, says Falcone because art lovers are now beginning to find answers to the question: Where are the women? 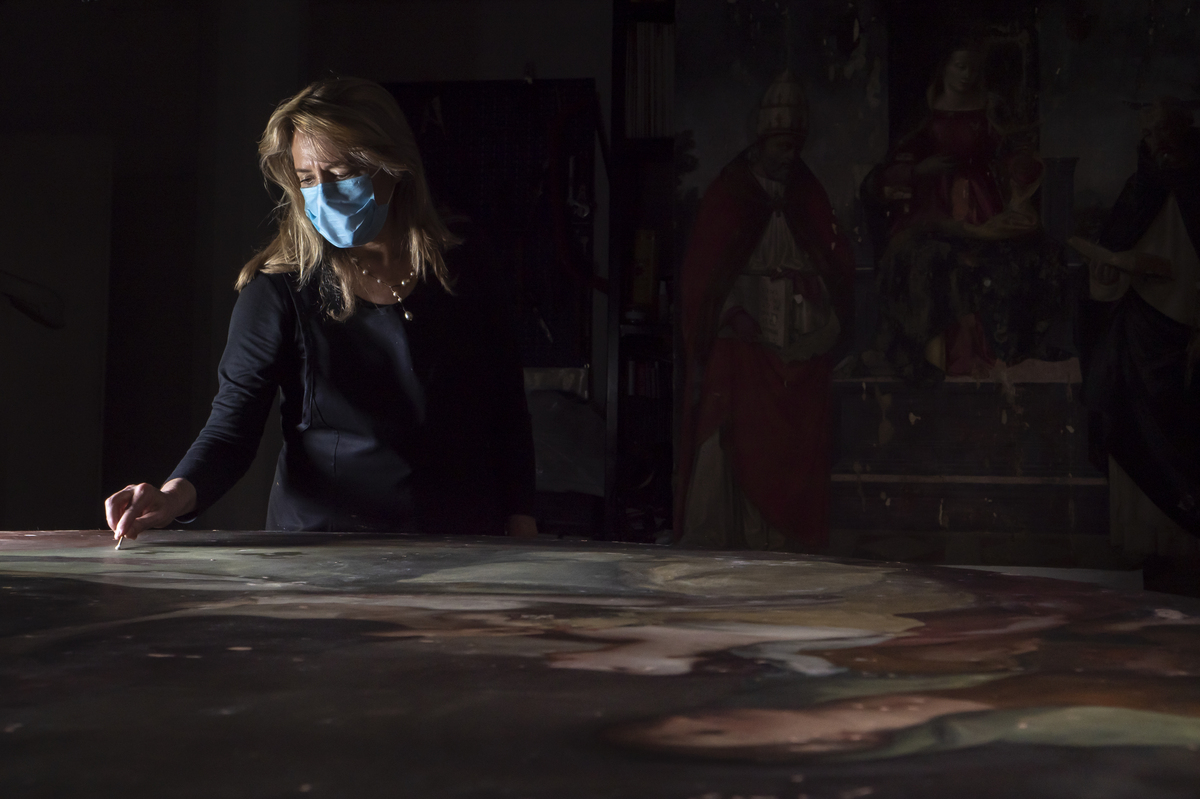