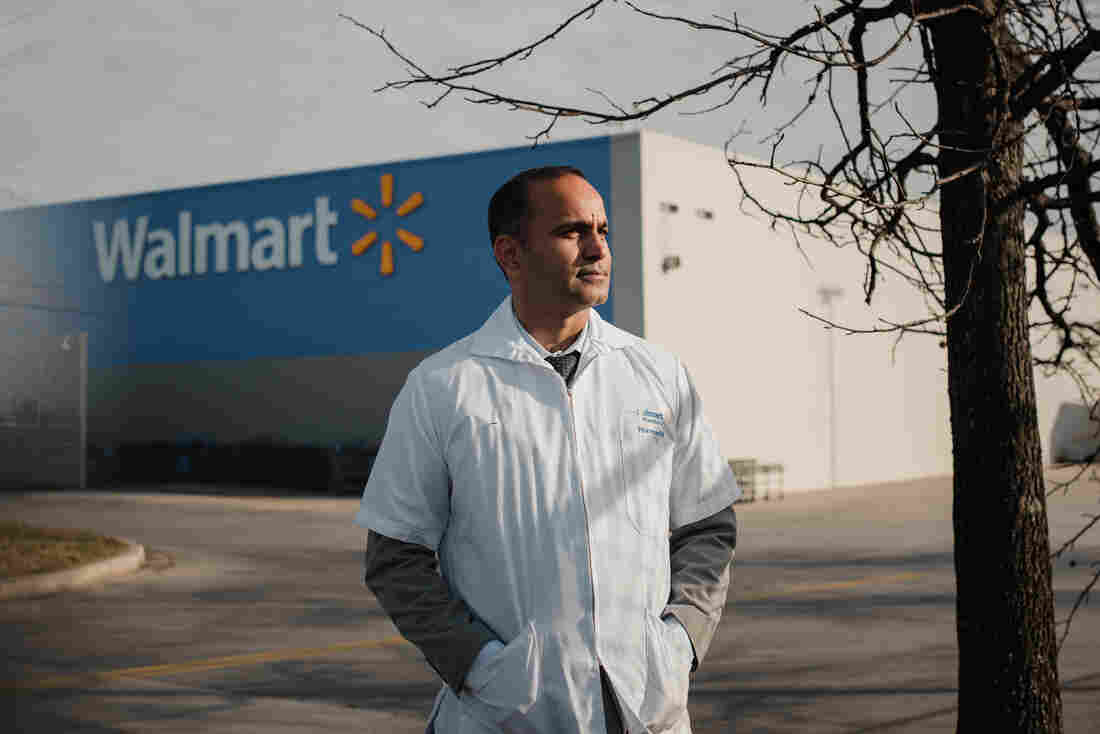 Ashwani Sheoran, 41, says that when he worked as pharmacist at different Walmarts, he spoke up about the handling of opioid prescriptions and was told to stay quiet and was eventually let go. Hannah Yoon for NPR hide caption 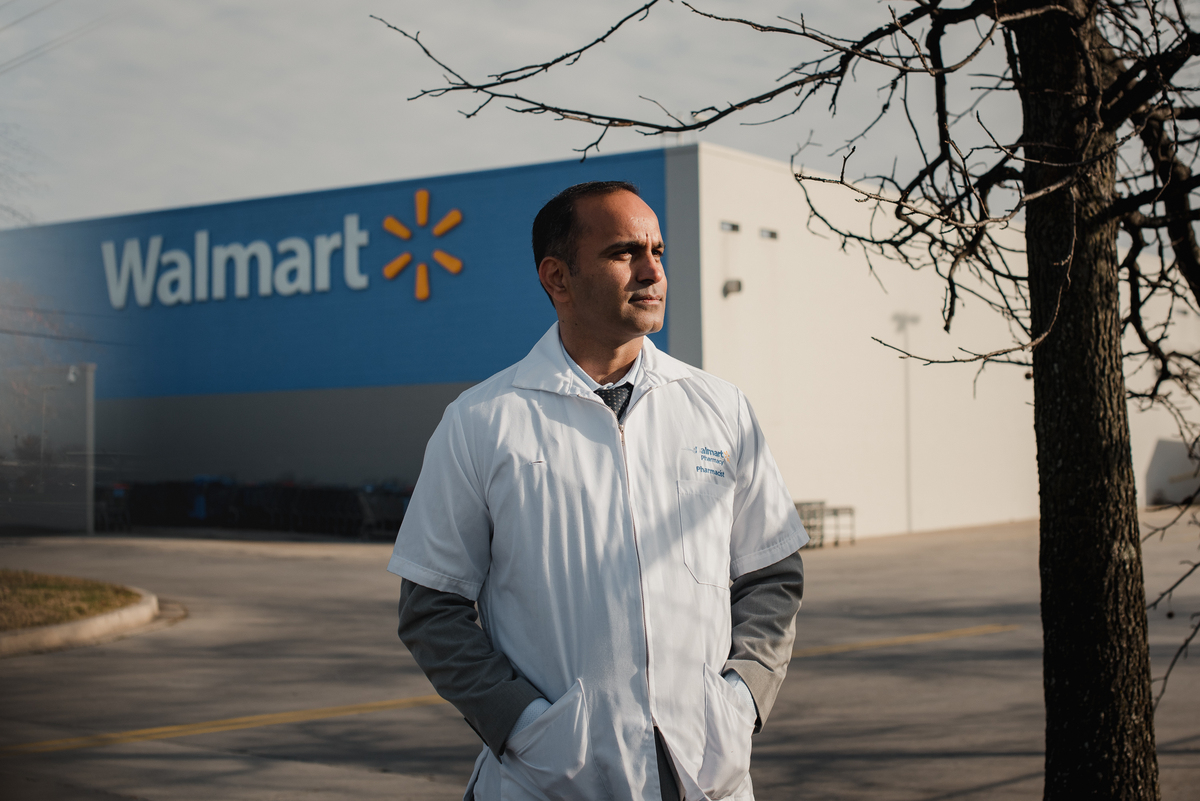 Ashwani Sheoran, 41, says that when he worked as pharmacist at different Walmarts, he spoke up about the handling of opioid prescriptions and was told to stay quiet and was eventually let go.

When Ashwani Sheoran showed up for early morning shifts at pharmacies in rural Michigan wearing his white Walmart smock, he often found customers waiting, desperate for bottles of pain pills.

"I see my patients, 15 to 20, already lined up to get prescriptions filled for morphine sulfate, oxycodone and other straight narcotics," he said.

This was in 2012 when the prescription opioid epidemic was exploding, killing tens of thousands of Americans every year.

Sheoran, now 41, told NPR he kept seeing what the Drug Enforcement Administration considers "red flags." Patients were driving long distances to buy their pills from Walmart. They couldn't explain why they needed such powerful opioid doses.

He started raising alarms, sending emails to his bosses in Michigan and to Walmart headquarters in Arkansas. He warned that their pharmacies were feeding a black market for opioids like Oxycontin.

What happened next made him angry. "They start putting more pressure on me to just be quiet and not to say anything more," Sheoran said.

"They told me, 'Do not reach out to the DEA, do not call the police. If you do so, your employment is going to be terminated immediately,' " Sheoran said, describing a warning he said was issued by his supervisor.

Walmart is facing a public reckoning over its role in the nation's deadly opioid epidemic, which killed about 450,000 Americans from 1999 to 2018, according to the Centers for Disease Control and Prevention.

The Justice Department, along with state and local governments, are suing the retail giant, claiming Walmart shipped and sold billions of highly addictive pills without proper safeguards.

But Sheoran wasn't alone in raising concerns. An NPR investigation, based on interviews and government court filings, found that Walmart pharmacists warned for years about opioid sales that appeared dangerous or illegal.

Sheoran worked for roughly a year as a "floater" pharmacist at the company's stores in small towns north of Detroit, places like Bad Axe and Caro.

He said red flags kept popping up. Prescriptions weren't filled out properly, and physician signatures sometimes appeared to be printed by a computer. When he tried to reach doctors to find out what was happening, he often couldn't get them on the phone.

"Which is a direct indication that those prescriptions are not for any genuine medical purpose and instead are being abused by the patient and distributed on the street," Sheoran said.

Under the Controlled Substances Act, doctors write prescriptions for their patients, but pharmacists like Sheoran are required to serve as a kind of second gatekeeper.

It's their job to make sure that powerful, highly addictive drugs like opioids are dispensed and sold only for legitimate medical purposes.

He was later suspended and then fired by Walmart early in 2013. He sued the company under a federal whistleblower statute, claiming his warnings went unheeded. That case is still pending.

Internal company documents made public last month as part of a Justice Department lawsuit against Walmart show pharmacists all over the country warned Walmart executives about opioid sales that appeared unsafe.

Pharmacists complained that dangerous "pill-mill" doctors were sending patients to Walmart after other chains stopped filling their opioid prescriptions. Pharmacists sent emails to Walmart executives saying they feared losing their licenses and their jobs because of opioid sales.

According to the DOJ complaint, patients often paid in cash, also considered a red flag by the DEA. A pharmacist at a Walmart store in Texas said filling opioid prescriptions "is a risk that keeps me up at night."

As part of its complaint against Walmart, the Justice Department pointed to one case in North Carolina where a doctor was eventually sentenced to 20 years in prison for illegal opioid prescribing.

"Walmart's own pharmacists reported concerns about the doctor up the corporate chain, but for years, Walmart did nothing except continue to dispense thousands of opioid pills," said Robert Higdon, the U.S. attorney for the Eastern District of North Carolina, in a statement.

Walmart declined NPR's repeated requests for interviews, and a spokesman didn't respond to a list of detailed questions.

In an October complaint filed by Walmart against the DOJ and the DEA, company attorneys blamed the opioid epidemic on problem doctors and government regulators.

As part of that filing, the company acknowledged it was warned about "red flags" by the DEA that could indicate prescriptions might be unsafe or illegal.

But, according to Walmart, those alerts weren't legally binding and amounted to what the company characterizes as "mere guidance."

Walmart also argued it was the job of government regulators, not Walmart, to crack down on dangerous pill-mill doctors.

Could Walmart pharmacists say no?

In public statements, Walmart also highlighted the fact that its pharmacists had the authority to reject suspicious prescriptions; the company says that happened frequently at its stores.

"Walmart always empowered our pharmacists to refuse to fill problematic opioids prescriptions, and they refused to fill hundreds of thousands of such prescriptions," the company said in a statement.

That sounds like a lot. But federal data shows Walmart stores dispensed hundreds of millions of opioid pills a year.

The company shipped the equivalent of roughly 5.2 billion opioid pills to its chain of 5,000 pharmacies between 2006 and 2012. Those are years when records collected by the DEA are publicly available.

Former Walmart pharmacists and other industry experts told NPR there was intense pressure to sell opioids and fill prescriptions quickly and without asking a lot of questions.

"When they say they gave pharmacists the ability to use their professional judgment, did they?" said Nicholas Hagemeier, a pharmacist and professor who studies opioid dispensing at East Tennessee State University.

According to Hagemeier, Walmart pharmacists – like other chain pharmacy employees – often lacked the time, the training, the information and the corporate backing to review opioid prescriptions properly.

Hagemeier surveyed pharmacists nationwide and found those working at chain pharmacies, including Walmart, were more likely to fear disciplinary action if they questioned too many opioid prescriptions. Bonuses were often linked to sales and efficiency, not safety.

"There is no incentive financially to say no," he said.

Opioid Scandal Haunts Drug Companies As They Respond To Pandemic

Critics say the impact of these decisions on Americans who shopped at Walmart pharmacies was often devastating. Christina Dine was in her 20s when she was prescribed high doses of oxycodone by a doctor in Ohio who later lost his license.

As she fell into addiction in 2012, Dine said no one at the local Walmart where she often bought her pills intervened or warned her of the danger.

"They took it and filled it like any other prescription. I never once had a pharmacist or any other pharmacy staff question it, question me, ask me any questions whatsoever."

Dine, 33, is a recovery nurse now, helping others struggling with addiction. But she lost years of her life to prescription opioid and heroin use.

"I first got sober in 2015 after my daughter's father overdosed and died. I kind of went in and out. I kind of struggled for a bit, but I've been sober since 2017," she told NPR.

Court documents filed by the Justice Department show federal regulators informed the company as early as 2009 that its system for managing high-risk medications wasn't robust enough to keep patients safe. Under pressure from the DEA, Walmart signed an agreement in 2011 promising reforms.

DEA raided a Walmart pharmacy in 2016

Critics say unsafe practices continued. In 2016, federal agents raided a Walmart pharmacy in Texas as part of a probe into a pair of pill-mill doctors who are now in prison, one serving a 20-year term and the other serving a 10-year term.

However, this December, the Justice Department filed a civil suit alleging Walmart "unlawfully filled thousands upon thousands of invalid controlled-substance prescriptions." According to the DOJ, penalties could run into the billions of dollars. 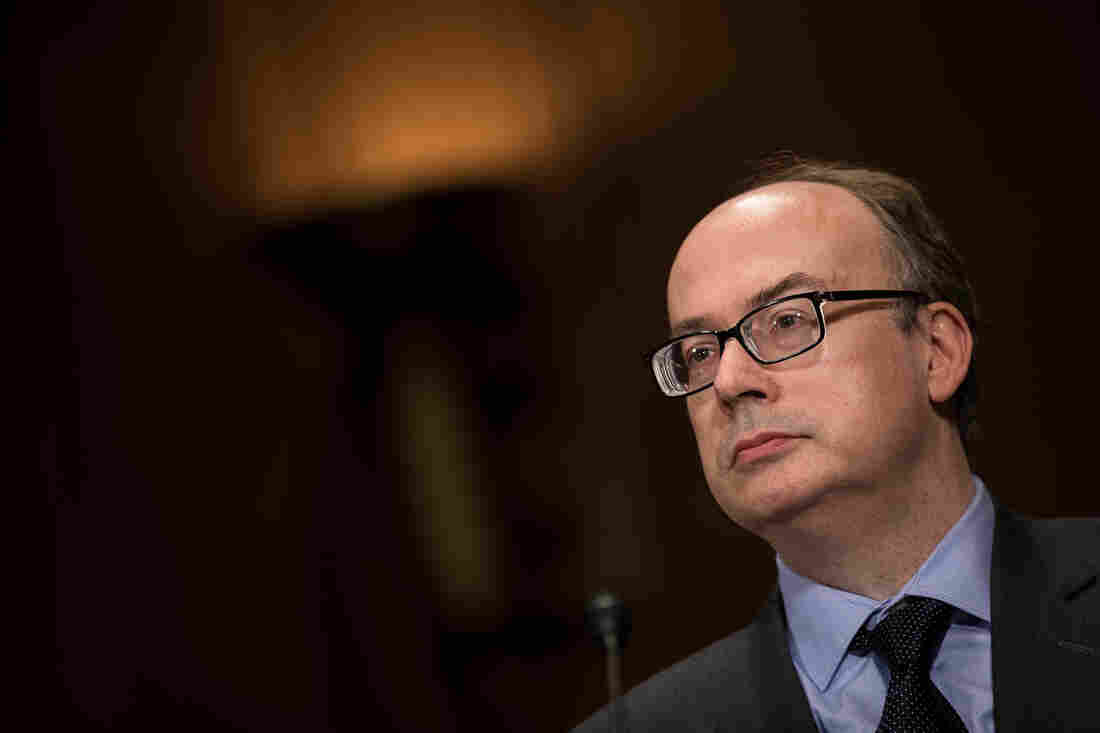 "Walmart had the responsibility and the means to help prevent the diversion of prescription opioids," said Jeffrey Bossert Clark, acting assistant attorney general of the DOJ's Civil Division.

"Instead, for years, it did the opposite — filling thousands of invalid prescriptions at its pharmacies and failing to report suspicious orders of opioids and other drugs placed by those pharmacies."

These arguments, and Walmart's counterclaim that federal regulators are to blame for the opioid crisis, will be tested in court as lawsuits against the company filed by the DOJ and local and state governments move forward.

Polster rejected that motion and pointed to what he described as "obvious deficiencies" in Walmart's opioid safety practices. The case is expected to go to trial later this year.

Facing similar legal pressure and a fierce public backlash for its role in the opioid crisis, Purdue Pharma, the maker of Oxycontin, agreed last year to settle with the federal government for $8.3 billion.

Walmart has promised to defend its opioid practices in court, claiming federal investigators have acted unethically as part of a scheme to "embarrass" the company to leverage a large cash settlement.

Governments suing Walmart say any settlements or fines paid by the company would go to help communities struggling with the opioid crisis.

Other national pharmacy chains including CVS, Rite Aid and Walgreens face similar lawsuits linked to their roles in the opioid trade.

Ashwani Sheoran said if more companies had served in their gatekeeper role at the start of the epidemic, a lot of harm might have been avoided.