Accessibility links
Pelosi Is Reelected House Speaker By New Congress The long-serving Democratic House leader begins another term as the Capitol waits to see what kind of political dynamic will prevail in a new Congress and with a new administration. 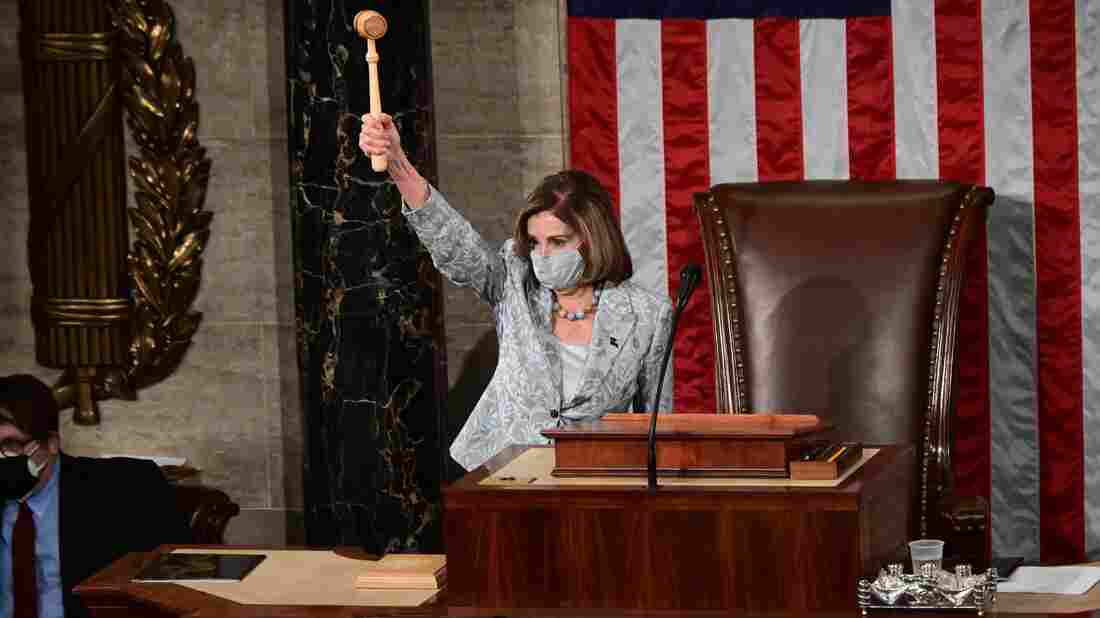 House Speaker Nancy Pelosi will lead a tighter majority this congressional session after the Democrats lost seats in the November election.

House Speaker Nancy Pelosi, D-Calif., was narrowly reelected leader of the chamber on Sunday, continuing her control of the Democratic majority at a time of questions about the path ahead for Congress and who may take the gavel after her.

In remarks, Pelosi told her fellow members that they "begin the new Congress during a time of extraordinary difficulty." After the last Congress passed a relief package in its waning days, she stressed that lawmakers' "most urgent priority will continue to be defeating the coronavirus."

Pelosi also noted the diversity of the 117th Congress.

"It gives me great pride," she said, "to serve as speaker of the most diverse House in American history, with a record-shattering 122 women, 100 years after women won the right to vote."

Democrats have a tighter majority after the November election, which meant there was little room for dissent for Pelosi to be reelected.

Pelosi, a California Democrat, is 80 and has served in Congress for 33 years. She hinted last year that this might be her final term as the leader of the House. She has no clear heir apparent, and her closest deputies, Rep. Steny Hoyer of Maryland and Rep. Jim Clyburn of South Carolina, are 81 and 80, respectively.

Pelosi has sought to knit together a caucus divided between relatively moderate suburban members and much more liberal urban ones. Although Democrats have preserved their majority, the speaker and her lieutenants presided over a net loss of seats in the 2020 election.

Democrats have groused among themselves about the causes of the losses in 2020. One complaint has been that the party's failure to repudiate issues said to be perceived by voters as extreme, such as "defund the police," hurt it with the moderate voters it sought amid the broader presidential election.

The most liberal members, including New York Rep. Alexandria Ocasio-Cortez, reject the idea that Democrats' messaging tacked too far left.

Managing the tension between the two sides will be a big challenge as Pelosi continues her stewardship of the majority.

The game has changed

Much of the speaker's workload will shift, however, from resisting a Republican administration to helping advance the goals of her fellow Democrat, President-elect Joe Biden. Pelosi likely will work every opportunity available to help pass Biden's agenda, including more coronavirus relief legislation.

But the immediate focus in Washington and national politics has shifted to the Senate, control of which is up for grabs depending on the outcome of Tuesday's runoff elections in Georgia. If Republicans preserve their majority in the upper chamber, they'll likely prevent Biden and Pelosi from achieving many of their aims.

Although it is seen as a less likely outcome, if Democrats win the Georgia races and give the party a slim majority in the Senate, the whole ballgame will change, and Pelosi will march into her new term as speaker with far greater power.