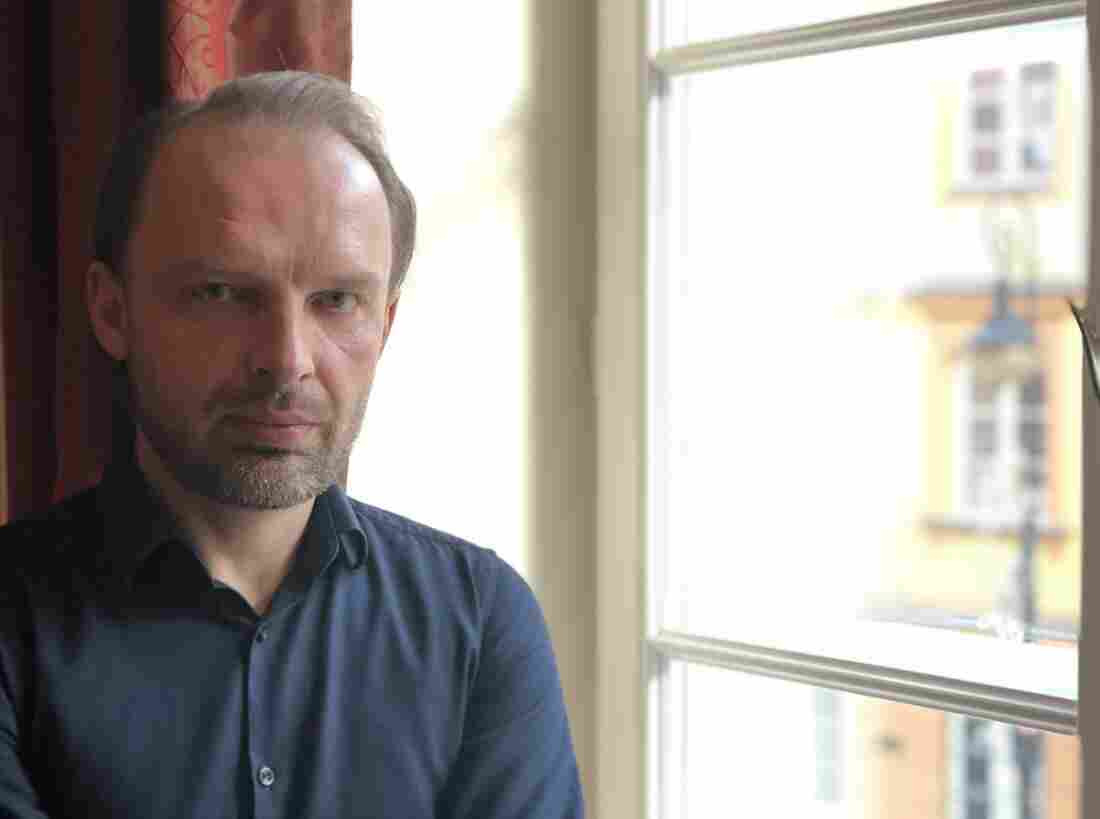 Journalist Mariusz Kowalewski quit his job at Poland's national public broadcaster TVP after editors asked him to follow an outspoken critic of the country's ruling party with a drone. "This was an intimidation method straight out of communism," he says. Rob Schmitz/NPR hide caption 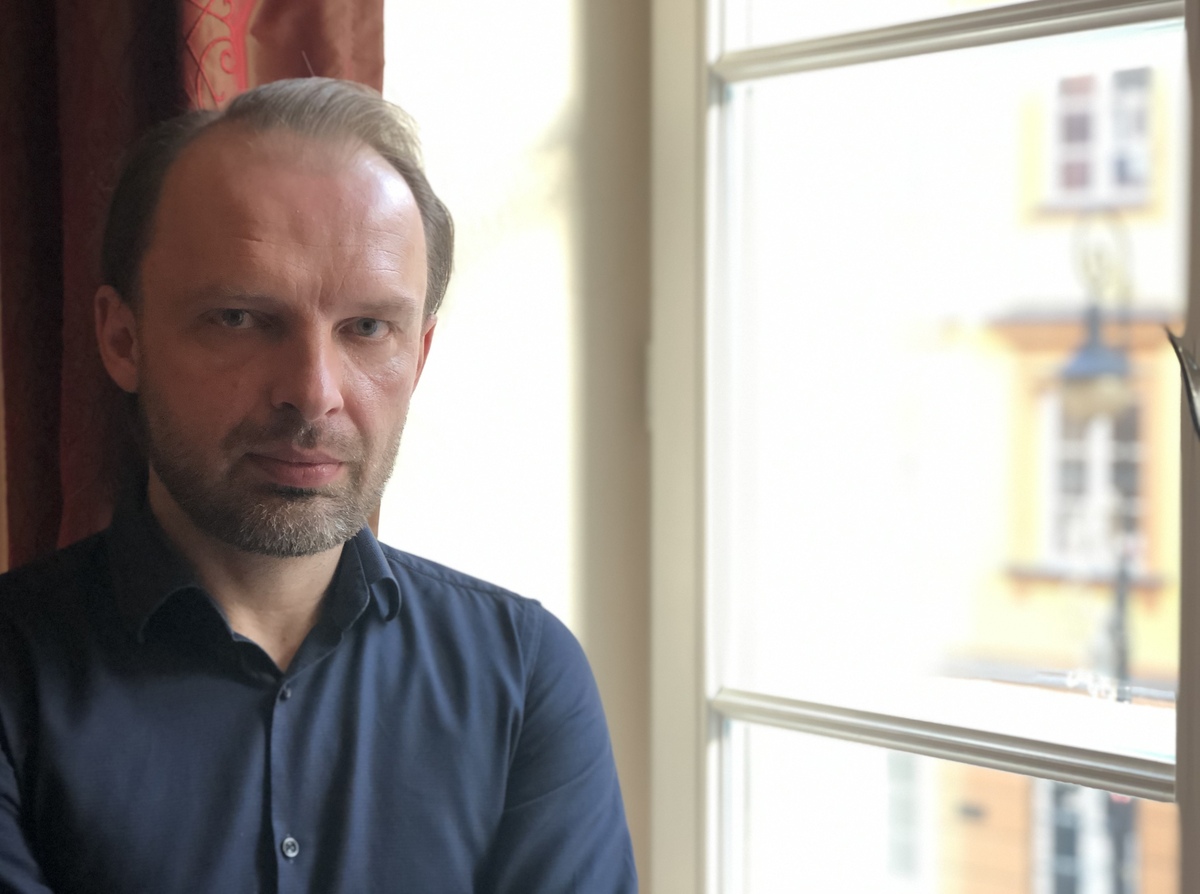 Journalist Mariusz Kowalewski quit his job at Poland's national public broadcaster TVP after editors asked him to follow an outspoken critic of the country's ruling party with a drone. "This was an intimidation method straight out of communism," he says.

Journalist Mariusz Kowalewski noticed something was amiss when his editors came to him with a new assignment: follow an outspoken critic of Poland's ruling party with a drone.

"The idea was to send this drone over to his house in order for him to notice it and to feel threatened, like he was being watched," Kowalewski recalls. "This was an intimidation method straight out of communism."

The order came from his editors at TVP, Poland's largest broadcaster, which oversees a vast network of public television and radio stations.

Kowalewski says he sabotaged the plan by giving the drone operator an outdated address, but he says the episode taught him public television is no longer serving the public. Instead, he says, it's serving Poland's governing right-wing populist party, Law and Justice. "Instead of information, viewers now get blunt propaganda that is meant to assure them that Law and Justice is the best party to rule this country," he says.

The party believes it is fighting an infiltration of liberal European values, spread through foreign-owned media, in this largely conservative Catholic country. Since Poles first voted Law and Justice into office in 2015, its government has not only taken control of the country's largest public broadcaster, but it has also vowed to "repolonize" the national media. Critics say this is code for turning them into government propaganda outlets. The government's moves to control the country's media have become a political flashpoint in this European Union member state, which the EU is investigating along with other various rollbacks of democratic norms in Poland since Law and Justice took office.

In early December, state-backed oil refiner PKN Orlen announced it was buying the private, German-owned Polska Press, a move that will put 20 of Poland's 24 regional daily newspapers under Orlen's control, as well as 120 weekly papers and many websites reaching an estimated 17.4 million online readers in a country of 38 million people.

Polish journalists are bracing themselves. "If I feel there is suddenly political pressure on me, I will be forced to quit," says Marek Twarog, editor-in-chief of Dziennik Zachodni, Poland's top-selling regional newspaper owned by Polska Press. "What has happened to TVP is making all of us worry about the political impact on our paper," he says.

TVP is taxpayer funded and previously was editorially independent. But in 2015, Law and Justice began passing legislation that led to a purge of the public broadcaster's editorial leadership and replaced them with party loyalists. It also put TVP under the supervision of a new National Media Council.

"I'd prefer — regardless of political coloring — if we had Polish capital in Poland's media market. Because then we really can say that what is represented is perhaps politically diverse but ultimately in Poland's interest," he says.

"I know the changes we've made aren't politically popular with some in the opposition," he acknowledges. "But I say to those who don't like what we're doing, 'Win the election next time.' " 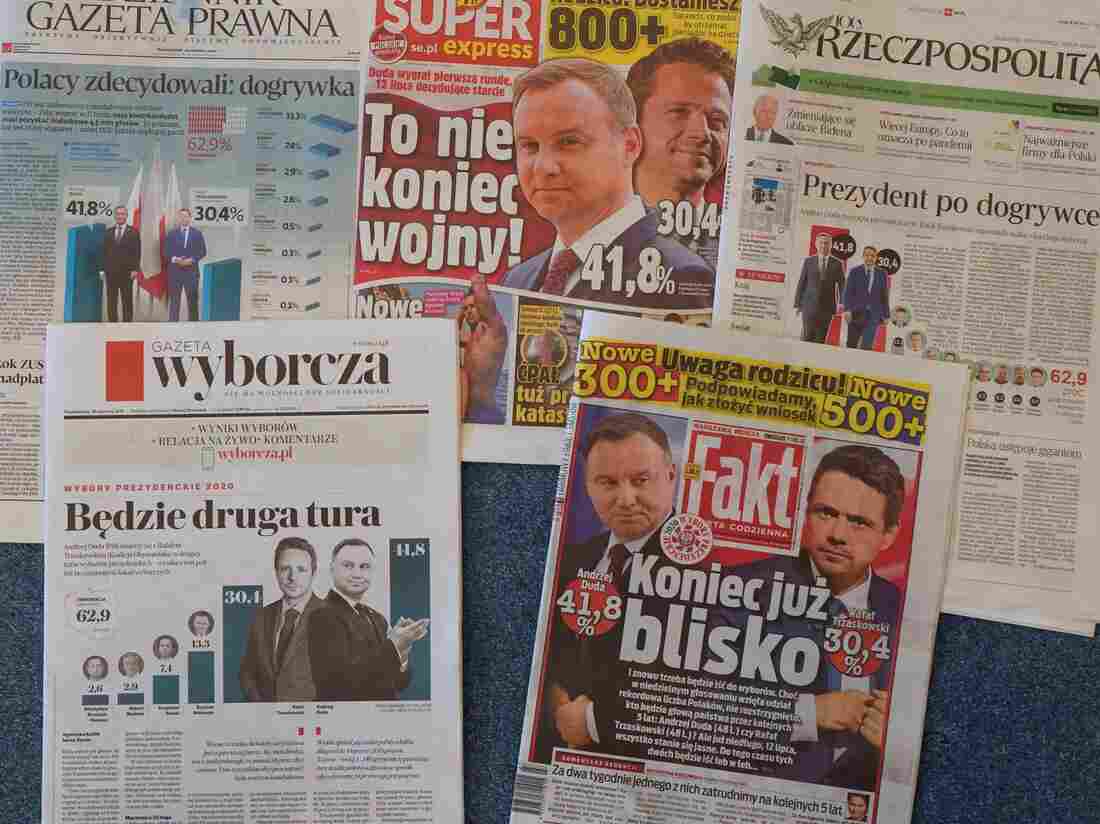 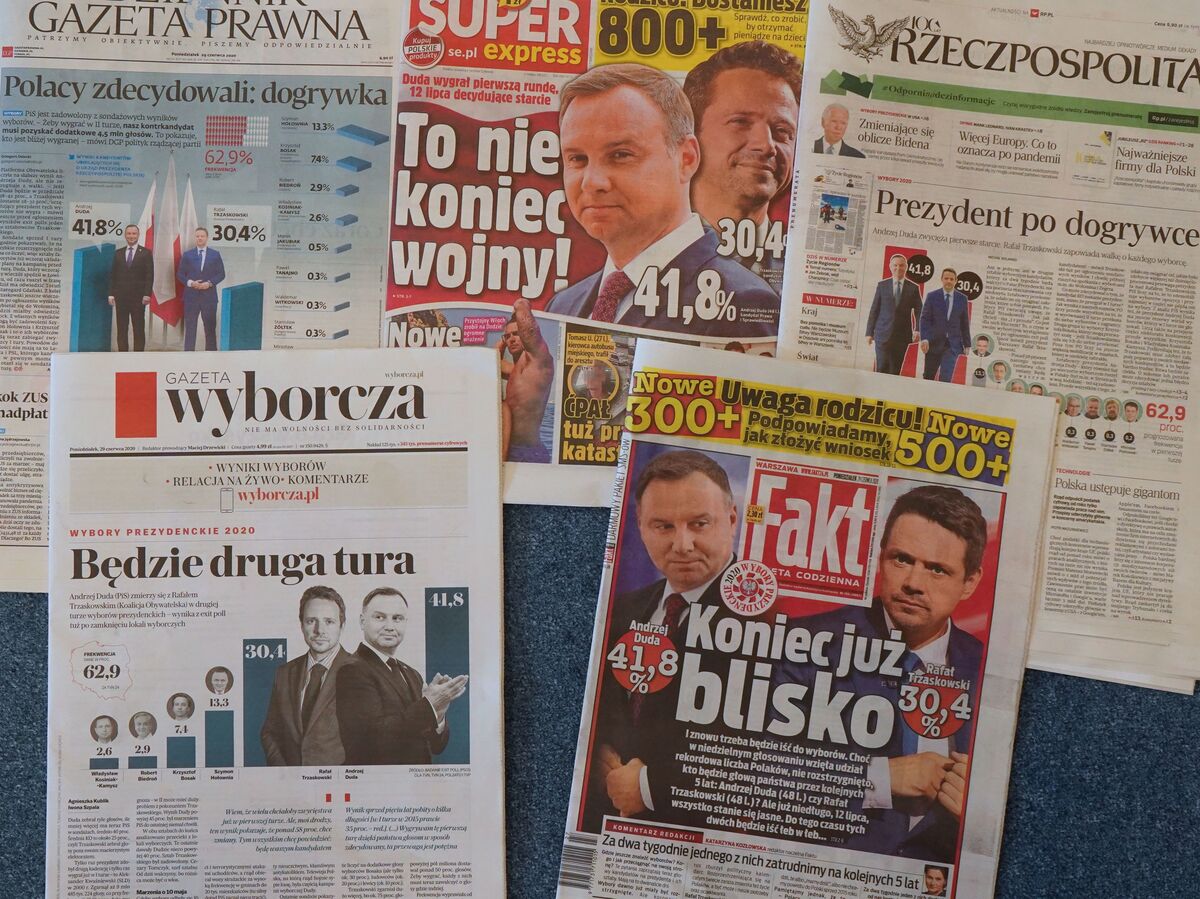 Front pages of main polish newspapers are pictured one day after the first round of the presidential election in Poland on June 29. European poll observers say "media bias" influenced recent Polish elections.

Yet media takeovers could hand the ruling party an unfair advantage. Media bias was a problem in Poland's last national elections, according to the Organization for Security and Cooperation in Europe, which monitors elections. Law and Justice won reelection in October 2019, but while voters "had numerous options available to them, their ability to make an informed choice was undermined by a lack of impartiality in the media, especially the public broadcaster," said Jan Petersen, head of the election observer mission that monitored the Polish vote.

TVP has only two competitors for the bulk of the country's viewers: Polsat, owned by the richest person in Poland, and TVN, owned by the U.S.-based Discovery. TVP, now under the ruling party's control, has the broadest reach. "Thirty-three percent of the population of Poland, they only have access to TVP24, which is 24 hours of news, so their brains are formed by that," says Andrzej Krajewski, a retired journalist and former adviser to Poland's National Broadcasting Council.

Krajewski has spent years analyzing hundreds of hours of news coverage from TVP and its two rivals, focusing on how the public broadcaster has changed since the Law and Justice party took it over. "They are propagandists. They want to convince people that they are right and the opposition is wrong; that we are surrounded by enemies," Krajewski says. 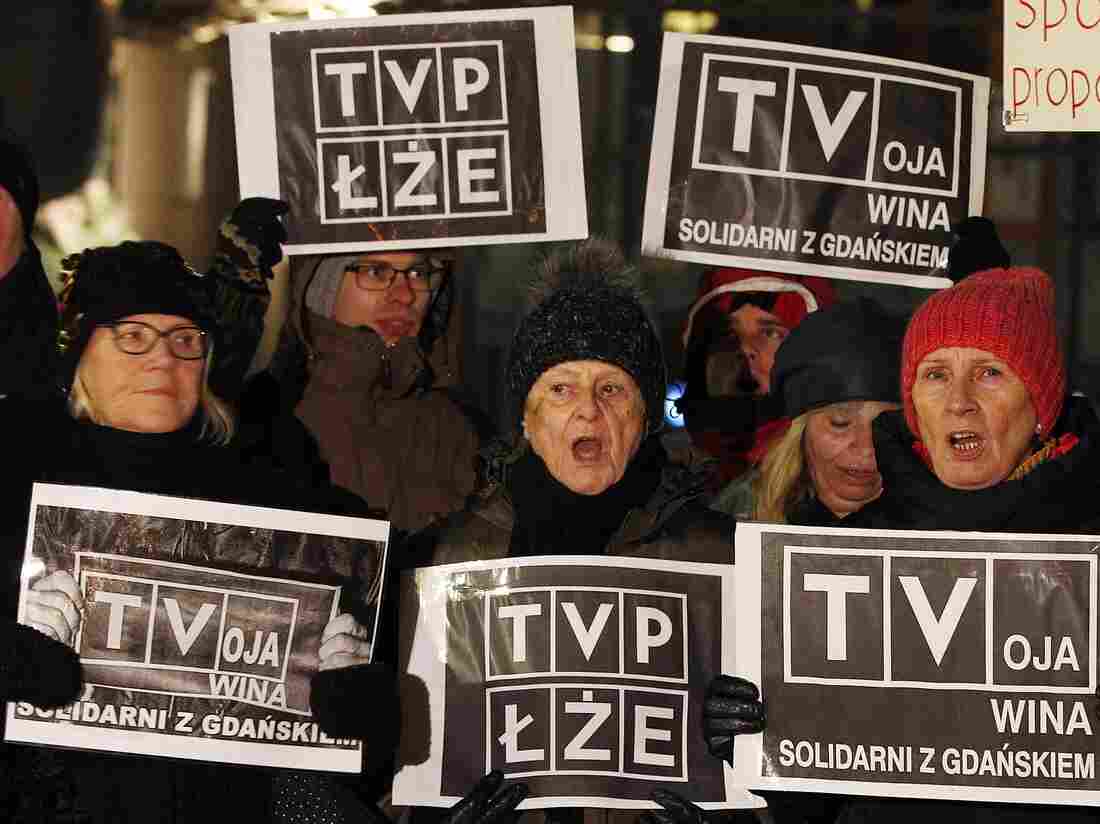 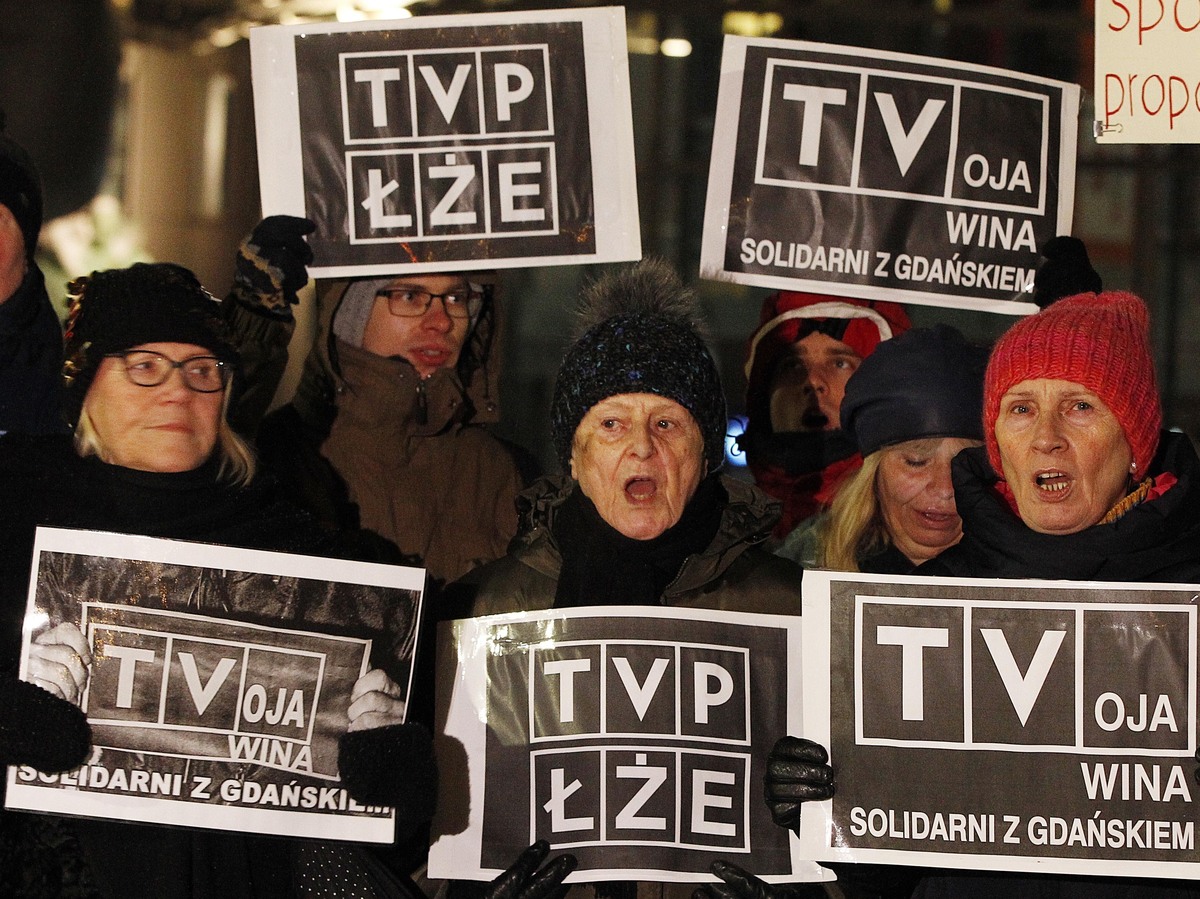 Protesters hold signs demanding the resignation of TVP chairman Jacek Kurski in Warsaw, Poland, on Jan. 26, 2019, blaming the atmosphere created by the government-controlled broadcaster's messaging for the killing of Gdansk Mayor Pawel Adamowicz.

Propaganda then and now

At 7:30 each evening, TVP's nightly news program continues to enjoy the highest ratings in the country. And as its high-paced theme song pipes into televisions across the country from its studios above central Warsaw, in the street below, in the freezing winter weather, a dedicated group of protesters blare another song from their megaphones: the broadcaster's nightly news theme from Poland's communist era.

The news was propaganda then — and it's returned to propaganda now, says protest organizer Karol Grabski. "We've come here every day since the death of Mayor Adamowicz, who was murdered in Gdansk," he says.

Gdansk Mayor Pawel Adamowicz — a liberal critic of Law and Justice — was stabbed to death while he was on stage at a charity event in January 2019. Adamowicz had been a target of dozens of TVP news stories criticizing him for real estate dealings, his openness to migrants and his support of LGBT rights. Critics blame the network for creating an atmosphere that led to his killing.

Grabski leads his group of protesters in a chant that echoes through the empty city streets of Warsaw: "TVP Lies! TVP Lies!"