Accessibility links
Julian Assange: British Court Rejects Request To Extradite WikiLeaks Founder The WikiLeaks founder took refuge for seven years inside the Ecuadorian Embassy in London. He was removed in April 2019 and imprisoned while he awaited a decision on his extradition. 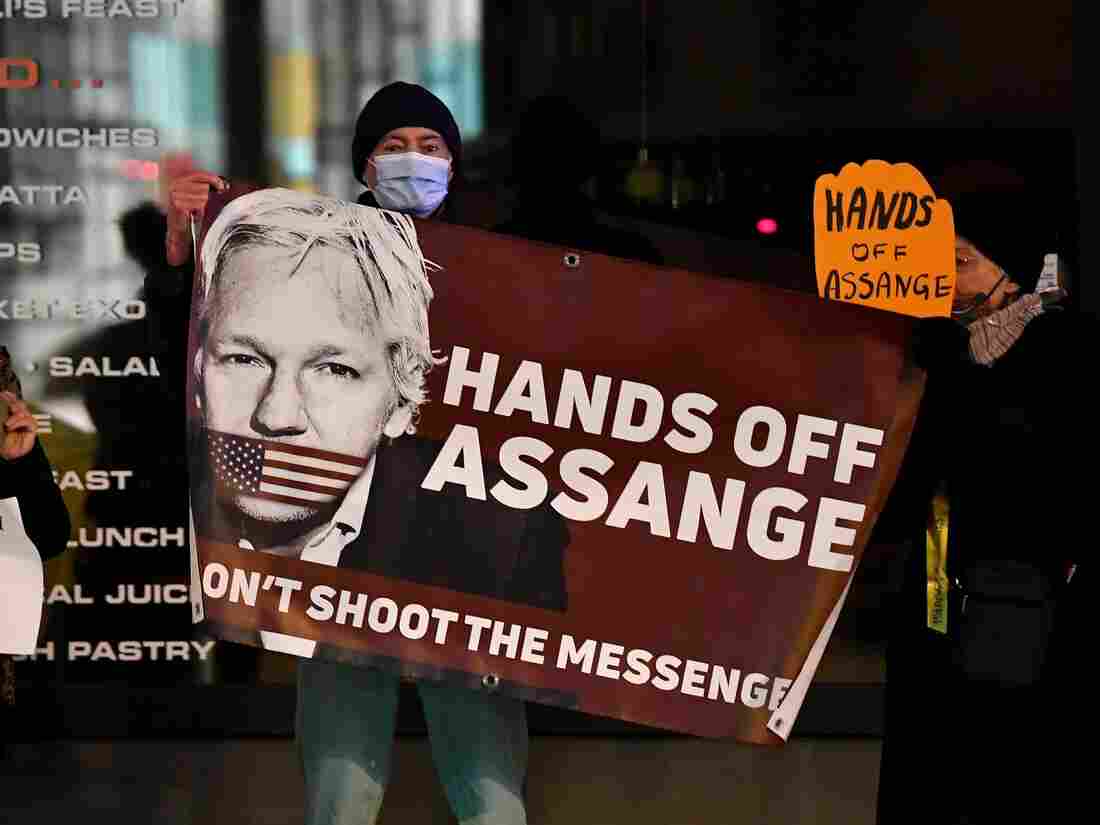 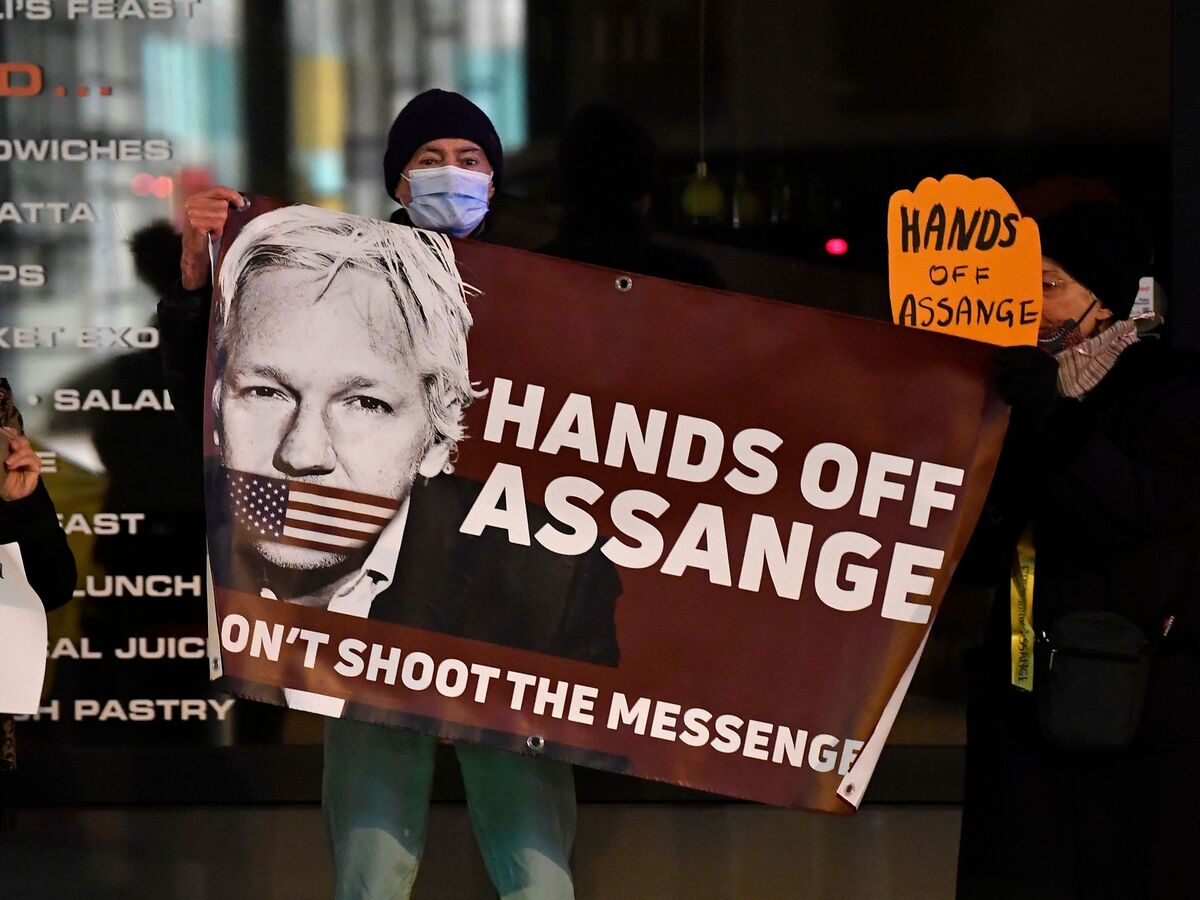 A British court has denied a request from U.S. officials to extradite WikiLeaks founder Julian Assange on charges of illegally obtaining and sharing classified material related to national security. The judge cited the risk of suicide if Assange is sent to U.S. custody.

"I find that the mental condition of Mr. Assange is such that it would be oppressive to extradite him to the United States of America," British Magistrate Vanessa Baraitser said in her decision Monday.

Baraitser's move surprised many watching the case, who had expected the judge to honor the U.S. request. It allows Assange to continue to evade U.S. law enforcement, an effort that's included spending seven years in the Ecuadorian Embassy in London.

The judge ordered Assange to be discharged. But the U.S. government said it will continue to pursue his extradition.

"While we are extremely disappointed in the court's ultimate decision, we are gratified that the United States prevailed on every point of law raised," Justice Department spokesman Marc Raimondi said in a statement.

Saying that the judge rejected Assange's contentions that he was politically targeted and should be protected by free speech laws, Raimondi added, "We will continue to seek Mr. Assange's extradition to the United States."

A psychiatrist who analyzed Assange in a London prison told Baraitser that the WikiLeaks founder was at a high risk of suicide if he ended up incarcerated in the United States.

Assange was diagnosed in December 2019 with recurrent depressive disorder, which was at times severe, and sometimes accompanied by hallucinations and often with thoughts of suicide, Baraitser wrote in her opinion.

"Although the imminence of extradition or extradition itself would trigger the attempt, its cause would be Mr. Assange's clinical depression," the judge noted. Citing the psychiatrist who examined Assange, she wrote, "He stated, 'I am as confident as a psychiatrist ever can be that, if extradition to the United States were to become imminent, Mr. Assange will find a way of suiciding.' "

Assange is facing 18 federal counts. He is accused by the U.S. government of conspiring with Chelsea Manning, a former U.S. Army intelligence analyst, to compromise U.S. government computer networks and to obtain and publish classified documents.

The documents posted on the WikiLeaks website and shared with journalists included classified diplomatic cables and sensitive military reports from the Iraq and Afghanistan wars. The U.S. asserts that the release of those documents made public the names of locals in Iraq and Afghanistan who assisted America's military, putting their lives at risk.

Defense attorneys had argued that so much time had passed when the U.S. began unveiling charges against Assange – about a decade after classified documents were published on WikiLeaks – that it amounted to an "unjust and oppressive" circumstance. The delay undermined Assange's ability to defend himself, his attorneys said, adding that his mental health has deteriorated in the interim.

U.S. prosecutors said the delay was because Assange continued to break the law by releasing more sensitive diplomatic cables and classified U.S. military reports. And they added that he chose to live as a fugitive, including sequestering himself inside the Ecuadorian Embassy in London for seven years to avoid arrest.

Assange entered the embassy in June 2012 to avoid an extradition order related to a criminal inquiry in Sweden, making him a fugitive from British justice.

He was expelled from the building in April 2019 and sent to London's Belmarsh prison.

Assange's attorneys are expected to ask for his imminent release from prison as they await a likely appeal from the U.S. to the U.K.'s High Court, The Washington Post reported.

If convicted of all U.S. charges, Assange could face a maximum of 175 years in prison, likely in the U.S. Administrative Maximum Facility in Florence, Colo. The prison maintains strict lockdown for inmates, who get almost no human contact and are kept in their cells 23 hours a day.

Those tough conditions might have pushed Assange to suicide, Baraitser said.

The press freedom group Reporters Without Borders welcomed Monday's decision but said it is concerned by the judge's rationale. On purely substantive grounds, the group noted, Assange would have been handed over to the United States.

Rebecca Vincent, the group's director of international campaigns, disagreed with the court's findings that the case against Assange isn't a matter of free speech and political retribution.

"We remain convinced that Mr. Assange has been targeted for his contributions to journalism," Vincent said. "As we all know, the publication of the leaked information informed extensive public-interest reporting. The public had a right to these stories, and the public still has a right to these types of stories."

The judge's ruling, advocacy groups say, signals that journalists everywhere must be concerned about what they report about the United States.

"The mere act of publishing secrets that the U.S. government doesn't want the public to see is not akin to spying," said Bruce Brown, executive director of the Reporters Committee for Freedom of the Press. "It's deeply troubling that the English court sided with the U.S. Department of Justice in its attempt to criminalize such disclosures, even if the court ultimately rejected the U.S.'s extradition request."

But Reporters Without Borders Secretary General Christophe Deloire also noted of Assange's case, "An extradition would have set a precedent. For those who defend him, it is a huge relief."

"Assange is a journalist and deserves a chance, I am in favor of pardoning him," López Obrador said. "We'll give him protection."