Accessibility links
Congress Certifies Joe Biden's Victory After Riot At Capitol Lawmakers returned to the Capitol after hours of chaos in which protesters forced their way into the building and abruptly halted Congress' tally of Electoral College votes. 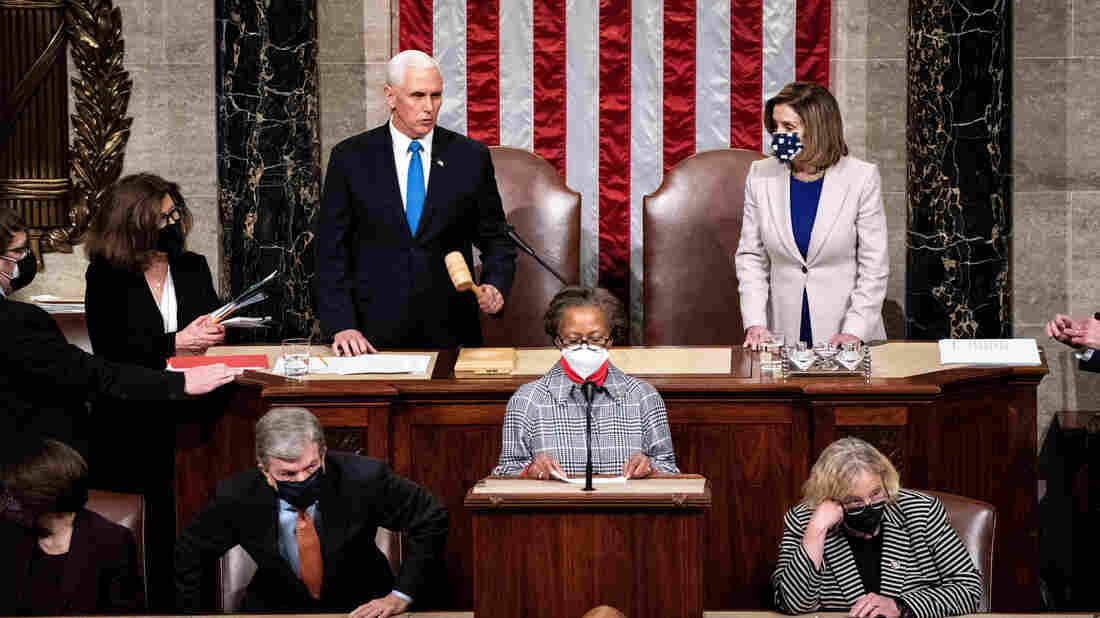 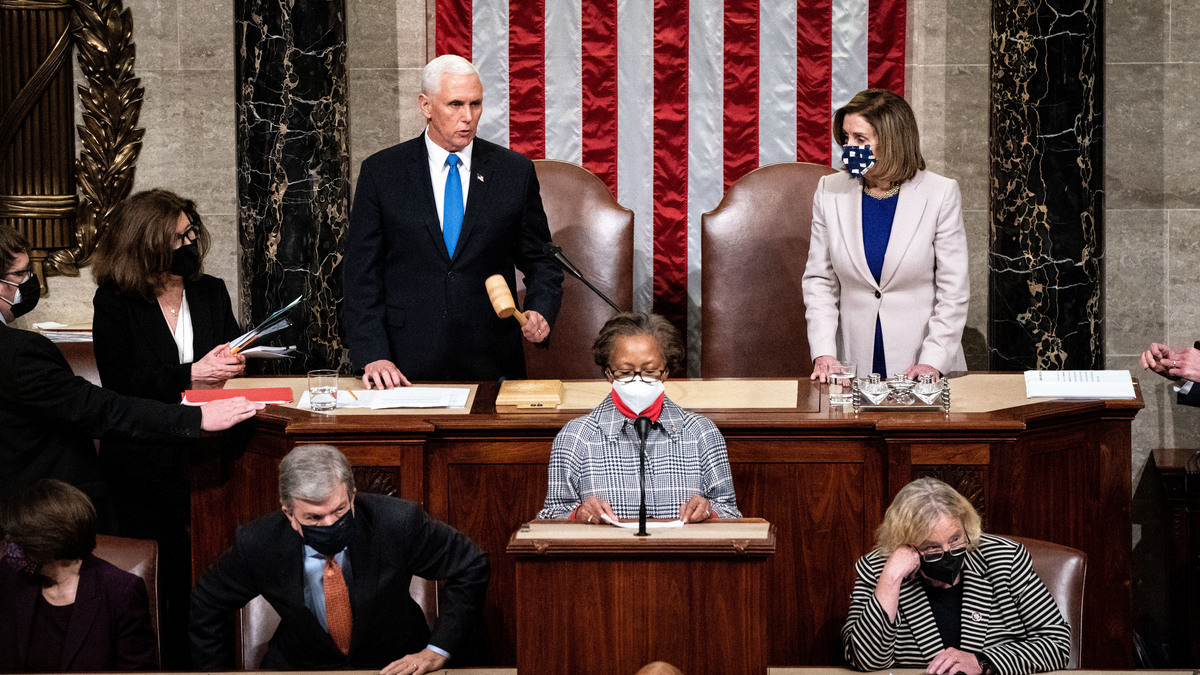 Congress certified President-elect Joe Biden and Vice President-elect Kamala Harris' victory early on Thursday, the end of a long day and night marked by chaos and violence in Washington, D.C. Extremists emboldened by President Trump had sought to thwart the peaceful transfer of power that has been a hallmark of modern American history by staging a violent insurrection inside the U.S. Capitol.

"To those who wreaked havoc in our Capitol today, you did not win," Vice President Pence said once lawmakers reconvened after many spent hours in lockdown. "Violence never wins. Freedom wins, and this is still the people's house."

In a statement released just after the certification was finalized, Trump at long last acknowledged his election loss. He said that even though he disagrees with the outcome, "there will be an orderly transition on January 20th."

"I have always said we would continue our ... fight to ensure that only legal votes were counted. While this represents the end of the greatest first term in presidential history, it's only the beginning of our fight to Make America Great Again!"

Dozens of Republican House lawmakers, along with some Republican senators supportive of Trump, had planned to object Wednesday to the electoral votes of as many as six states that backed Biden.

But late Wednesday night, some Senate Republicans withdrew their objections. Each objection requires the backing of a member of both the House and the Senate to be considered. Sens. Steve Daines of Montana, Mike Braun of Indiana and Kelly Loeffler of Georgia all said that they would stand down.

"I cannot now, in good conscience, object to the certification of these electors," Loeffler said Wednesday, drawing applause from some of her colleagues. Loeffler was one of two Republicans who lost their races on Tuesday, giving Democrats control of the U.S. Senate.

Missouri Republican Sen. Josh Hawley, who took up Trump's call that lawmakers object to the results of the election, said Wednesday night that the Senate should consider his objections, but that they should be debated "without violence, without attacks, without bullets."

Election Officials Warned 'Someone's Going To Get Shot,' But That Didn't Stop Trump

Republican House lawmakers also objected to the electoral votes in Georgia, Michigan, Nevada and Wisconsin, but no senator would join in those objections.

"In that case, the objection cannot be entertained," Pence said repeatedly, chairing the proceedings in his role as president of the Senate.

How the chaos unfolded

The process to affirm Biden's victory began in the early afternoon. The typically ceremonial affair, an affirmation of the democratic process, was expected to be a bitter, hours-long endeavor because of objections planned by Trump's congressional allies, despite the fact that they were certain to be met with bipartisan defeat.

But as the process began, a mob of pro-Trump extremists stormed the Capitol on Wednesday afternoon, bringing the counting of the electoral votes to a halt.

Lawmakers were evacuated from the building as the violent, chaotic scene played out, prompting a citywide curfew. One woman was killed by a Capitol Police officer in the Capitol. Wednesday night, D.C. police said three other people died from medical emergencies in the surrounding area.

Around 8 p.m. ET, hours after the Capitol was breached, lawmakers were cleared to return to finish debate and tally the Electoral College votes. In separate speeches in their respective chambers, House Speaker Nancy Pelosi and Senate Majority Leader Mitch McConnell vowed to press ahead with the business at hand.

"We will not bow to lawlessness or intimidation. We are back at our posts," McConnell said, adding, "and we're going to do it tonight."

The scene that unfolded at the Capitol on Wednesday was the culmination of months of efforts by Trump and his allies, publicly and privately, to overturn the results of the 2020 election. Some of those efforts were based on unproven claims of fraudulent vote counts, while others were founded on baseless conspiracy theories.

Trump had been particularly focused on Pence's role, publicly ratcheting up pressure on his vice president in recent days — including as he addressed supporters on Wednesday — to back his efforts to reverse the 2020 election results. Pence, though, said Wednesday that he did not have the power to change the outcome of the election or to unilaterally delay the certification of Biden's victory.

And the insurrectionists that disrupted the certification of the Electoral College votes did so after Trump spoke to them, demanding that they fight to "stop the steal" of the election — a false claim — and descend on the Capitol.

Congress Reconvenes After Pro-Trump Mob Brings Chaos To The Capitol

As the mob drew down on the Capitol, Trump remained largely silent and did not make widespread remarks condemning the violence, or attempts to quell it. At one point, he tweeted a short video in which he repeated claims — without evidence — regarding voter fraud and a stolen election, while saying "we love you" to the mob that had descended on Washington and urging them to go home.

Later Wednesday, he tweeted that "these are the things and events that happen when a sacred landslide election victory is so unceremoniously & viciously stripped away from great patriots who have been badly & unfairly treated for so long."

Condemnation of the president

For his part, Biden called on the president to direct his supporters to end what he described as an "unprecedented assault" on democracy that "borders on sedition."

"I call on President Trump to go on national television now to fulfill his oath and defend the Constitution and demand an end to this siege," Biden said in brief remarks. The president-elect also suggested that Trump was to blame for the violence, saying that "at the best, the words of a president can inspire. At their worst, they can incite."

As the chaos unfolded, some House Democrats have called for impeaching the president again during his final two weeks in office.

Rep. Ilhan Omar of Minnesota wrote on Twitter that she was drawing up articles of impeachment. "We can't allow him to remain in office, it's a matter of preserving our republic," she wrote. Rhode Island Rep. David Cicilline faulted the president for the violence that consumed the Capitol and said, "We should impeach and convict him tomorrow."

Trump also faced critics within his own party for his role in egging on the mob.

"What happened today was nothing short of a coup attempt. The President of the United States has been lying to his supporters with false information and false expectations," Pennsylvania Rep. Brian Fitzpatrick said in a tweet. "He lit the flame of incitement and owns responsibility for this."

And Arkansas Sen. Tom Cotton said that it's "past time" for Trump to "accept his defeat, quit misleading the people, and repudiate mob violence."