Accessibility links
Faith Leaders Condemn Assault On Capitol President Trump has had the support of evangelical Christians throughout his presidency, but his incitement of the assault on Congress has proved costly. 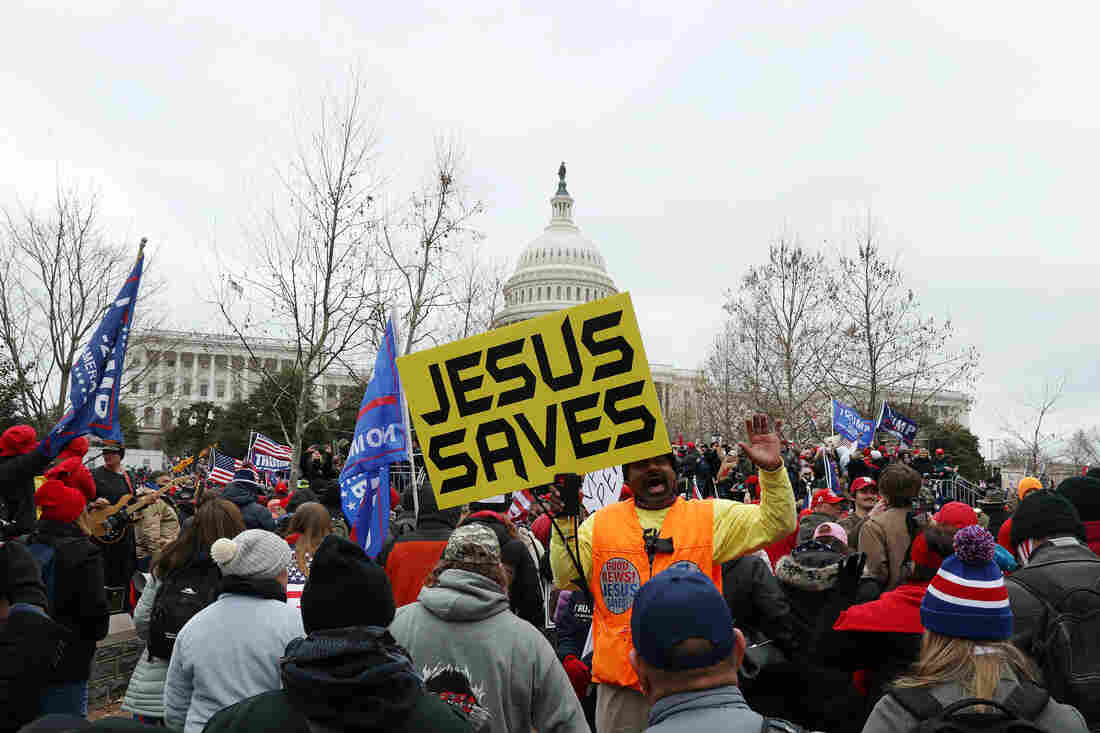 A yellow banner that reads "JESUS SAVES" stands out in the pro-Trump mob outside the U.S. Capitol on Wednesday. Tasos Katopodis/Getty Images hide caption 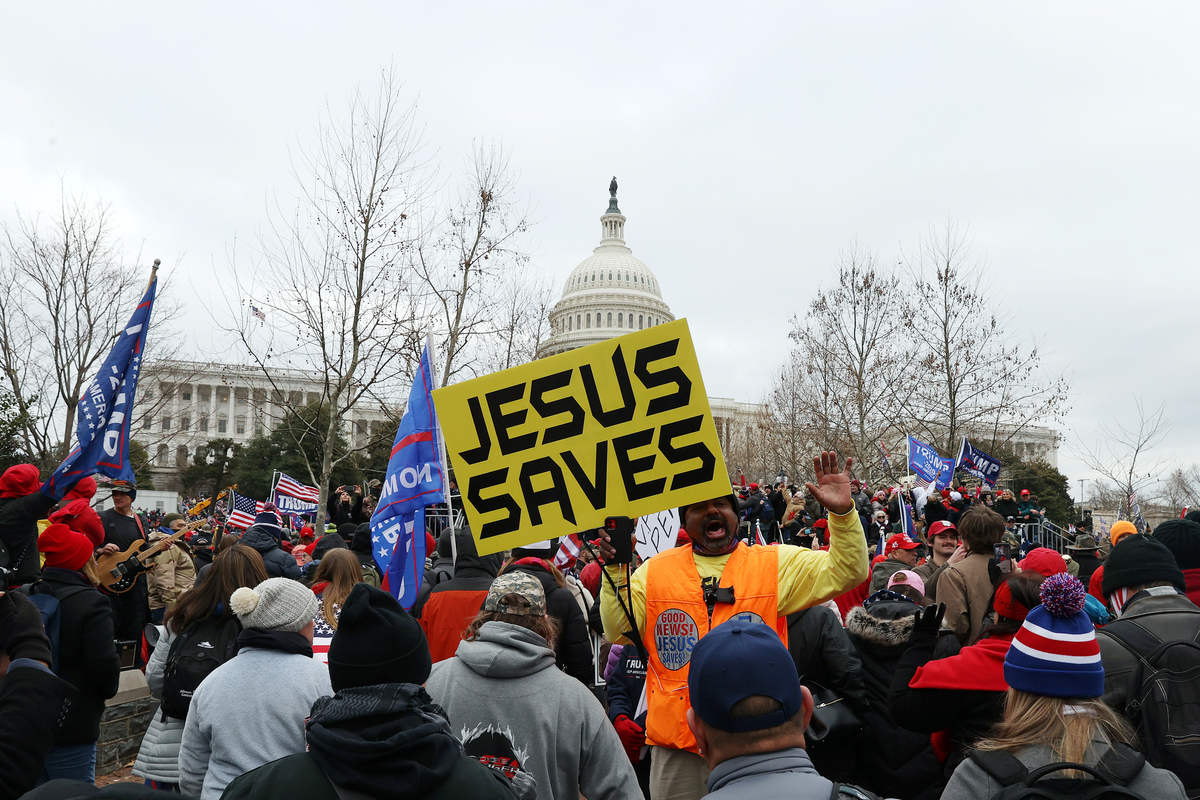 A yellow banner that reads "JESUS SAVES" stands out in the pro-Trump mob outside the U.S. Capitol on Wednesday.

As the pro-Trump mob stormed up the steps of the U.S. Capitol on Wednesday, a big yellow banner stood out among the blue Trump flags carried high by the throng: "JESUS SAVES." Nearby was another, with an even stranger message — "JESUS 2020" — as if the Lord himself had been a candidate in the disputed election.

Christian nationalism was one of the underlying themes of the nearly all-white insurrection at the Capitol, which also featured symbols of the Confederacy. For Robert P. Jones, CEO of the Public Religion Research Institute, the event represented an "unholy amalgamation of white supremacy and Christianity."

The connection was not surprising given the strong support for President Trump among white evangelicals. Most of the U.S. senators who objected to the certification of the Electoral College results for President-elect Joe Biden identify strongly with the conservative evangelical movement, and some evangelical Christian leaders have been prominent in the promotion of baseless allegations of widespread election fraud.

Among the attendees at the pro-Trump rally that preceded Wednesday's attack on the Capitol was Jack Hibbs, senior pastor at Calvary Chapel in Chino Hills, Calif. Though Hibbs did not participate in the storming of the Capitol, his condemnation of the violence was somewhat equivocal.

"This is what you get when you eject God from the courts and from the schools," Hibbs told Family Research Council president Tony Perkins, speaking on Perkins' radio show. Perkins himself, an ordained minister, had been among those who called for state legislatures to reject pro-Biden electors.

On his show, however, Perkins recognized that the violence at the Capitol tainted Christian involvement in the pro-Trump movement.

"I would be hard-pressed to find Bible-believing Christians that would be OK with what took place at the Capitol," Perkins said. "I think this sets us back in terms of addressing the concerns that endanger our republic."

Other evangelical Christian leaders were far more outspoken in their rejection of the attack on the Capitol and more willing to blame President Trump.

"I don't know the Jesus some have paraded and waved around in the middle of this treachery today," tweeted Beth Moore, well known in evangelical circles for her Bible studies. "They may be acting in the name of some other Jesus, but that's not the Jesus of the Gospels."

"It was a moral abomination incited by the president," said Russell Moore (not a relation), president of the Southern Baptist Convention's Ethics and Religious Liberty Commission, speaking Thursday to a group of religion journalists.

"Enough is enough—and indeed was enough a long time ago," Moore wrote on Wednesday in a commentary reacting to the day's events. "It will take decades to rebuild from the wreckage in this country. But, as Christians, we can start now — just by not being afraid to say what is objectively the truth. Joe Biden has been elected president."

In a follow-up tweet on Friday, Moore called on Trump to "step down and let our country heal."

Moore has been a regular critic of Trump, but some pro-Trump evangelical leaders broke with the president over his incitement of the attack on the Capitol.

Albert Mohler, president of the flagship seminary of the Southern Baptist Convention, created a stir last year when he announced he would be voting for Trump in spite of not doing so in 2016. Since the election, however, Mohler has been highly critical of Trump's behavior, and he made clear Wednesday that he blamed him for the attack on the Capitol.

"President Trump is responsible now for unleashing mayhem," he said.

In a podcast released Thursday, Mohler said he did not regret his vote, but he clearly distanced himself from the president.

"I do not follow a cult of personality," Mohler said. "I am committed as a Christian to certain moral principles ... that I believe are derived from biblical Christianity. ... But what we saw in Washington, what we heard from the president, not just yesterday but in recent days, is an attempt to subvert the very constitutional order that he took an oath of office to defend."

Other Christian leaders were similarly quick to weigh in on Wednesday's events. Cardinal Blase Cupich, the Chicago archbishop, did not mince words.

"What has been unfolding at the Capitol today should shock the conscience of any patriotic American and any faithful Catholic," Cupich said in a Wednesday statement. "The eyes of the world look on in horror as we suffer this national disgrace. For many months we have witnessed the deliberate erosion of the norms of our system of government. Peaceful protest is a sacred right. ... But violence is its opposite. Violence in the service of a falsehood is worse."

The Rev. Michael Curry, presiding bishop of the Episcopal Church, was similarly outspoken.

"We believe the actions of armed protesters represent a coup attempt," Curry said, according to a roundup of faith reactions by the Religion News Service. "This threatens the integrity of our democracy, the national security of our nation, the continuity of government and the lives and safety of our legislators, their staffs, law enforcement and all who work in the Capitol."

The attack on the Capitol came on the same day a Black Baptist preacher, the Rev. Raphael Warnock, was confirmed as the winner of his Senate race in Georgia. His election victory was, in significant part, the result of political work by Black churches in his state and exemplified the power of Black voters, who deserve much credit for the election of Joe Biden and Kamala Harris.

The refusal of Trump supporters to acknowledge the Biden-Harris victory, and the hateful attack on the Capitol, were seen by some Black leaders as racist reactions.

"What we saw today in the U.S. Capitol was un-American, based on our Constitution, but it was not non-American, because oppressed people have seen this kind of mob violence many times before in this country," noted the Rev. William J. Barber, pastor of the Greenleaf Christian Church in Goldsboro, N.C., and a co-leader of the Poor Peoples Campaign.

Non-Christian faith leaders joined in denouncing the violence at the Capitol. "The very values and rights bestowed by our democracy are degraded and diminished when police officers have to draw their guns to protect our duly-elected officials in the heart of our nation [against] violent protesters, who, by their reckless and dangerous behavior, have inflicted grievous wounds on our nation," said Rabbi Marvin Hier of the Simon Wiesenthal Center in Los Angeles. Hier offered a prayer at President Trump's inauguration in 2017, but he was unsparing in his reaction to the events at the Capitol.

"Nothing, not even the emotional charges of voter fraud in a presidential election, can ever legitimize or excuse such behavior," Hier said. "For as the Talmud warns, 'Pray for the welfare of our government, for without it, man would swallow his fellow."

Criticism of the attack on the Capitol was so widespread among U.S. faith leaders that the Wednesday events may actually set the stage for greater acceptance of a Biden-Harris administration.

Among those taking a softer line on Thursday was Franklin Graham, the son of evangelist Billy Graham and an early and stalwart supporter of Trump.

"The division in our country is as great as any time since the Civil War," Graham tweeted. "I am calling on Christians to unite our hearts together in prayer for President-elect @JoeBiden and Vice President-elect @KamalaHarris, and for the leadership in both parties."

In a previous version of this story, a quote about conservative values was incorrectly attributed to Russell Moore. That quote has been deleted.