Accessibility links
Opinion: Iran Is Escalating Its Nuclear Program. Biden Should Not Rush To Respond Iran has announced new nuclear steps aimed at the incoming Biden administration, but the U.S. has leverage to push back, argues analyst Henry Rome. 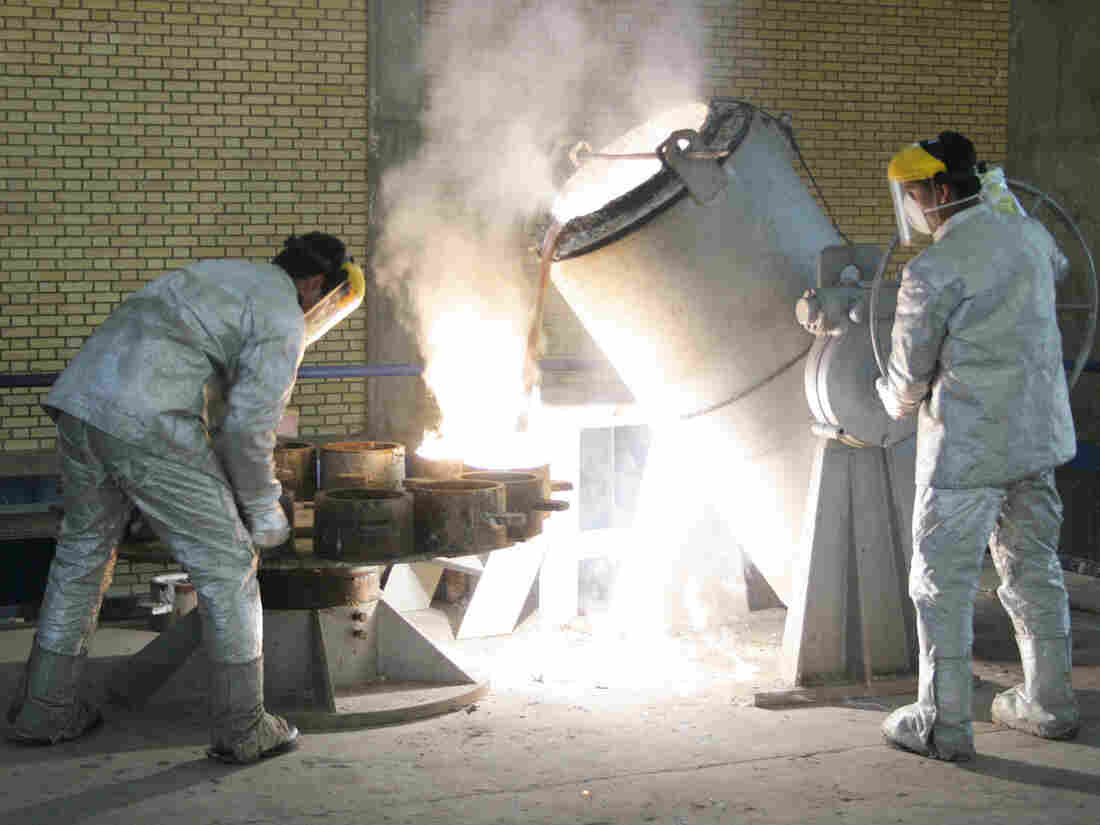 Technicians work inside of a uranium conversion facility producing unit in 2005 outside the city of Isfahan, Iran. After the 2015 Iran nuclear deal put limits on the program, Iran's government has been increasing uranium enrichment since the United States pulled out of deal. Getty Images hide caption 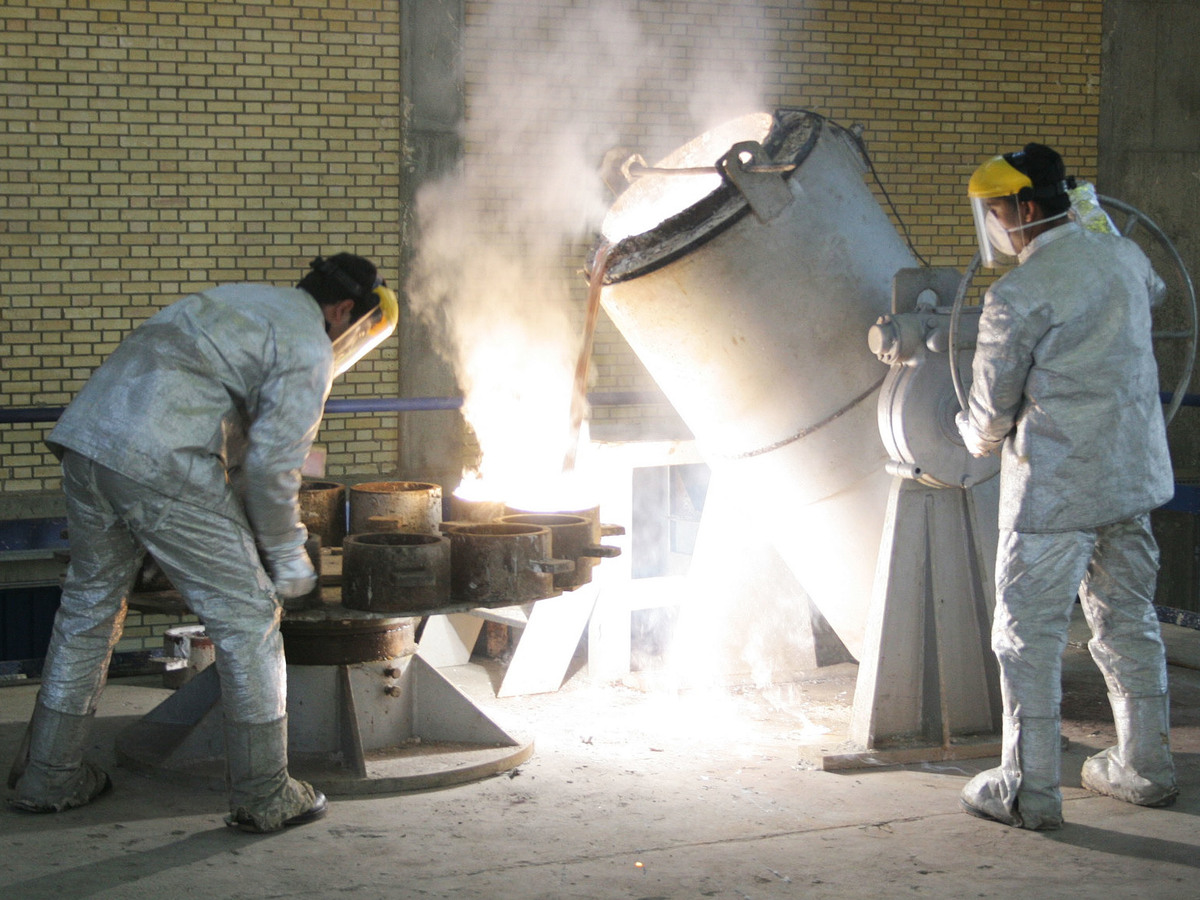 Technicians work inside of a uranium conversion facility producing unit in 2005 outside the city of Isfahan, Iran. After the 2015 Iran nuclear deal put limits on the program, Iran's government has been increasing uranium enrichment since the United States pulled out of deal.

Iran appears intent on generating a nuclear crisis early in Joe Biden's presidency. On Monday, the Iranian government said it began enriching uranium to the 20% level, which is close to the purity used in a nuclear weapon. It is preparing further steps in the coming months, according to a timeline passed by parliament. Iran aims to compel Biden to immediately and unconditionally remove the sanctions that President Trump began to impose three years ago after he pulled the United States out of the Iran nuclear deal. Supreme Leader Ayatollah Ali Khamenei repeated this demand on Friday, calling on the U.S. to lift sanctions on Iran "immediately."

Biden should not play into Iran's pattern of nuclear threats combined with artificial deadlines. Biden and his team will have time — and economic leverage — on their side. The incoming administration should take advantage of its strong position to diligently pursue its goal of strengthening and lengthening nuclear restrictions and should resist the pressure to act hastily.

Biden will inherit significant economic leverage over Iran. However misguided and erratic Trump's approach was toward Iran, the president renewed and strengthened the U.S.'s most comprehensive sanctions regime. Trump failed to convert this leverage into diplomatic progress because he did not have a clear strategy or a realistic path to achieving it. While Trump repeatedly urged Iran to negotiate and "Make the Big Deal," Secretary of State Mike Pompeo's demands for Iran amounted to a call for regime change. Trump also hired John Bolton, an outspoken supporter of regime change, to serve as national security adviser. Tehran had little incentive to talk, let alone offer concessions, to an administration that ultimately sought its surrender or demise.

Biden will flip this logic. The president-elect has outlined concrete diplomatic objectives concerning Iran — including reaffirming the importance of the 2015 nuclear agreement. The nuclear deal, signed by Iran and six world powers, imposed limits on Iran's nuclear program in exchange for international sanctions relief. Biden and his team, which played key roles in securing that agreement when he was vice president, have proved they can negotiate in good faith and keep their word. By taking a more realistic approach, Biden can unlock the power of the leverage Trump accumulated.

U.S. economic might should not be underestimated. Combined with Iran's endemic corruption and the coronavirus pandemic, U.S. sanctions have cratered the Iranian economy, driven up inflation and eroded the purchasing power of average Iranians. The U.S. measures have effectively cut off Iran from the international financial system and targeted key sectors, including energy and manufacturing. Oil exports, Iran's most important source of hard currency, remain largely crippled by the threat of U.S. sanctions. The government has tried to boost the non-oil sector and focus on trade in goods that are not as easy for sanctions to interrupt. But Iranian President Hassan Rouhani's latest budget proposal continues to rely significantly on oil. Budgeting has a habit of focusing minds, and the message from Rouhani's plan could not have been clearer: The long-term stability of the economy depends in large part on relations with Washington.

Tehran will try to prevent Biden from taking advantage of this leverage by creating an atmosphere of imminence and crisis. Even as Tehran reacted to the siege at the U.S. Capitol this week, President Rouhani repeated his call on Biden to lift sanctions, saying, "If you won't fulfill your commitments, we won't bow to you." Tehran's efforts can be divided into three categories.

First, the Iranian president and his aides are urging Biden to move quickly, before Iran's June presidential elections. Rouhani, a relative moderate, is serving his final term. A more conservative leader will likely prevail in the election, potentially creating a window of opportunity to deal with Rouhani on his way out the door. But, as analyst Ariane Tabatabai and I have argued, the impending election will not fundamentally alter Tehran's strategic outlook or its openness to negotiations. Rouhani's successor will not necessarily be more hostile to diplomacy even if he is more anti-American. Washington should not expect that its policies can dictate the outcome of the Iranian election, and it should not allow the election to dictate its own policies.

Opinion: With Biden, America Is Back — But Not At The Head Of The Table

Second, Tehran is trying to create a ticking clock with its nuclear program. The parliament passed legislation that sets up a series of dates when Iran is to take new nuclear steps. The most provocative next step, a significant reduction in international inspector access, is slated for late February. But these deadlines are purely artificial. Iran's nuclear policy is ultimately under the control of Khamenei, not the rambunctious, hawkish parliament or the lame-duck president. Deadlines can and will be fudged depending on the overall political environment.

Third, Tehran continues to bolster its forces and lash out in the region, a not-so-subtle reminder to Biden about its capability to cause trouble. Washington noted with increasing concern last week that Iranian-backed forces were planning to attack U.S. soldiers based in Iraq to mark the anniversary of the assassination of Iranian Maj. Gen. Qassem Soleimani. (Foreign Minister Javad Zarif responded with the bizarre suggestion that "Israeli agent-provocateurs are plotting attacks against Americans" in Iraq.)

On Monday, armed Iranian forces boarded a South Korean tanker and are apparently holding it hostage until Seoul facilitates the release of some $7 billion of Iranian assets frozen in Korean banks. The following day, Iran launched significant exercises with military drones.

But these shows of force may end up being self-defeating, as they turn more countries against Tehran. For example, increased Iranian provocations may push Gulf Arab states closer to Israel, strengthening the agreements normalizing relations between these countries and Israel that were brokered by the Trump administration last year.

Even if Iran does escalate its nuclear program or its provocative regional activity, Biden has tools to deflect the pressure. He plans to strengthen relations with key U.S. allies, including France, Germany and the United Kingdom, which are party to the nuclear agreement. Under Trump, European states spent as much time condemning Washington as they did Tehran. With unity between the U.S. and Europe, new Iranian provocations will only further isolate Tehran. The three European states on Wednesday issued a sharp condemnation of Iran's latest nuclear steps, a sign of future U.S.-European unity. Russia and China, the other signatories to the agreement, will also oppose Iranian efforts to significantly expand its nuclear program. Israel will remain laser-focused on Iran and probably will set clear red lines to box in Iranian activity.

How Biden decides to proceed with Iran will depend in part on his other priorities, as well as the views of U.S. allies. During the presidential campaign and transition, Biden and his aides indicated a desire to bolster the verification provisions of the nuclear deal and extend the duration of its physical restrictions. They have also expressed an intention to conduct broader, regional negotiations. All of these steps will require painstaking multilateral diplomacy. Ultimately, Biden should not feel rushed for these critical negotiations — and he should leverage his sanctions inheritance to advance these objectives.