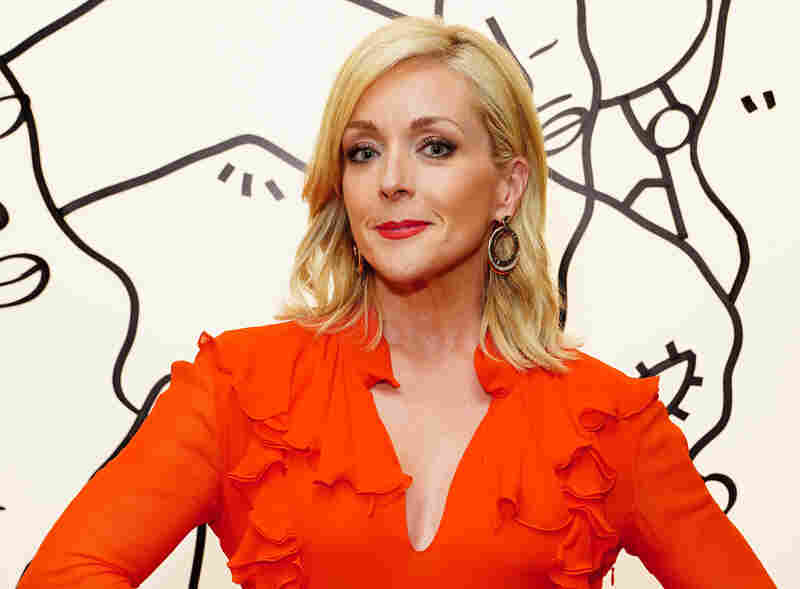 Enlarge this image
Sean Zanni/Getty Images for The Fragrance Foundation 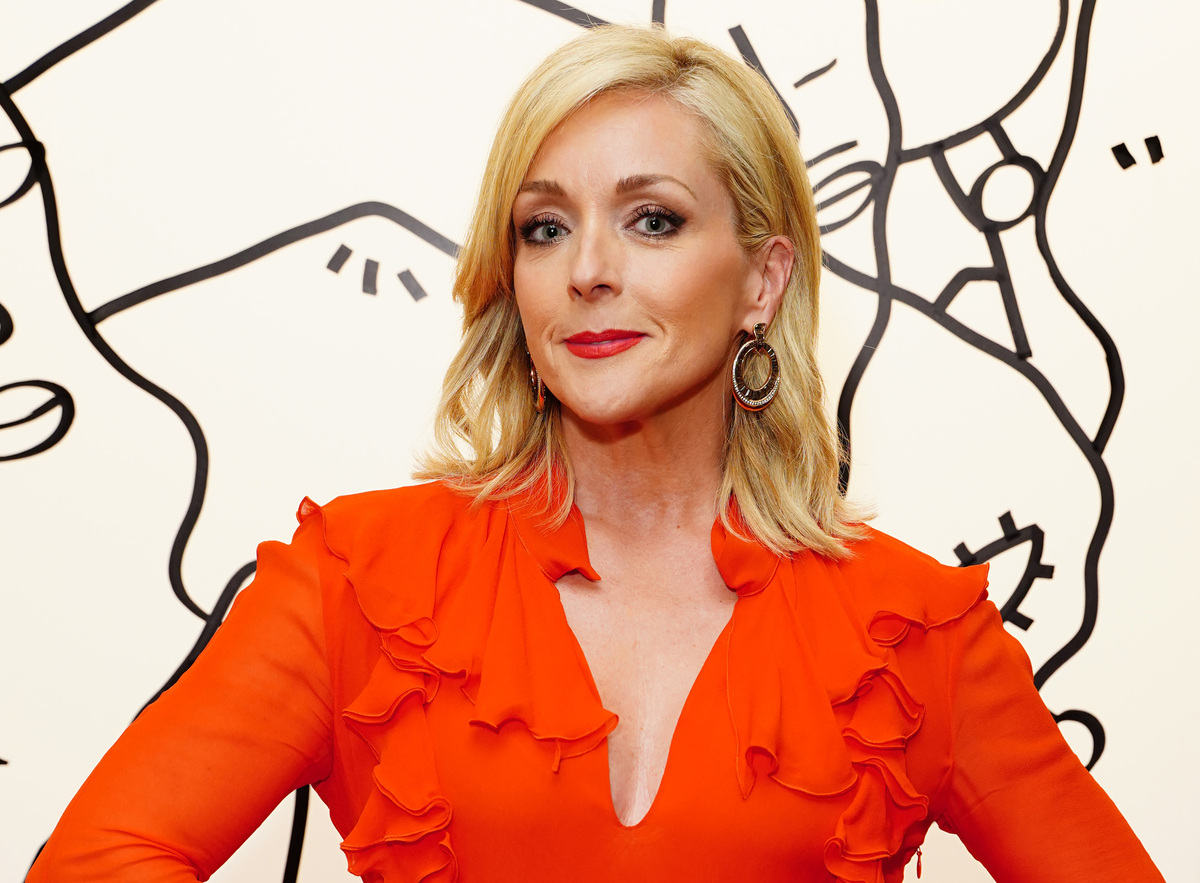 And now the game where we celebrate amazing careers by giving people a thrilling, 10-minute conversation. Jane Krakowski has done almost everything you can do as a performer. She's won a Tony Award on Broadway. She starred in three hit TV series - "Ally McBeal," "30 Rock" and "Unbreakable Kimmy Schmidt." So what world is left for her to conquer? Only to take on the most prestigious job in all of entertainment - game show host. She is the host of the newly rebooted "Name That Tune." She joins us now. Jane Krakowski, welcome to WAIT WAIT... DON'T TELL ME.

JANE KRAKOWSKI: Thank you for having me. I'm so excited to speak with you all today.

SAGAL: So I know you really well from your character on "30 Rock." That's what I see when I look at you. What do most of your fans know you as?

KRAKOWSKI: I mean, I feel like that was a show that - I don't know - was sort of like a little engine that could. Like, initially, we really weren't supposed to be the show that made it on NBC about behind the scenes of a comedy show. In a sense, we somehow made it to a lot of seasons. But what's recently interesting is because it's now on new streaming platforms, there's a whole new generation of younger people who are watching it for the first time. So there's a newfound fun for me to have a whole new younger generation learn about "30 Rock" and ask me if I was that lady.

SAGAL: Which is itself kind of weird because that lady is terrible, which is...

KRAKOWSKI: (Laughter) And, oddly, I'm so proud of it.

SAGAL: As well you should be. I was about to say, it's New York. People try to be sophisticated. So I'm sure what they really do is they come up to you and say, oh, I saw you in previews and "Nine," just so you know.

KIM BOOSTER: Well, that's literally what I was going to ask about because hi, Jane. I'm gay.

KIM BOOSTER: Iconic - I return to it often. And I just have to ask, like, when are you going back to Broadway, when Broadway eventually comes back?

KRAKOWSKI: Right. Well, that's the biggest question - is, when will Broadway come back? I obviously can't wait to come back to Broadway. It's one of my favorite loves. And I sort of describe it - I love doing it so much because you get to do all the things at once. You can sing. You dance. You have to do it all at one time. And I think it's one of the few platforms we could get that.

And to be honest, one of the reasons I wanted to do "Name That Tune" was to perform again in front of a live audience. And I've always loved sort of the rollercoaster ride, the discipline of the theater and all that it takes to be in front of a live audience and do a show from start to finish, head to toe, doing all things at once between 8 and approximately 10:45 at night.

SAGAL: So let's talk about "Name That Tune." This is a TV show, an old game show that's so old that I remember watching it as a child. And, of course, if you don't know, the idea is contestants see how quickly they can name a tune. Did they come to you and say, we're redoing this, and we want you to host it?

KRAKOWSKI: Yeah, they did. And I thought it'd be super fun. It also came at a time where there was no live theater, right?

KRAKOWSKI: There was no possibility of performing live. And the only way we could film it in time through our corona, COVID times was to go to Australia to film it.

SAGAL: I was not aware of this.

KRAKOWSKI: An iconic American game show has just been filmed in Australia.

SAGAL: So did you import everybody - so everybody, you and...

SAGAL: You and your co-host, who's the musician Randy Jackson. And did you have to bring, like, the American contestants, as well?

KRAKOWSKI: They did. All the contestants are American. Everybody quarantined. And I think it's how Randy and I really bonded because I've never met the Randy Jackson before - just a fan from TV. And because we were taken on this very, I mean, full-on journey to go all the way to Australia and taken on this anonymous bus by the government and then locked in a room where they don't give you a key. And I was, like, wait.

KRAKOWSKI: We don't get a key to our own hotel room? And they're, like, well, you can't leave, so there's no way you need to get back in. And I was, like, got it.

KRAKOWSKI: And, you know, there's guards outside every single hotel room. And so we would sort of have phone calls every day - just, like, signs-of-life phone calls - what are you ordering for dinner? - maybe.

SAGAL: How long did you have to live like that before they let - released you to host your television show?

SAGAL: That's why the opening of the pilot episode is just 15 minutes of you kneeling and kissing the floor and weeping.

SAGAL: Oh, my God. We can talk to each other. We can see.

KRAKOWSKI: And you can imagine the contestants - they've been locked up for 14 days. They get out.

KRAKOWSKI: They get 22 minutes to win some money. And they'd be, like, what is it? I know this song. It's nice.

DICKINSON: So, Jane, there's a tiny arc in "30 Rock" where you play the meanest-ever judge of a singing show.

SAGAL: I'm actually glad Amy brought that up because on that episode, you were, as that character, terrible. And one of the things I love about "30 Rock" is how, frankly, awful and hilariously awful your character is. You're always being shallow, vain.

SAGAL: Was that fun?

KRAKOWSKI: Yes. When it's written by Tina Fey and Robert Carlock, yes. And I think they made sort of their own farcical land that was "30 Rock" that lived in this world of NBC that - Jenna and Tracy could get away with almost anything because they knew nothing. And so you almost forgave them for their horrificness (ph) because they were so ignorant - I hope.

SAGAL: Yes, I forgive you.

KRAKOWSKI: (Laughter) I mean, they set her up so well. Like, she tells you that - when they're talking about high school reunions, she's, like, well, I'd go to my reunion, but the boat I was educated on sank.

DICKINSON: I love that.

KRAKOWSKI: You know, they're giving you a lot of clues - first of all...

KRAKOWSKI: She wanted to prove who was the sluttiest. And when she graduated two weeks later, she showed them. She showed them all.

KRAKOWSKI: There are some questions you never ask.

KRAKOWSKI: Because I worked with her again in "Unbreakable Kimmy Schmidt" as another character who really was not fully functioning in the world, either.

KRAKOWSKI: And I sort of - I just don't - she writes me these amazing characters and incredible comedy and some of the best lines I'll ever see in my career. And so I love playing the parts she writes for me, but I'm not sure why she thinks I'm perfect for these roles.

SAGAL: Jane Krakowski, it is a joy to talk to you. But we have, in fact, invited you here to play a game that we're calling...

KRAKOWSKI: I actually pitched a show for Discovery called "Maim That Tuna."

SAGAL: Yes. We are going to ask you three questions about tuna because you are the host, of course, of "Name That Tune." Get two right - you'll win our prize for one of our listeners - the voice of anyone they may choose on their voicemail. Bill, who is Jane Krakowski playing for?

SAGAL: All right. Ready to do this?

SAGAL: No, you can do this. Here we go. Here's your first question. Now, Ernest Hemingway loved to fish for tuna, but his methods were unusual. He was known to do which of these whilst angling? A, wear down a fish's ability to fight by bringing it close enough to box with it; B, using a machine gun; or C, getting drunk because he said, quote, "If you want to think like a fish, drink like a fish."

KRAKOWSKI: I'm going to go with C because I think he was such a bold drinker.

SAGAL: He was, in fact, a very serious drinker, but apparently not so much when he was fishing. He used a machine gun.

KRAKOWSKI: Times were different then.

SAGAL: All right. You have two more chances.

SAGAL: We've all had tuna melts, tuna sushi, various tuna dishes. But if you really want to explore the world of tuna, you have to try what rare delicacy? A, the national dish of Guatemala, the tuna apple turnover; B, Cuba's tuna a la Hemingway, in which raw tuna is shot into your mouth with a machine gun...

SAGAL: ...Or C, tuna tears, a cocktail served in South Korea made with fluid from the eye of a tuna.

SAGAL: ...But it's real. Very good. If you get this last one right, you win it all. The most famous tuna is Charlie, the mascot for Starkist Tuna. Starkist has tried to give Charlie some friends in those advertisements. Which of these was a real character that didn't catch on? A, a millennial gamer tuna as part of a 2015 brand reboot; B, a sexy lady tuna who was invented to promote their premium light tuna brand; or C, Charlie's college roommate, a Marxist sardine who keeps telling Charlie his boss is just planning to kill and eat him.

KRAKOWSKI: These all sound like bad advertising ideas. I think I'm going to go for B.

SAGAL: You're going to go for B. Yes, the answer is B.

SAGAL: It's a sexy lady tuna.

SAGAL: Her name was Premia. She looked as if Jessica Rabbit was a blonde fish. It didn't last long.

SAGAL: Bill, how did Jane Krakowski do on our quiz?

KRAKOWSKI: I got through high school with a little help from a friend.

SAGAL: Jane Krakowski is an award-winning actress and singer. She is also the host of Fox's "Name That Tune," which now airs every Wednesday. Catch it then. Jane Krakowski, what an absolute joy to talk to you. Thank you so much for joining us.

KRAKOWSKI: It's been such a joy to talk with all of you. Thank you for having me. Let's do it again soon.

SAGAL: Absolutely. Thank you so much. Take care. Bye-bye.

KRAKOWSKI: (Singing) My muffin top is all that, whole grain, low-fat. I know you want a piece of that, but I just want to dance.

SAGAL: In just a minute, we work up a sweat during the Listener Limerick Challenge. Call 1-888-WAIT-WAIT to join us on the air. We'll be back in a minute with more of WAIT WAIT... DON'T TELL ME from NPR.

Copyright © 2021 NPR. All rights reserved. Visit our website terms of use and permissions pages at www.npr.org for further information.