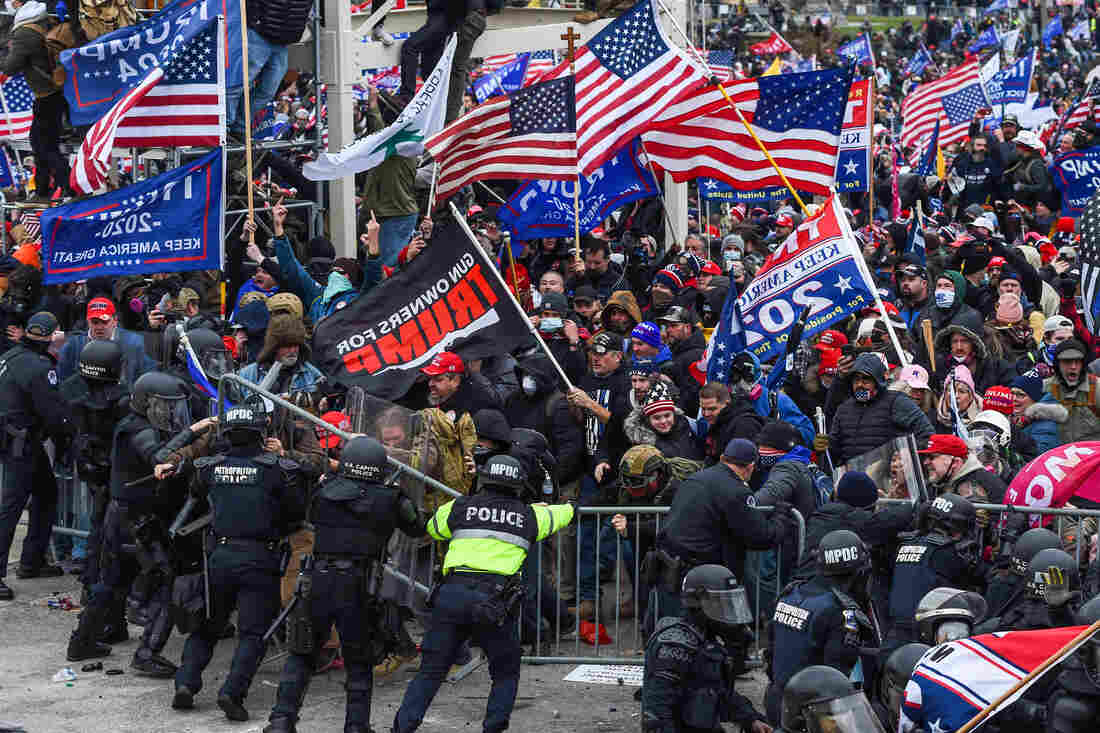 Police and security forces attempt to hold back a mob of pro-Trump extremists as they storm the U.S. Capitol in Washington on Wednesday. Roberto Schmidt/AFP via Getty Images hide caption 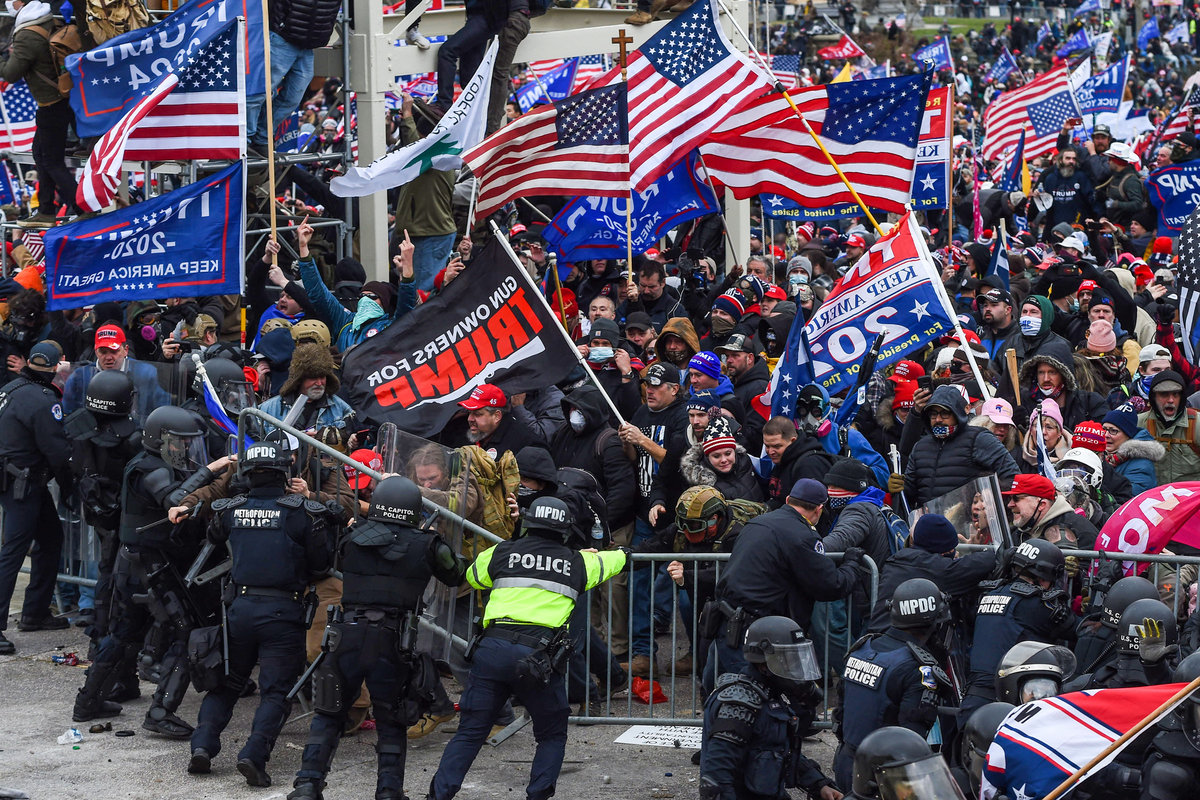 Police and security forces attempt to hold back a mob of pro-Trump extremists as they storm the U.S. Capitol in Washington on Wednesday.

From her couch in Minneapolis, Nuny Nichols watched a mob of largely white extremists stage an insurrection in Washington, D.C., set up a noose on a wooden beam outside the U.S. Capitol and walk a symbol of violence and slavery — the Confederate flag — through the building as they stormed and raided it.

She was angry, but she was not surprised at the way people in the mob laughed as they took things from the building. There were white extremists who felt at ease giving their names to media outlets and taking selfies with a white police officer.

It stood in stark contrast to the way law enforcement handled protests for Black lives this summer in Minneapolis, where Nichols demonstrated.

"People who were just out there to protest — to make sure our voice is being heard — as soon as they were getting even close to a building or even close to a police officer, they were instantly tear-gassing and they were shooting rubber bullets," she recalls.

Meanwhile, she watched this actual mob, incited by President Trump, storm the Capitol with what appeared to be little resistance.

"Now the world gets to see the difference between these two situations, where one is us protesting to be seen, to be heard, to not be killed, right?" she said. "And then you have these other people who are just mad because they lost." 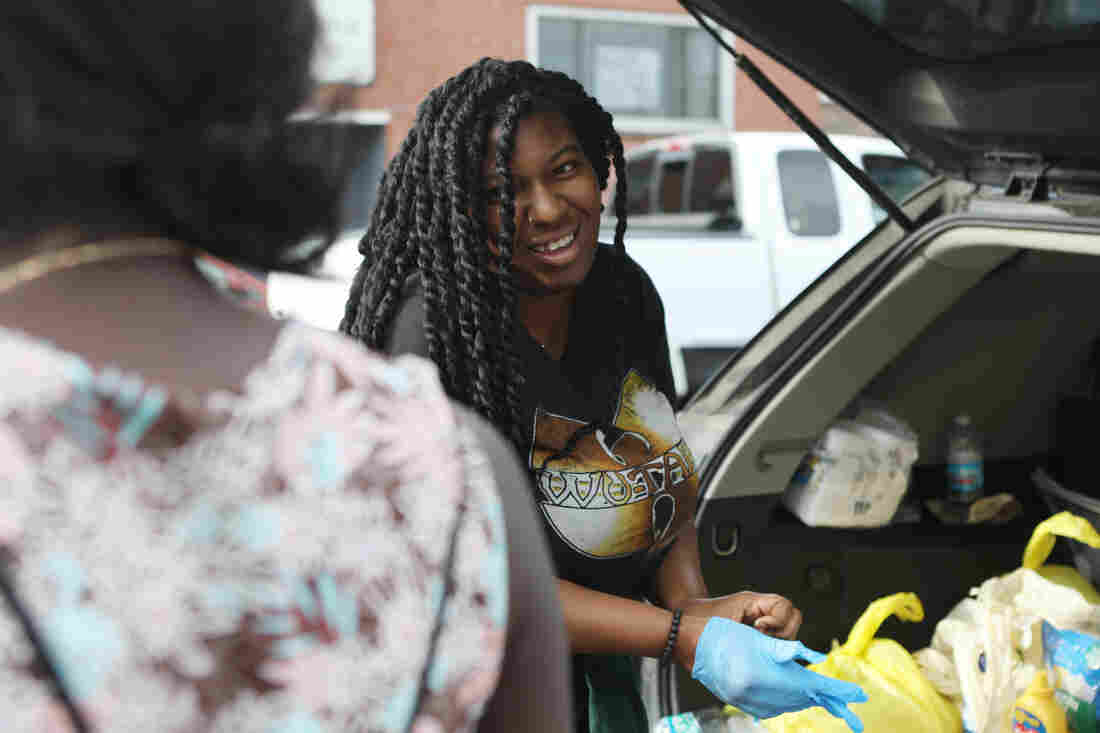 Nuny Nichols prepares free food for people who gathered in June 2020 at the site where George Floyd was killed while in police custody. Jim Urquhart for NPR hide caption 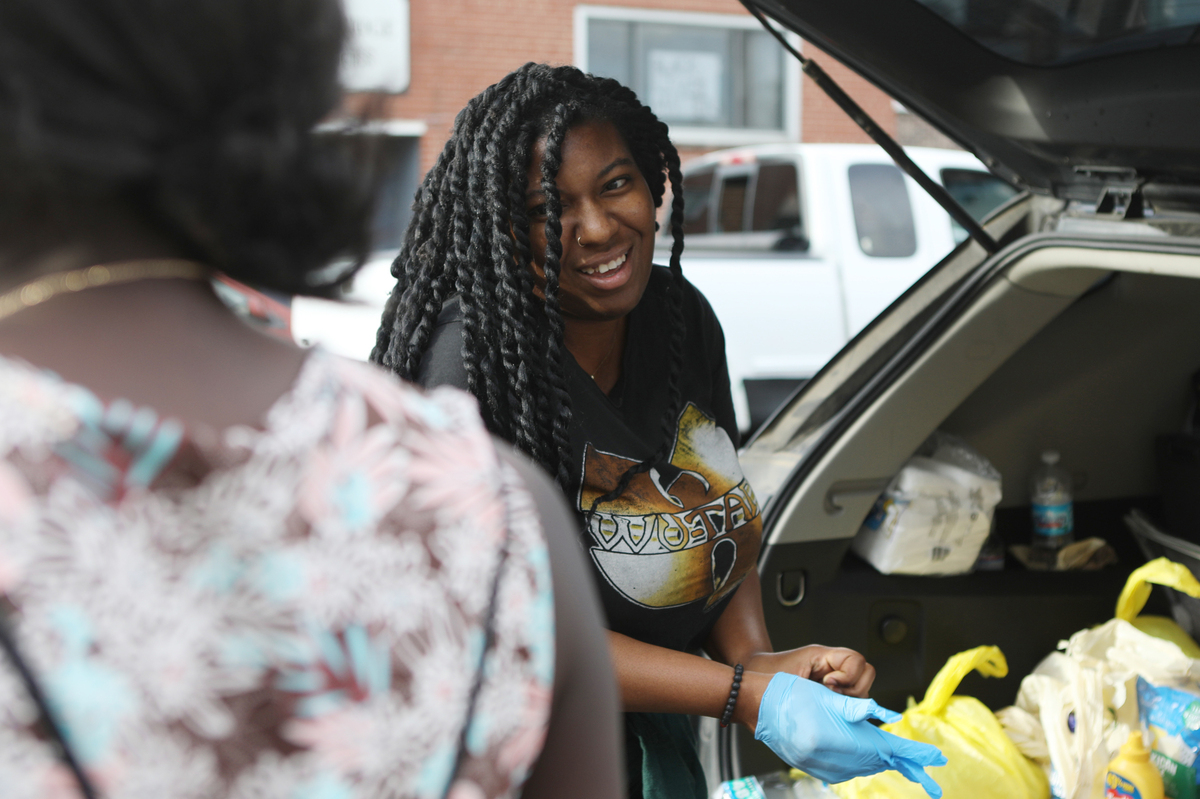 Nuny Nichols prepares free food for people who gathered in June 2020 at the site where George Floyd was killed while in police custody.

The president took a different tone on Wednesday than this summer, when he called overwhelmingly peaceful protesters for racial justice "thugs," "agitators" and "looters." He tweeted, "when the looting starts, the shooting starts." He threatened protesters outside the White House with "vicious dogs" and "ominous weapons."

But when the Capitol was stormed Wednesday, Trump told the extremists threatening to execute Democrats and target journalists and Black Lives Matter activists, "We love you. You're very special ... but you have to go home." Prior to the mob storming the Capitol, he'd told the rally of his supporters to "fight like hell." By the end of the day, one person was killed by a police officer and three others had died. One police officer later died from his injuries. Two pipe bombs were found at the Democratic and Republican headquarters.

Political pundits and elected officials in Washington, D.C., expressed shock that this could happen in the United States. Cries of "this is not what America is" or "no one could have predicted this" were frequent.

These claims made Ash-Lee Woodard Henderson livid. She and others had been sounding the alarm for years.

"Those of us that are Black, brown, Indigenous, AAPI, Southern and rural and that had watched and studied history since the 1800s know that this is actually very, very possible in America," she said. "Just because folks don't believe those of us that come from targeted and marginalized communities doesn't mean that we haven't been predicting this all the while. The South has been saying that white supremacists in elected positions is a dangerous and consequential matter that this country needs to pay attention to."

She's a national activist for the Movement for Black Lives and co-executive director of the storied social justice center the Highlander Research and Education Center, in eastern Tennessee. It sounded the alarm when elected officials were espousing or showing sympathy with white supremacist ideals over the past four years. Its administrative building was set on fire last year, a white power symbol spray-painted on the ground.

"This isn't new," Henderson said. "There are just dots that aren't being connected. And so I felt frustrated that my friends and I survived Charlottesville and said that white supremacist violence was on the rise, that we survived and fought back."

But it felt as if no one was listening to their warnings. All the while, she said, Black organizers and activists were being maligned.

"People like me, Black people who have been doing work to actually put this country in a place where we're practicing our ideals around justice and liberty for everybody, are being designated Black identity extremists, being compared to the same people" who attacked the Capitol, she said. "I felt frustrated. I felt empathy for every targeted and marginalized community in this country that was like, 'God, man, they really clearly treat us differently than they treat white people' and all of the hard feelings that come with that."

That hypocrisy was not surprising, she said.

"It just exaggerated the contradictions to me around how the state and how police respond to Black and Indigenous and Latinx and Asian and Pacific Islander folks when we protest," she said. "Versus how they responded to gun-toting white supremacists that were coming into the Capitol." 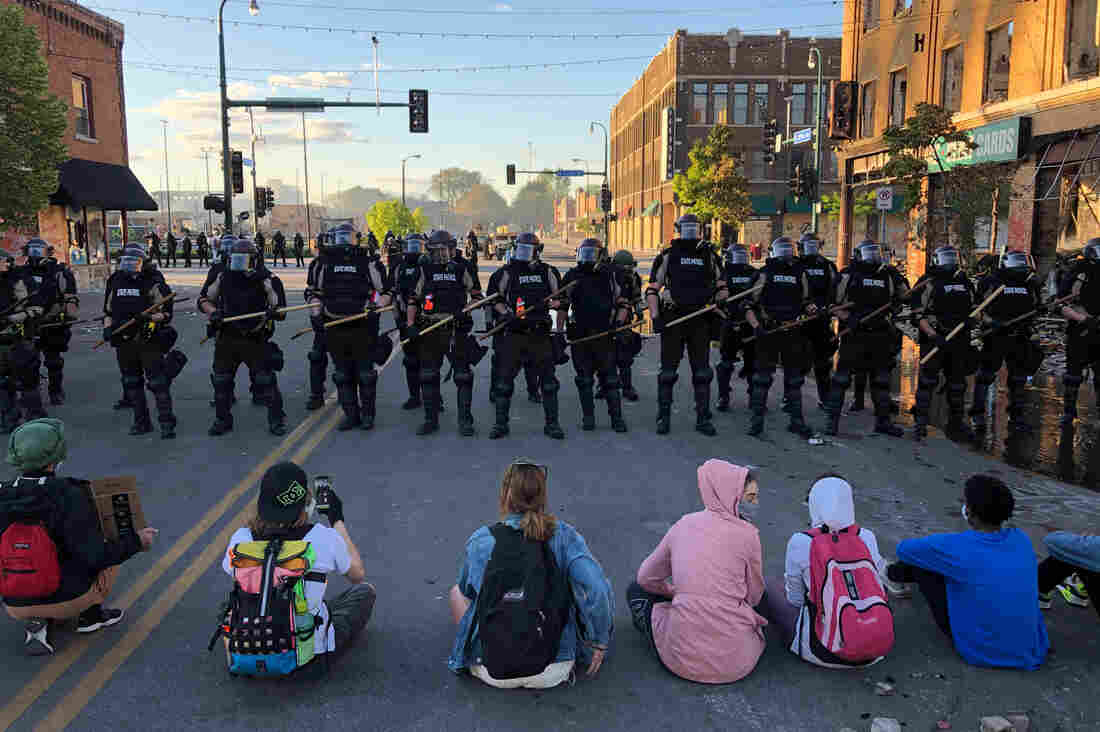 People sit on the street in front of a row of police officers during a rally in Minneapolis last year. Kerem Yucel/AFP via Getty Images hide caption 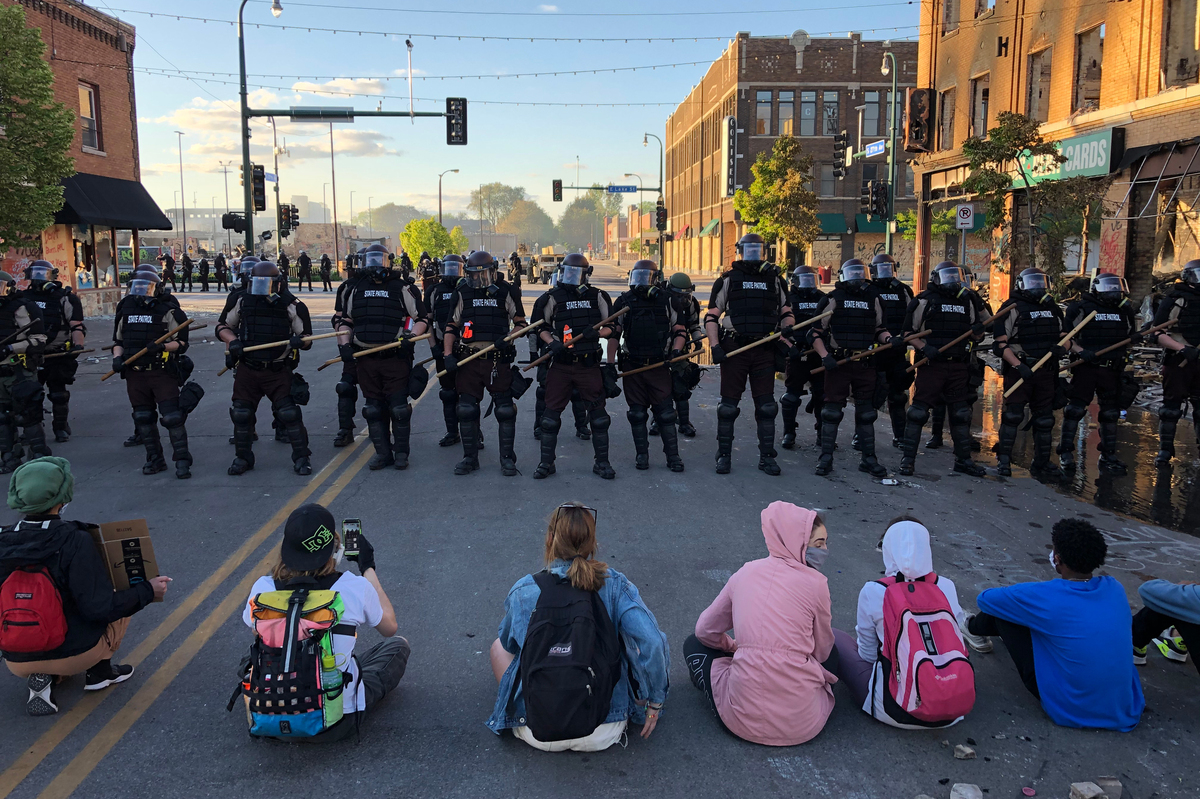 People sit on the street in front of a row of police officers during a rally in Minneapolis last year.

Racism and anti-Semitism were on full display Wednesday, although some in the crowd said they don't subscribe to these sentiments. A newly elected West Virginia lawmaker livestreamed himself storming the Capitol as members of Congress hid for safety. He was later charged with illegal entry, and dozens of others were also later arrested and charged, largely with illegal entry or violating curfew.

For Ashley Howard, a historian and scholar of violent protests and social movements at the University of Iowa, her mind didn't jump to protests over the summer seeking to end oppression and injustice. Her mind jumped further back to the nadir of American race relations, a period of American history from the end of Reconstruction to the early 20th century, when violent force was used to maintain the status quo. African Americans lived through a reign of terror: lynchings, segregation, Jim Crow laws and increasing white supremacy.

Wednesday's attack "was a show of force in service of maintaining a racial and social hierarchy," she said. "We see folks shamelessly, shamelessly livestreaming sieging the Capitol ... so this shows how power is working in our nation, that they are doing so without remorse, without fear of any retribution."

The smiling photographs of white men armed with bats, shields and chemical spray in the Capitol building made her think of the grisly lynching photographs that were taken in the early part of the 20th century.

For Some New Americans, Capitol Attack Was An Echo Of Turmoil They'd Hoped To Escape

"Where people were [posing] in front of the deceased person, smiling, preening for the camera, and then authorities would close the investigation of the lynching and say that it had occurred at the hands of persons unknown, unwilling to name and to hold accountable the people who actually did this," she said. "The fact that the FBI is, in essence, crowdsourcing this investigation really to me calls to mind these kind of earlier moments of terror in our history."

Meanwhile, she said that the FBI used an elite spy plane, a Cessna Citation jet, to surveil Black Lives Matter protests in Baltimore in 2015 and that police used cellphone-tracking technology. 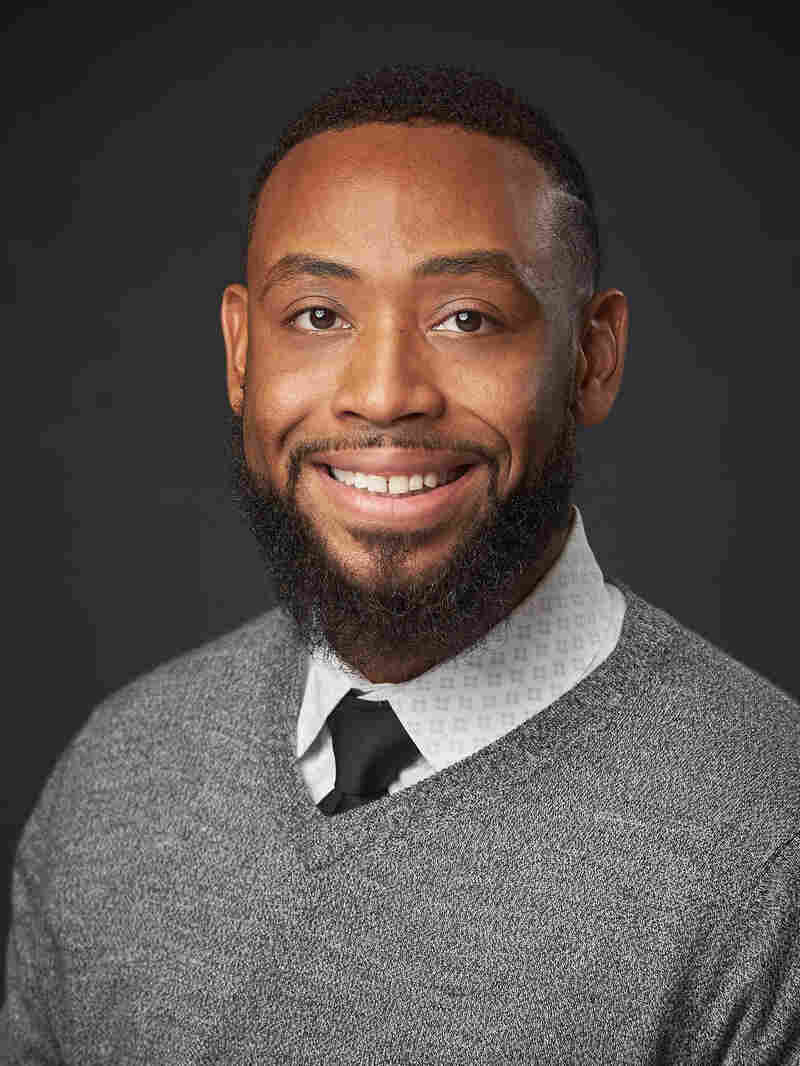 Ron Harris, a Democratic National Committee member, had been organizing for the U.S. Senate wins that were overshadowed by the insurrection in Washington, D.C. Ron Harris hide caption 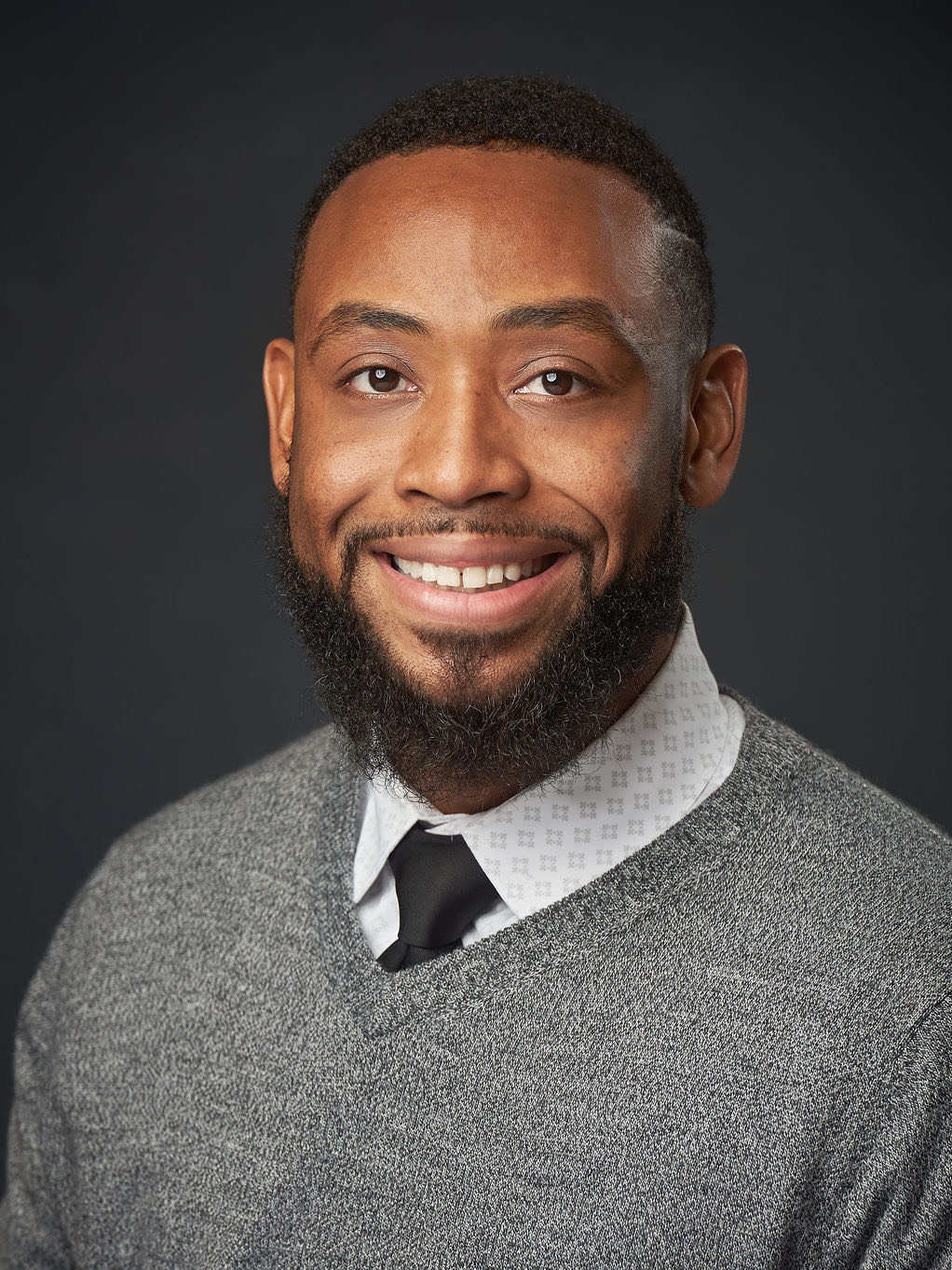 Ron Harris, a Democratic National Committee member, had been organizing for the U.S. Senate wins that were overshadowed by the insurrection in Washington, D.C.

In Georgia, Ron Harris watched with terror and anger on Wednesday. The Democratic National Committee member had been organizing for the U.S. Senate wins that were overshadowed by the insurrection in Washington. Georgia elected its first Black and first Jewish senators in closely contested races in which Democrats flipped the state by turning out Black voters and other voters of color.

"To not even have a day to celebrate that, and then to turn on the TV and see a huge white mob that was incited by the president to then take over the Capitol building, it was frustrating because I've seen people tackled, arrested, pepper-sprayed, tear-gassed, shot with rubber bullets, killed for a whole lot less," he said.

Harris protested in his home city of Minneapolis last summer. And what he saw in Washington, D.C., he says, proves what he and other organizers have been saying: that law enforcement makes choices about how it reacts to people. People of color protesting for social justice are seen as criminals; a mostly white mob attacking the Capitol is seen as demonstrators.

Hannah Allam contributed to this report.