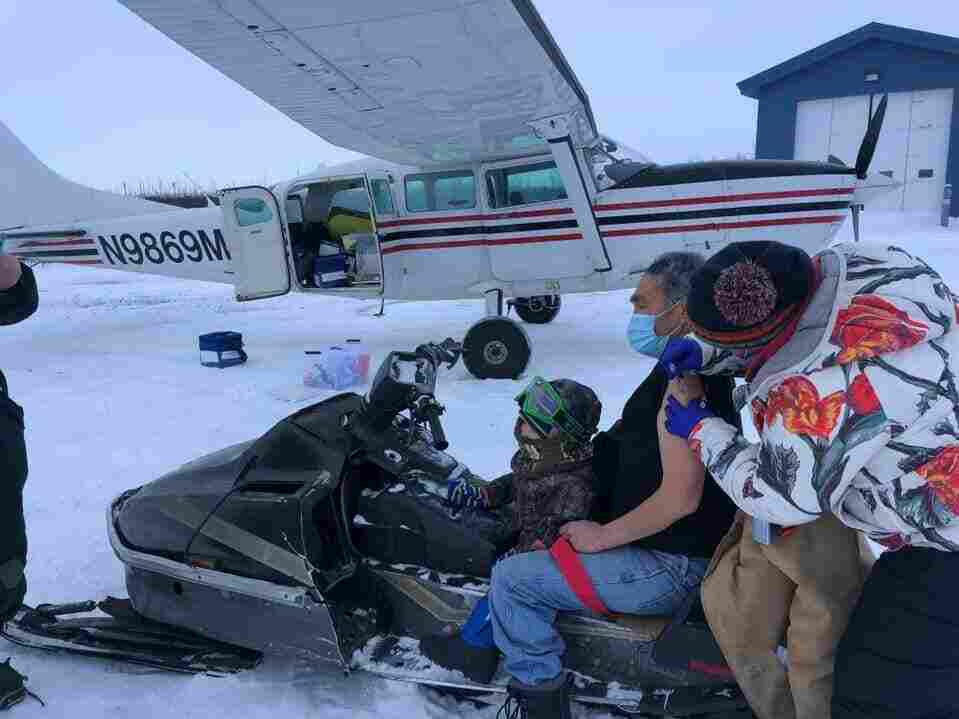 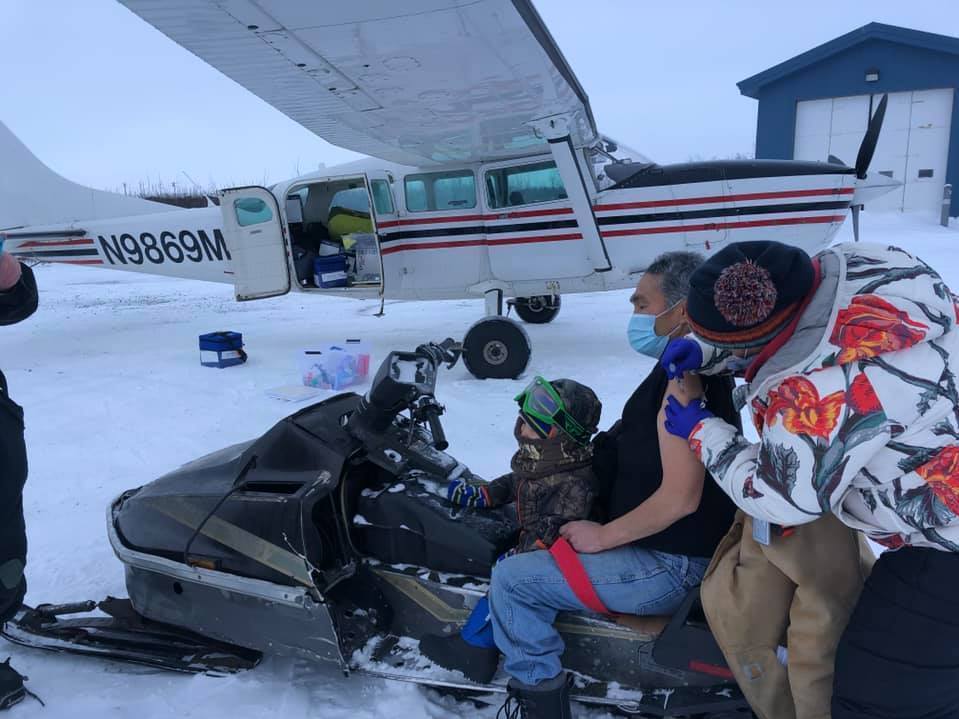 Sarah Lind, a nurse with Yukon-Kuskokwim Health Corp., Southwest Alaska's tribal health care provider, vaccinates James Evan in December. They're standing on the tarmac in the village of Napakiak, where Evan works for YKHC at the clinic.

One of the biggest challenges for distributing the COVID-19 vaccine from drug companies Pfizer and BioNTech is keeping it cold.

But Dr. Ellen Hodges, contending with subzero temperatures on a remote Southwest Alaska airport tarmac last month, had the opposite problem as she prepared to vaccinate front-line health care workers.

"It became immediately apparent that the vaccine was going to freeze in the metal part of the needle," she said. "It was just kind of wild."

Distributing the COVID-19 vaccine is hard enough in rural Lower 48 states, where challenges include long drives and limited access to the ultracold freezers needed to preserve doses.

Rural Alaska's obstacles are at another level. Dozens of remote villages lack any connection to roads or hospitals, and ultracold freezers are essentially nonexistent.

Those problems, however, have not thwarted the vaccine's delivery. Instead, bolstered by special shipments for Alaska Native tribes, providers have mobilized a massive effort that's delivering thousands of doses to remote parts of the state.

A fleet of chartered plans has airlifted vials to villages. A water taxi drove doses through choppy seas. And in a nod to the Serum Run that delivered lifesaving diphtheria treatment to Nome a century ago, some of the clinicians giving shots in rural Alaska were even shuttled around villages on sleds pulled behind snow machines.

Those efforts have helped give Alaska one of the highest vaccination rates in the country with rural and Indigenous residents getting access to shots at levels that meet or even exceed those in Alaska's cities. Public health experts say that's appropriate because of tribes' federally recognized sovereignty and because COVID-19 has hit rural areas and Alaska Native people especially hard.

"One thing that a lot of us feel when we live and work out here is that we're a little bit forgotten," said Dr. Katrine Bengaard, one of the sled-borne rural Alaska vaccinators. "But with the way that this COVID vaccine has been distributed, we don't feel forgotten at all."

As in the rest of the country, Alaska's vaccine rollout has not been entirely smooth, with reports of computer problems and limited appointments as access expands beyond health care workers to the state's older residents.

But the rural vaccine effort has been a bright spot, offering Alaskans an array of inspiring anecdotes about what many hope could be the first steps toward ending the pandemic. Some 3% of Alaskans have received shots so far, trailing only West Virginia, the Dakotas and Vermont.

On windy Kachemak Bay, about 100 miles southwest of Anchorage, Curt Jackson used his 32-foot aluminum landing craft, the Orca, to ferry nurses and a load of vaccine to the village of Seldovia through heavy seas and a huge tide.

We laughed and joked about our Alaskan winter commutes... pic.twitter.com/nkZgHOxhPy

"It was definitely kind of creeping along on eggshells as we're slamming through these waves, trying to be as careful as possible, knowing there's this super special cargo on board," Jackson said. "It's been a rough year, like, I'm not going to lie — I got choked up realizing this was like this first little step towards victory."

In Northwest Alaska, meanwhile, just north of the Arctic Circle, Bengaard and her colleagues would fly into villages on tiny bush planes, then be picked up at the airport by residents who used snow machines to pull them into town by sled.

"Our job was to keep ourselves, as well as all of our luggage, in the sled as we bounced along through the snow," she said.

Bengaard and her team performed most of their vaccinations at village clinics. But for a few elders who couldn't make it, they also paid home visits to deliver shots.

One went to a 92-year-old woman who Bengaard said grew up fearing a pandemic after her parents lived through the 1918 flu, which decimated Alaska Native villages.

Hodges, the doctor with the frozen needle, is chief of staff at Southwest Alaska's regional tribal health provider, Yukon-Kuskokwim Health Corp., and she helped plan vaccine distribution flights to some three-dozen villages. The effort was branded Operation Togo, a reference to one of the sled dogs that helped carry diphtheria serum to Nome in 1925.

Hodges said she asked to be on one of the first flights because she was thrilled for the chance to bring protection to villages' front-line health aides, who have been at the "tip of the spear" during a pandemic that's hit the region hard.

"I could hardly sleep the night before we went out," Hodges said. "I was so excited."

Before Hodges reached each village, her organization made sure that everyone eligible to be vaccinated was there to meet her plane on the tarmac when it arrived.

Patients came on their snow machines and four-wheelers, or sometimes in a truck. After getting their shots, they'd wait 20 minutes to ensure they didn't suffer allergic reactions; then the vaccinators would fly to the next village.

Hodges flew with the Pfizer vaccine in her lap for safekeeping. And she solved the problem of the freezing needle by keeping doses tucked in her shirt until just before injecting them.

"Once we got that sorted out, it was pretty great," Hodges said. "A lot of us felt the importance of it — of making sure we could get our health aides protected against this horrible, unpredictable disease."

Along with allocations to the Bureau of Prisons and Department of Defense, the Trump administration set aside what it's calling "sovereign nation supplement" vaccine shipments to tribal health organizations. In Alaska, that's allowed tribes to race ahead of the state government in distribution.

In many rural, Indigenous parts of the state, older residents and front-line essential workers have been able to access shots before those in Alaska's cities. (Tribal providers stress that they're using their doses to vaccinate both Indigenous and non-Indigenous people.)

Tribes also have the authority to make their own decisions about whom to prioritize in their vaccinations.

While most have hewed to federal recommendations, tribal leaders in one Yukon River village decided to set aside nearly all of its first 10 doses for elders and people with chronic health conditions — but they also left one for a speaker of the Gwich'in language, which has just a few hundred speakers left in the United States.

Another Indigenous elder who received a vaccine delivered by plane was Donny Olson, 67, who lives in the remote Western Alaska village of Golovin.

Olson is Iñupiaq, a state senator and a father of six, including young twins. He's also a pilot, and he has a radio at his home so he can listen to air traffic as it approaches.

When he heard the plane carrying the vaccine call in its approach, Olson said, "you could breathe a little easier that they're here, that bad weather's not going to stop them from coming."

"And when they landed, and I got the steel treatment in the shoulder, that was a great relief for us, as a whole family," he said.