Accessibility links
Twitch Streamers Go To Dr. K For Help With Mental Health Issues Dr. Alok Kanojia, known as Dr. K, is a Harvard-trained psychiatrist specializing in addiction. He addresses mental health issues within the Twitch audience, which is largely made up of gamers. 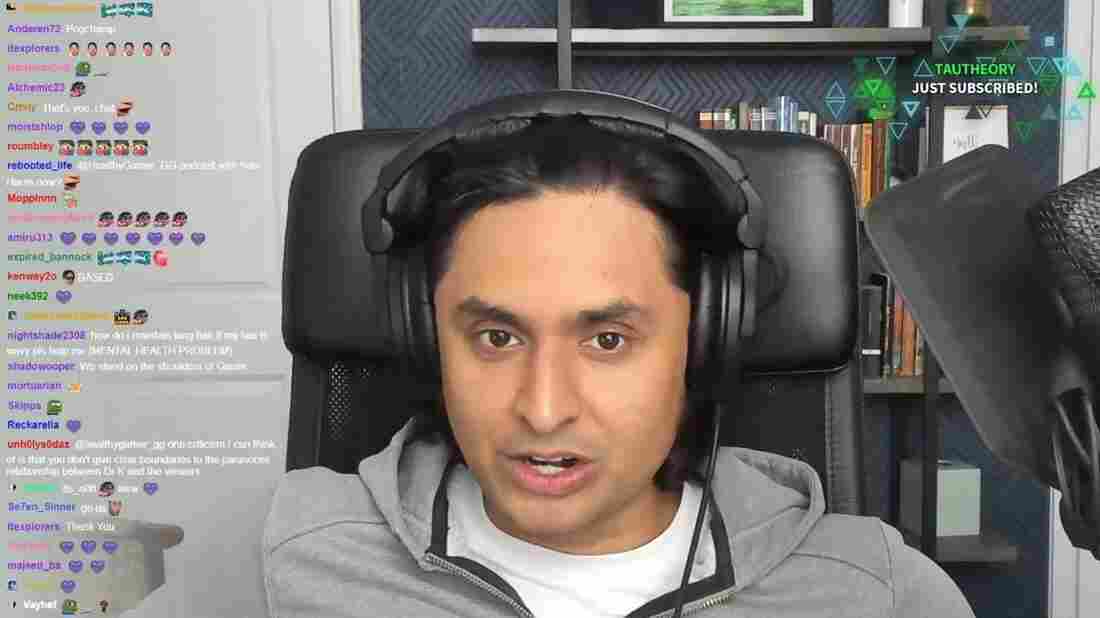 Dr. K, or Dr. Alok Kanojia, on the livestreaming platform Twitch, talking to his audience about mental health, as commenters react in real time. HealthyGamer_GG/ Screenshot by NPR hide caption 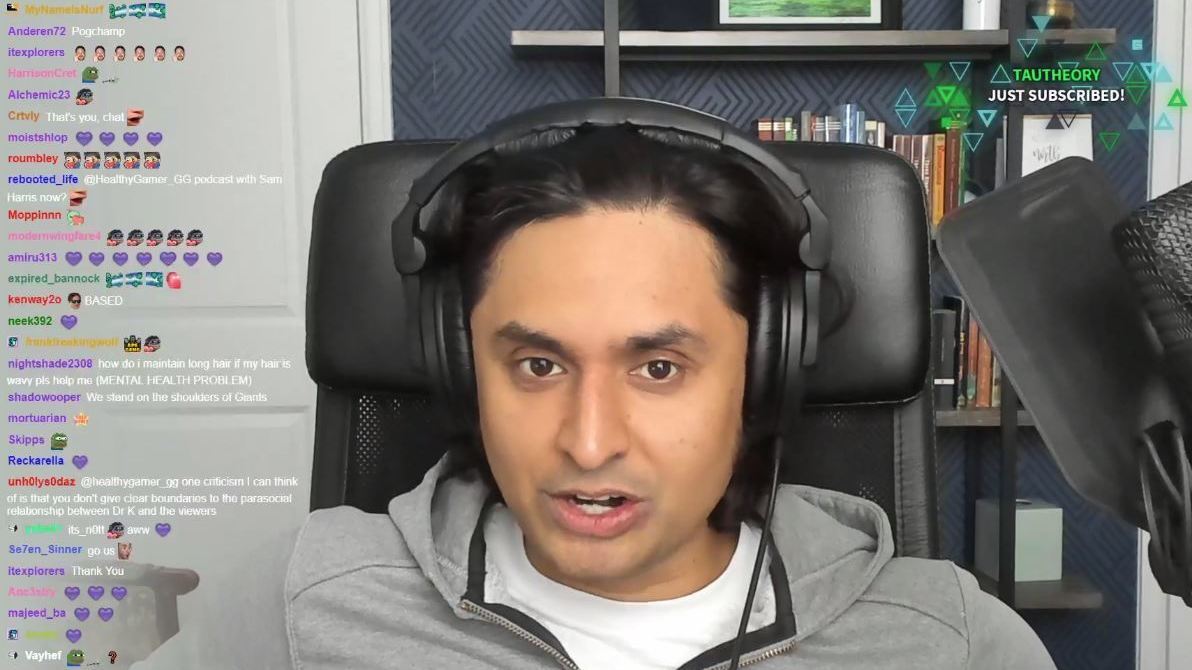 Dr. K, or Dr. Alok Kanojia, on the livestreaming platform Twitch, talking to his audience about mental health, as commenters react in real time.

On one side of the screen is Dr. Alok Kanojia. He's in his home office in a plain white t-shirt, fiddling with a pen, listening through his big headphones. He's talking to someone who goes by Mini, who's got on similarly big headphones (hers have cat ears on them). Mini's talking to Kanojia — Dr. K, as he's known to his fans — about how she's suffered depression, low self-esteem, and panic attacks all her life. The thousands of people watching this on the live streaming platform Twitch offer a steady flow of heart emojis and condolences in the chat box. Mini reveals that she's talked with six therapists, but none have given her satisfying answers. "What do you want to hear?" asks Dr. K. She pauses and fidgets and then answers, "what's wrong with me?" The heart emojis come even faster now.

This type of exchange is common on HealthyGamer_GG Twitch channel, where Kanojia will talk to people about their mental health issues, lead group discussions and guide viewers through various meditation techniques. The channel's rising popularity coincides with the growth of Twitch as a platform, the pandemic forcing us all inside and growth in mental health issues.

"Because psychiatry isn't enough," said Kanojia in a recent interview over Zoom. He suggests we need a more holistic approach, like we take towards physical health. "We need to stop thinking about just medicine. If we said you had a physical problem, imagine we had no gyms, no nutritionists — it just doesn't make sense."

Kanojia co-founded the company Healthy Gamer with his wife, Kruti Kanojia, years before he started streaming. He'd gone through his undergraduate years spending too much time playing video games like StarCraft, and Diablo 2, as a way of coping with his feelings.

As he was going through training to become a psychiatrist, he asked his teachers and mentors about video game addiction. After coming up short on answers, he turned to his gaming peers and asked questions about their mental health and reliance on video games. He found common threads between them — challenges around social anxiety, confidence, lacking purpose or meaning.

So he started holding informal group discussions both online and in person about gaming and mental health, teaching participants about meditation and allowing space for people to open up. By fall of 2019 the Kanojias thought that other people could benefit from these conversations, so they started the Twitch channel.

The HealthyGamer_GG Twitch channel is part of a long lineage of people broadcasting advice in pop culture. There was the psychologist Joyce Brothers on TV starting in the 1950s. Sex therapist Dr. Ruth became a household name in the 1980s. Dr. Phil's TV show is still going strong today. But just as they became famous personalities, Kanojia is wary about being too much of a celebrity. His fans make Dr. K memes and make ironic jokes about how Dr. K is the only one who can save them. But his hope is that those people will tune in long enough to actually listen.

How To Help Someone At Risk Of Suicide

"When they actually learn the stuff that we teach, what they realize is that they don't need me," said Kanojia.

Addie Nicole Amick sings in the band Halocene, which has itself been streaming on Twitch for over three years. She struggled with mental health issues including depression and bipolar disorder. Watching the HealthyGamer_GG stream demystified therapy for her.

"I think therapy is this scary unknown world that everybody's a little afraid of," she said.

The HealthyGamer_GG stream convinced Amick to find a therapist, but she couldn't find one who clicked with her. So she gladly agreed when Twitch asked her as a partnered streamer if she wanted to participate in a pilot program they set up with Healthy Gamer to provide mental health peer-counseling for streamers.

It takes a toll having to be "on'' all the time in front of an audience, even when you might not feel 100 percent. "There's over a thousand people watching me," says Amick. "I'm sure there are some people that are like, 'what's going on with this girl? I don't want to watch this' and then tune out. And then you see the numbers drop and then that gets inside your head."

Kanojia is careful to say that what he's doing on Twitch isn't therapy — he makes sure to say so at the top of every stream, there's a statement at the beginning when streams get reposted on to YouTube and every guest signs a consent form. But critics say it can look and sound a lot like therapy, which raises some ethical quandaries. The American Psychiatric Association Principles of Medical Ethics says that when psychiatrists are asked to give an opinion about people in a public situation, they can give general advice, "however, it is unethical for a psychiatrist to offer a professional opinion unless he or she has conducted an examination and has been granted proper authorization for such a statement." The question here is what's general advice and what's a professional opinion.

"You can say 'I'm not doing therapy,' but everything that you witness in the show is clearly therapy," says Rachel Kowert. She's a research psychologist and the research director for Take This, a mental health non profit that also serves the gaming population, and she is concerned about the safety of the people on stream. Kowert also streams about mental health topics on the Twitch channel Psychgeist — but it's less personal, more focused on topics than people. She says there's nothing inherently wrong with conversations being public, but there is a clear line between a mental health advocate and mental health professionals.

"The line is that mental health advocates do not generally provide direct recommendations or opinions about individual cases, whereas mental health professionals do."

Kowert points to a specific conversation Kanojia had with the popular streamer and eSports player Byron Daniel Bernstein, better known as Reckful, in late 2019. Bernstein begins the conversation talking about being diagnosed with type-2 bipolar disorder, and as he continues talking about his limited time feeling happy, Kanojia interjects with "you may have clinical depression, but I think what you're describing is not clinical depression. I think your problem is that your life is empty. That's different."

Bernstein: So you're saying you think I was diagnosed incorrectly when they said I have bipolar type-2?

Kanojia: You may have depression on top of that, but what I want you to understand is that, like, there are different flavors of depression.

The exchange between Dr. K and Reckful got a lot of attention after Bernstein, sadly, took his own life last summer. It affected Kanojia, who looked up to Bernstein as a gamer for years. Shortly after Bernstein's death, Kanojia took to his stream and talked about depression and suicide among gamers, and he tearfully asked his audience for help — by helping each other.

"You be vulnerable, you share, don't worry alone," he said. "Remember that your struggles are a multiplayer game, too. If you want to help someone, start by asking for help."

If you or someone you know is having suicidal thoughts, reach out for help. The National Suicide Prevention Lifeline is open 24 hours a day at 800-273-8255.