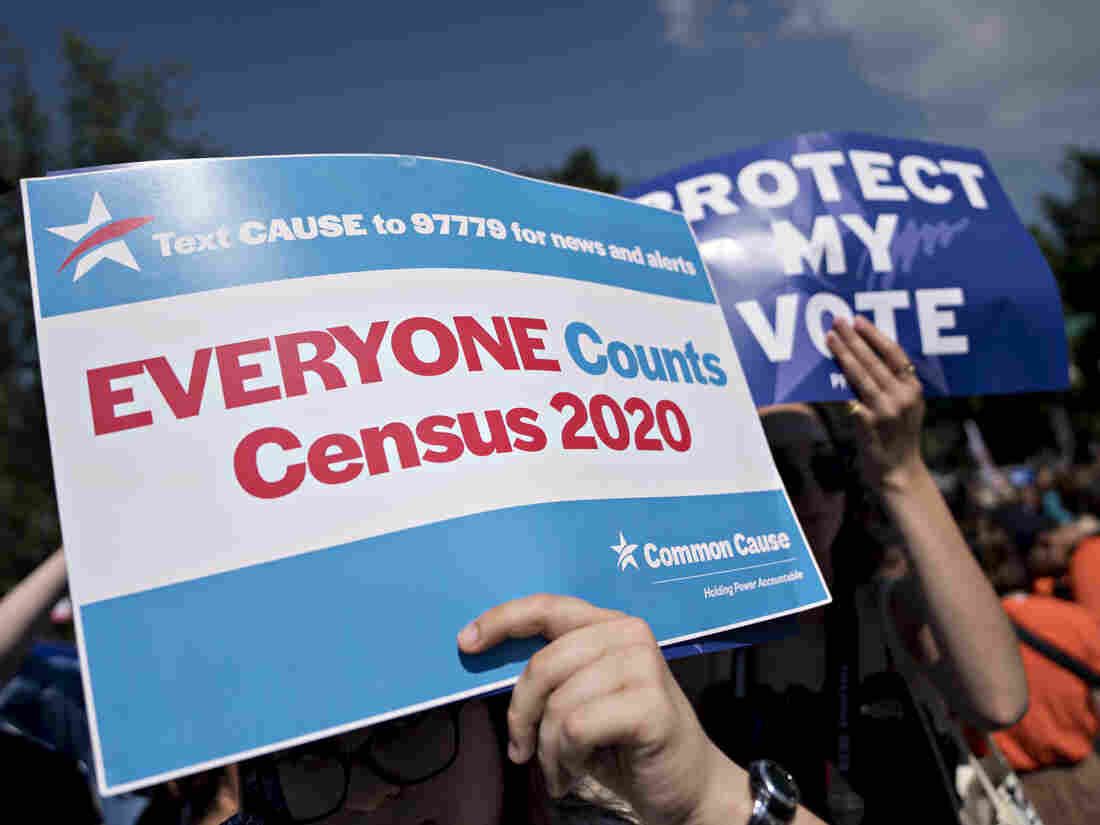 A demonstrator holds a sign about the U.S. census outside the Supreme Court in Washington, D.C., in 2019. The Census Bureau has stopped all work on President Trump's directive to produce a count of unauthorized immigrants that could be subtracted from a key set of census numbers, NPR has learned. Andrew Harrer/Bloomberg via Getty Images hide caption 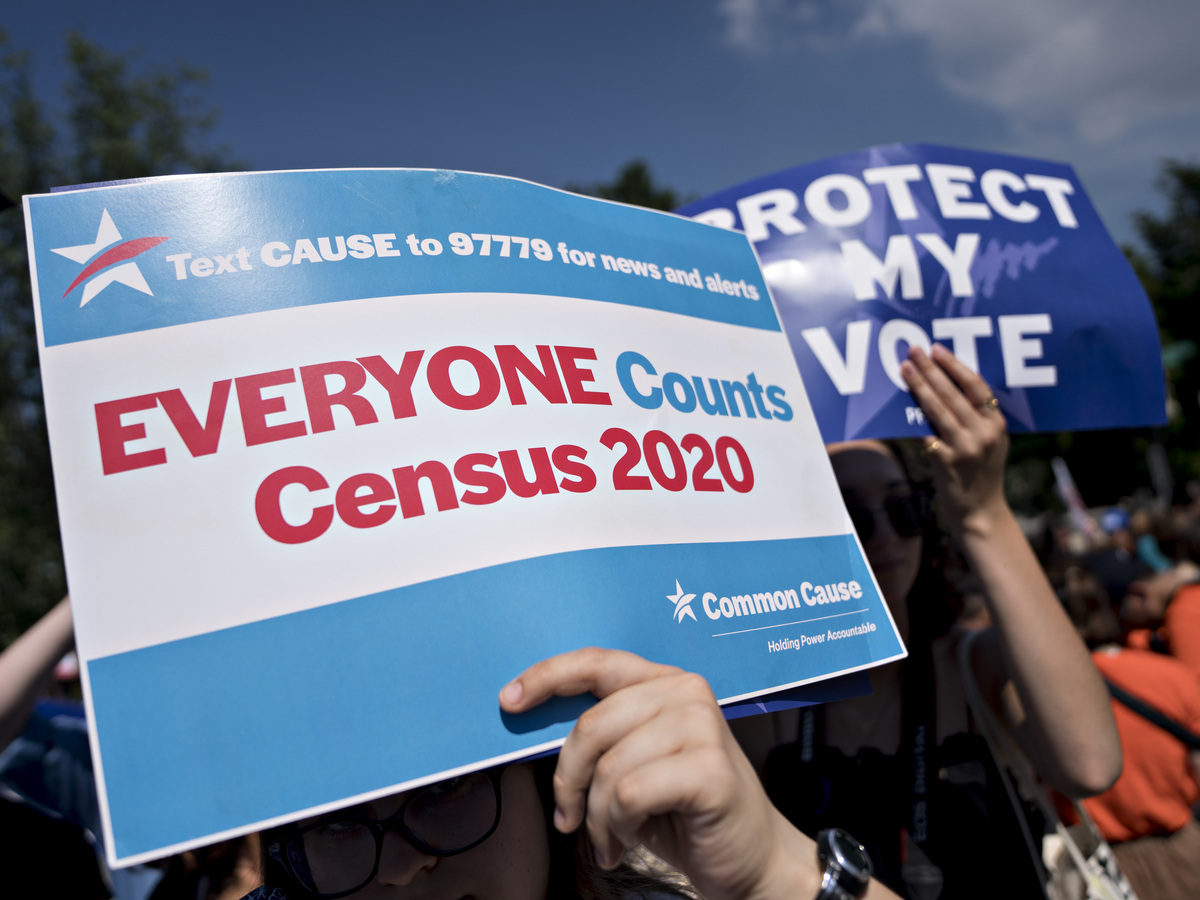 A demonstrator holds a sign about the U.S. census outside the Supreme Court in Washington, D.C., in 2019. The Census Bureau has stopped all work on President Trump's directive to produce a count of unauthorized immigrants that could be subtracted from a key set of census numbers, NPR has learned.

The U.S. Census Bureau has halted all work on President Trump's directive to produce a state-by-state count of unauthorized immigrants that would have been used to alter a key set of census numbers, NPR has learned.

Senior career officials at the bureau instructed the internal team assigned to carry out Trump's presidential memo to stand down and cease their work immediately on Tuesday night, according to a bureau employee who spoke to NPR on the condition of anonymity out of fear of retaliation in the workplace for speaking out.

The move by civil servants effectively ends the bureau's participation in Trump's bid to make an unprecedented change to who is counted in the 2020 census numbers that will be used to reallocate each state's share of congressional seats and Electoral College votes for the next decade. According to the 14th Amendment, those counts must include the "whole number of persons in each state."

In a court filing Friday, Justice Department attorneys confirmed that none of the data Trump would need to alter the congressional apportionment counts would be released before Trump's term ends. It is "impossible" now for the administration to carry out Trump's plan, DOJ attorney Brad Rosenberg told U.S. District Judge Lucy Koh during a virtual court conference for a National Urban League-led lawsuit over the census schedule.

Trump's Census Director Is Trying To Rush Out Data On Noncitizens, Watchdog Says

The president's memo, which was issued in July, was found to be unlawful, unconstitutional or both by three lower courts last year before the Supreme Court ruled in December that it was too early for any court to weigh in because the case is "riddled with contingencies and speculation."

Trump's effort has already been hampered by schedule delays stemming from irregularities in the census records that, in addition to the coronavirus pandemic, have resulted in the bureau extending the time for running quality checks and pushing back the release for the first set of census results.

This week, a Justice Department attorney informed Koh, the federal judge hearing the lawsuit about the census schedule, that the state population counts needed for reapportioning House seats and electoral votes are not expected to be ready until March 6, more than a month into the administration of President-elect Joe Biden, who has condemned Trump's attempt to exclude unauthorized immigrants.

The American Civil Liberties Union, one of the groups that led a lawsuit against Trump's memo, is calling for Biden to "formally rescind" Trump's policy after becoming president.

"Doing so would send the message that under our Constitution, everyone in this country counts," Dale Ho, director of the ACLU's Voting Rights Project, said in a statement.

The Census Bureau's public information office has not responded to NPR's request for comment.

On Tuesday, another Trump administration push for data about unauthorized immigrants, as well as other noncitizens in the U.S., suffered a blow after the bureau's internal watchdog issued a memo revealing that the agency's Trump-appointed director had pressured employees to produce a report by Friday.

According to a memo by Commerce Department Inspector General Peggy Gustafson, multiple whistleblowers at the bureau reported that they are concerned Census Bureau Director Steven Dillingham was trying to rush out a data report on noncitizens that would be "statistically indefensible" and could be "misinterpreted, misused, or otherwise tarnish the Bureau's reputation."

It remains unclear what exactly the Trump administration would do with the data report on noncitizens. Gustafson asked Dillingham to provide a written explanation.

In a reply on Wednesday, Dillingham said he told career employees to "stand down" on working on the technical report "immediately" after learning of staffers' concerns through the inspector general's memo.

Dillingham said that the report was a "mechanism" to assess the bureau's progress in fulfilling an executive order Trump issued in 2019 after the Supreme Court blocked the administration's effort to add a citizenship question to census forms. That order calls for the bureau to use government records on citizenship from other federal agencies and some states to produce "data on the number of citizens, non-citizens, and illegal aliens" in the U.S.

In response to NPR's reporting on Dillingham's directive, Sen. Jeanne Shaheen of New Hampshire, the top Democrat on the Senate appropriations subcommittee that funds the bureau, issued a tweet on Tuesday criticizing Trump for making "a mission out of manipulating the census." The senator said she will work with the Biden administration to "repair the damage Trump caused."

Leaders of civil rights groups — including The Leadership Conference on Civil and Human Rights, the National Association of Latino Elected and Appointed Officials Educational Fund and Asian Americans Advancing Justice - AAJC — are calling for Dillingham's immediate resignation. His appointment at the bureau is set to continue past the end of the Trump administration and until the end of this year.

"After considering Director Dillingham's efforts to undermine the agency's core standards of data quality in order to carry out a political agenda," the organizations' leaders — Wade Henderson, Arturo Vargas and John Yang — said in a joint statement, "we believe that he can no longer carry out his duties as the leader of our nation's most prestigious statistical agency."