Accessibility links
'Drug Use For Grown-Ups' Serves As An Argument For Personal Choice Dr. Carl Hart's positions on drug use and availability may seem quite extreme to some — but are thoughtful and data-driven. He asserts that racism is a major factor in the negative image drugs carry. 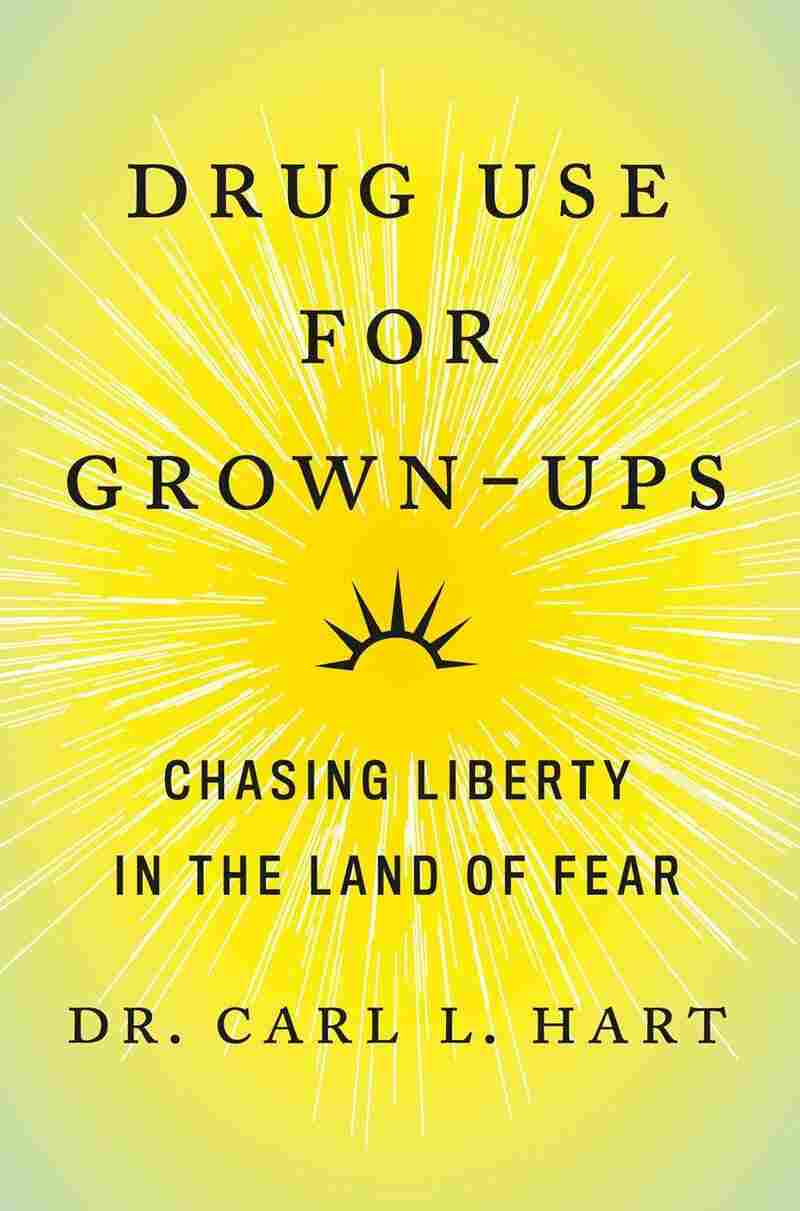 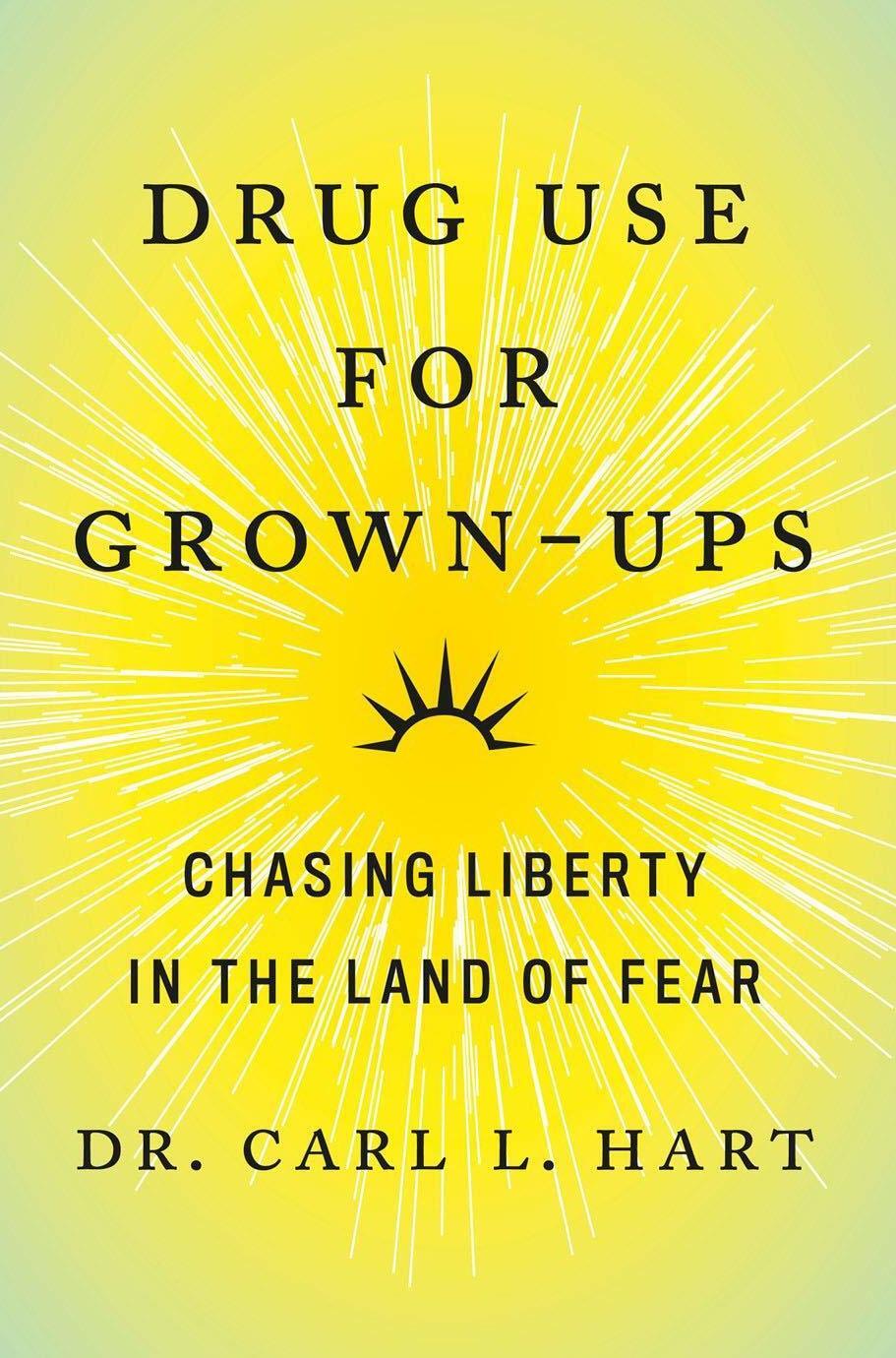 Drug Use for Grown-Ups: Chasing Liberty in the Land of Fear, by Dr. Carl L. Hart

If you grew up scared of what illicit drugs could do to you — hearing about all the horrors that could befall you from everyone from Nancy Reagan to your parents — the threat may have felt very real: If you actually took a puff off that joint that the kid who slept through math class offered you, it could lead to failed relationships, chronic unemployment, self-destruction.

The shame would outlive you.

But drugs are a more complicated matter than they've been made out to be, according to Dr. Carl L. Hart. In his new book Drug Use for Grown-Ups, the Columbia University professor of psychology and psychiatry zealously argues that drug use should be a matter of personal choice — and that, in more cases than not, personal choice can lead to positive outcomes. His positions may seem quite extreme to some but they also, by and large, make a lot of sense — and are backed up by ample research.

A major reason drugs have such a negative public image, Hart asserts, is racism. He notes that after the Civil War, some Chinese railroad construction workers smoked opium and, sometimes, established "opium dens" to do so. Over time, more and more white Americans visited these dens to smoke opium too. That in turn led to broader, bigoted social fear among whites, like, for example, the sentiments captured in H.H. Kane's 1882 report:

"The practice spread widely...Many women and young girls, as also young men of respectable family, were being induced to visit the dens, where they were ruined morally and otherwise."

Then there was the post-Civil War use of cocaine among some Black day laborers, something Hart writes was at first encouraged by white employers because of the productivity it could promote. Soon enough, however, articles appeared widely that tried to make a connection between African American cocaine use and criminality. One particularly egregious article in The New York Times in 1914, cited by Hart, even reported that some police in the South "who appreciate the vitality of the cocaine-crazed" were switching to higher-caliber weaponry capable of "greater shocking power for the express purpose of combating 'the fiend'."

But horrifying history aside, one of the book's most eye-opening aspects is its challenge of the long-running association between drugs and addiction. First the basics: Addiction, according to the Diagnostic and Statistical Manual of Mental Disorders, 5th Edition (DSM - 5), must be a source of distress for a drug user. It must also interfere with a person's job, parenting or personal relationships. Other indications of addiction may be high tolerance, withdrawal symptoms, or persistence in repeated failed efforts to quit. Hart writes that 70 percent or more of drug users do not meet this criteria for addiction. In fact, he notes "such issues affect only 10 percent to 30 percent of those who use even the most stigmatized drugs, such as heroin or methamphetamine."

Hart argues, citing much evidence, that it's a pre-existing kind of personal vulnerability — psychological and/or circumstantial — that precedes the drugs themselves that can lead to addiction. He asserts that:

"...the evidence tells us that we must look beyond the drug itself when trying to help people with drug addiction. In fact, regarding the relatively small percentage of individuals who do become addicted, co-occurring psychiatric disorders — such as excessive anxiety, depression, and schizophrenia — and socioeconomic factors — such as resource-deprived communities and un- and underemployment — account for a substantial proportion of these addictions."

And when addiction does occur, there should be safe spaces for people to get help, he says. Hart's model for treatment is a Swiss clinic he first learned about while he was in Geneva for a talk in 2014. The clinic gave those addicted to heroin daily doses, in a similar way to how people with hypertension or diabetes would receive beta-blockers or insulin. Hart recalls:

"Patients were required to show up at scheduled times twice a day — once in the morning and once in the evening — seven days a week. Like a Swiss watch, so-called junkies were reliably on time. They were almost never late. And as a result of being in the program, their health improved; they were happy and living responsible lives."

Hart notes that "people stayed in treatment. The number of new blood-borne infections, such as HIV and hepatitis C, dramatically decreased. Petty crimes committed by heroin users also went down. And no heroin user has ever died while receiving heroin in the clinic."

But he's careful to emphasize that this is a treatment, not a cure. He writes:

"I don't want to leave you with the impression that heroin maintenance is a panacea. It's not. It's not even a cure for heroin addiction; it's simply a treatment. There are no cures in psychiatric medicine. We don't have a cure for depression, nor do we have a cure for schizophrenia or anxiety. We merely have medications and therapies that treat symptoms, and this allows patients to function better, despite their illnesses."

For those concerned with the efficacy of such programs, the Swiss approach to treating heroin addiction was also taken up by other countries like Belgium, the Netherlands, Denmark, and Germany after programs based on abstinence or methadone treatment failed. And Hart answers the inevitable question many will pose about the alleged connection between drugs and poverty and crime. He thinks back to his youth when even he didn't see things the way he does now.

"What about the notion that drugs led to poverty and crime in my neighborhood?" he asks. "Well, that is simply an ugly fantasy, an incredibly effective one to be sure. It's effective not only because it is still believed by large segments of the American public but also because it seemingly provides a simple solution to complicated problems faced by poor and desperate people. Many other complex factors are responsible for the turmoil seen in the places of my youth and other communities. But it took me a long time to see that clearly myself."

Hart also offers as an alternative to the punitive approach to drug use America has historically taken. Broadly, he advocates for drug legalization because he sees it as everyone's right to take whatever drug they want. But he also so importantly emphasizes that anti-drug laws have disproportionately ruined the lives of people of color; for more detail on that, this Human Rights Watch report offers data.

Drug Use for Grown-Ups makes the case for people having the right to use drugs if they want to. As Hart sees it, it would be best for drugs to be legal, in tandem with government regulation, purity testing, and social support for those who need it. What we have now, instead, is racist mass incarceration and social shame prevailing (and drugs hardly scarce anyway).

This, understandably, he does not see as sustainable, nor morally justifiable, nor effective in any way. He persuasively argues for us, as Americans, to chart a more humane course for how we see drugs in our society — a course rooted in personal freedom without social stigma.