Accessibility links
Off-Duty Police Officers At Capitol Riot Investigated, Charged More than two dozen off-duty officers attended the pro-Trump rally. Many celebrated on social media at the time. But now they could face federal charges and find themselves out of a job. 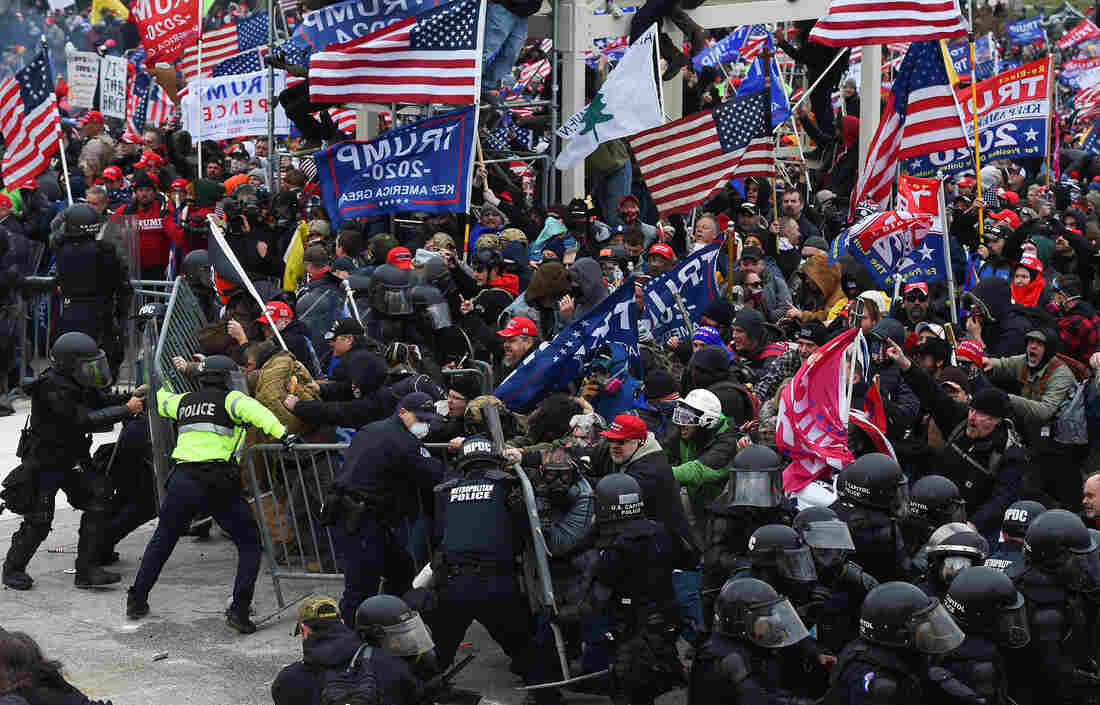 Pro-Trump supporters breeched security and stormed the U.S. Capitol on Jan. 6, 2021. Federal authorities as well as several local departments are looking into whether any off-duty officers were involved in the attack. Roberto Schmidt/AFP via Getty Images hide caption 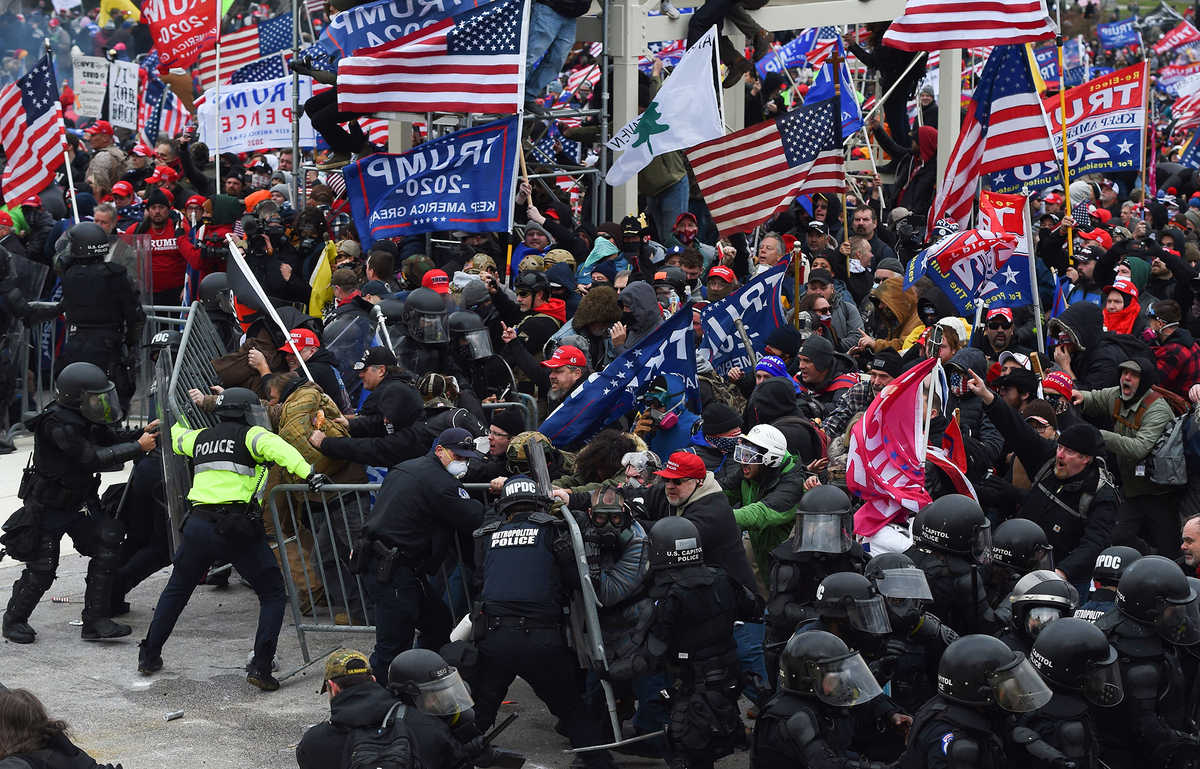 Pro-Trump supporters breeched security and stormed the U.S. Capitol on Jan. 6, 2021. Federal authorities as well as several local departments are looking into whether any off-duty officers were involved in the attack.

Nearly 30 sworn police officers from a dozen departments attended the pro-Trump rally at the U.S. Capitol last week, and several stormed the building with rioters and are facing federal criminal charges as well as possible expulsion or other discipline.

The officers are from departments large and small. There was veteran officer in Houston, the nation's eighth-largest department; a sergeant in the small town of Rocky Mount, Va., and a group of Philadelphia transit officers.

Five people were killed in the riots, including Capitol Police Officer Brian Sicknick and Trump supporter Ashli Babbitt, who was shot by an officer when she attempted to breach a barricaded door inside the Capitol.

Houston police officer Tam Pham, an 18-year veteran, resigned Thursday in the wake of federal charges against him, Houston Chief Art Acevedo said in a tweet. Photos emerged showing Pham inside the Capitol during the riots holding a Trump flag alongside other pro-Trump extremists. Federal prosecutors are investigating.

The @houstonpolice officer in question tendered his resignation this morning. The Department will release his name upon the conclusion of our joint ongoing criminal investigation with @FBI and @TheJusticeDept. https://t.co/5HlwgGuIJf

"There is no excuse for criminal activity, especially from a police officer," Chief Acevedo said. "I can't tell you the anger I feel at the thought of a police officer and other police officers thinking they get to go storm the Capitol."

In Virginia, photos emerged showing Rocky Mount Police Sgt. T.J. Robertson and Officer Jacob Fracker inside the Capitol with other rioters. Robertson told The Roanoke Times that he and officer Fracker did nothing illegal. "Where I was at there was no violence. There was no fighting with police officers."

Each officer has been charged with one federal count of "knowingly entering or remaining in any restricted building or grounds without lawful authority and one count of violent entry and disorderly conduct on Capitol grounds," according to the U.S. Attorney's Office for the District of Columbia. Both were arrested and released without bond.

In a since-deleted Facebook post, Fracker wrote after the riots: "Lol to anyone who's possibly concerned about the picture of me going around... Sorry I hate freedom? ...Not like I did anything illegal...y'all do what you feel you need to." And in screenshot of a Facebook post circulating, Robertson wrote: "CNN and the Left are just mad because we actually attacked the government who is the problem and not some random small business ... The right IN ONE DAY took the f——— U.S. Capitol. Keep poking us."

Asked for comment, Town Manager James Ervin said in an email to NPR that the town supports their employees' "rights to engage in speech and assembly but expects the actions taken while doing so to be lawful." Ervin declined to comment further, citing the criminal probe. The officers are currently on paid leave, Ervin says, as per town policy.

The federal charges and ongoing investigations are likely to further erode public trust in police and again raise concerns about oversight and accountability, especially in the wake of 2020's nationwide protests against police brutality and for racial justice following the killings of Black men and women by police officers.

Chuck Wexler, executive director of the Police Executive Research Forum, told NPR the charges against off-duty officers are all the more reprehensible because many officers on duty at the Capitol "acted heroically that day.

"Police officers should know more than others that engaging in mob behavior is abhorrent. At a time when people are questioning police legitimacy, this isn't helpful. It's worse than that, it's despicable. It's despicable because you have 50 officers hurt and one who died. This is just unconscionable," Wexler said, adding, "those officers who engaged in mob behavior should be held accountable and should not be police officers. Period."

"One of the top philosophical statements we make to recruits is you are guardians of the democracy. You're not just there to investigate crimes, but you're there to actually uphold the democracy, because our country depends on the rule of law," Rahr told NPR. "And what happened at the Capitol was completely against everything that the concept of the rule of law stands for."

In Texas, Bexar County Sheriff's Lt. Roxanne Mathai, an eight-year veteran of the force, is on unpaid administrative leave after posting photos of herself in the pro-Trump mob on a Capitol balcony after rioters stormed past police lines. She called it on Facebook "one of the best days" of her life. She also faces possible federal charges. A post on her Facebook page also says "and we are going in... in the crowd at the stairs...not inside the capitol like the others. Not catching a case lol."

Bexar County Sheriff Javier Salazar told KSAT TV: "My intent is that she never set foot in this building again."

Mathai's lawyer, Hector Cortes, told the news station that "her role in the chaos is really just attending a political rally for a president who she supports." A department spokesman, Deputy Johnny Garcia, told NPR that Mathai already was on administrative leave from a previous incident involving "an inappropriate relationship" with an inmate in the jail. Garcia declined to elaborate on either case since both are under investigation.

The New York Police Department is looking into allegations one of their officers was among the rioters. John Miller, the NYPD's deputy commissioner of intelligence and counterterrorism, said on Thursday, "We're taking outside tips, we're getting information from the FBI," adding that internal affairs "is the recipient of any allegations that anybody who is an employee of the NYPD conducted any illegal activity."

"They are being investigated to see if they were involved in riotous behavior or for violations of our social media policies," said Chief Thomas Nestel of the Southeastern Pennsylvania Transportation Authority.

In Seattle, two police officers who attended the rally are also under investigation. Interim Police Chief Adrian Diaz in a statement said that while he fully supports all lawful expressions of free speech, "if any SPD officers were directly involved in the insurrection at the U.S. Capitol, I will immediately terminate them. While OPA investigates, these officers have been placed on administrative leave."

In Chicago, there are calls for the resignation of John Catanzara, who heads the powerful police union. Catanzara at first strongly defended the rioters, called them nonviolent and echoed the president's false claims about election fraud in an interview with NPR station WBEZ. He later apologized.

In Oklahoma, social media posts raise questions about Canadian County Sheriff Chris West, because of statements attributed to him on a since-deleted Facebook account. West said at a press conference that he only attended the rally and did not push past police or enter the Capitol. Last Friday, West said the "egregious crimes on our beacon and bastion of last hope for our nation, breaking into that and terrorizing it, I rebuke all of that, every bit of it."

But KFOR TV in Oklahoma reports that a man named Bryan Harter claims he was in the Capitol with the sheriff during the insurrection, posting on Facebook, "I was in DC for the protest at the capitol with sheriff west. I took a weeks vacation spent my own money and drove 40 hours round trip! After 23 years of military service, I felt it my duty to stand for us. For fair elections. Honestly they are lucky we just occupied. We literally pushed past the police said we are here and left. Burned nothing looted nothing. Now we are called terrorists. People better wake Up, before its too late."

And in the deleted Facebook account, KFOR reported, Sheriff West appears to embrace the baseless claims of election fraud pushed by President Trump. "If they're okay rigging an election and foreign help to steal the white house and control of WeThePeople, then I'm okay with using whatever means necessary to preserve America and save FREEDOM & LIBERTY."

Police training executive Rahr says she sent a memo to all her recruits and staff reminding them of the important role law enforcement can play in reassuring the public "that our democracy can survive the politically divisive conflicts that are erupting." Rahr adds the majority of law enforcement officers in this country "are just as ashamed and disgusted as I am because the storming of the Capitol is, there's there's no defense for that. There just isn't."