Accessibility links
Macho Politics Defined Trump's Presidency, Culminating With Capitol Riot Amid all the chaos of the Trump presidency, he has been consistent in his fixation on emphasizing and protecting his own manhood. Rioters at the Capitol reflected that attitude on Jan. 6. 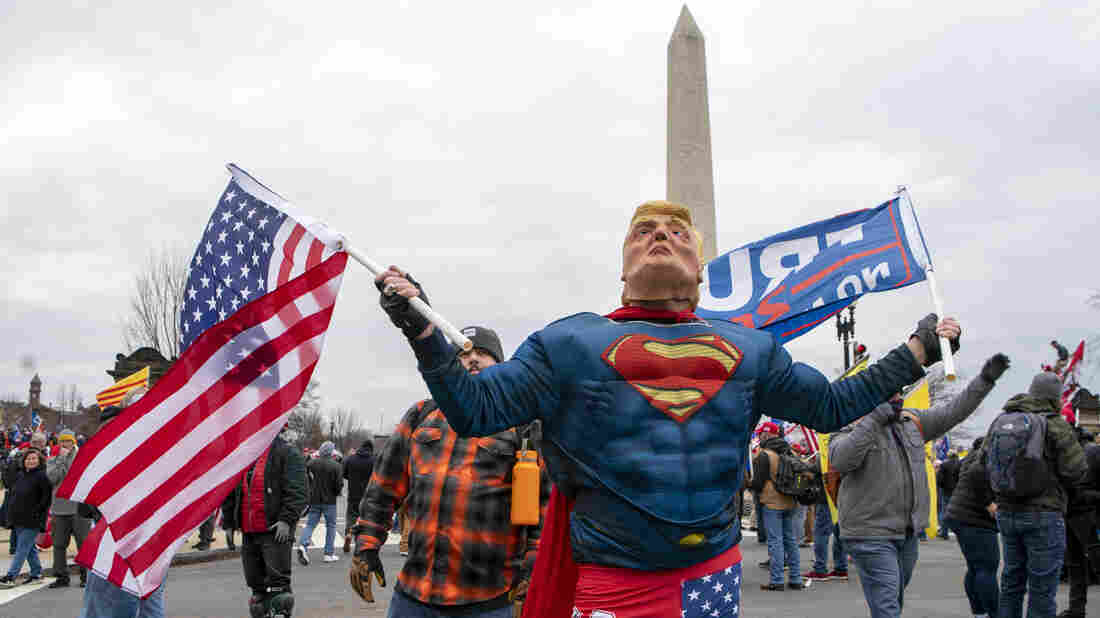 A Trump supporter dressed as the president in a Superman outfit attends the Jan. 6 rally against the election results before rioters stormed the U.S. Capitol. Jose Luis Magana/AP hide caption 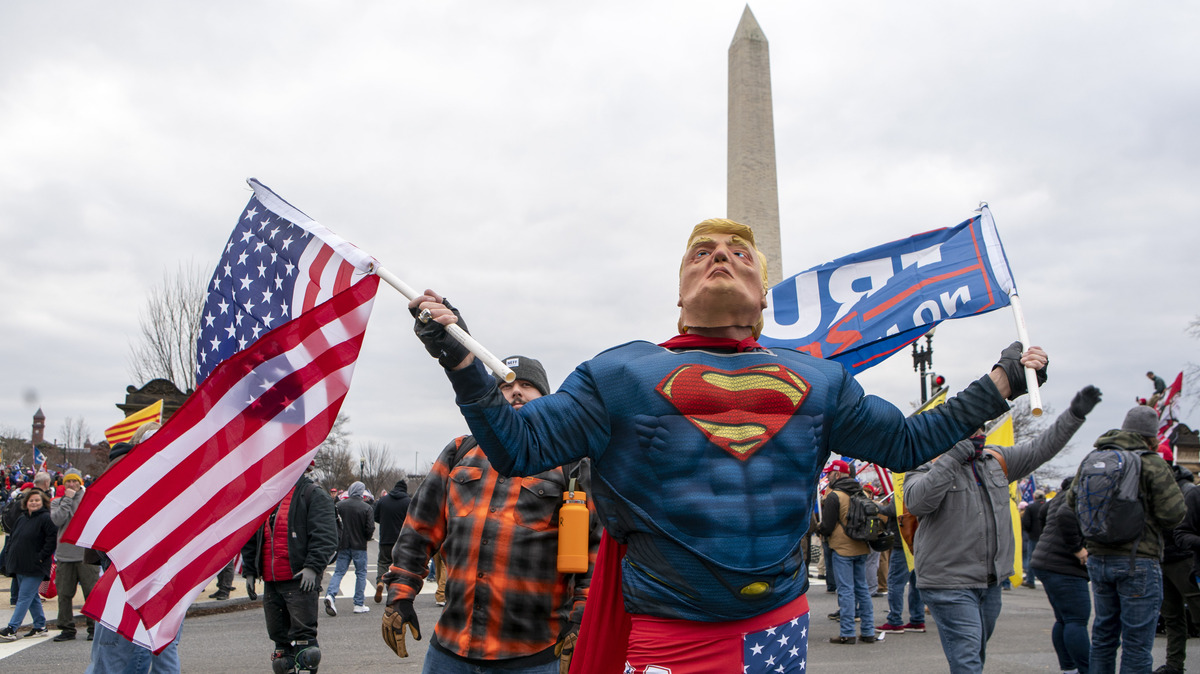 A Trump supporter dressed as the president in a Superman outfit attends the Jan. 6 rally against the election results before rioters stormed the U.S. Capitol.

In President Trump's Jan. 6 speech ahead of the riot on Capitol Hill, there was a telling moment that was easy to miss amid his calls to "fight like hell." It was when Trump went on a tangent about the Republican governor of Georgia, one of the states Trump is angry he did not win on Election Day.​

For however random and rambling that may have seemed, it nevertheless fit into the speech perfectly: the president belittling an opponent as weak while portraying himself and his supporters as strong. Weakness, it turned out, was a major theme in that speech, with the president wielding it in particular against his fellow Republicans.

It wasn't just this speech. Amid all the chaos of the Trump presidency, he has been unfailingly consistent in his fixation on being a tough guy — one with a very particular, combative form of masculinity.

It has shown up everywhere in his political career from petty insults, referring to primary opponents as "lil' Marco" and "low-energy Jeb," to encouraging violence against protesters at his rallies.

That macho presidency culminated with a riot on Capitol Hill that left five dead. The crowd was not only overwhelmingly white, but majority-male, according to observers.

A "not totally unpredictable" riot

"The events at the Capitol, while they were dramatic and outrageous, they were not totally unpredictable," said Jackson Katz, author and creator of the film The Man Card, about white male identity politics. ​

In his opinion, while race has been central to Trump's political strategy, gender is also inextricable.​

"What he's been signaling is not just that he's the white person who's going to stand up for white civilization, if you will, but he's a white man who's tough, who doesn't back down and who's strong, who embodies a certain kind of masculine gravitas and strength," Katz said.

President Trump won't have to recover from COVID.

COVID will have to recover from President Trump. #MAGA

In fact, the days since the riot have provided still new evidence of Trump's preoccupation with his gender. Former chief of staff John Kelly told a Des Moines audience that Trump can't admit to mistakes because "his manhood is at issue here," as The Des Moines Register's Donnelle Ellers reported.

The strong link between performative masculinity and the Trump presidency is not just anecdotal. There is a growing body of scholarly evidence of the links between gender attitudes and Trump support: for example, in a newly published study from Terri Vescio and Nathaniel Schermerhorn at Penn State University.

"Our main finding was that people who endorse 'hegemonic masculinity,' or the idea that men should be powerful, high status, tough and nothing like women, the people who endorse these ideals were more likely to support Trump," Vescio said. "And that was for men and women over and above gender, over and above political orientation, and regardless of level of education."

Again, that was for men and women, meaning that it's not surprising that women were among the rioters. In one widely shared video, Texan Jenny Cudd bragged about her part in the riots.

"We did break down [House Speaker] Nancy Pelosi's office door and somebody stole her gavel, and took a picture sitting in the chair flipping off the camera, and that was on Fox News," she said.

The idealization of a particular type of masculinity has gone hand in hand with hostility to women. Research has also found a link between "hostile sexism" and Trump support. In addition, numerous reports since the Capitol Hill riot have cited misogynist language among the rioters toward women leaders like Pelosi and Washington, D.C., Mayor Muriel Bowser.

One man, Richard Barnett of Arkansas, was photographed sitting at Pelosi's desk and later bragged about stealing a piece of her mail.

"I wrote her a nasty note, put my feet up on her desk and scratched my balls," he told the New York Times' Matthew Rosenberg. 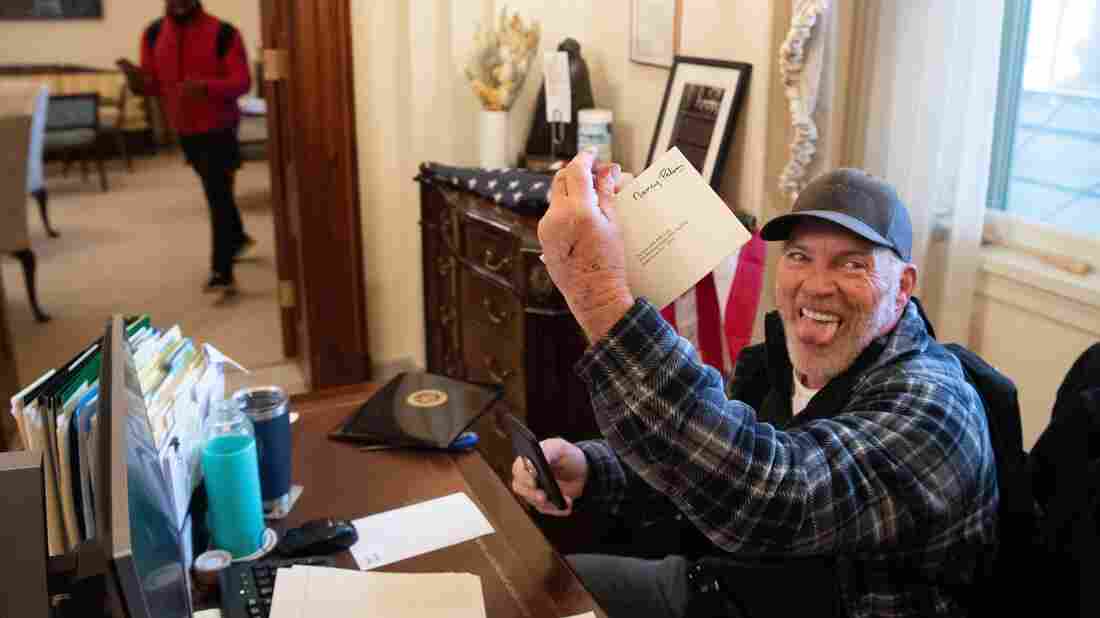 Richard Barnett holds a piece of mail as he sits inside the office of House Speaker Nancy Pelosi after rioters breached the U.S. Capitol. He bragged about leaving a note containing a sexist slur for Pelosi. Saul Loeb/AFP via Getty Images hide caption 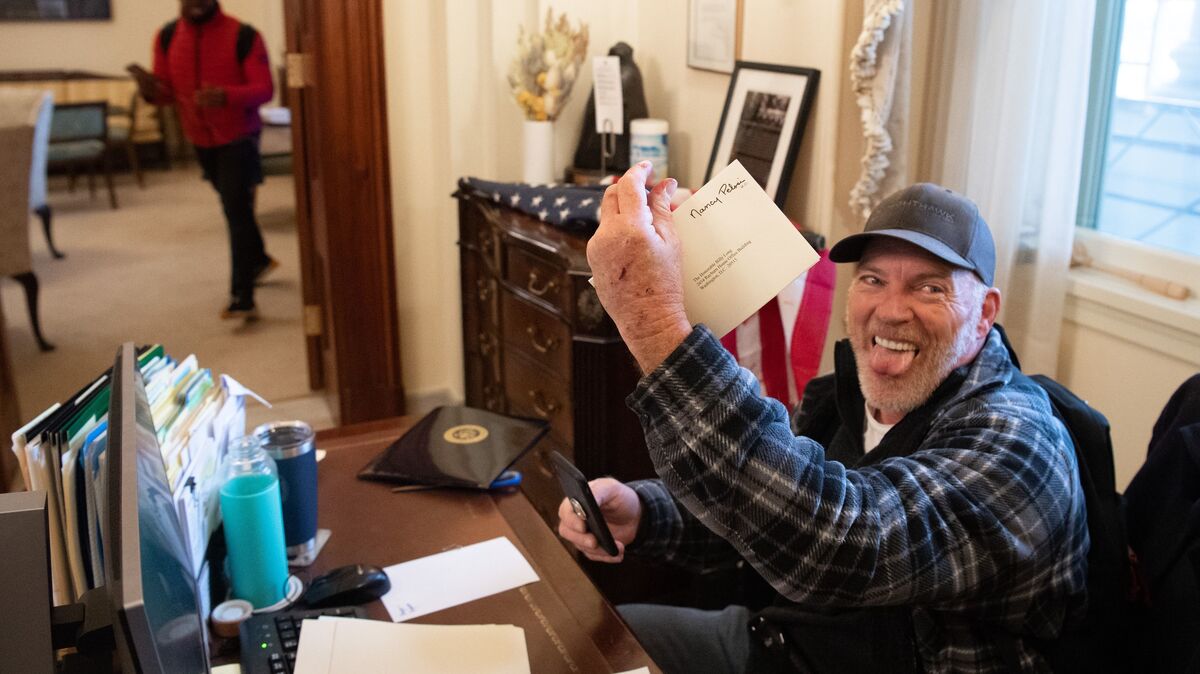 Richard Barnett holds a piece of mail as he sits inside the office of House Speaker Nancy Pelosi after rioters breached the U.S. Capitol. He bragged about leaving a note containing a sexist slur for Pelosi.

Trump's broad appeal to voters and the way that he emboldens right-wing extremists reflect broader global political trends, in the opinion of Soraya Chemaly, executive director of the Representation Project, a nonprofit that fights gender inequality.

"​I think there's a lot going on. I think that one thing is that there is a global tide of macho fascism and masculinist backlash against change," she said. "And I think that what we saw in the rise of Trump was part of that tide."

For now, Trump and his team are trying to burnish his masculine image as he leaves office. This was highlighted when Fox News' Bill Hemmer asked Trump campaign spokesman Hogan Gidley last week about Trump's feelings in the fallout from the riot.

"With the social media crackdown, does he feel emasculated?" Hemmer said.

"Look. I wouldn't say emasculated," Gidley said. "The most masculine person to ever hold the White House is the president of the United States."

It was one of the most salient aspects of the Trump presidency, captured in one unsubtle question and one unsubtle response.