Accessibility links
Migrant Caravan: Thousands Move Into Guatemala, Hoping To Reach U.S. Some of the Honduran migrants in the caravan say they are hoping to see a change in U.S. asylum policy when President-elect Joe Biden takes office. 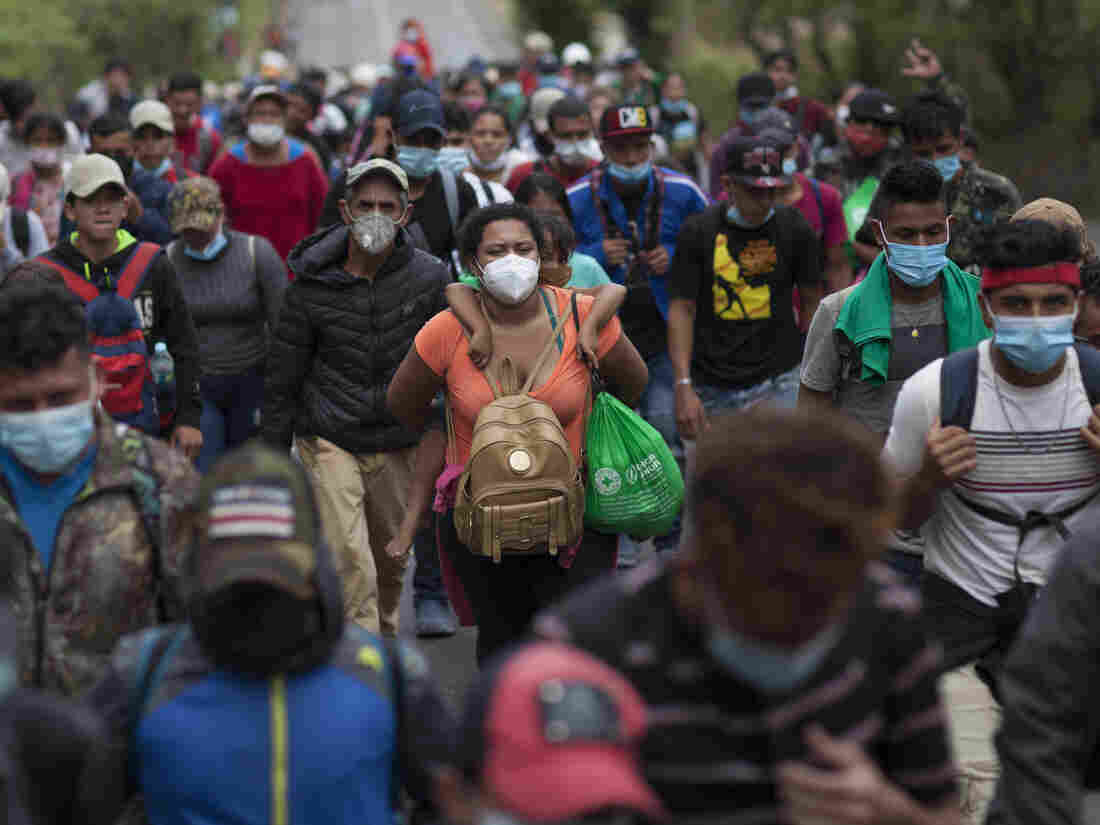 A Honduran migrant woman carries a child on her back as they travel with other migrants by foot along a highway in Chiquimula, Guatemala, on Saturday, in hopes of reaching the U.S. border. Sandra Sebastian/AP hide caption 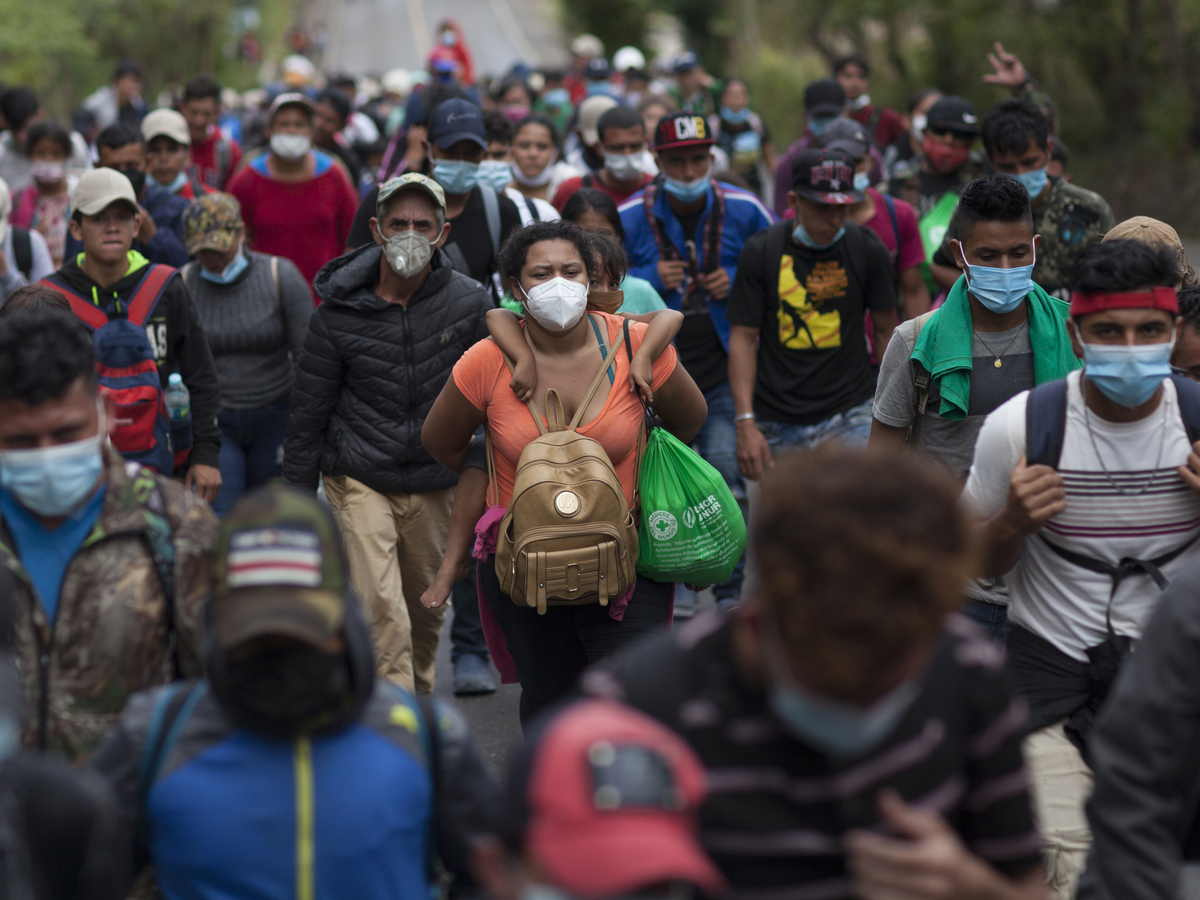 A Honduran migrant woman carries a child on her back as they travel with other migrants by foot along a highway in Chiquimula, Guatemala, on Saturday, in hopes of reaching the U.S. border.

Guatemala security forces are attempting to block thousands of Honduran migrants from heading north towards Mexico and the U.S. border.

On Sunday, police and soldiers in riot gear confronted a caravan of migrants from Honduras on a highway near Chiquimula in southeastern Guatemala. After a tense standoff, in which police fired tear gas and attempted to beat back the migrants with batons, the surging crowd broke through a phalanx of soldiers.

Guillermo Díaz, Guatemala's top immigration official, says that since Friday 7,000-8,000 Hondurans have crossed in to Guatemala in an "irregular" manner.

"We are very concerned about this situation," Díaz says in a video on his department's Facebook page. "These people who've formed this caravan or are forming into a caravan...is a very difficult situation to manage." Guatemala has set up checkpoints on main roads leading to and from the Honduran border. However, Díaz says many of the migrants have left the main roads and are now arriving in towns in the middle of the country. Officials are very worried, he adds, because another group of roughly the same size is on its way.

"We hope this situation stops," he says. "And this flow of migrants ends."

Mexican authorities praised the Guatemalan government's forceful response to the migrants. Mexico has beefed up security on its own southern border with Guatemala in anticipation of the caravan. Mexico also sent six buses south to help transport Hondurans back to their home country. The Mexican Secretary for Foreign Affairs issued a statement calling on Honduran officials to do more to stop the "irregular flow" of citizens through the region.

But migrants in the caravan say they have little choice but to march north.

"We don't want to live in Honduras anymore," Ana Murillo told the French news agency Agence France-Presse. Standing with a group of migrants beside a busy road in southern Guatemala, she says Hondurans have been badly affected by hurricanes Eta and Iota, which slammed into the country in November. Honduras also suffers from incredibly high rates of violent crime and the pandemic has crippled the economy.

"There isn't any work. There are no opportunities," she says. A light blue cloth face mask hangs from her chin, several bags and children are at her feet. "We are leaving because we don't want to suffer further." 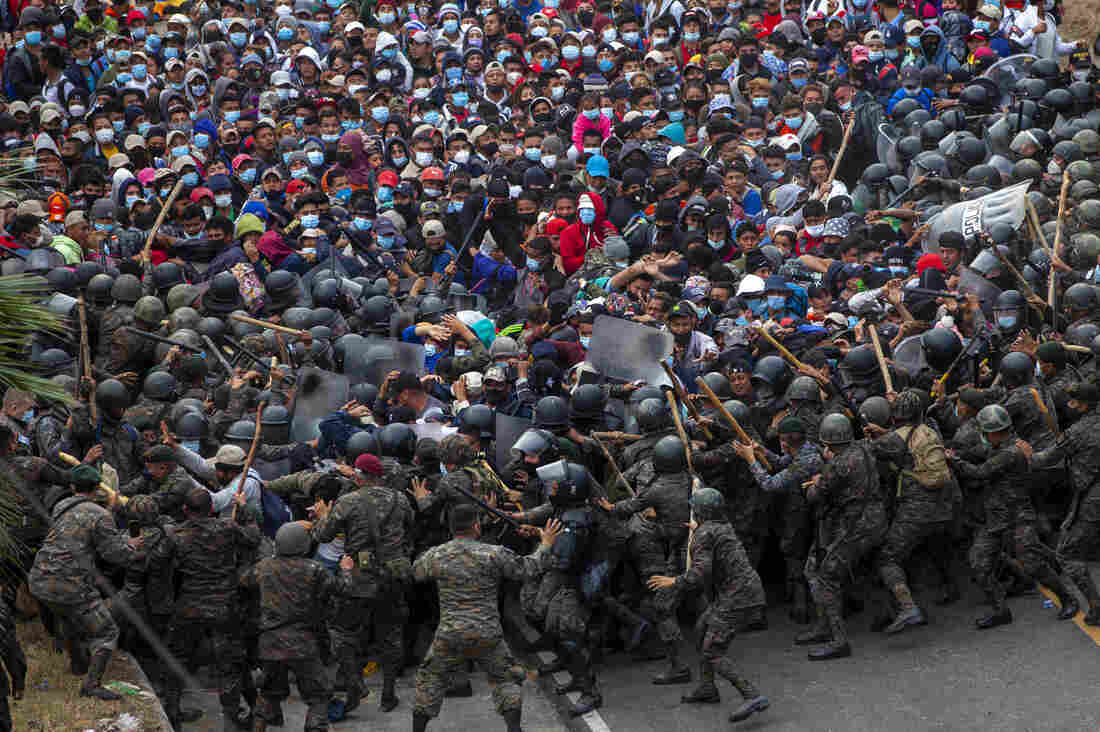 "I have hope and faith in God, and in the good person that the United States has chosen," he says.

"Biden is a good person and isn't the same as the administration that's just ended."

But his chances of making it to the U.S./Mexico border are far less than they were a few years ago. In October 2020, another caravan of Hondurans dispersed before it got across Guatemala, and Guatemalan officials said they sent more than 3,000 Hondurans home from that group.

In 2019, Mexico deployed National Guard troops to its southern border to deter Central Americans from trying to cross.

Ariel Ruiz Soto, a policy analyst at the Migration Policy Institute in Washington, D.C., says he doesn't think it's likely that many of the Hondurans in this current caravan will make it all the way to the U.S. frontier. "I suspect that if this caravan actually made it to the Guatemalan/Mexico border that there would be even the heavier presence of (Mexican) National Guard to try to detain the migrants," he says. "We saw this again in October. That caravan really stopped in Guatemala at that time. So I don't foresee them getting to the U.S./Mexico border in large numbers."

Before the pandemic, nationals from Guatemala, Honduras, El Salvador and Nicaragua were able to travel freely across each other's borders. Officials now are requiring a negative coronavirus test to cross. Some migrant advocates say this requirement is being used to block some refugees from seeking asylum abroad. 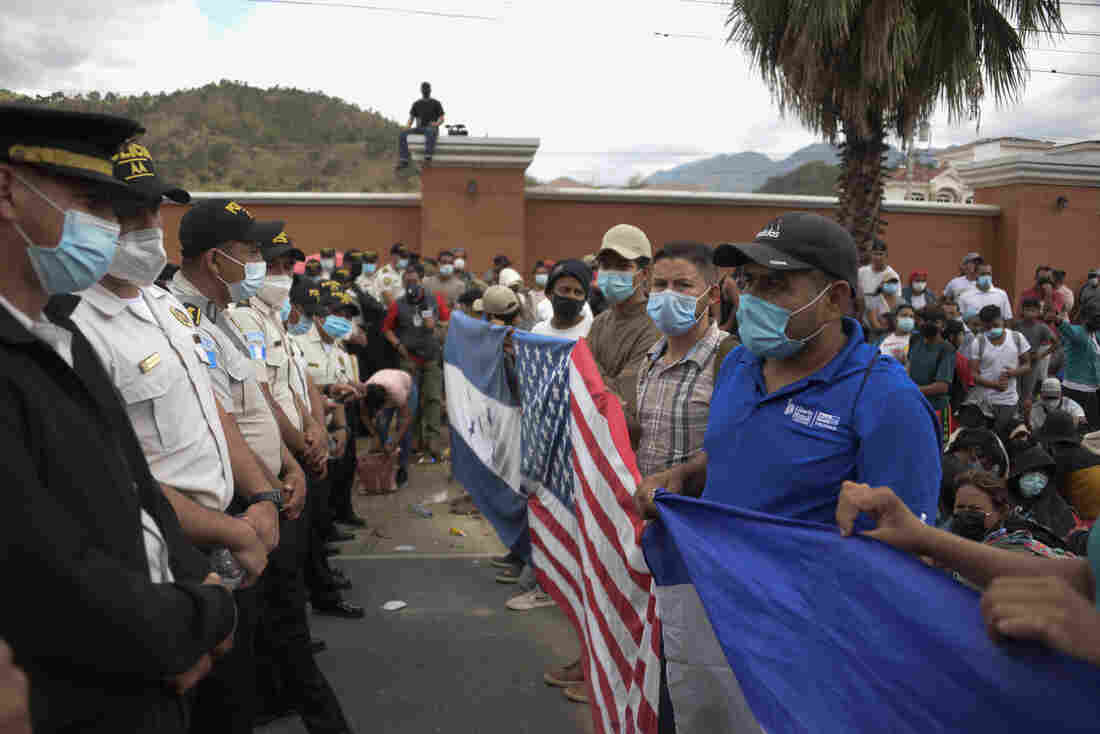 Honduran migrants, part of a caravan heading to the United States, stand in front of a police cordon in Vado Hondo, Guatemala on Sunday. Johan Ordonez/AFP via Getty Images hide caption

Tom Jawetz, vice president of immigration policy at the Center for American Progress, agrees with Ruiz that this current caravan is unlikely to turn into a crisis for the Biden administration during its first few weeks in office.

"In 2018, in advance of the election there were a lot people holding their breath about caravans that dissipated long before they ever came close to the United States border," Jawetz says.

Despite that, he says the incoming Biden team can't ignore immigration and the immigration policies of the outgoing Trump administration for long.

"A number of the steps that were taken by the last administration to try to deter people from coming to the country where not only illegal, but unconscionable," he says.

Humans have been migrating since prehistoric times. Migration isn't going to stop. Even if this caravan doesn't make it to the U.S. border, other migrants are already there waiting. Some other potential migrants may view the change in administration in Washington as an opportunity to try to enter.

"Even if that were the case, to what ends would you go in order to head that off?" Jawetz asks. "Would you have them violate U.S. law, international law, and prevent people from requesting asylum at the border? Would you have them take their children away in order to send fear into the hearts of families throughout the region?"

Soon after he takes office, Biden is going to have to face the big questions around what Jawetz calls the U.S.'s "broken" immigration system.