Accessibility links
Watching History From Afar, Some Harris Supporters Feel 'Robbed' Of A Big Moment For so many people, Kamala Harris' inauguration as vice president is a momentous occasion. But it is also a moment that has been stripped of much of the traditional pomp and circumstance. 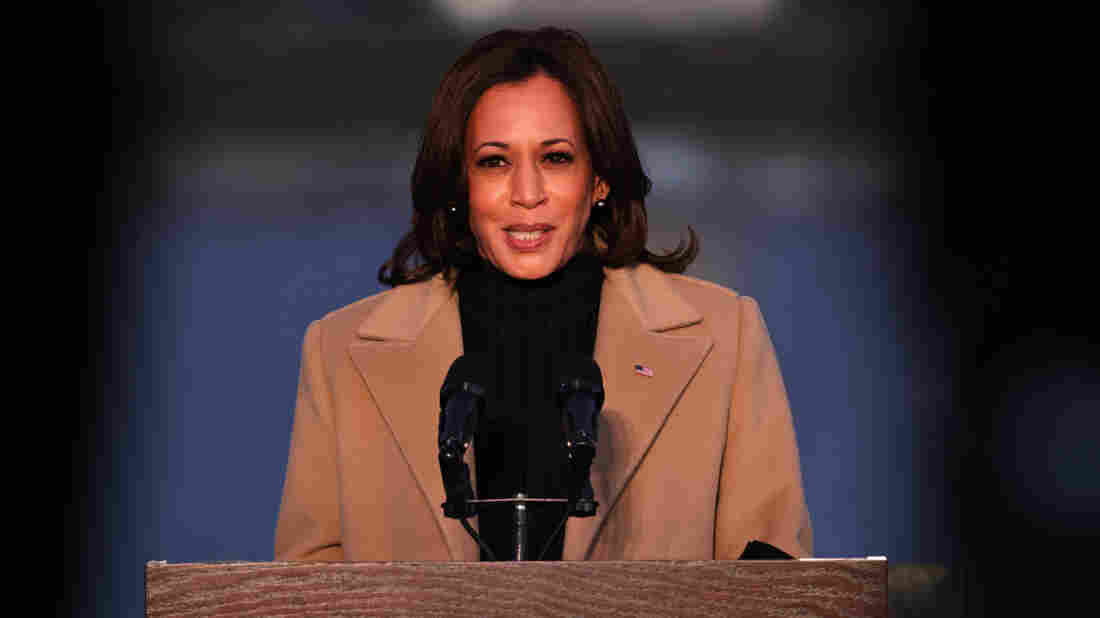 Vice President-elect Kamala Harris speaks at a memorial for victims of the coronavirus pandemic at the Lincoln Memorial on the eve of her inauguration as the first woman, first Black American and first person of Indian heritage to become vice president. Michael M. Santiago/Getty Images hide caption 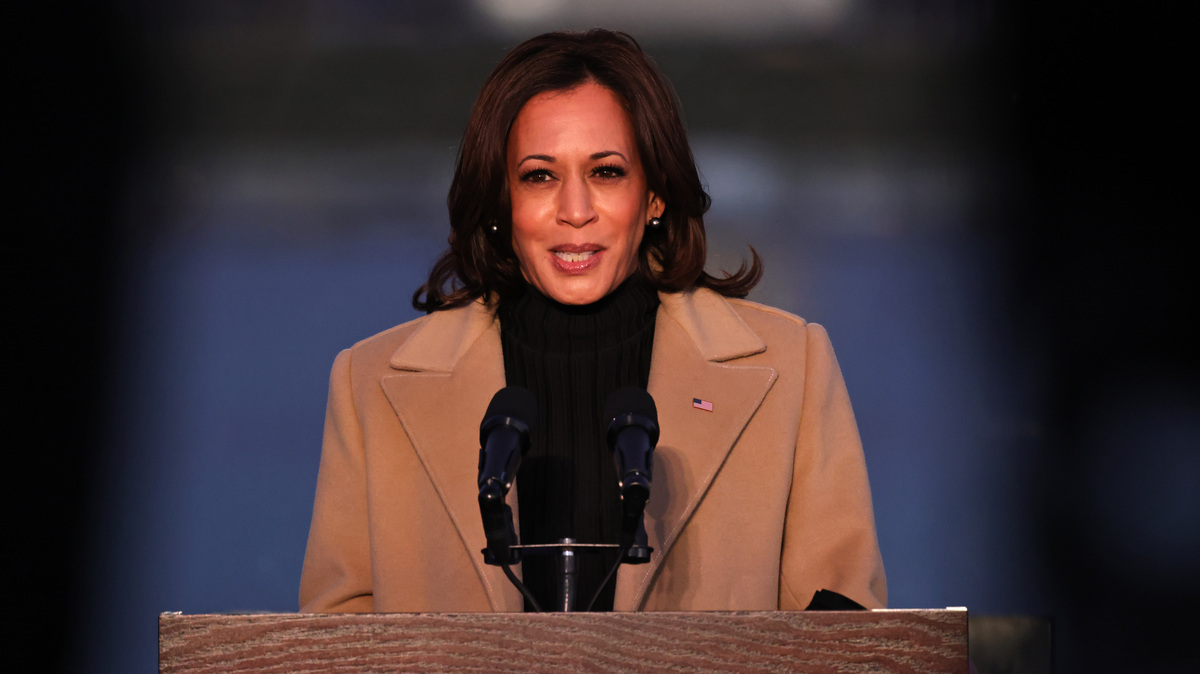 Vice President-elect Kamala Harris speaks at a memorial for victims of the coronavirus pandemic at the Lincoln Memorial on the eve of her inauguration as the first woman, first Black American and first person of Indian heritage to become vice president.

Before they gather virtually to watch the inauguration, students at YELLS, a nonprofit youth empowerment program in Marietta, Ga., will receive some special packages.

Each student will get a delivery that includes an American flag, a copy of the oath of office and a special set of pearls in honor of Vice President-elect Kamala Harris. YELLS staffers are encouraging their students to dress up to watch the ceremony, to make a ruckus with provided noisemakers. And after the ceremony, staff will guide them in writing letters to the new president and vice president.

"The staff all came together, we really made sure to let them know that we are going to celebrate this inauguration," said Sherri Burrell, a program coordinator for YELLS. "It's very, very important to us that they are witnessing, as one of the students did say, 'We are witnessing history, and we are also witnessing my future.' "

When Harris takes the oath of office on Wednesday, the daughter of Jamaican and Indian immigrants will become the first woman to assume the vice presidency. She will also be the first person of Black or Indian heritage to hold the office.

For so many people, the occasion of her swearing-in is a momentous occasion. But it is also a moment that has been stripped of some of the traditional pomp and circumstance.

"Can you imagine if we weren't in the pandemic? When I say Eastern Parkway in Brooklyn, N.Y., downtown, would be filled with people celebrating a Jamaican American is in the White House," said Burrell, who shares Harris' Jamaican heritage. "There are so many cultural reaches of her being in that office that we can't even celebrate. I think we were robbed of that celebration."

So much of the last year has required people to adjust expectations and carve out new traditions. And the inauguration is no exception, scaled down due to the pandemic and largely locked down after the insurrection at the Capitol. The weeklong extravaganza, complete with balls, public concerts and hours-long brunches, that usually marks a presidential inauguration can't happen this year.

But organizers have tried to fill that void.

One virtual celebration over the weekend put Harris' Jamaican roots front and center. The event, which was featured on One Caribbean Television and streamed online, celebrated "America's first Black Caribbean American" vice president.

"We are so proud of her ascendancy to this very important and historical position," Democratic Rep. Adriano Espaillat of New York told the virtual gathering. "As someone that has deep roots in Jamaica and South Asian roots as well, as the daughter of immigrants, it makes me proud as an immigrant and as a son of Dominican immigrants."

In a video message, Harris acknowledged the tradition of which she was a part.

"I'm proud to be with you as a vice president-elect with roots in the Caribbean," Harris said.

Pride in a historically black university

Cam Franklin launched the group, Ladies of Howard University, in the first weeks of the pandemic. The group hosted a fundraising brunch the weekend before the inauguration in honor of Harris, one of Howard's most well-known alumna.

"As you can imagine, the 10,000 women in the group are extremely excited to see her inaugurated into the vice presidency of the United States," Franklin said.

The "I Eat No for Breakfast" virtual brunch, which got its name from a Harris quotation, was hosted by celebrity chef Carla Hall, who is also a Howard alumna. The brunch featured themed selections such as a Bison Berry Rose Sorbet, named for Howard University's Bison mascot.

Money raised will go toward a scholarship fund for women who attend Howard, and Franklin hopes to turn the scholarship fund into an endowment, to make a positive outcome out of a bittersweet reality of being unable to gather in person.

"President Obama's inaugurations were like combination family reunions, conventions, homecoming — all together," said Franklin, who lives in Washington, D.C. "And so we're all mourning that a little bit, that we're not able to do that, but I tell you, Howard graduates, we're doing it up to the best of our ability virtually."

Chelle Wilson was in Washington for both of Obama's inaugurations. She remembered a conversation she had with her family in 2013 as the crowd that had gathered on the National Mall began to thin out: "I was sitting there with my children, and I said, 'You know what? The next time we come back, it will be when a woman is inaugurated president, and how exciting will that be?' "

In a year that hadn't been upended by a devastating pandemic, and in a year without heightened security across the nation's capital, Washington would have been awash this week with women wearing pink and green, the traditional colors of Alpha Kappa Alpha, the sorority that Harris pledged at Howard, and that she has said changed her life.

But not this year.

Instead, Wilson will put on her pink ballgown with green accents to celebrate not with her sorors in Washington, but at home in Frisco, Texas, with her husband and children. 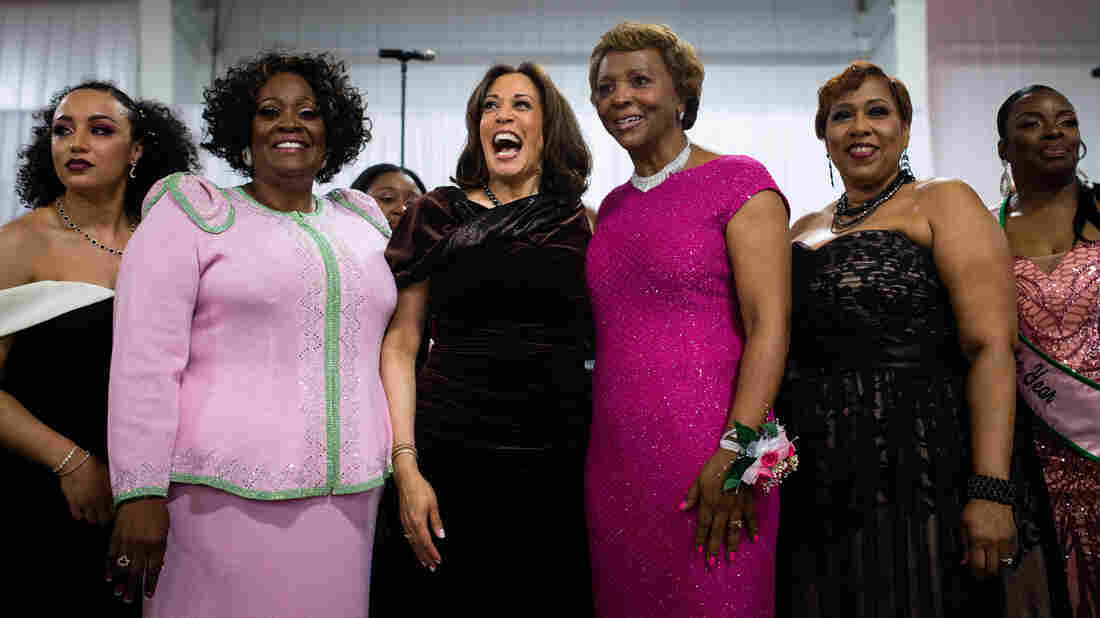 Shortly after launching her own presidential bid in 2019, Harris joined sorority members at Alpha Kappa Alpha's annual Pink Ice Gala in Columbia, S.C. Members of the sorority across the nation are celebrating one of their own making history as U.S. vice president. Elijah Nouvelage/Bloomberg via Getty Images hide caption 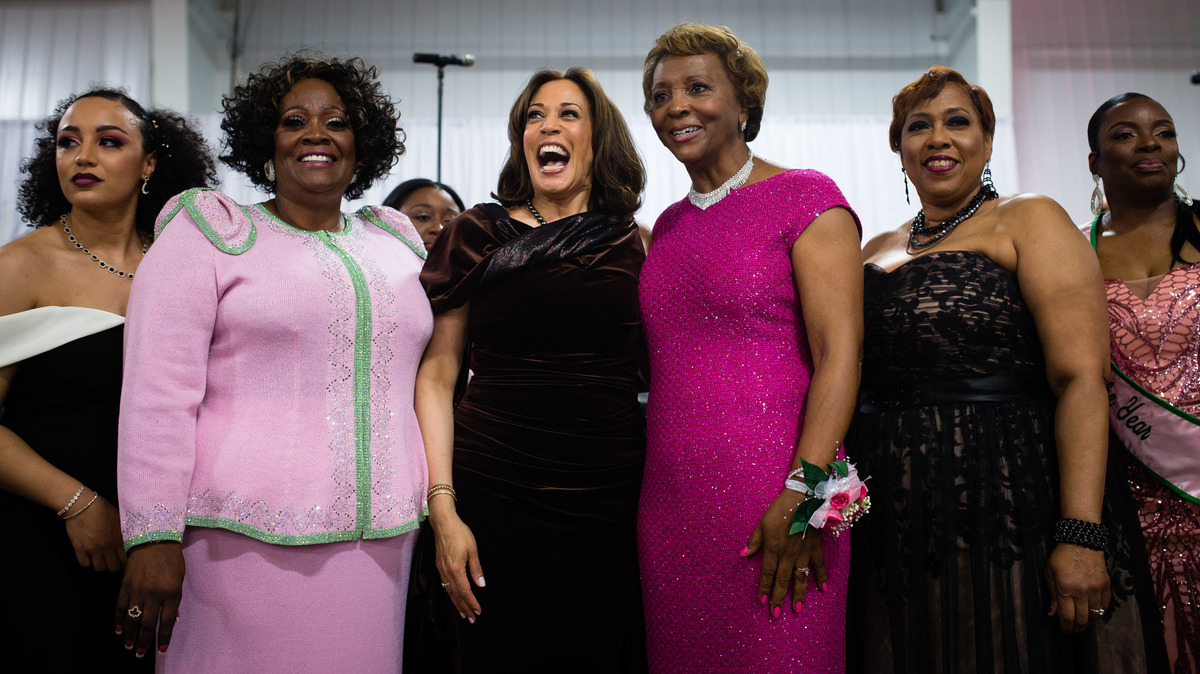 Shortly after launching her own presidential bid in 2019, Harris joined sorority members at Alpha Kappa Alpha's annual Pink Ice Gala in Columbia, S.C. Members of the sorority across the nation are celebrating one of their own making history as U.S. vice president.

"I have my fabulous, blinged out pink and green Converse Chuck Taylors that I will be wearing with them as I dance around my house celebrating the inaugural ball," said Wilson, who is Alpha Kappa Alpha's international secretary. "I'm actually even more excited that I don't have to wear it in person just in case I can't zip it all of the way up, because you know the quarantine weight struggle has been real!"

Wilson said she's hopeful that this is the first, but not the last, inauguration for Harris. And she won't miss the next one, for the world.

The safety of the incoming president and vice president are top of mind for many people, particularly after the crowd of pro-Trump insurrectionists descended on the U.S. Capitol on Jan. 6 in a violent assault on the peaceful transition of power.

That reality, coupled with the deadly pandemic that has forced all mass gatherings to be re-imagined, has meant that plans have had to change.

Anita Kirti said she and her immediate family are planning to pray together for Harris' strength and safety, joining with family members who live in India on a Zoom call.

"As excited as I am, I have the same magnitude of stress about how safe she will be considering what has happened in the Capitol a couple weeks ago," Kirti said. "Obviously, I hope that everyone is safe and OK, but I feel like she is a particular target because she is a woman of color, and that is pretty distressing."

Safety was also on Trish Kuper's mind. Kuper of Edmond, Okla., briefly lived on Capitol Hill after college and described what it was like to see such "ugliness that was in my backyard" two weeks ago.

"To see the very, very real threat of mortal danger, I believe that our elected officials were put into — I'm frightened terribly," she said. "God forbid something should happen to either one of them."

Kuper plans to watch the inauguration at home with her two adult daughters and her granddaughter, who is 17 months old. She has another on the way. She hopes that by the time they're old enough to understand, a woman in such a high leadership role will be commonplace.

"To see a woman take the office and to put her hand on the book and raise it, and to take that oath to the Constitution, which I as a federal employee have also taken, it's a powerful thing to say those words," Kuper said, adding, "I can hardly put it into words. It's something I kind of, in the back of my head, never thought I would really actually get to see, because I always was so worried that the system would be such that it would always be shot down."