Accessibility links
Rare Suicide Bombings In Baghdad Kill 32, Wound Over 100 Suicide bombings have been rare in the Iraqi capital since the country's military largely defeated the Islamic State group in 2017. But ISIS has reportedly claimed responsibility for the attacks. 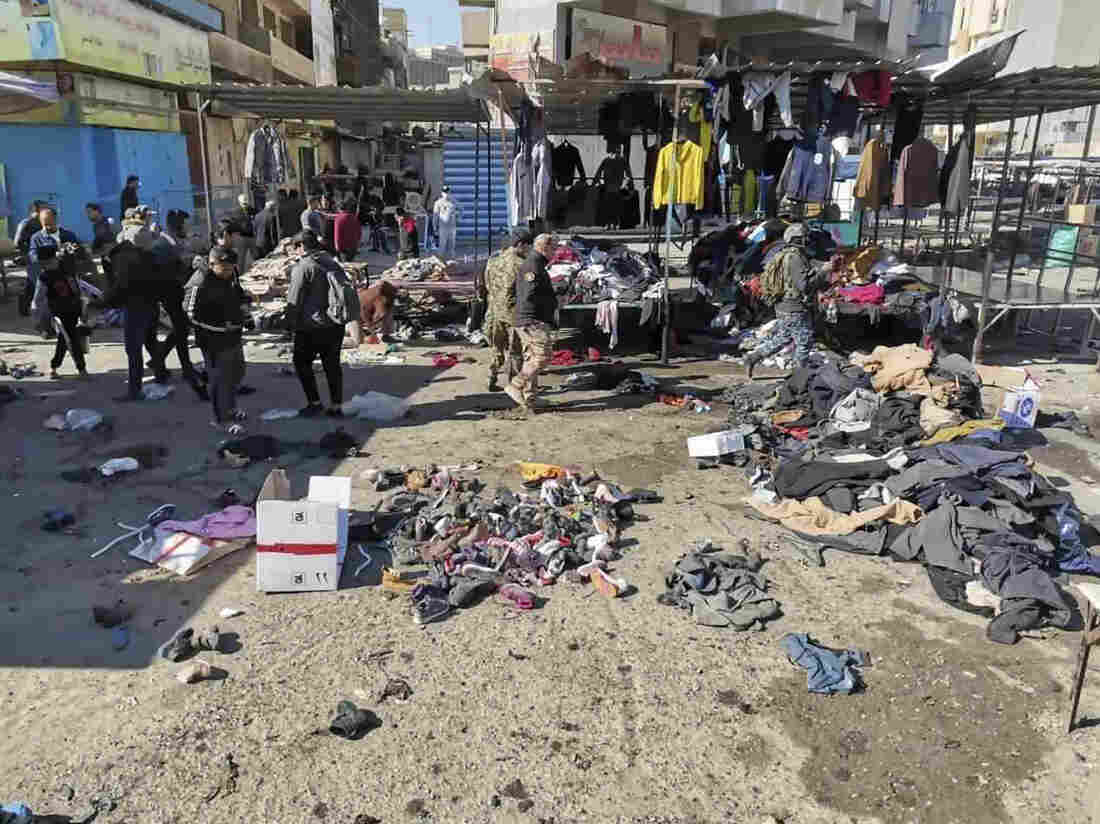 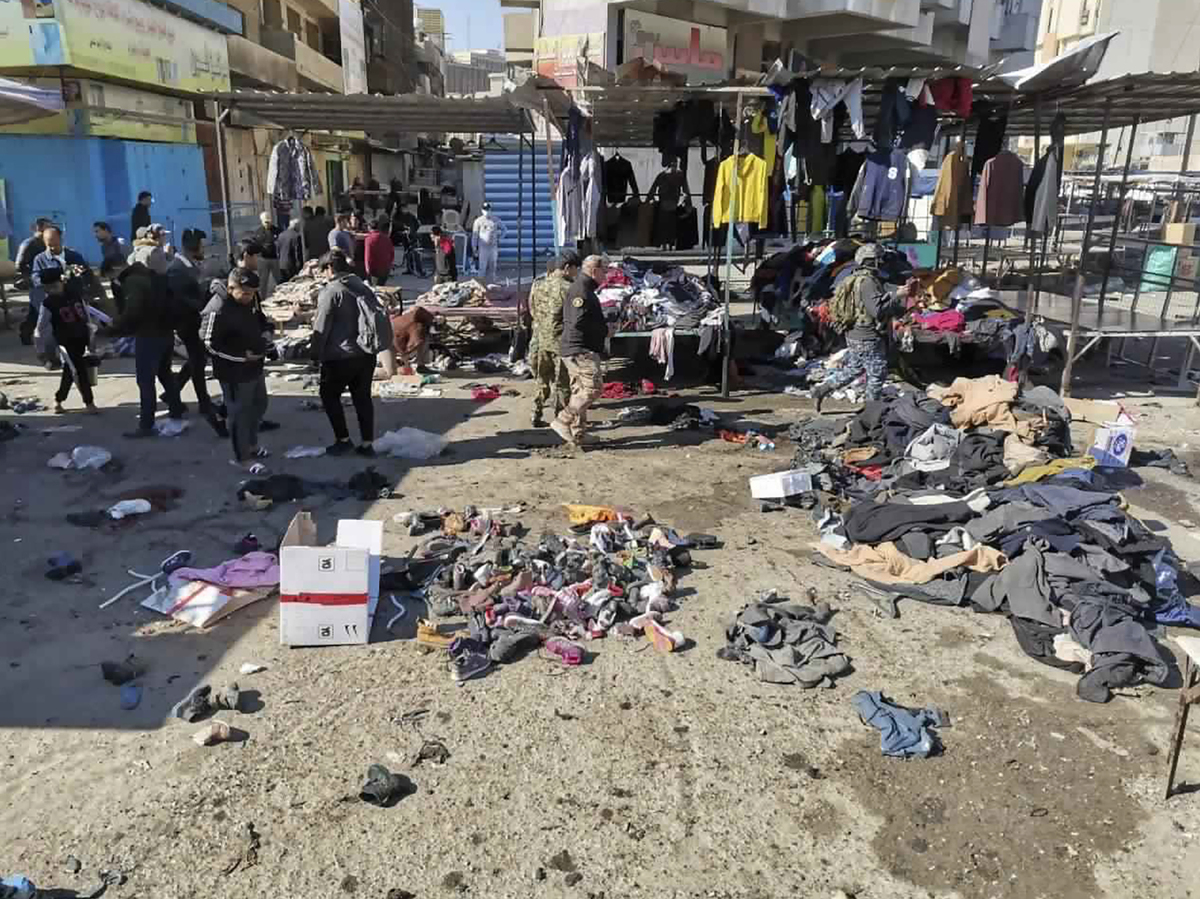 People and security forces gather at the site of deadly bomb attacks Thursday in a Baghdad market. The rare suicide bombings killed and wounded dozens of civilians.

Twin suicide bombings at a Baghdad market killed at least 32 people and injured 110 others on Thursday, according to Iraq's health ministry. Of the injured, 36 are being treated in hospitals.

ISIS has claimed responsibility for the attacks, according to the SITE Intelligence Group.

Two suicide bombers detonated their vests when security forces pursued them through a busy market off Tayaran Square. Witnesses said the first cried out he was ill, causing a crowd to form around him in a street off the main square. He then detonated the bomb he wore.

People fled toward Tayaran Square, Abdulkareem said. Police and an ambulance arrived. Then the second bomber detonated next to the ambulance as people gathered near the dead and wounded from the first blast.

This explosion killed dozens of people, including vendors, who sold items such as old bluejeans, tea and cellphone accessories.

People gathered Thursday evening at the site of the bombing, murmuring prayers and forming a makeshift vigil. The glow of candles illuminated piles of secondhand clothes in market stalls, some bloodied from the attack.

"We were shocked," Abdulkareem said, "because for some time there have been no explosions. The situation was safe, and people were optimistic."

This type of attack, once horribly common in the Iraqi capital, has become rare since the Islamic State group was largely defeated in the country in 2017. The last took place in January 2018, according to The Associated Press.

Across Baghdad, blast walls and checkpoints had been removed.

Maj. Gen. Tahsin al-Khafaji, a Joint Operations Command spokesman, said it was a "terrorist act perpetrated by a sleeper cell of the Islamic State," according to the AP.

"This attack is a reprehensible act of cowardice that underscores the dangers of terrorism that millions of Iraqis continue to face," the U.S. Embassy in Baghdad wrote in a statement. "We extend our condolences to the families of these victims, and hope for the swift recovery for those who were injured."

Although ISIS has been greatly weakened, with the help of Iraq's international allies, militant groups still conduct operations. Earlier this week, the electricity ministry reported coordinated attacks on power lines, power stations and other infrastructure, causing millions of dollars' worth of damage to the already-shaky electricity sector.

Renad Mansour, an analyst with British think tank Chatham House, told NPR that although ISIS may have been defeated on the battlefield, that doesn't rule out a renewed insurgency.

Mansour said the roots of ISIS lie in the fact that a large part of the population feels disenfranchised.

The terror group is Sunni Muslim, and has long drawn support from some of Iraq's Sunni minority who feel deeply discriminated against by a Shiite-led government.

Without a political settlement and an effort at inclusion, the conflict could continue to be cyclical, Mansour said.

The Trump administration reduced troop numbers in Iraq, but about 2,500 U.S. soldiers remain in the country. Retired Gen. Lloyd Austin, President Biden's defense secretary nominee, said in his confirmation hearing that he remains concerned about the threat ISIS poses inside Iraq and beyond.

"I support maintaining a small number of U.S. troops to carry out a limited mission focused on advising and assisting Iraqi counterterrorism forces to deal with the continuing threat from ISIS," he told the Senate Armed Services Committee in written testimony.

Iraq analyst and Baghdad resident Hamzeh Hadad said the attack was shocking because the overall security situation in the Iraqi capital has improved dramatically in recent years. Fewer checkpoints and blast walls mean "you're slowly seeing the beauty of the city come back to life," he said. "Things are busier again, markets are bustling."

Hadad moved from Canada back to Iraq in 2019, partly because the danger of such attacks appeared to have been reduced.

"So to have something like this reoccur — that hasn't happened in a few years — is really shocking and worrying for everyday Iraqis," he said.