Accessibility links
Coronavirus Crisis Gets 'Even Worse' In Brazilian Amazon City Of Manaus Another surge in coronavirus cases has collapsed Manaus' health system, leading hospitals to run out of beds and oxygen for patients. It's also having a deadly fallout in nearby communities.

Coronavirus Crisis Gets 'Even Worse' In Brazilian Amazon City Of Manaus

Coronavirus Crisis Gets 'Even Worse' In Brazilian Amazon City Of Manaus 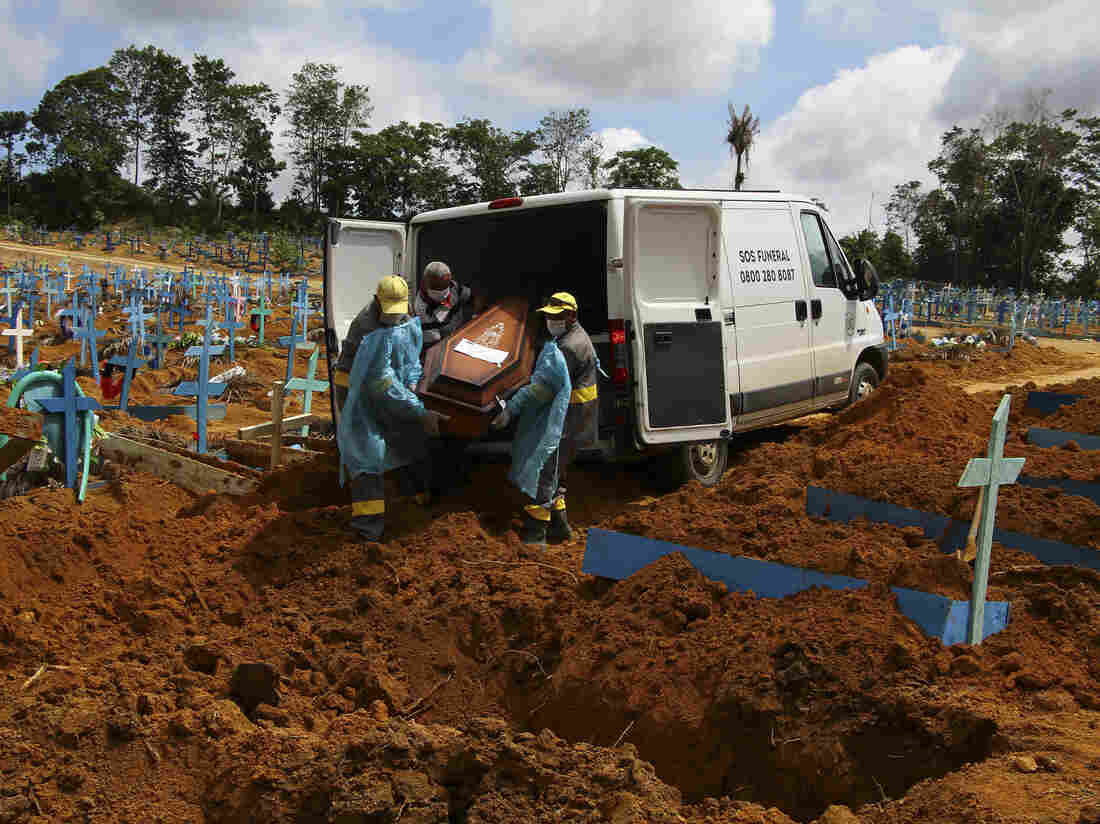 Cemetery workers carry the remains of 89-year-old Abilio Ribeiro, who died of the new coronavirus, for burial at the Nossa Senhora Aparecida cemetery in Manaus, Amazonas state, Brazil, on Jan. 6. The day before, Manaus declared a 180-day state of emergency due to a surge of new cases of the coronavirus. Edmar Barros/AP hide caption 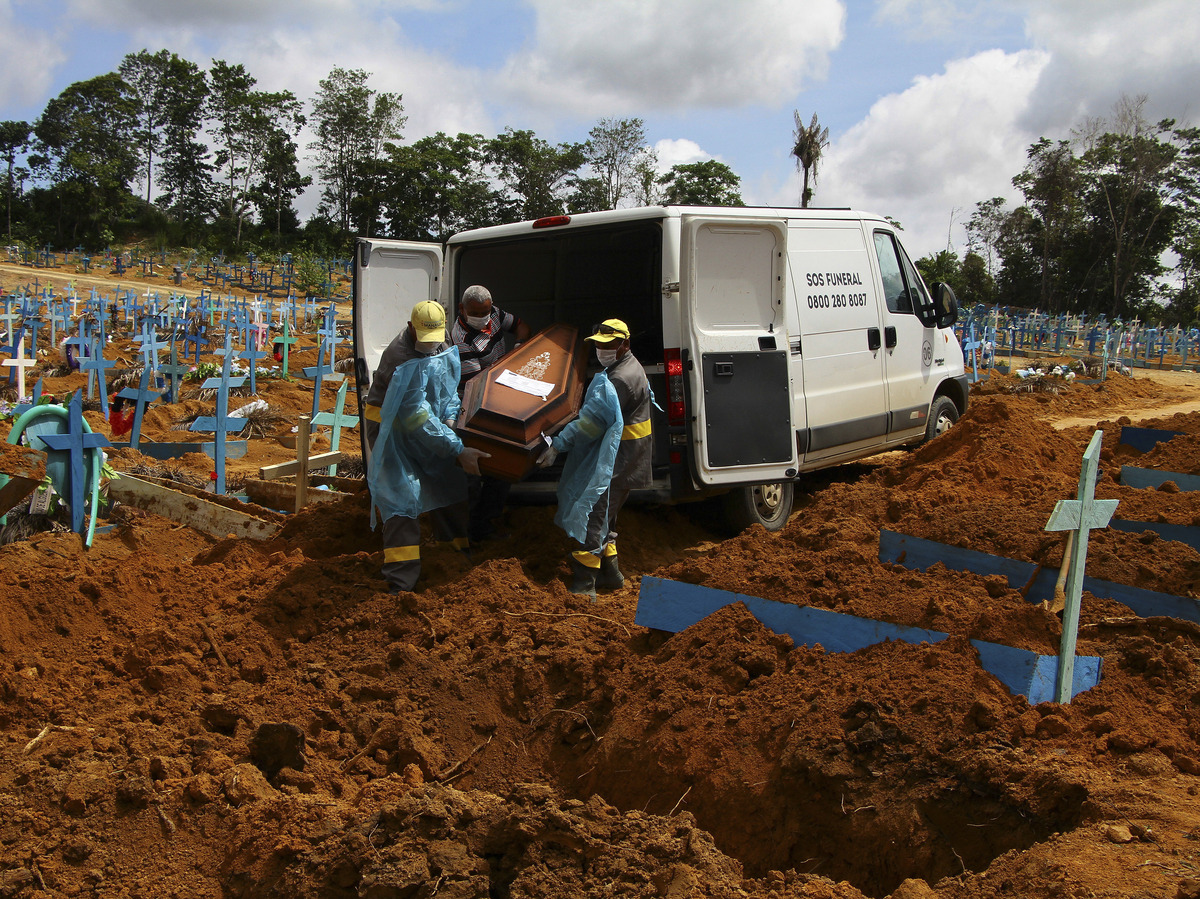 Cemetery workers carry the remains of 89-year-old Abilio Ribeiro, who died of the new coronavirus, for burial at the Nossa Senhora Aparecida cemetery in Manaus, Amazonas state, Brazil, on Jan. 6. The day before, Manaus declared a 180-day state of emergency due to a surge of new cases of the coronavirus.

When the health system first collapsed in the Amazonian city of Manaus, Brazil, and COVID-19 victims were buried in mass graves, the mayor sent a desperate appeal to then-President Donald Trump and other world leaders.

"We are doing our best, but I tell you, it's still very little in [the] face of the oncoming barbarism" said Arthur Virgílio Neto in a video message. "We cannot be silent. We need all possible help."

The mayor argued that Manaus, with a population of more than 2 million, acts as a custodian of the surrounding rainforest and that it was the outside world's turn to reciprocate and "look after people of this land."

That was back in May. Virgílio, 75, left office when his term ended eight months later. Now he is helplessly watching a second wave of the pandemic engulf his city and bring death and havoc within the forest.

"This time, it's even worse," he told NPR by Skype.

The public health system in Manaus collapsed again this month. An unprecedented surge in coronavirus cases has led to an acute shortage of oxygen. The local manufacturer could only meet a fraction of the demand.

Some hospital patients have been forced to share cylinders, while others have died in bed from suffocation, according to health workers and patients' families.

Scientists say there is evidence that at least one new highly infectious variant of the coronavirus has emerged in the area, and that this is likely powering the sharp rise in cases.

The Worst Of COVID-19 Should Be Over For 1 Hard-Hit Brazilian City. But It's Not

Reports from the city provide heart-rending glimpses of the impacts of the accelerating pandemic. These include images from the increasingly overcrowded main cemetery: The daily average for burials there in the past week is 185, about six times higher than the prepandemic level, according to Manaus city hall figures.

On Wednesday, Brazil's Globo TV affiliate, Rede Amazônica, showed footage of a crowd of people in Manaus who lined up for hours outside a private oxygen supplier, hoping to refill cylinders or buy new ones. 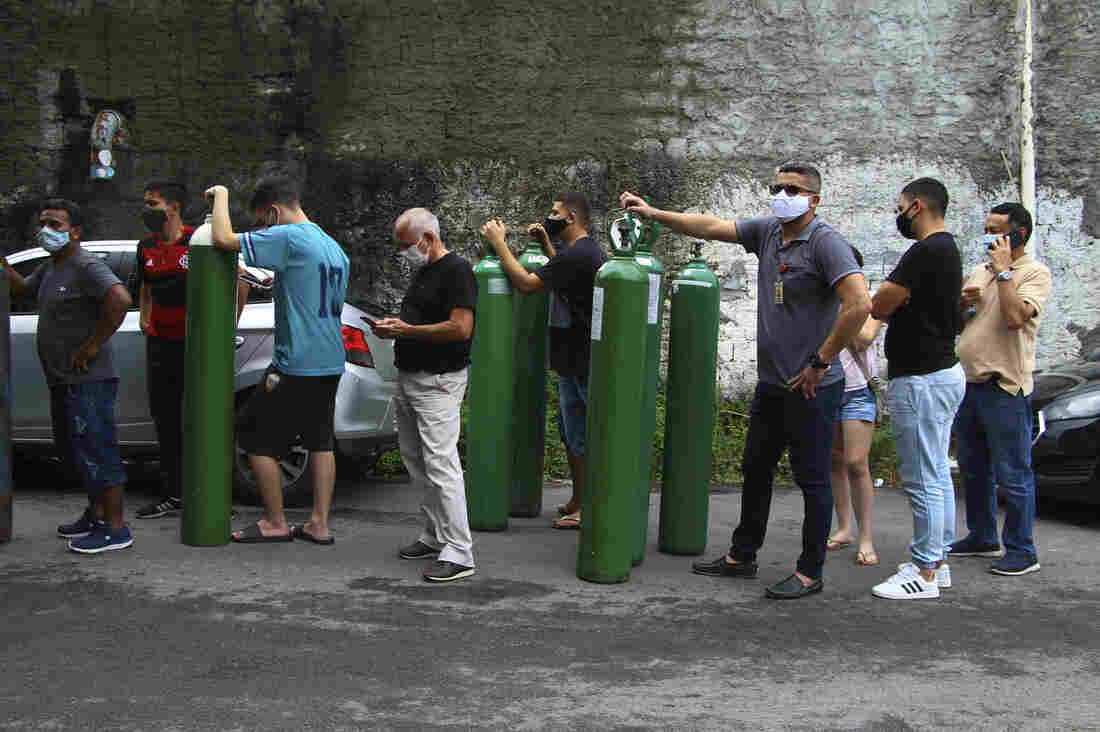 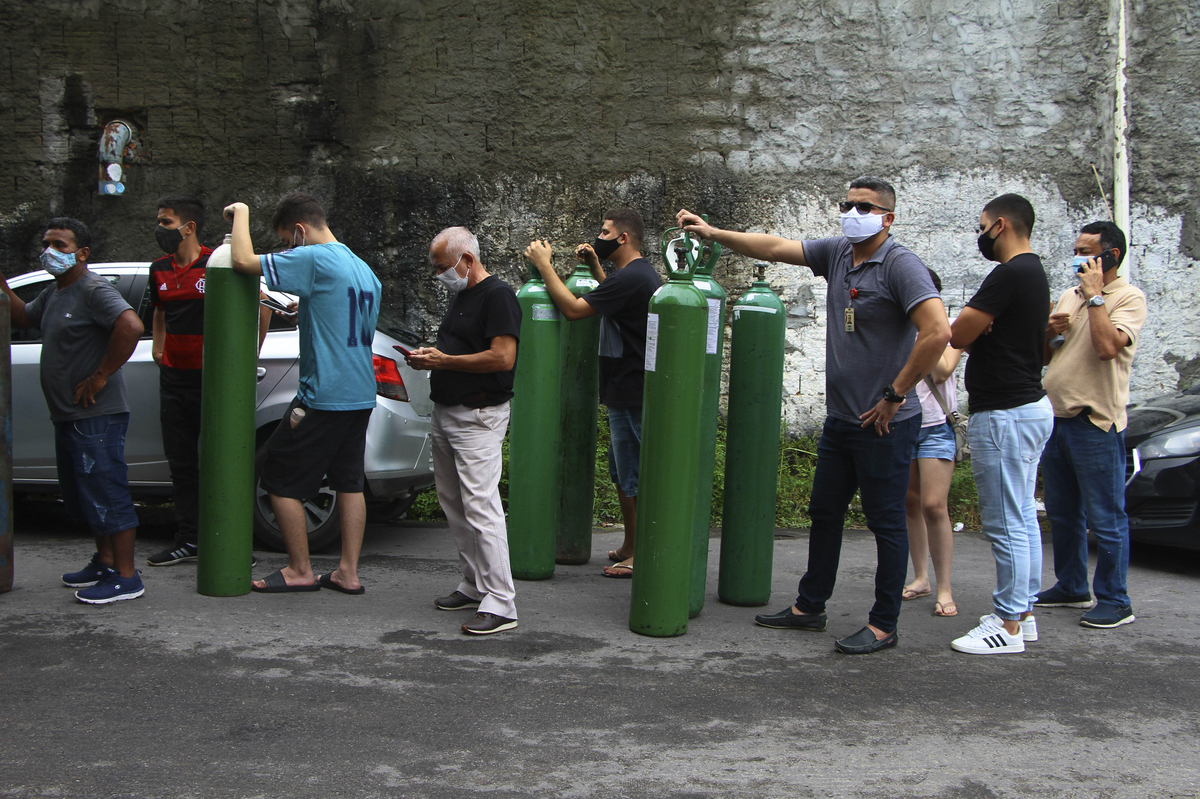 Relatives of patients hospitalized with COVID-19 line up to refill empty oxygen tanks outside the Nitron da Amazônia company, in Manaus, Amazonas state, Brazil, on Jan. 15.

The channel showed dozens of trucks and cars waiting to transport cylinders to COVID-19 patients, some of whom are at home because they are fearful of going to hospital, or because there are no available intensive care beds.

Hours earlier — after dark on Tuesday night — five tanker trucks carrying oxygen rumbled into the city after a nearly four-day journey, much of it through the forest. They traveled there from neighboring Venezuela, on the orders of socialist President Nicolás Maduro.

Plagued by shortages of staff, medicines and even water, Venezuela's public health system has been in deep disarray since long before the pandemic began. Yet Maduro's gift to Manaus secured him a propaganda victory at home, and the irresistible opportunity to humiliate his archenemy Jair Bolsonaro, Brazil's far-right president.

They could have survived

Manaus is the capital of Brazil's giant rainforest state of Amazonas. The city's health crisis is having a deadly fallout in the region, as the coronavirus spreads to faraway towns only accessible by river or plane.

Doctors Without Borders, the international medical aid group also known by its French initials, MSF, has teams working with COVID-19 patients in several remote Amazon communities. It says doctors have been unable to refer critical patients to Manaus because hospitals there "are full and struggling to keep up with the current demand." 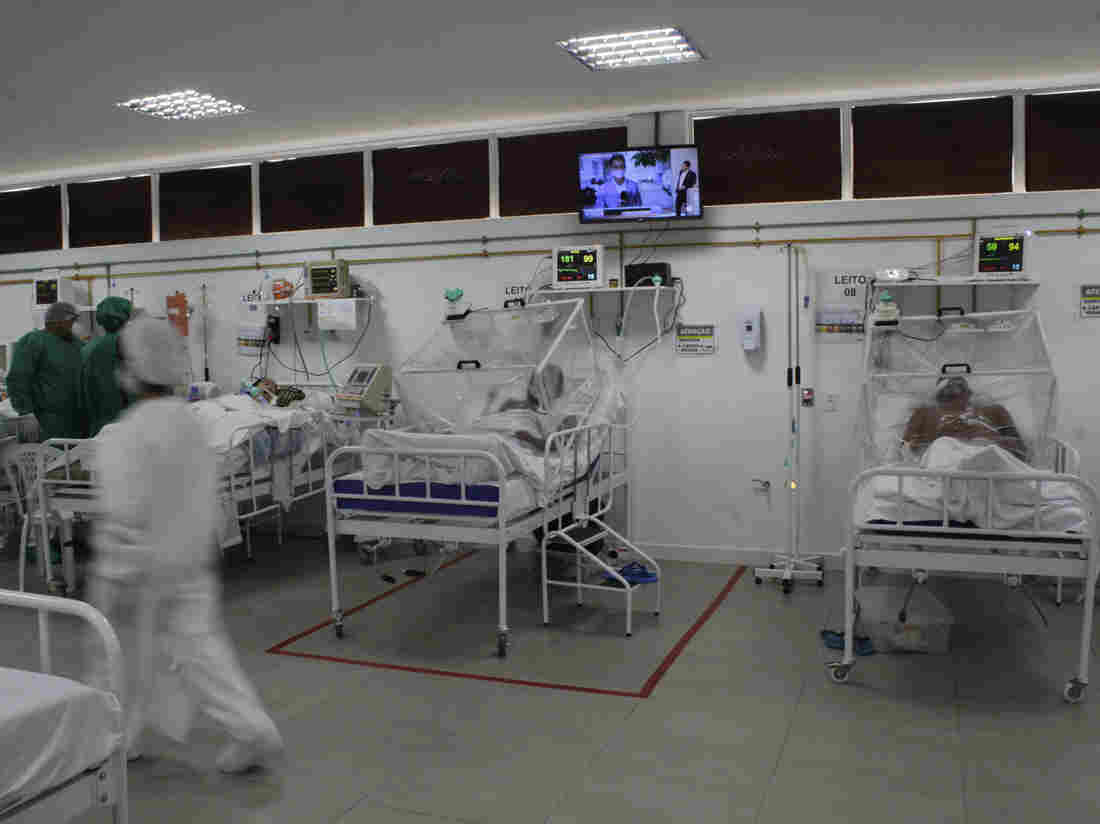 Health staff treat patients with COVID-19 at the Gilberto Novaes Field Hospital on May 28 in Manaus, Brazil. Sandro Pereira/Sipa via AP hide caption 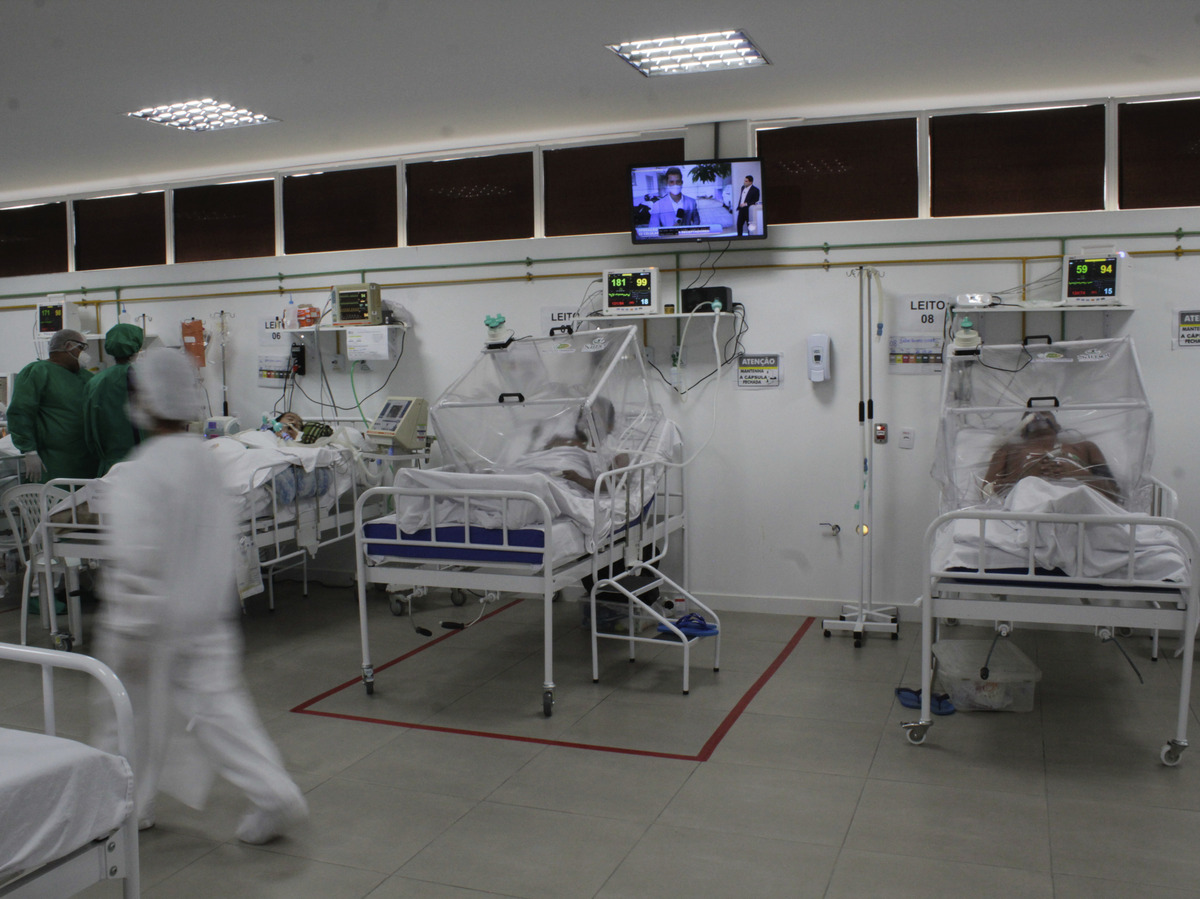 Health staff treat patients with COVID-19 at the Gilberto Novaes Field Hospital on May 28 in Manaus, Brazil.

MSF says three patients died in the last week in Tefé, a river town about 370 miles southwest of Manaus. They "would have had a chance to survive if they had received care in a big city hospital," said Pierre Van Heddegem, the medical aid organization's mission chief for Brazil.

Officials in Coari, another town in the Amazon River basin, said seven COVID-19 patients died there on Tuesday because of a lack of oxygen. They blamed "irresponsible" state authorities for a delay in oxygen deliveries from Manaus. A plane carrying 40 cylinders eventually arrived in Coari — one hour after the victims' oxygen ran out, they said.

Government human rights workers in municipalities around Amazonas say 30 lives were lost in six days because of a lack of oxygen or the inability to transfer patients. They have begun legal action to try to force state authorities to come up with an emergency plan.

The forest is huge. Communications are poor. Real numbers are likely higher.

The chaos in the Amazon is adding to the pressure on Bolsonaro, who now faces a backlash over Brazil's bungled national vaccination program, his record of scoffing at the virus and his baseless insistence that the anti-malarial drug hydroxychloroquine is effective against COVID-19.

He is using Brazilian Air Force planes to deliver emergency oxygen supplies. The Brazilian Defense Ministry says it made 45 flights in the week after the oxygen crisis began, carrying more than 2,600 cylinders to Manaus and also a dozen oxygen generators. Some of these supplies will be delivered by river barge to communities around the forest.

This will not absolve him from what the medical community views as his deeply negligent response to the pandemic in Brazil, which has so far recorded more than 214,000 COVID-19 deaths, more than any other nation except the U.S.

"The president always gives excuses: 'It was the mayor's fault. It was the governor's fault.' It was because they were not using chloroquine," says Dr. Marcus Vinícius Lacerda, an infectious disease specialist at the Dr. Heitor Vieira Dourado Tropical Medicine Foundation in Manaus. "He always has a good excuse to explain why people are dying."

Bolsonaro has "no clue" about COVID-19, Lacerda says. "People around him repeat whatever he says," he adds, "it is the craziest thing I've ever seen."

Lacerda is one of the 240,000 people who have so far caught the coronavirus in Manaus and the surrounding state. He is now recovering.

So is the city's former mayor. Virgílio spent one month in the hospital. He is now back home — wondering what his message would be to world leaders in the face of the pandemic's second lethal wave, ripping through his city.

"I wouldn't know how to live if I was responsible for these deaths that are so cruel and nasty," he said, in a message to NPR this week.

"It's a picture of horror."