Accessibility links
Protests Sparked In Tacoma After Police Officer Drives Into Crowd Protesters took to the streets of Tacoma, Wash., after several people were struck and at least two were injured. The officer was placed on paid administrative leave.

Protests Sparked In Tacoma After Police Officer Drives Into Crowd

Protests Sparked In Tacoma After Police Officer Drives Into Crowd 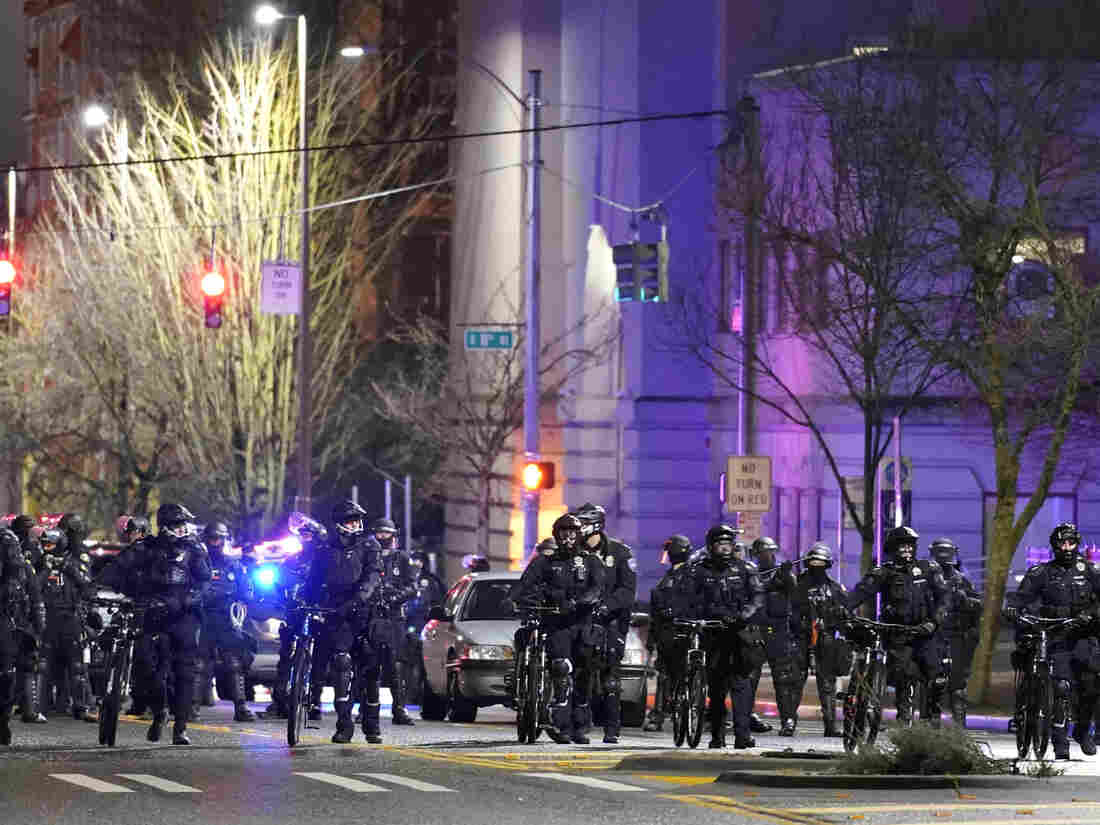 Police and other law enforcement officials stand in a line as protesters approach Sunday in the street in front of the City-County Building in Tacoma, Wash. Ted S. Warren/AP hide caption 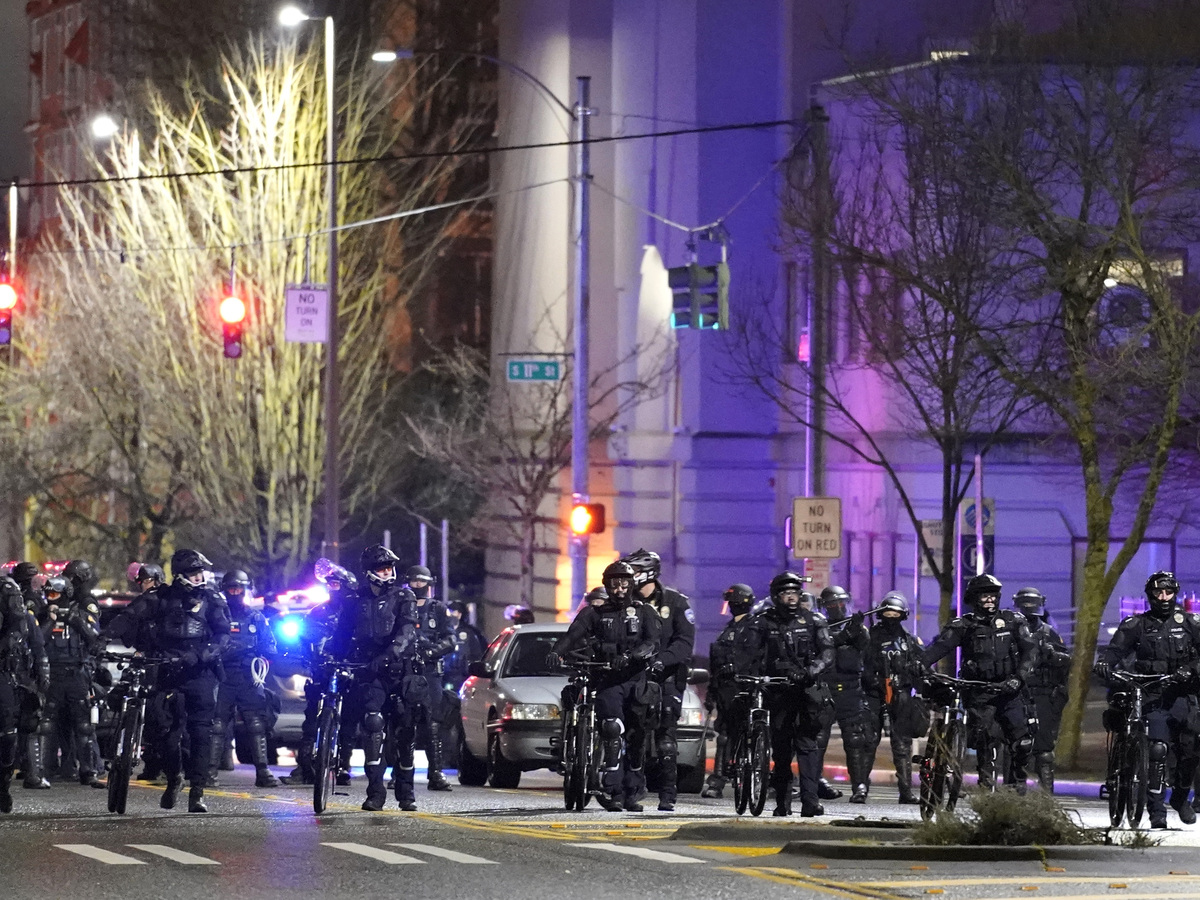 Police and other law enforcement officials stand in a line as protesters approach Sunday in the street in front of the City-County Building in Tacoma, Wash.

Protests erupted late Sunday in Tacoma, Wash., in response to an incident a day earlier in which a police officer used his patrol vehicle to plow through a crowd, hitting several people and injuring at least two.

The incident involving the police officer was captured on cellphone video and posted on social media. Law enforcement officials said the officer, who was not named, is on paid administrative leave during an investigation.

Police said he was a 58-year-old male and has been with the force for nearly 30 years.

Tacoma police have turned over the investigation to the Pierce County Force Investigation Team for an independent review.

Videos on social media show the police vehicle surrounded by a crowd. The vehicle slowly backs up a few feet, then lurches forward, bowling over several people. At least one person is seen being run over by the right passenger-side wheel of the police vehicle.

Some in the crowd scream in horror.

Those who took to the streets in the city's downtown area on Sunday evening were carrying signs that read: "Defund TPD," the abbreviation for Tacoma Police Department, according to a report by The Seattle Times. The paper noted others were seen causing property damage such as spray-painting graffiti on office buildings and breaking windows of a bail bonds office and a municipal building.

As the night progressed, demonstrators made their way to the Pierce County Jail, shouting at people inside, the newspaper reported, before police on bicycles eventually created a line blocking protesters.

Crowd stooped outside what appears to be the Tacoma jail, rousing inmates. pic.twitter.com/pIo0cb5LHn

Another video from the Sunday protests and posted on Twitter appears to show an American flag on fire in the middle of a street.

There were about 150 demonstrators, a Tacoma police spokesperson told NPR on Monday. A number of fires were set, but none caused property damage, the spokesperson added. Officials said there were no protest-related arrests overnight or reports of police injured during the unrest. 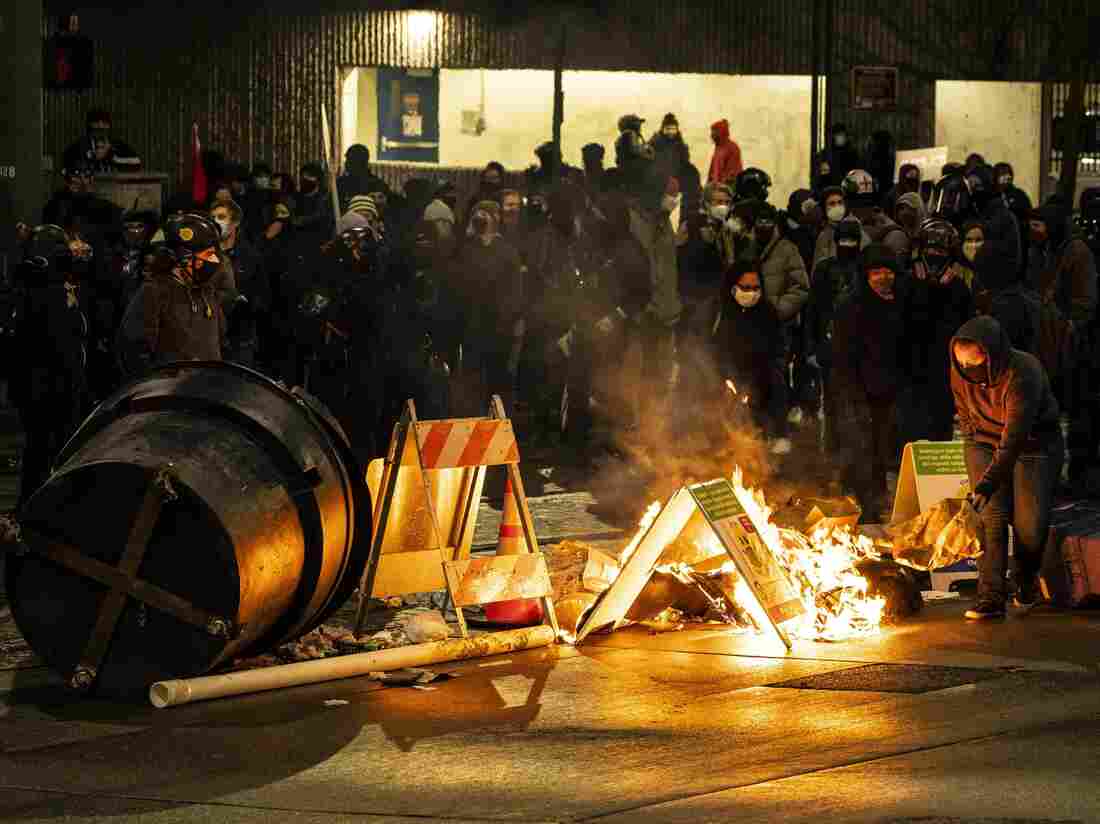 A demonstrator adds fuel to a burning barricade in an intersection in downtown Tacoma during an anti-police protest Sunday. David Ryder/Getty Images hide caption 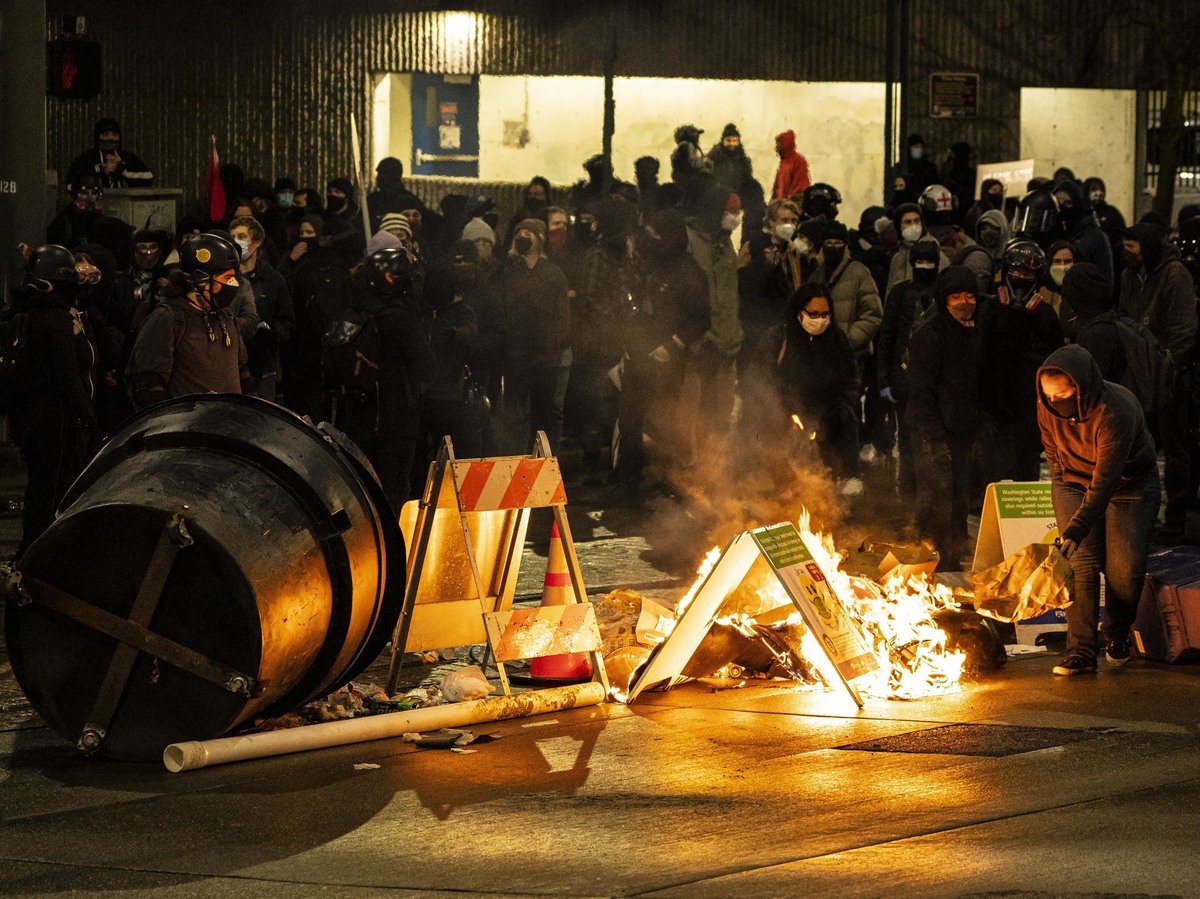 A demonstrator adds fuel to a burning barricade in an intersection in downtown Tacoma during an anti-police protest Sunday.

The demonstrations were sparked after an incident Saturday night when police responded to a reports of street racing near South Ninth Street and Pacific Avenue, according to KCPQ, a Fox affiliate in Seattle.

At 6:19 p.m. Saturday, police began receiving calls about vehicles and roughly 100 people blocking the intersection, according to police. When officers arrived, police officials said, they began to clear the area "for the safety of those gathered and people trying to use the street."

At one point, the unnamed officer, who was inside his service vehicle, was surrounded by a crowd, and law enforcement officials said the officer attempted to "extricate himself from an unsafe position."

"People hit the body of the police vehicle and its windows as the officer was stopped in the street," Tacoma police said a statement.

"The officer, fearing for his safety, tried to back up, but was unable to do so because of the crowd. The officer had his lights and sirens activated. While trying to extricate himself from an unsafe position, the officer drove forward striking one individual and may have impacted others."

Police said that once the officer was away from the crowd he called for medical aid, and one person was taken to the hospital.

"I thought what we would see once police arrived was a settling or breaking up of the scene," Mark Mathura, one of the people who posted video of Saturday's incident online, told Seattle-area NPR member station KUOW.

"But what happened was the exact opposite," Mathura said.

"I am concerned that our department is experiencing another use of deadly force incident," interim police Chief Mike Ake said in a statement afterward. He vowed the police department was cooperating with the independent investigation.

"As a use of deadly force, this incident is being taken very seriously and the scene has appropriately been turned over to the Pierce County Force Investigation Team for independent investigation," Woodards said. "As we learn the facts of the case, I have called on the City Manager and Police Chief to ensure that everyone involved is held accountable."