Accessibility links
Gina Raimondo Testifies At Senate Confirmation Hearing Rhode Island Gov. Gina Raimondo, expected to oversee the U.S. Census Bureau as the next commerce secretary, says she will "rely on the experts" at the agency to ensure the 2020 census is accurate. 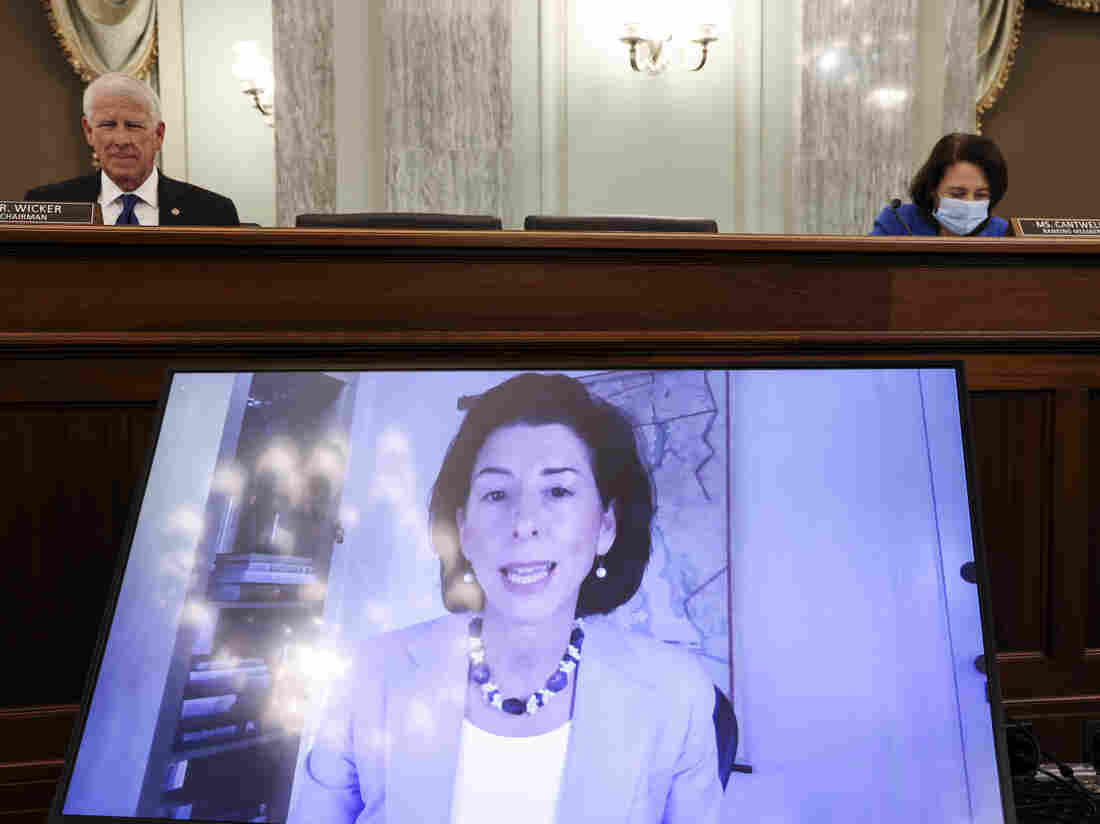 Rhode Island Gov. Gina Raimondo appears through video conferencing Tuesday during a Senate hearing for her nomination as the secretary for the Commerce Department, which oversees the U.S. Census Bureau. Jonathan Ernst/Bloomberg via Getty Images hide caption 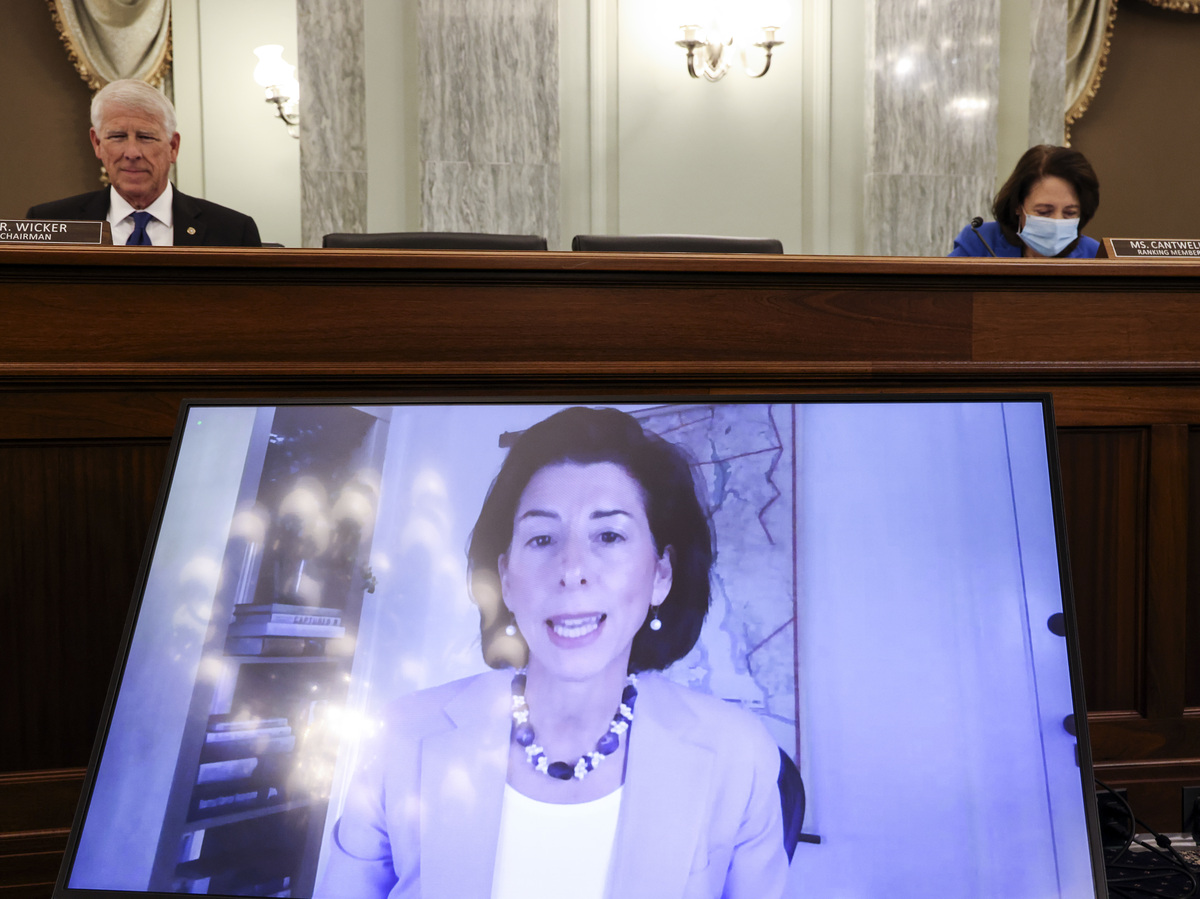 Rhode Island Gov. Gina Raimondo appears through video conferencing Tuesday during a Senate hearing for her nomination as the secretary for the Commerce Department, which oversees the U.S. Census Bureau.

President Biden's nominee for overseeing the U.S. Census Bureau, Rhode Island Gov. Gina Raimondo, said she intends to depoliticize the 2020 census and listen to experts at a federal agency that had been caught in a partisan firestorm during the Trump administration.

"I believe that we need to take the politics out of the census, and we need to rely on the experts," Raimondo, a Democrat, told lawmakers Tuesday. "The experts and statisticians in the Census Bureau are top-notch, so I, once confirmed, intend to rely on them."

Raimondo's comments during a confirmation hearing before the Senate Commerce Committee were the governor's first public remarks about the national head count since becoming Biden's pick for secretary of the Commerce Department, which oversees the bureau.

"The previous administration harmed the nonpartisan history of the Census Bureau," said Sen. Kyrsten Sinema, D-Ariz., a committee member who referenced Trump officials' failed efforts to change the census process in ways that could have politically benefited Republicans when determining representation in Congress and the Electoral College as well as redrawing voting districts across the United States.

Despite civil servants' warnings about the risks of depressing census participation and jeopardizing the count's accuracy, Trump officials pushed to add a citizenship question to last year's census forms and attempted to exclude unauthorized immigrants from counts that, according to the Constitution, must include the "whole number of persons in each state."

"It's generally believed that because of the pandemic and because of [the Trump] administration's inability to get things right, the census numbers aren't right," warned Sen. Jon Tester, D-Mont., who expressed particular concerns about undercounting last year in rural communities and in Indian Country.

Raimondo, who participated in Tuesday's hearing from Rhode Island through video conferencing, deferred on offering specific suggestions for improving the census data's accuracy.

While the opening remarks of the committee's incoming chair, Sen. Maria Cantwell, D-Wash., noted the need for a "less political" census process, questions about the count — which all came from Democrats — were not asked until more than an hour into the hearing, during which Raimondo fielded questions on topics ranging from fisheries to the digital divide.

In response to the first census-related question, posed by Sen. Brian Schatz, D-Hawaii, Raimondo said she would "follow the lead" of statisticians and other experts at the bureau if they advise that more time is needed to review the census data before their release.

The bureau is expected to keep running quality checks on the results until early March, when the agency has projected it will release the state population counts used to reapportion congressional seats and Electoral College votes among the states.

The delays have resulted in the federal government missing a key census milestone on Monday — the legal deadline for the clerk of the House of Representatives to certify each state's new share of House seats according to the 2020 census results.

Congress, however, is likely to step in to formally extend the legal reporting deadlines, which Democratic lawmakers have been prepared to do in response to COVID-19 as initially requested in April 2020 by the Trump administration before officials abandoned the proposal months later.

In a written response to a committee questionnaire last week, Raimondo did not reference the census when asked to outline the "top three challenges" facing the Commerce Department.

As recently as last month, the Government Accountability Office — which still includes the 2020 census on its list of high-risk government projects — reported to lawmakers that the national head count faces challenges to data quality and accuracy in light of disruptions from the coronavirus pandemic and last-minute schedule changes by the Trump administration.

"The Census Bureau will need to be transparent in discussing any shortfalls in the data that were collected due to limited operations," Sinema told Raimondo during the hearing.

Raimondo, the first woman to lead Rhode Island, is expected to secure a Senate confirmation.

"I do not believe you will be serving as governor of the state of Rhode Island for very much longer," Sen. Roger Wicker, R-Miss., the outgoing chair of the Senate Commerce Committee, said before ending Tuesday's hearing.

But the timing of when Raimondo would take over from the current acting commerce secretary — Wynn Coggins, a career official — remains unclear. A final confirmation vote is not likely until after Feb. 1, the deadline for Raimondo to submit written responses to any follow-up questions from committee members.

Meanwhile, the Biden administration has been lining up other Commerce appointees who do not require lawmakers' approval and will have a hand in planning for the last stages of the 2020 census — including new senior adviser Meghan Maury, who has been the policy director at the National LGBTQ Task Force.

In sharp contrast to the most recent series of Trump administration appointees at the bureau, Maury joins with a long track record of following the 2020 census and the agency's other work. Last year, Maury finished a six-year volunteer stint as an outside adviser to the bureau on its National Advisory Committee on Racial, Ethnic and Other Populations.