Accessibility links
Funeral For Hank Aaron: The 'Marvel From Mobile' Is Honored In Atlanta Even before Hank Aaron set foot on the field or got a hit in Atlanta, said former Mayor Andrew Young, he "changed this city" for the better.

Funeral For Hank Aaron: The 'Marvel From Mobile' Is Honored In Atlanta

Funeral For Hank Aaron: The 'Marvel From Mobile' Is Honored In Atlanta 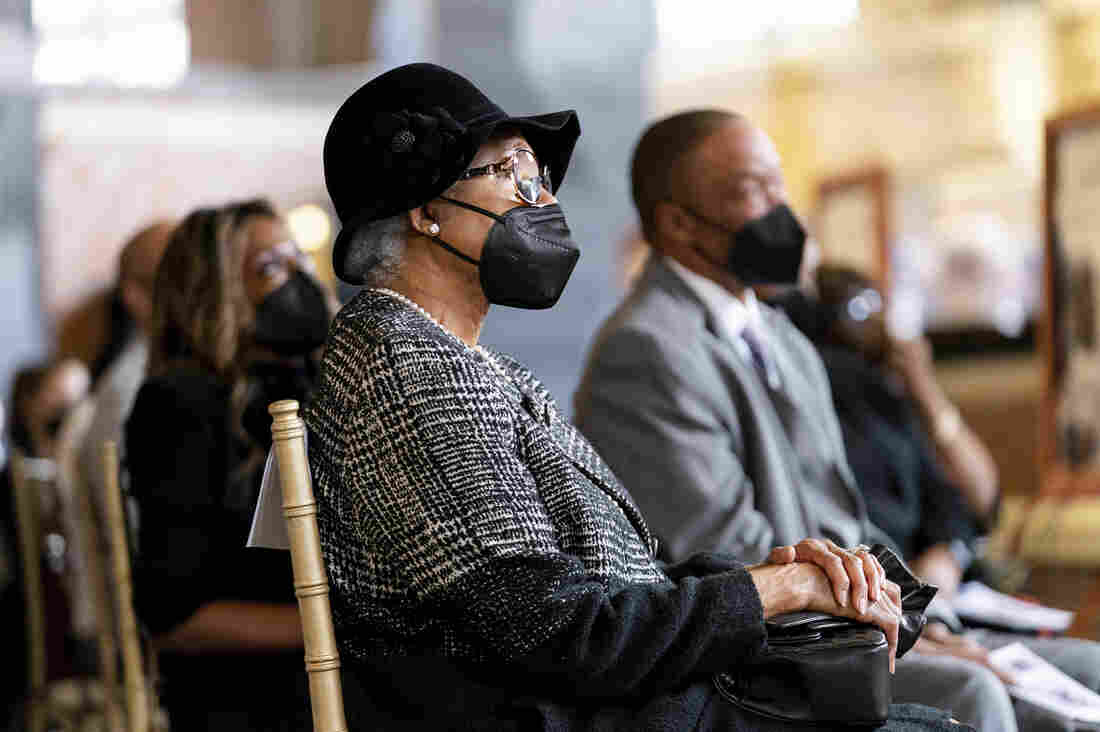 Billye Aaron listens during "A Celebration of Henry Louis Aaron," a memorial service celebrating the life and enduring legacy of the late Hall of Famer and American icon at Truist Park in Atlanta. Kevin D. Liles/Atlanta Braves via AP hide caption 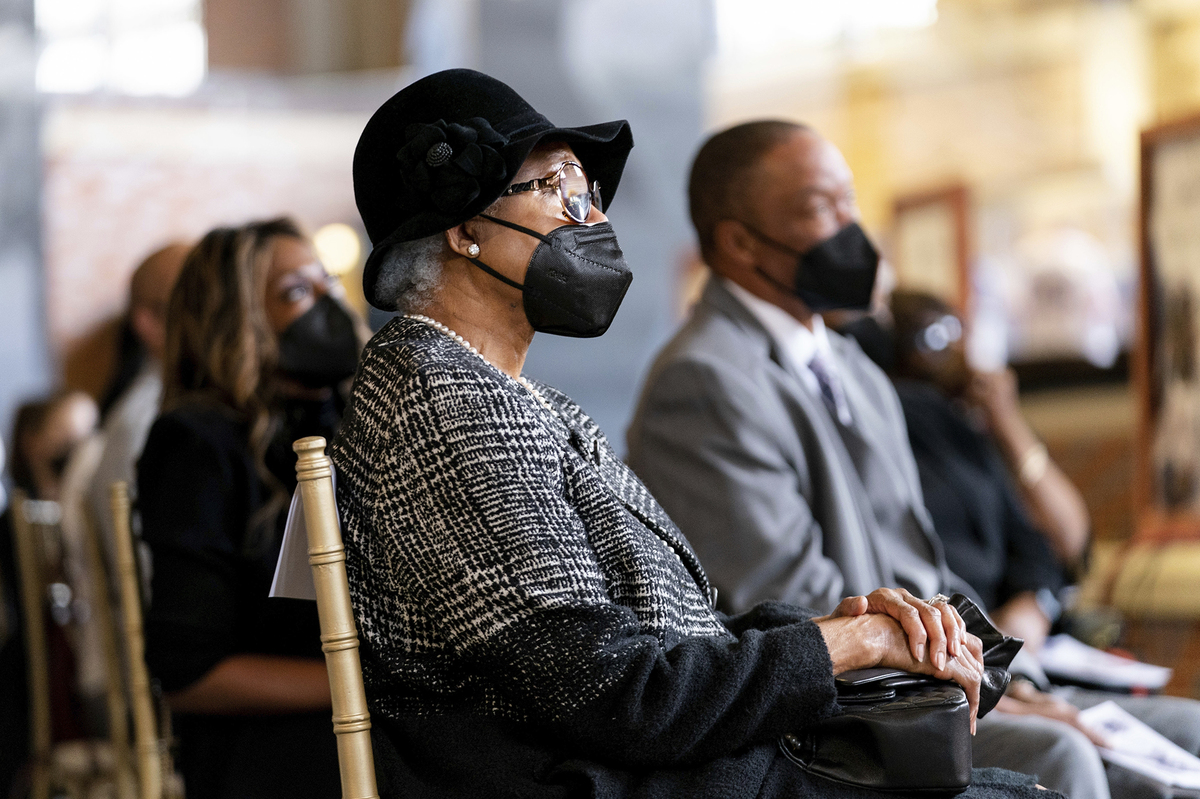 Billye Aaron listens during "A Celebration of Henry Louis Aaron," a memorial service celebrating the life and enduring legacy of the late Hall of Famer and American icon at Truist Park in Atlanta.

Hank Aaron, a hero of baseball and of civil rights, is being buried in Atlanta Wednesday, drawing friends, family and sports luminaries to say farewell to the widely respected slugger and activist.

Aaron died last week at age 86, setting off a flood of tributes from fans and admirers. He was born into poverty and achieved greatness, starting his career in the Negro Leagues and finishing it in the Hall of Fame. He remains at the top of Major League Baseball's record books in two key categories: runs batted in and total bases.

Aaron's achievements were due to rare skills and strength, Clinton said, and he worked hard to nurture his abilities and to be consistent over the three decades of his decorated career.

"You have to train your grace," Clinton said.

Carter noted that he and Aaron learned how to ski together during family trips to Colorado.

"We've lost a good friend and a great athlete," the former president said in his brief remarks, extending his condolences to Aaron's family.

Andrew Young, former U.S. ambassador to the U.N. and former Atlanta mayor, credited Aaron with changing the city — for good, and forever. He recalled the afternoon that the Braves franchise moved to Atlanta from Milwaukee.

"I was standing in front of the American Hotel with a bunch of country boys who happened not to be my color," Young said. "And when he came by sitting on the back of this convertible, they mumble to each other, 'You know, that fella's gonna have to be able to buy a home anywhere he wants to in this town.'

"Just his presence" brought that shift, Young said, noting that even before Aaron set foot on the field or got a hit, he "changed this city."

The funeral service began at 1 p.m. ET at Friendship Baptist. The Braves, the team Aaron played for when he broke Babe Ruth's longstanding home run record in 1974, also held a memorial service on Tuesday. And for days now, Braves fans have been visiting Aaron's statue inside of Monument Garden at Truist Park. 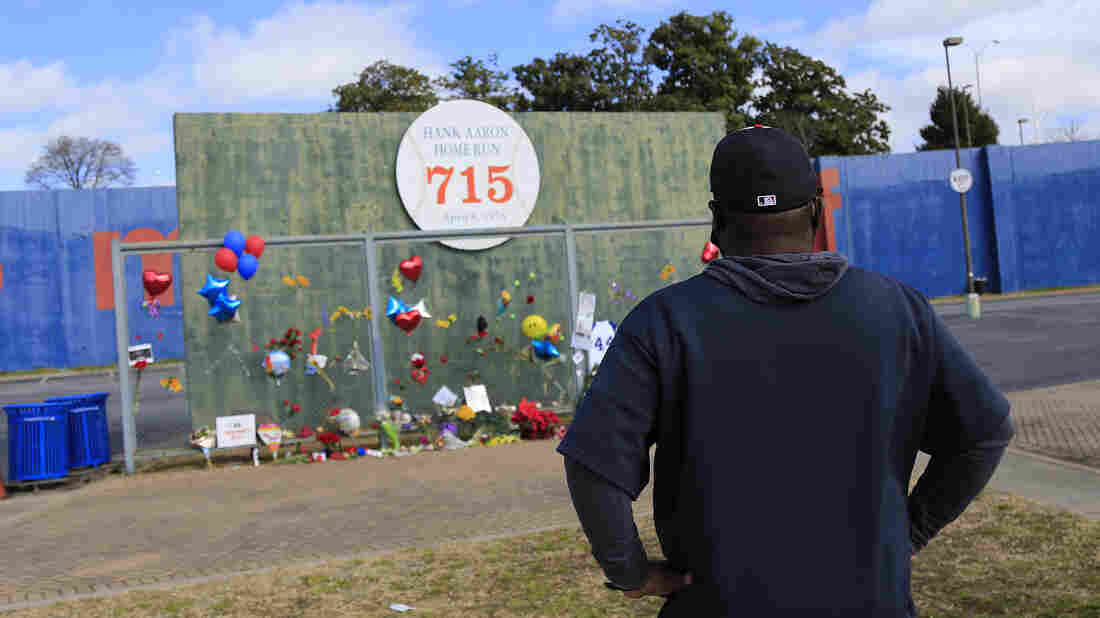 Fans pay their respects to Hank Aaron at the 715 Wall — site of Aaron's historic home run on the former grounds of Fulton County Stadium, the previous home of the Atlanta Braves. David John Griffin/Icon Sportswire via Getty Images hide caption 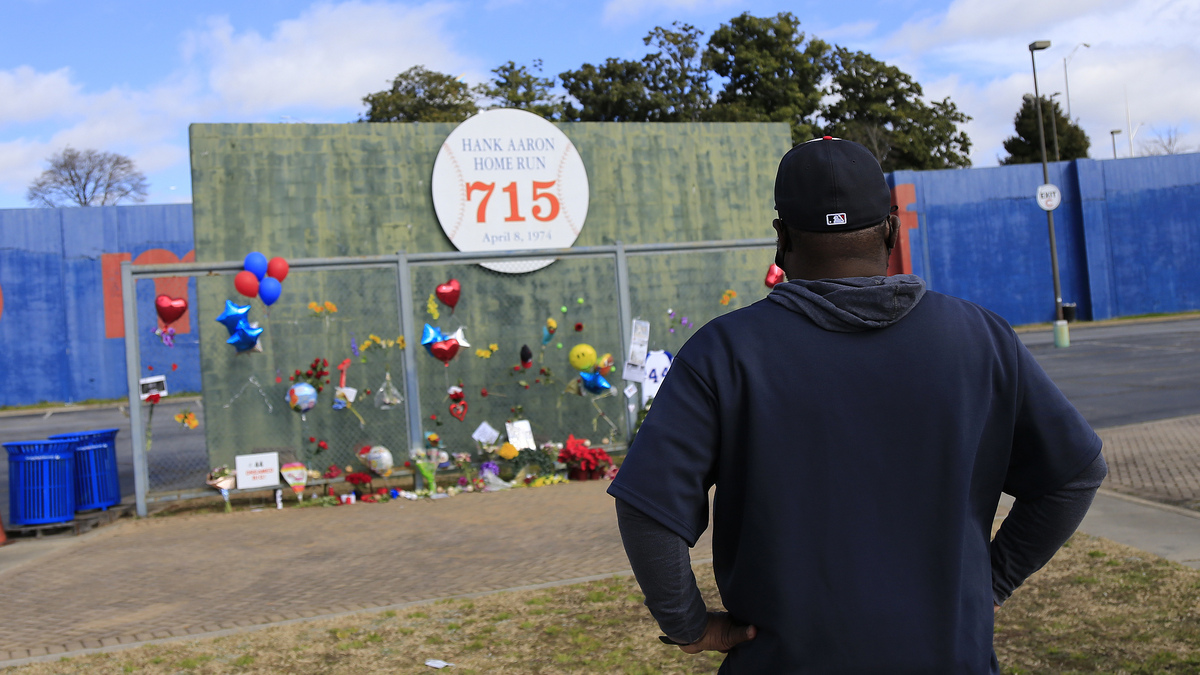 Fans pay their respects to Hank Aaron at the 715 Wall — site of Aaron's historic home run on the former grounds of Fulton County Stadium, the previous home of the Atlanta Braves.

Many of the tributes to Aaron touched on his achievements in baseball and how he became one of the greatest sportsmen in U.S. history even as he was harangued and threatened by racists. And fans praised him for setting an example, first by pursuing excellence and then by using his success and wealth to help others and push for racial equality.

Civil rights leader Otis Moss Jr., a friend of Aaron's and pastor emeritus of Olivet Institutional Baptist Church, thanked the Lord for Henry Hank Aaron – and for "giving him all that he needed to face the dangerous toils and indescribable opposition. And in all of these brutal circumstances, he grew better and better, and greater."

Selig recalled his decades-long friendship with Aaron, from the 1950s in Milwaukee to their later years as statesmen of the sport. And he highlighted the backlash Aaron faced when he challenged Ruth's record.

"The imagery of a black man being given a standing ovation in the Deep South was a powerful civil rights moment, one for which there was a heavy price to be paid," Selig said. "As you all know, Henry had received horrific hate mail and death threats."

Aaron famously held on to some of those hateful letters, and in the years that followed, he showed them to his friend.

"The letters were shocking and to me demonstrated how only a person with his great inner strength and determination could overcome" that amount of vitriol, Selig said.

Another quote centered on Aaron's philanthropy. Hank and Billye Aaron have given millions of dollars in grants and scholarships to help young people pursue their passions through education.

"I just feel like nothing that we have belongs to us," Aaron's grandson said, reading his grandfather's words. "It was given to us by God, and when we leave here, I don't know of anybody who will go with a casket full of money. So why not let somebody else enjoy what we have been fortunate enough to accumulate?"

After his playing days, Aaron was an executive with the Braves. He also owned a restaurant group and several car dealerships — a venture in which, like baseball, he challenged the status quo.

Thomas Moorehead, former CEO and president of Sterling Motorcars, said that in the late 1990s, Aaron opened his BMW dealership in Georgia just 30 days before Moorehead opened his own dealership.

"Henry, Ed Fitzpatrick and I were the first luxury BMW dealers of color in America," Moorehead said. "He was motivated by the fact that he wanted the industry to change its complexion."

The group made a pact, with Aaron stating, "I want us to have general managers in our store that look like us."

Moorehead recalled the day Aaron told him, "I have a young lady from Mobile, Alabama, that will be the first technician in my store."

"That was what he was most proud of," Moorehead said.

Praising Aaron for his character, his resolve and his courage, Costas called him " a genuinely great man and a great American." And the broadcaster recalled that when Aaron was a teenager, he had missed school so he could see Jackie Robinson speak in Mobile.

"Jackie Robinson famously said a life is not important except in the impact it has on other lives. More than 70 years ago, Jackie Robinson had no way of knowing the impact he would have on a kid who skipped school to hear him speak and climbed a tree to see him play.

"No way to know that that kid would go on to become, in many respects, the most significant baseball player since Jackie Robinson himself, that that kid would take the baton from his idol and inspiration and carry it so well, so honorably and for so long.

"And now that glorious race has been fully run. Rest in peace, Mr. Aaron."

In Atlanta, a number of sports teams have announced plans to retire Aaron's famous number 44, including the Atlanta Falcons, Atlanta United and Georgia Tech.