Accessibility links
Cicely Tyson, Actress With Grace And Gravitas, Has Died At 96 In a career that spanned more than six decades, she commanded attention on the screen and the stage and was known for roles that reflected her experience as an African American woman. 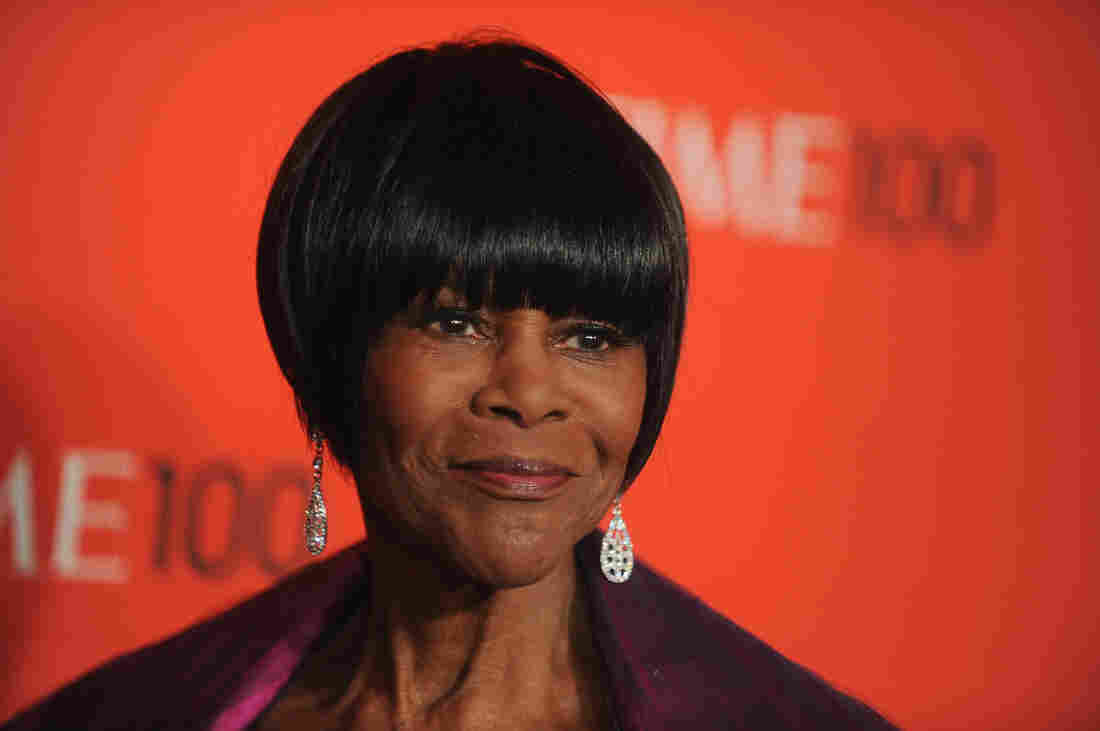 Cicely Tyson attends the TIME 100 Gala in 2012. The famed actress died at the age of 96. Tyson inspired generations of African American actors who grew up watching her perform on stage and on screen. Fernando Leon/Getty Images for TIME hide caption 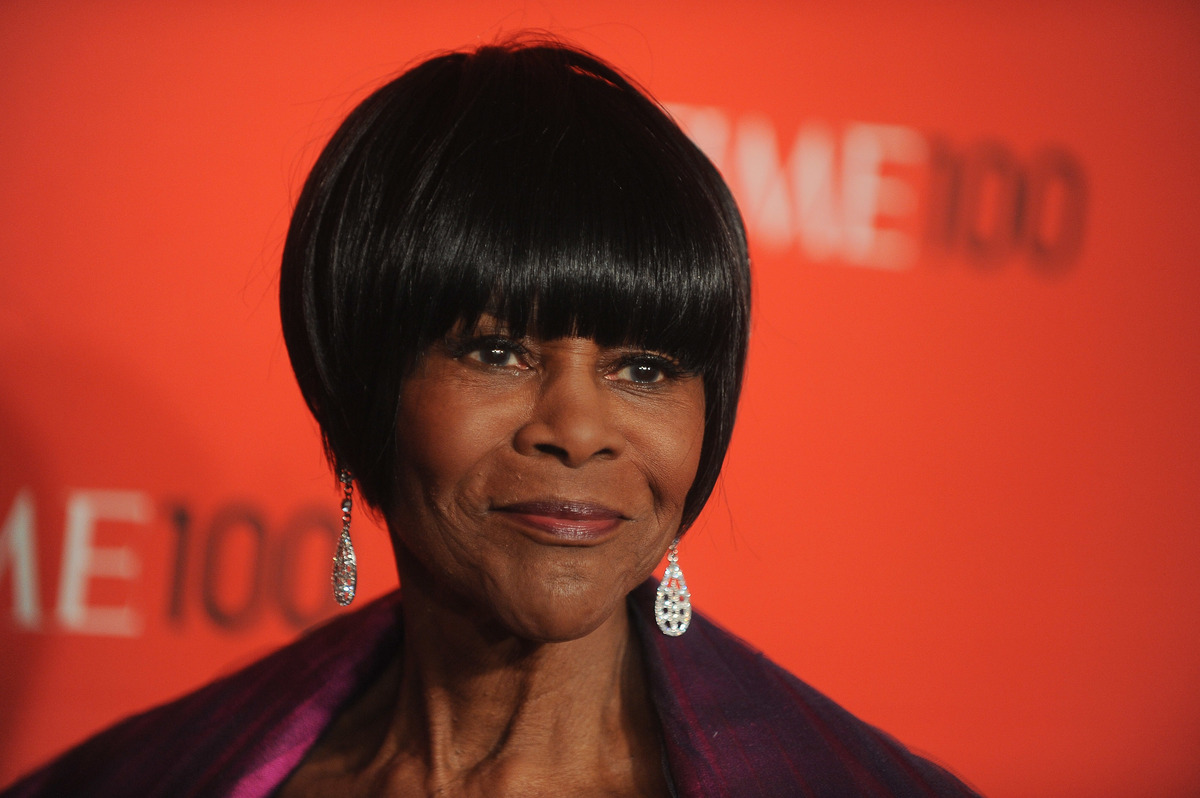 Cicely Tyson attends the TIME 100 Gala in 2012. The famed actress died at the age of 96. Tyson inspired generations of African American actors who grew up watching her perform on stage and on screen.

Renowned actress Cicely Tyson has died; she was 96 years old. Her death was announced by Larry Thompson, her longtime manager, who did not specify the cause.

In a career that spanned some 65 years, Tyson was an elegant, dignified presence on stage and screen. She commanded attention in such movies as Sounder and The Autobiography of Miss Jane Pittman. She won Emmys and, at age 88, a Tony Award. She also inspired generations of African American actors who grew up watching her.

In an interview that aired just last Sunday marking the publication of her memoir Just As I Am, Tyson told NPR's Michel Martin that as an actress, "I learned that I could speak through other people. I was a very shy child. I was an observer. ... I never spoke ... but I was a great observer."

'Just As I Am': Cicely Tyson Reflects On Her Long Career

Cicely Tyson brought grace and gravitas to the roles she played. It was her eyes that spoke. They could sparkle in one scene and then pierce the soul in another. That is, she had range.

In Sounder, she was a wife and mother in a family of Black sharecroppers in Louisiana in the 1930s. The part called for Tyson to be tender with her family and to seethe when the town's white sheriff won't let her see her husband in jail. Critic Roger Ebert wrote that it was a "wonder to see the subtleties in her performance."

In 1972, Sounder was one of the first movies to show the strong bonds of a loving Black family. Tyson once told NPR that it was also the movie that made her realize she needed to look for roles that reflected her experience as an African American woman. 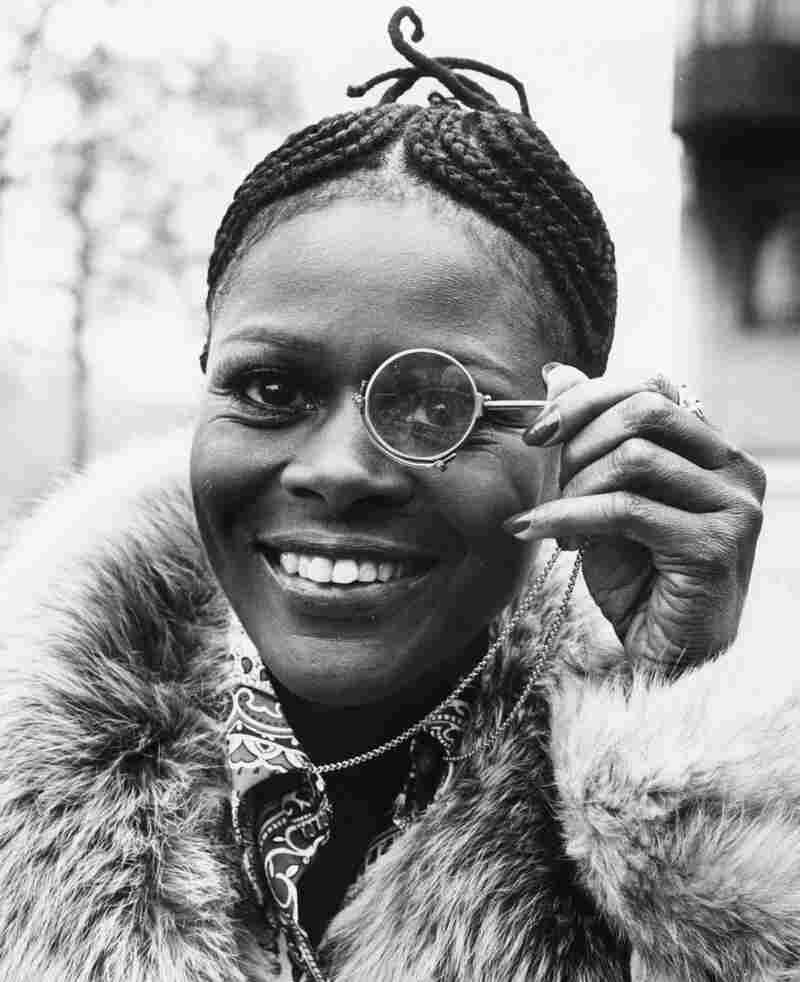 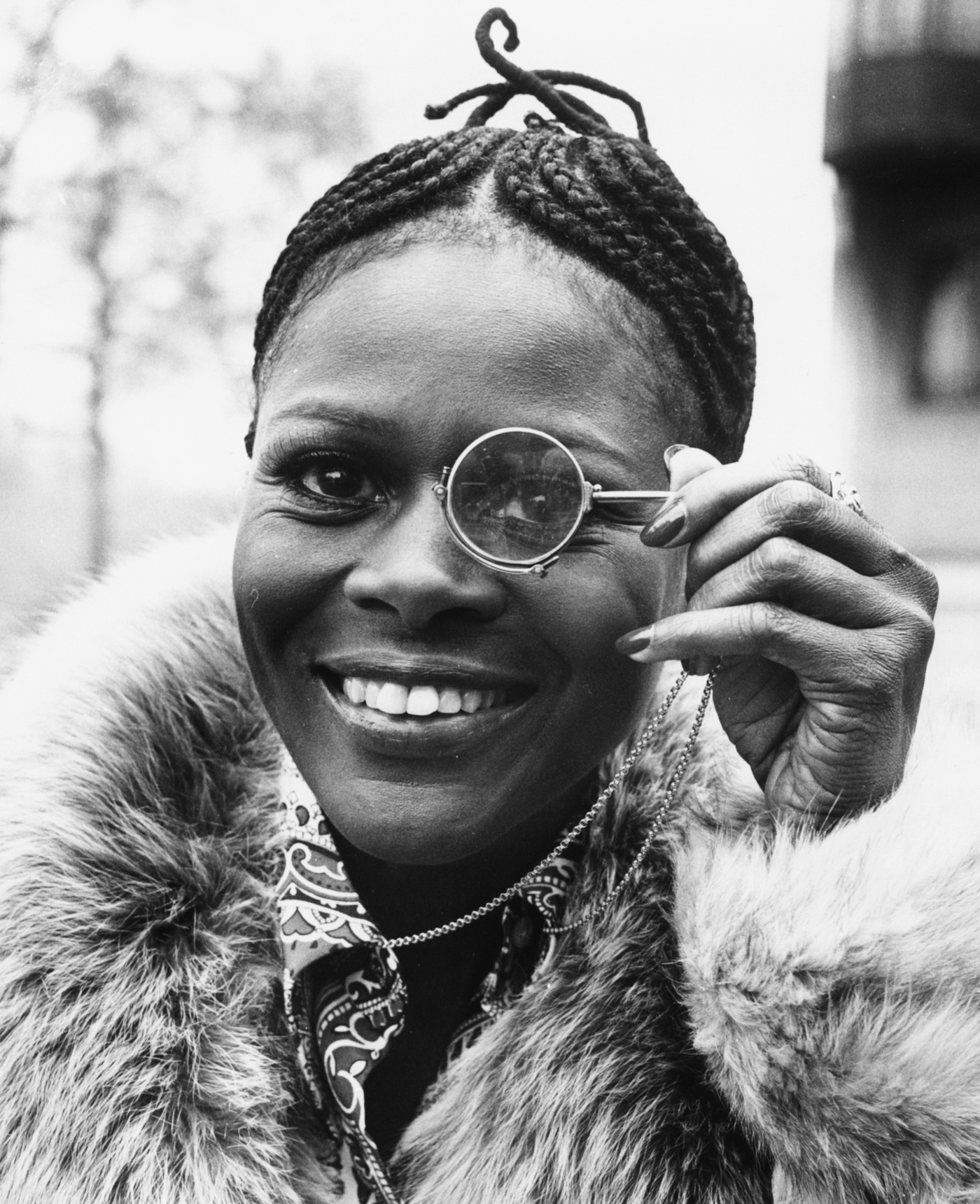 During a press conference for Sounder, a white journalist told her the movie made him aware of his own prejudice because, he said, he was surprised to hear African American children call their father "Daddy," just like his kids called him.

"He could not equate the fact that this man was on the same level as he," Tyson said. "And really, I admired him for standing up in an audience and saying that, and I thought to myself, 'Cicely, you really can't afford the luxury of just being an actress.'"

Cicely Tyson was born in Harlem. Her parents were from the Caribbean. Her father was a carpenter and a painter; her mother was a housekeeper who was deeply religious. In 2005, Tyson told NPR that their lives revolved around the church.

Tyson was also gorgeous. She started modeling after high school. Soon, she was acting in movies and on TV. It was the 1960s – during the civil rights movement. New York was a place where Black artists formed alliances. Tyson performed in shows with all-Black casts, alongside artists such as her friends Maya Angelou and James Earl Jones.

One of Tyson's first roles was in the socially conscious but short-lived TV series East Side/West Side. Tyson played a poised, intelligent secretary in an office of social workers. 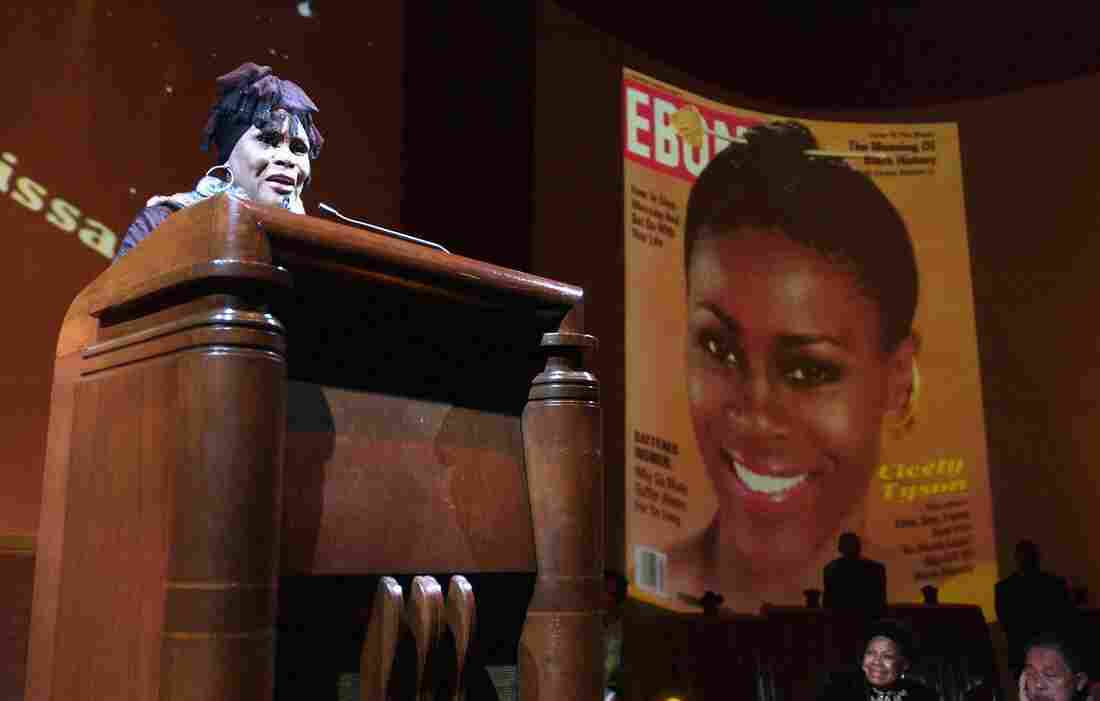 In 2006, Cicely Tyson was honored and spoke at an Ebony magazine event ahead of the Academy Awards. Her face graced the cover of the magazine several times. Amanda Edwards/Getty Images hide caption 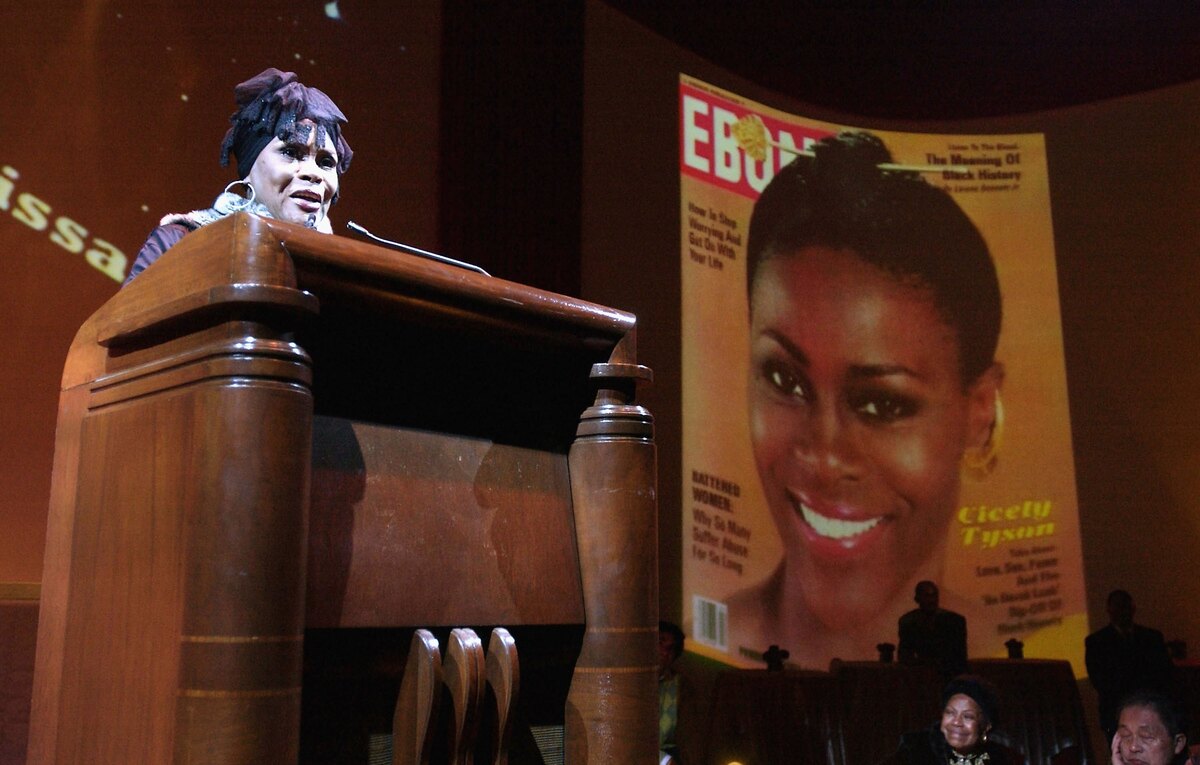 In 2006, Cicely Tyson was honored and spoke at an Ebony magazine event ahead of the Academy Awards. Her face graced the cover of the magazine several times.

Cicely Tyson always looked for positive portrayals of Black women. In 1974, she took on one of her most famous characters — the lead in The Autobiography of Miss Jane Pittman, a TV movie on CBS.

With the help of a stunning makeup job, Tyson transformed herself to play the title role, a former slave and sharecropper. Tyson played Miss Pittman at various stages in her life. As a young adult, she's beaten up by Klansmen. Friends and family members are murdered. Tyson captured her weariness — as well as her resilience.

It was a rare event for a television network to broadcast a feature film about the brutal struggles of African Americans in prime time, especially from the point of view of African Americans. The Autobiography of Miss Jane Pittman won nine Emmys, including one for Tyson.

It was a performance that deeply inspired a young Viola Davis. She and her sisters watched the TV movie together in their family's rundown apartment in South Carolina. At an awards press conference in 2015, Davis said Tyson was a revelation.

"She was the first actress that I saw when I was 6, 7 years old that — where I saw craft," Davis said. "Where I saw the magic of transformation."

Viola Davis eventually got to share in that magic. In the TV series How to Get Away with Murder, Tyson played Davis' mother.

Cicely Tyson used to say, well into her 80s, that she was still looking for one more great role to play. At age 88, she found it: playing Mrs. Carrie Watts in a Broadway revival of Horton Foote's The Trip to Bountiful, with an all-Black cast.

In one scene at the bus station, Tyson's character strikes up a conversation with another solo traveler. She would break into a hymn. Overcome with emotion, she would get up off the bench and start clapping. Sometimes the audience would join in.

She was once asked, what was her secret for being so active into her 90s. Tyson said she took care of her body — but also that she simply loved life.

An earlier web version of this story incorrectly stated that Cicely Tyson won a Tony Award at 89. She was 88.