Accessibility links
Amazon Union In Alabama Would Shake Up History If workers from Amazon's warehouse near Birmingham vote to unionize in the next two months, they would turn a new page not only for the company but for the region. 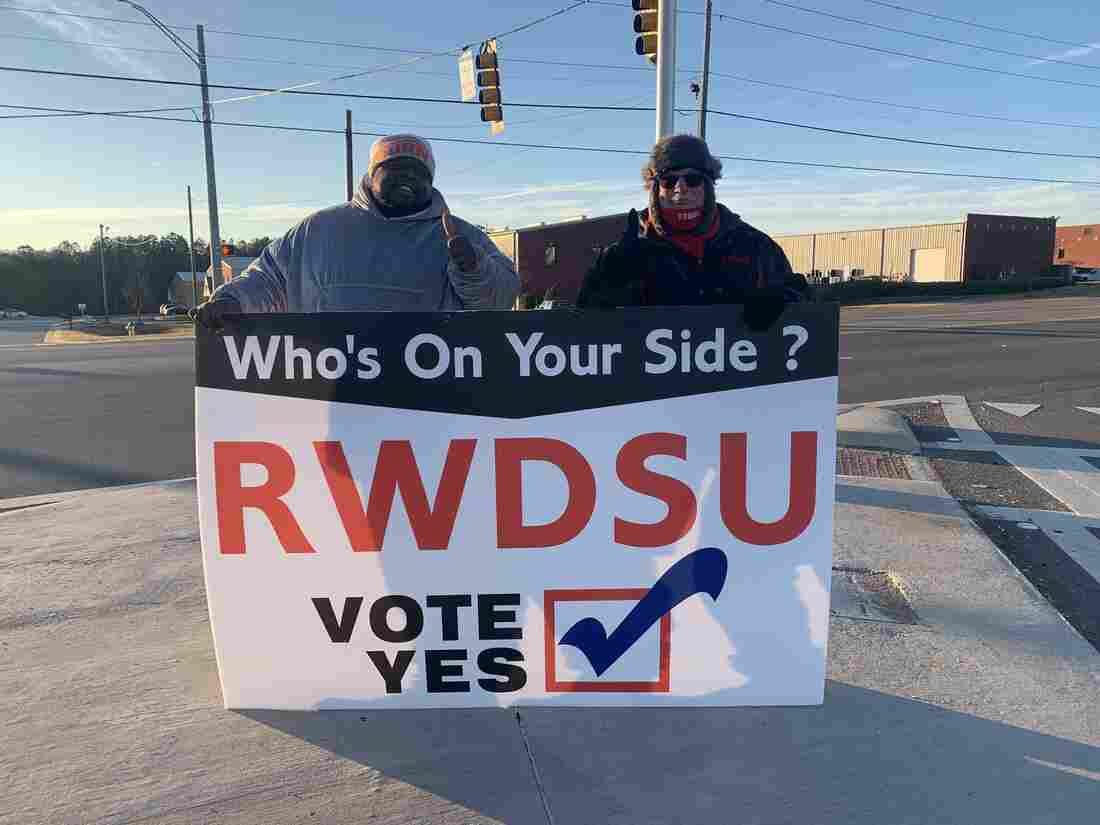 Representatives from the Retail, Wholesale and Department Store Union hold a pro-unionization sign outside Amazon's warehouse in Bessemer, Ala. Miranda Fulmore/WBHM hide caption 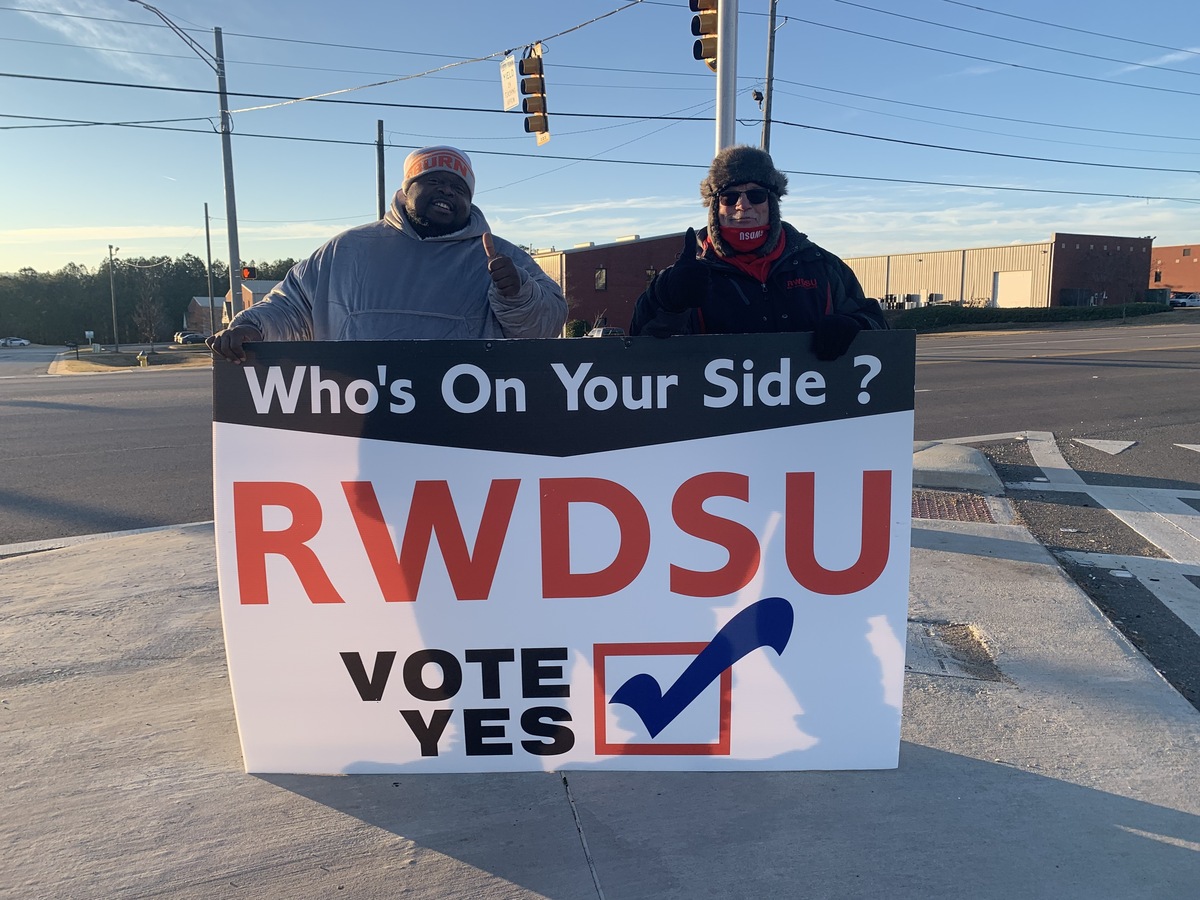 Representatives from the Retail, Wholesale and Department Store Union hold a pro-unionization sign outside Amazon's warehouse in Bessemer, Ala.

Even before Amazon built its warehouse in Bessemer, Ala., local officials called it a game-changer.

The mayor said it was the largest single investment in the 130-year history of the city. Birmingham's working-class suburb is a shadow of the steel and mining hub it used to be. Amazon jobs, paying more than double the state's minimum wage of $7.25, promised a shot in the arm.

But less than a year after the facility opened, it became a different kind of game-changer: Amazon's first U.S. warehouse to get to a union election. If the union drive wins, it would turn a new page not only for the company, but also the region.

Some 5,800 workers of the Bessemer warehouse will begin voting by mail on Feb. 8 on whether to join the Retail, Wholesale and Department Store Union. This will be the first Amazon warehouse union election since 2014, when a small group of technicians in Delaware voted against unionizing.

Bessemer workers reached out to the retail union quietly during the pandemic-rattled summer, according to RWDSU President Stuart Appelbaum. The workers described grueling productivity quotas and wanted more say in how people at Amazon work, get disciplined or get fired.

A support system mobilized — help from unionized workers around the region, many from poultry plants. Within months, the union says, more than half of Amazon staff at the Bessemer warehouse signed cards saying they want a union shop.

"The thing that is most important for them is to be treated with respect," Appelbaum told NPR. "I also think that the facility was new and I think people had expectations when they came in that were not being realized."

Amazon representatives say the workers pushing for a union do not represent the majority of its employees' views, adding: "Our employees choose to work at Amazon because we offer some of the best jobs available everywhere we hire." The company is pushing to delay the union election, appealing for an in-person vote rather than by mail, despite coronavirus concerns.

"It's going to make a ripple"

Down the interstate from Bessemer, Jim Spitzley has followed the Amazon vote with special interest. He works at a Mercedes-Benz plant — the epicenter of the last high-profile labor battle in Alabama.

"It's going to be a big, big deal when (the Amazon election) happens," he says. "That's what it all comes down to, getting that vote ... and we haven't got that in 25 years on three attempts."

Spitzley and his coworkers came close in the 2010s, when the United Auto Workers union tried to make inroads at foreign auto plants moving to the American south. In Spitzley's eyes, the companies flocked to the region because it's known for anti-union sentiments, seeing people like him as "country bumpkins," he says, who don't know or care about unions.

Alabama and many states around it have right-to-work laws, which mean every worker can choose not to pay union dues. Over time, workers at several auto plants in the region voted against unionizing, including at Volkswagen in Tennessee where VW did not fight the union but the governor and lawmakers did.

"The billboard that I'll never forget: "Do you want Tuscaloosa to be the next Detroit?'" says Michael Innis-Jiménez, American studies professor at the University of Alabama. "Let's throw race in there, too, obviously, but, you know, seeing this post-industrial city in a lot of pain and blaming that on the unions and outsiders."

Google Workers Speak Out About Why They Formed A Union: 'To Protect Ourselves'

Spitzley's plant in Alabama never got a union election. He's now the president of a local outpost of UAW, not recognized by Mercedes. He wonders if an Amazon union might shake things up.

Of all the southern states, Innis-Jiménez points out, Alabama actually has the highest percentage of unionized workers. And Bessemer specifically has union history. The city is predominantly Black, and the Amazon union campaign is evoking social and racial justice themes.

"We see this as both a labor struggle and as a civil rights struggle, which has often been the story of the labor movement in the South," Appelbaum says. "We have a proud tradition of being involved in the civil rights movement and we see the effort at Amazon, at this warehouse as being a continuation of that."