Accessibility links
U.S. Economy Slows Sharply As Pandemic Resurges The Commerce Department says the U.S. economy grew just 1% in the last three months of the year, as a rise in coronavirus infections weighed on in-person businesses like restaurants. 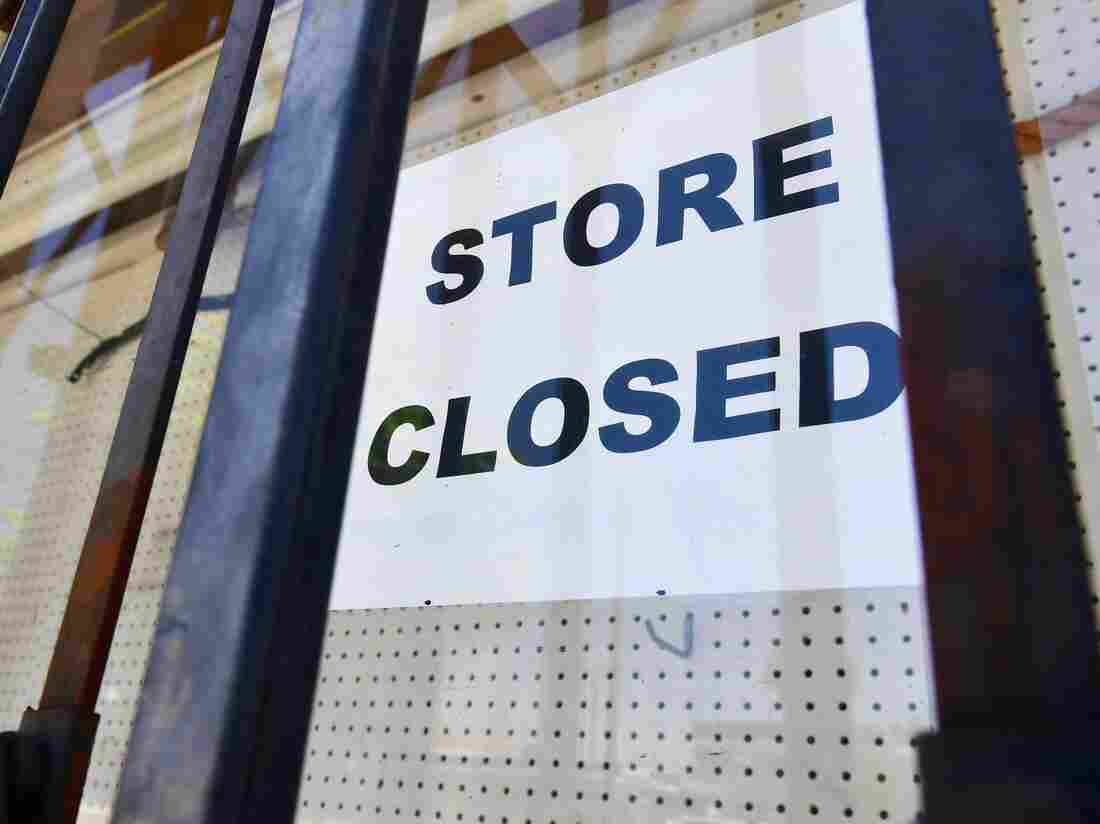 The U.S. economy slowed sharply in the last three months of the year from the previous quarter as the pandemic made a resurgence and businesses had to close. Frederic J. Brown/AFP via Getty Images hide caption 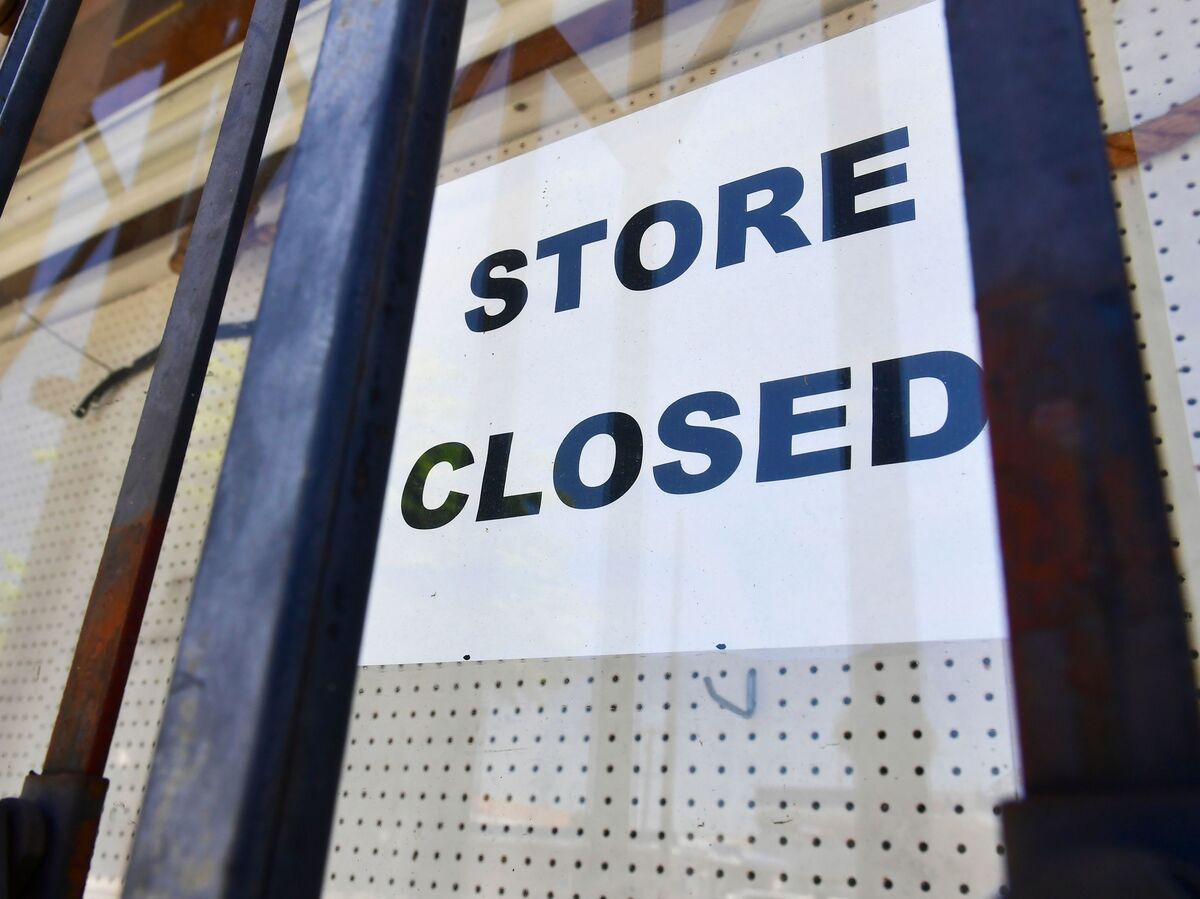 The U.S. economy slowed sharply in the last three months of the year from the previous quarter as the pandemic made a resurgence and businesses had to close.

The nation's economic engine slowed considerably in recent months, as it faced off against a winter wave of coronavirus infections.

The Commerce Department reported Thursday that the nation's gross domestic product grew just under 1% in October, November and December — a marked downshift from the three previous months. On an annualized basis, the economy grew 4% in the fourth quarter.

GDP was 2.5% smaller at the end of the year than when it began. Economic activity plunged last March and April when the pandemic took hold. The economy staged a partial comeback in the summer and early fall, only to falter in the last three months of the year.

Forecasters expect to see stronger economic growth this year, if the new vaccination campaign is successful in getting control of the pandemic.

The Federal Reserve highlighted the pandemic's drag on economic activity in a statement Wednesday, while renewing the agency's promise to leave interest rates near zero for an extended period.

"We're a long way from a full recovery," Powell said.

Key sectors such as leisure and hospitality have been hit hard by the pandemic's winter surge. Ben Herzon, a senior economist with IHS Markit, said were it not for the $900 billion rescue package that Congress passed in the final weeks of December, the economy might have started 2021 with a double-dip recession.

The 1% growth rate in the fourth quarter is a significant slowdown from the previous three months, when GDP grew nearly 7.5%. That followed a steep drop of nearly 9% in the second quarter.

(The Commerce Department typically reports quarterly GDP changes at annualized rates, which exaggerates swings, both up and down. Measured on an annualized basis, third-quarter GDP grew 33.4% after a drastic 31.4% contraction in the second quarter.)

"We got a really strong third quarter, and then things started to fizzle out a little bit," Herzon said.

Hurt most in the last three months of the year were restaurants and in-person entertainment businesses such as movie theaters, as a winter wave of coronavirus infections and deaths made consumers nervous about going out. The leisure and hospitality segment of the economy lost nearly 500,000 jobs in December.

Other segments of the economy have fared better. Manufacturing and homebuilding continue to bounce back from their pandemic slump, and consumption of goods is higher now than it was before the coronavirus struck.

"There are some strengths," Herzon said. "It's just that services, which is a very large part of the economy, is really struggling to get back to where it was."

With COVID-19 still killing around 4,000 Americans every day, economic activity is likely to remain subdued for the next several months. But if new vaccines are successful in stopping the pandemic, the economy is poised for a strong recovery in the second half of this year.

"The economy remains in a delicate spot," said Jim Baird, chief investment officer for Plante Moran Financial Advisors. "The good news is that the light at the end of the tunnel is approaching, as vaccine distribution accelerates and we move closer to herd immunity."

The International Monetary Fund expects the U.S. economy to grow 5.1% in 2021 and match its pre-pandemic level sometime in the second half of the year.

Any forecast, however, comes with a number of question marks: How smoothly will the vaccine rollout go? What is the impact of new coronavirus variants? And how much more money will consumers spend once the pandemic is under control?

Americans who have kept working during the pandemic have socked away about $1.3 trillion in extra savings during the past year, according to Pantheon Macroeconomics. That could provide a significant boost to the economy, if and when they decide to spend it.

"You probably won't get more haircuts than you otherwise would have," Herzon said. "But maybe people are really tired of staying home, and they will go out to eat more than they would have otherwise."

Additional fuel could come from the federal government if Congress approves another round of $1,400 relief checks, or other parts of President Biden's proposed $1.9 trillion package to rescue the economy.

A surge in demand for airline tickets and restaurant reservations that suddenly outstrips supply could trigger a jump in prices. But the Federal Reserve is not overly concerned that short-term price hikes will lead to runaway inflation.

"We're going to be patient," Powell said. "Expect us to wait and see and not react if we see small and what we would view as very likely to be transient effects on inflation."