Accessibility links
Registered Republicans Ditch Party After Capitol Riot About 4,600 Republicans changed their party status in Colorado in the immediate aftermath of the Capitol riot. Other states are reporting similar defections from the GOP. 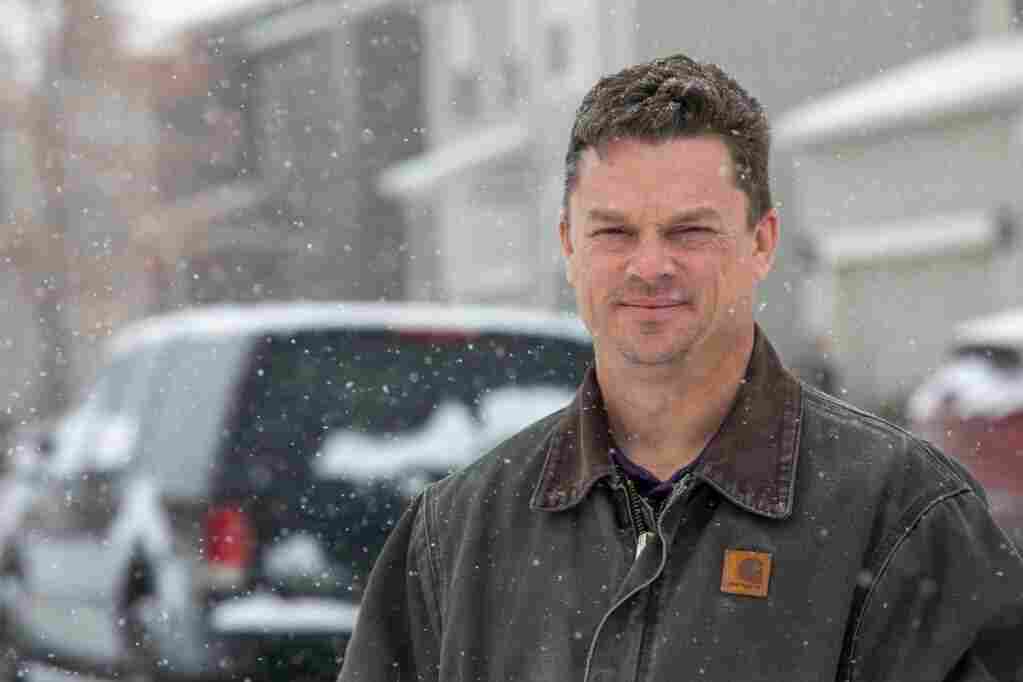 "I was completely shocked and ashamed. That's not how I think of the Republicans — who we were, and who we are," said Lyle Darrah of the riot at the Capitol. Darrah recently changed his party registration from Republican to Democrat. Hart Van Denburg/CPR News hide caption 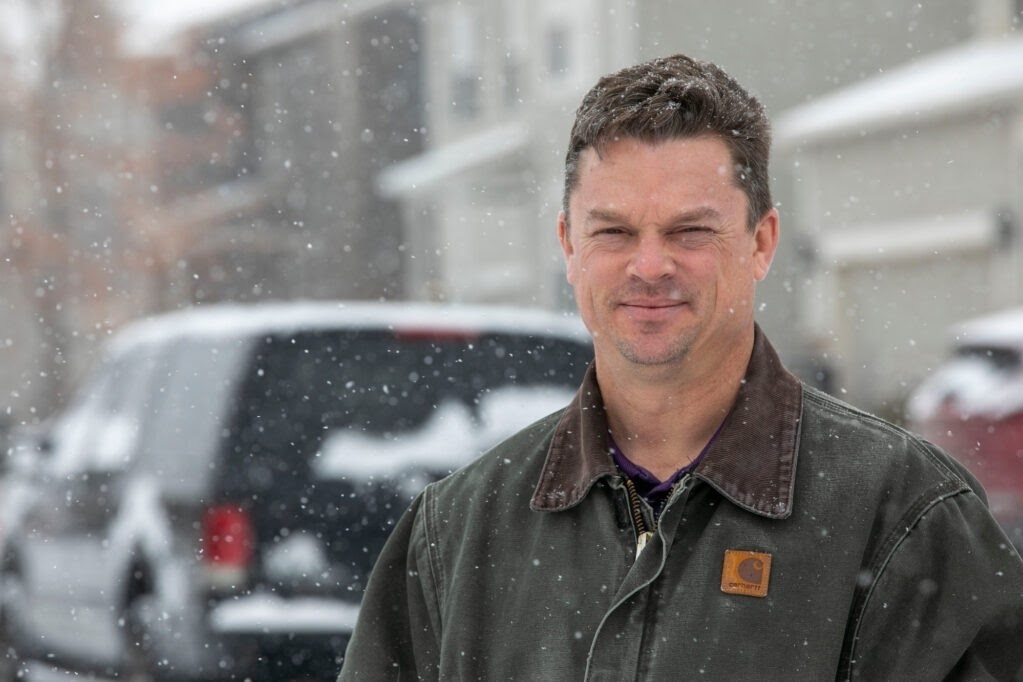 "I was completely shocked and ashamed. That's not how I think of the Republicans — who we were, and who we are," said Lyle Darrah of the riot at the Capitol. Darrah recently changed his party registration from Republican to Democrat.

Lyle Darrah was on a conference call at work in rural Weld County, north of Denver, when the riot at the U.S. Capitol started on Jan. 6. When his boss mentioned what was happening, he turned on news coverage — and immediately felt his last allegiance to the Republican Party slipping away.

"I was completely shocked and ashamed. That's not how I think of the Republicans — who we were, and who we are," he said. "It's something I felt I could no longer be in support of."

That night, he talked with his wife over dinner at their home. Darrah had been a lifelong Republican, while his spouse and children are Democrats — the kind of family that joked about canceling out each other's votes.

Later, Darrah, age 49, sat in his living room and pulled up the state's voter registration website. And then, like thousands of other Coloradans in the wake of the insurrection, he left the Republican Party.

"I think it should be a signal," said Darrah, a software company director who voted for Donald Trump in 2016 and Joe Biden in 2020.

His strongest political priorities are fiscal restraint and national defense, he said.

"I don't know if there's anything to be said about being party loyal your entire life, if your party doesn't go in the direction you want it to," Darrah added.

But in this moment of upheaval, his story is just one of many reasons that voters have abandoned the GOP in Colorado, a once-competitive state that swung strongly left in the Trump era.

4,600 fewer Republicans after the riot

In the week from Jan. 6 through Jan. 12, about 4,600 Republicans changed their party status in Colorado, according to a CPR News analysis. There was no comparable effect with any other party. CPR News was able to contact dozens of them by tracking changes in the state's voter file.

The number of people changing parties spiked immediately after the Capitol breach. The same phenomenon is playing out nationwide. News outlets documented about 6,000 defections from the party in North Carolina, 10,000 in Pennsylvania and 5,000 in Arizona.

In Colorado, only a small fraction of the defectors made the same dramatic leap as Darrah did in choosing to join the Democratic Party. Some went to conservative third parties. But the vast majority — about 4,200 people — switched from Republican to unaffiliated status, accelerating a trend that has affected both parties in Colorado in recent years.

"I don't think there would be any other reason why it would begin at that day except that they looked at what was happening in Washington, D.C., and decided this is a time for me to make what is clearly a symbolic move," said Ryan Winger, director of data analysis and campaign strategy for Republican pollster Magellan Strategies. 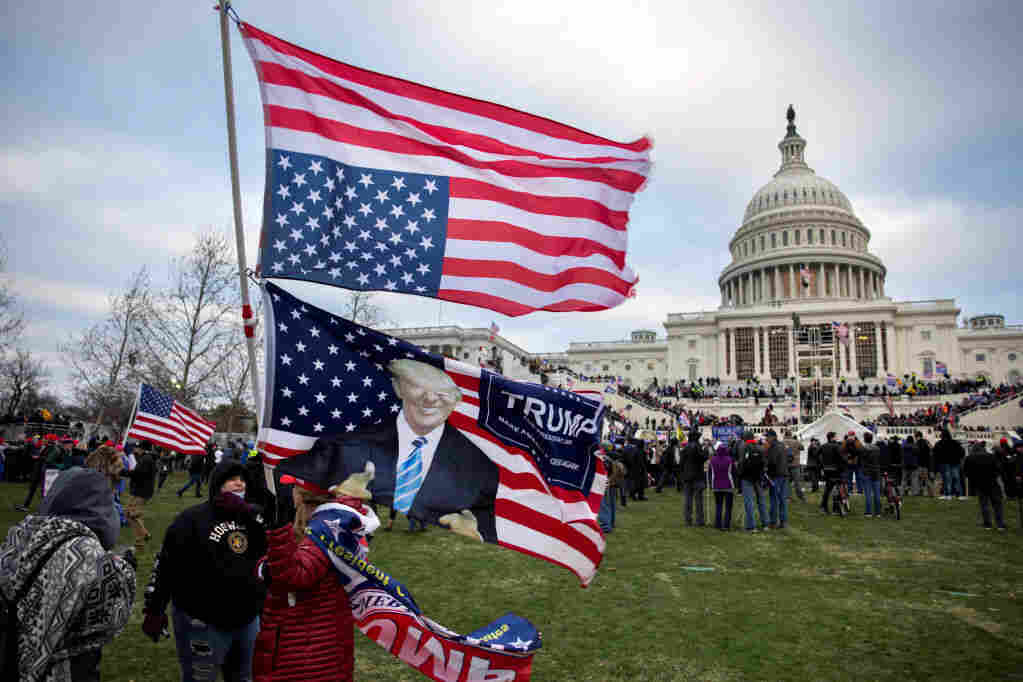 The storming of the Capitol by a pro-Trump mob prompted thousands of Republicans across the country to change their party registrations. Brent Stirton/Getty Images hide caption 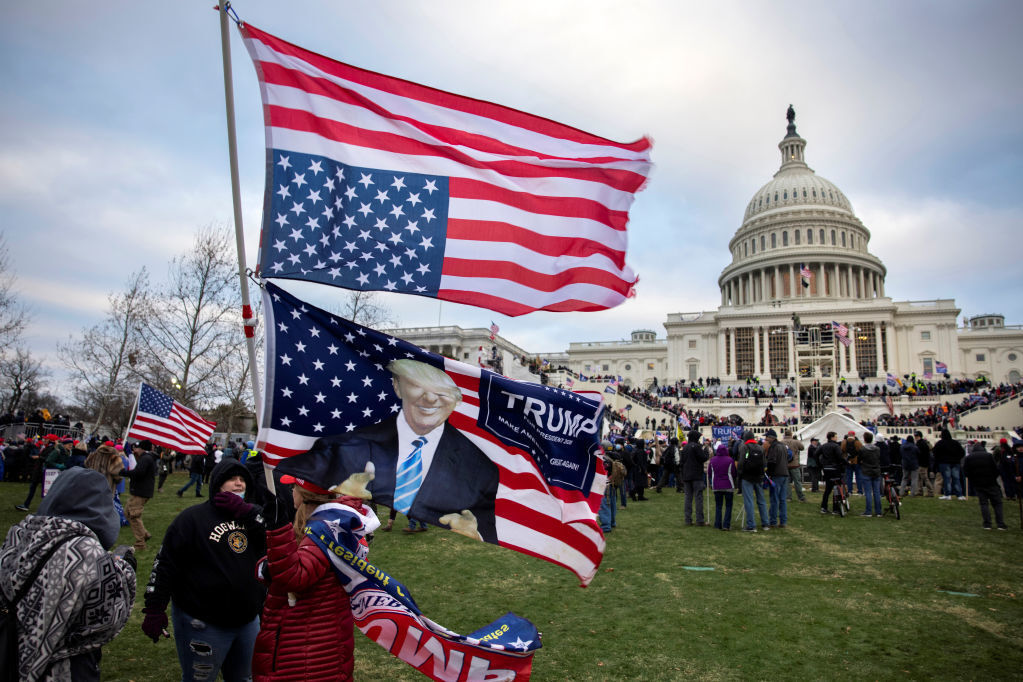 The storming of the Capitol by a pro-Trump mob prompted thousands of Republicans across the country to change their party registrations.

All told, the Colorado GOP lost about a half a percent of its registered voters in the week after the riot.

The thousands of newly unaffiliated voters can still support Republican candidates and participate in the party's primaries. And both parties have seen registered members switch to unaffiliated in large numbers for years.

But interviews and data analysis show how the tumultuous postelection period has created a new split within the Republican Party.

For some right-of-center voters, like Lyle Darrah, the violence at the Capitol was simply the final straw. They described an increasingly strained relationship with the GOP, with some citing the rise of Sarah Palin more than a decade ago as the first sign that the party was focusing on culture wars instead of fiscal conservatism.

"As my husband said, it's just become the party of mean people," said Jo Swanson, 73, a retired school psychologist in Denver. She voted for Hillary Clinton in 2016 but didn't register as a Democrat until this month. She had always considered herself more socially liberal, but her anti-abortion rights beliefs had held her back.

"I really found that hard to let go," she said, adding that she will still fight for abortion restrictions.

Trump supporters are leaving, too

Other newly former Republicans had the opposite reaction: They cut ties with the party because they felt its leaders had abandoned Trump by blaming him for the riot and refusing to overturn the election.

"I quickly realized that I would probably never vote for another Republican again. They have let America down," said Cara Samantha Toney, a 45-year-old mother of three who switched from Republican to Libertarian and lives in Jefferson County, a suburb of Denver.

Phil Trubia, a 52-year-old Mesa County voter, made a similar move to the American Constitution Party. He sees himself continuing to vote for Trump loyalists like Rep. Lauren Boebert, but not for mainstream Republicans.

"I do feel there is a split," Trubia said. "I'm not necessarily doing it to hurt the Republican Party, but the way they turned their backs completely on Trump, that kind of got me really upset." 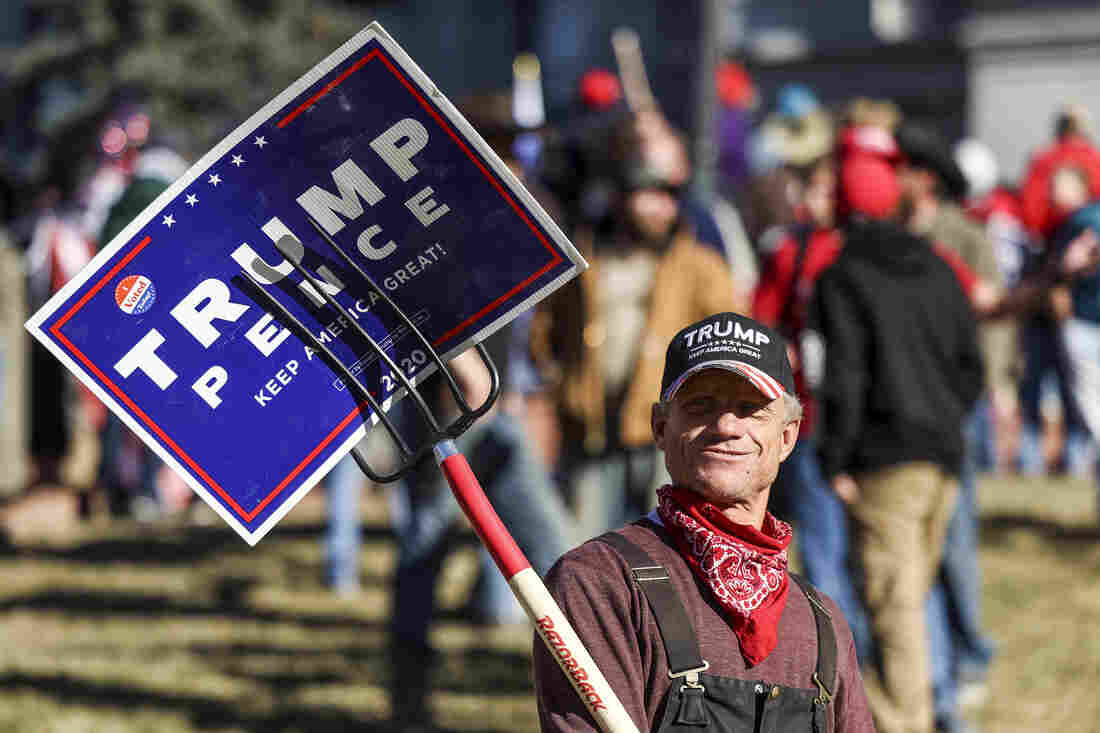 A Trump supporter holds a sign with a pitchfork as he protests the election outside the Colorado State Capitol on Jan. 6 in Denver. Michael Ciaglo/Getty Images hide caption 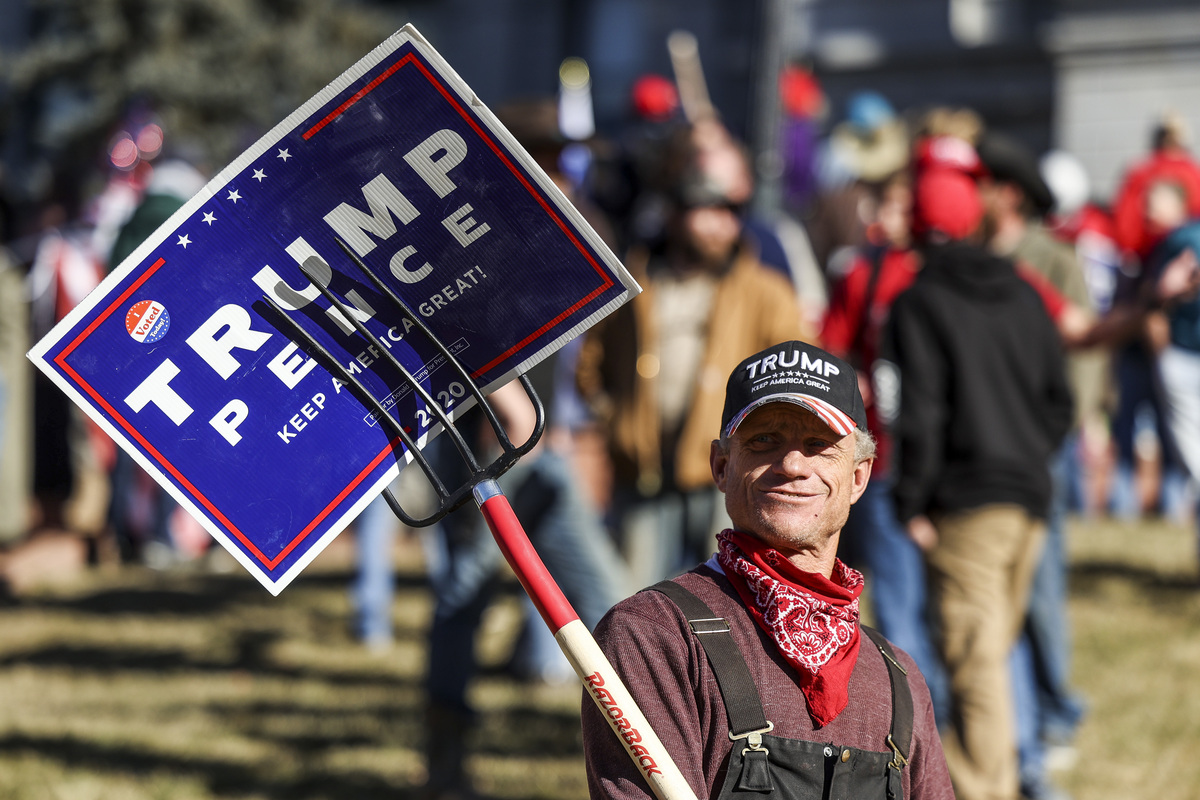 A Trump supporter holds a sign with a pitchfork as he protests the election outside the Colorado State Capitol on Jan. 6 in Denver.

The change was especially pronounced in Colorado's politically competitive counties. In fact, nearly 800 of the switchers were in Douglas County, a Republican stronghold where the party has recently been losing strength — another dangerous signal for the GOP. While Douglas is only the seventh-most-populous county in the state, it had the largest number of voters who left the Republican Party.

"The job after that is going to be to rebuild."

To engage or retreat?

Among the dozens of voters CPR News called for this article, one theme was common: No one knew what would come next for the GOP. Few were optimistic. And some bought into terrifying conspiracy theories about what Democrats would do with their narrow majorities in Congress.

One younger voter moved to unaffiliated because she feared that Republicans could be targeted for abuse. And many have asked themselves whether they should step back from politics altogether.

"Part of me wants to think about all the preppers and people who are battening down the hatches at home and say, 'Well, they're coming to take our guns, take our rights — and be fearful,' " said Karen Trubia, who joined the Constitution Party with her husband, Phil.

In rural Weld County, 44-year-old Sara Ocker switched from Republican to unaffiliated and doesn't expect to vote again anytime soon, because she doesn't believe the elections are run fairly.

"It feels like we're living in the upside-down world," she said. Ocker feels that "RINOs" — Republicans in name only — betrayed the president and wrongly blamed him for the riots. She added that it was impossible that any Trump supporter could have committed violence that day.

"We've all been living a lie and been told a lie," she said.

She hasn't spoken with her parents, who are Biden supporters, since the election. They see her as a QAnon conspiracy theorist, she said, but she thinks of herself as a skeptic who does her own research. Now, she fears a civil war — or, at the least, a generation-long rebuilding of conservative politics.

"A party's got to implode," she said. "I think that's what's happening to the Republican Party, a little bit."

Others are taking a pragmatic approach: Where will they be able to influence politics the most as Colorado stays reliably Democratic?

"I've gotta tell you, the vast majority of my friends are laughing at me, that I switched over to Democrat. They think I'm crazy," said Martin Lee Hussman, 45.

A well-connected resident of Alamosa in the southern part of the state, he was previously a registered Libertarian but voted for Trump last November. As he watched the fallout of the riots, he decided that Democrats would hold power for the foreseeable future.

Hussman figured that being registered as a Democrat would help him moderate the party's candidates by supporting centrist candidates. But Hussman didn't feel very different after changing his party registration.

"Aw, hell," Hussman said. "It's easy to switch back to something else if I don't like the way this one's going."