Accessibility links
What Is Reconciliation? Democrats Face Challenges To Use It For COVID The budget process allows the party in control in Congress to pass most big-dollar legislation without having to worry about a filibuster. But the process can be risky. 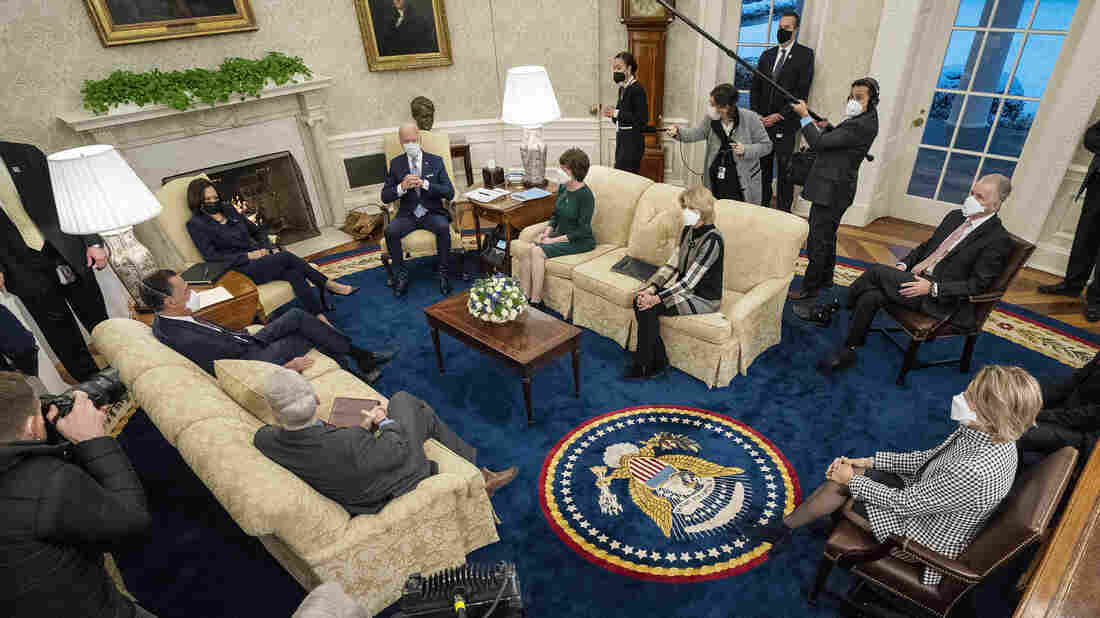 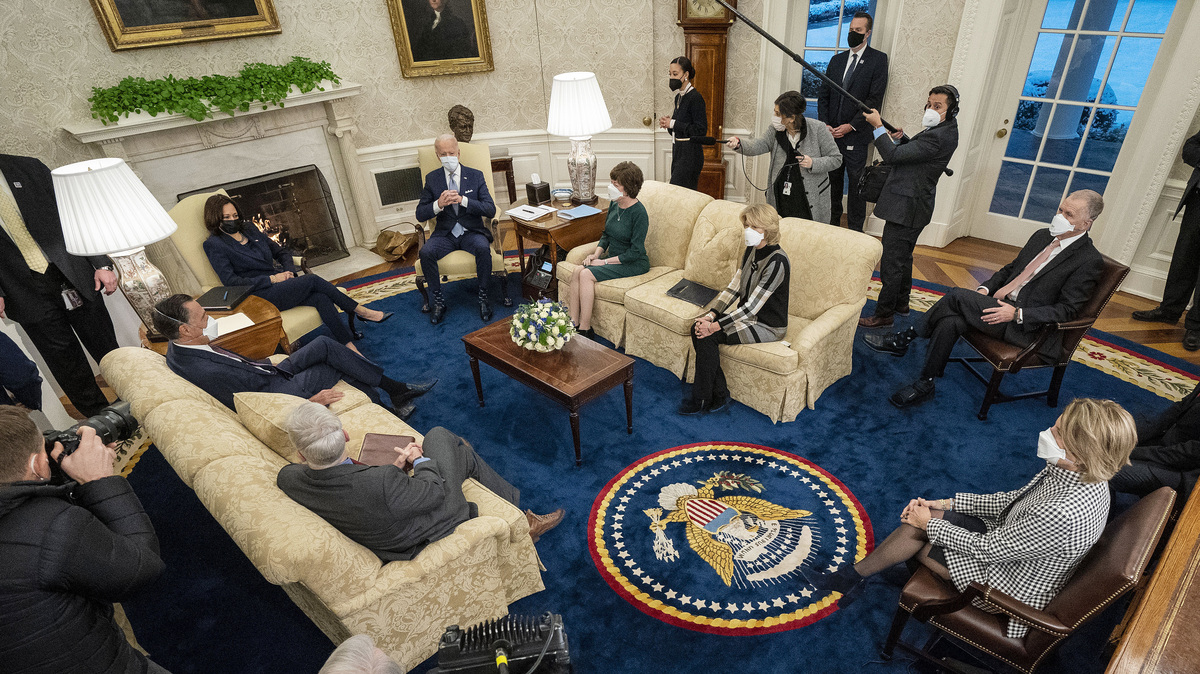 The U.S. Senate voted 50-49 along party lines on Tuesday to advance a budget resolution, setting up a lengthy push to approve $1.9 trillion in coronavirus relief requested by President Biden.

Republicans have already told Biden they won't go that big, but in an effort to seek bipartisanship, Biden had a group of 10 Republicans to the White House Monday. Ten is an important number, because it's exactly the number of Republicans that Democrats would need to end a filibuster and pass the legislation.

But congressional Democrats say they're not going to let the possibility of bipartisanship get in the way of passing a needed bill. The vote on the budget resolution sets in motion a decades-old budget rule called reconciliation to get around the 60-vote threshold to end a filibuster and pass the legislation with a simple majority.

Meeting With Republicans On COVID-19 Relief, White House Says Biden 'Will Not Settle'

But it's complicated — and some of Democrats' priorities might not qualify under this process. So what is reconciliation, how does it work, and what are the challenges? We explain:

Reconciliation is a rule that was included when Congress rewrote budget rules in 1974. The goal was to allow Congress to pass a new budget resolution with new spending priorities and quickly pass the legislation to reflect the needs of the moment. The Congressional Research Service, a nonpartisan research group in Congress, reports reconciliation was first used in 1980 and has been used to pass 25 reconciliation bills.

That process allows the party in control of Congress to pass most big-dollar legislation with a simple 51-vote majority in the Senate without having to worry about a filibuster.

Biden's Ethics Pledge Is Stringent. Some Want It To Be Even Stronger

'Fully Erased': With Harris' Rise, There Are No Black Women In The Senate

Congressional Democrats say they've heard Biden's calls for bipartisanship, but they're setting up a budget work-around — just in case.

"By the end of the week, we will be finished with the budget resolution, which will be about reconciliation, if needed," House Speaker Nancy Pelosi, D-Calif., told reporters last week. "I hope we don't need it. But if we need it, we will have it."

In recent years, though, reconciliation has become a popular tool to get big partisan bills passed when one party has full control of Washington. Democrats used reconciliation to pass some health care changes in 2010, and Republicans used it to pass tax cuts in 2017, as well as in their failed attempt to repeal the Affordable Care Act during Donald Trump's presidency.

"This is a way to find a way to change spending and revenue that does not have to deal with the partisan gridlock," Moller said. "It's not a backdoor process; it's more like express lanes on the highway. It's a way to get you where you want to go, sometimes faster, oftentimes with less congestion."

But there are some pretty significant road blocks along the road to reconciliation.

A speedy but treacherous path

Budget reconciliation isn't as simple as adding policies to a budget bill and passing that legislation with 51 votes in the Senate.

The process starts with a budget resolution that includes special rules and procedures for reconciliation.

Typically, Congress only gets one shot at reconciliation each year, because they are only allowed to pass one budget for each fiscal year.

This year is different. The previous Congress did not pass a budget for 2020, which means Democrats have the chance to attach reconciliation instructions to a 2020 budget and a 2021 budget, if they can agree on what those budgets should include.

Once they agree on a budget, simple majorities in the House and the Senate have to pass the same language. Then, the clock starts for reconciliation and things can move quickly.

There's a time limit on debate in the Senate, and there's no filibuster when the clock runs out.

"This is the secret sauce of budget reconciliation," Moller said. "It's a lot smoother, and you don't have to deal with the filibuster, because at the end of the time, they just start taking votes."

Has to be about government spending

Some things, like the Social Security program, can't be altered.

Those initial guard rails are important because if the lawmakers writing the reconciliation bill get them wrong, the whole process can fall apart.

Budget bills come with a special voting bonanza called a "vote-arama" that kicks off when the required 50 hours of debate are over.

The voting just goes on and on until senators run out of amendments — or the energy to keep voting — and reach a unanimous agreement to stop. Vote-aramas have been known to go on for hours, sometimes beginning in the morning and going all night long.

The vote-arama is also a time when senators will try to undo parts of the budget resolution through amendments and an objection known as a budget point of order.

Objections and points of order in the Senate are governed by a budget rule named for its chief author, former Sen. Robert Byrd, D-W.Va., known as the "Byrd Rule."

Part of the rule requires reconciliation bills be confined to changing spending and revenue. It bars "extraneous policies" from being included in reconciliation. Any policy needs to be directly budget related.

Committees writing the polices need to keep those in mind and so do the senators writing amendments. Senators can challenge measures the run afoul of those rules through a budget point of order.

The Senate parliamentarian is then consulted for rulings on whether or not something fits the rules.

Not a fool-proof plan

One major failure in recent years was the GOP effort to overturn the Affordable Care Act. Republicans could not agree on how to repeal and replace the law. They fought for months to try to reach an agreement. Eventually they tried to pass a "skinny repeal" to buy more time to write a replacement.

That's when former Sen. John McCain, R-Ariz., delivered his famous thumbs down, ending GOP hopes of a speedy repeal. At the time, McCain was battling the brain cancer that would eventually end his life. A few days earlier, when he first returned to the Senate after cancer surgery, McCain decried the bitter partisanship behind the push to repeal the ACA through a partisan tool — reconciliation.

"We've been spinning our wheels on too many important issues because we keep trying to find a way to win without help from across the aisle," McCain said in a speech on the Senate floor. "That's an approach that's been employed by both sides, mandating legislation from the top down, without any support from the other side, with all the parliamentary maneuvers that requires. We're getting nothing done."

Democrats say they're leaving the option open for reconciliation even as Biden meets with Republicans to discuss a bipartisan solution.

Some Republicans have criticized Democrats for even considering reconciliation as a way to pass legislation as massive as the $1.9 trillion Biden is suggesting. Sen. John Cornyn, R-Texas, is already raising red flags about Biden's plan to increase the federal minimum wage to $15. Cornyn told reporters in the Capitol that a minimum wage increase isn't allowed under budget rules.

"Now we're hearing rumors about trying to use trying to break the reconciliation rules to pass things like a $15 minimum wage and so forth," Cornyn said. "But that would just destroy the Senate as an institution just as bad as eliminating the filibuster."

Like in the House, that isn't stopping Senate Democrats from getting things underway. Senate Budget Committee Chair Bernie Sanders, I-Vt., told reporters last week that he is preparing to move ahead with the minimum wage hike included.

"I think there was a consensus if Republicans aren't prepared to come on board, that's fine," said Sanders, who trumpeted the increase during his 2016 and 2020 presidential campaigns. "We're not going to wait. We're going forward soon and aggressively." 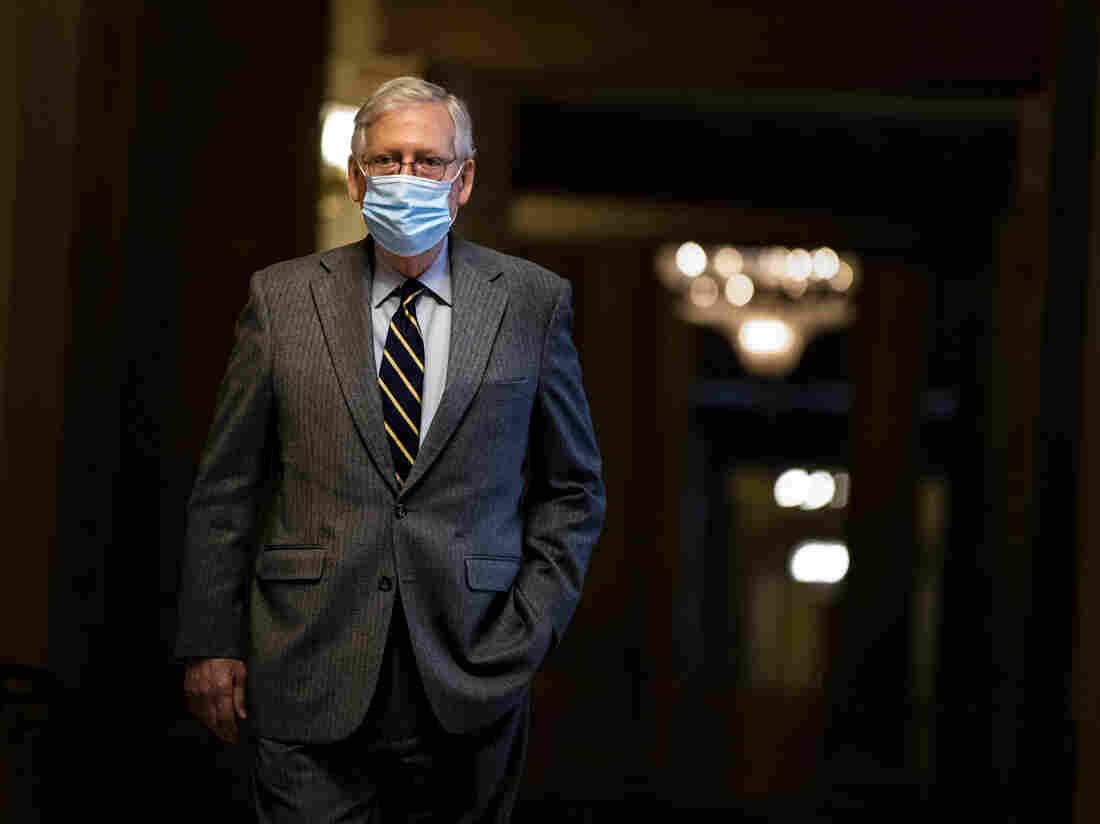 Senate Republican Leader Mitch McConnell is warning Democrats not to use reconciliation or to get rid of the filibuster — or when Republicans regain control, he will use all the same levers. Samuel Corum/Getty Images hide caption 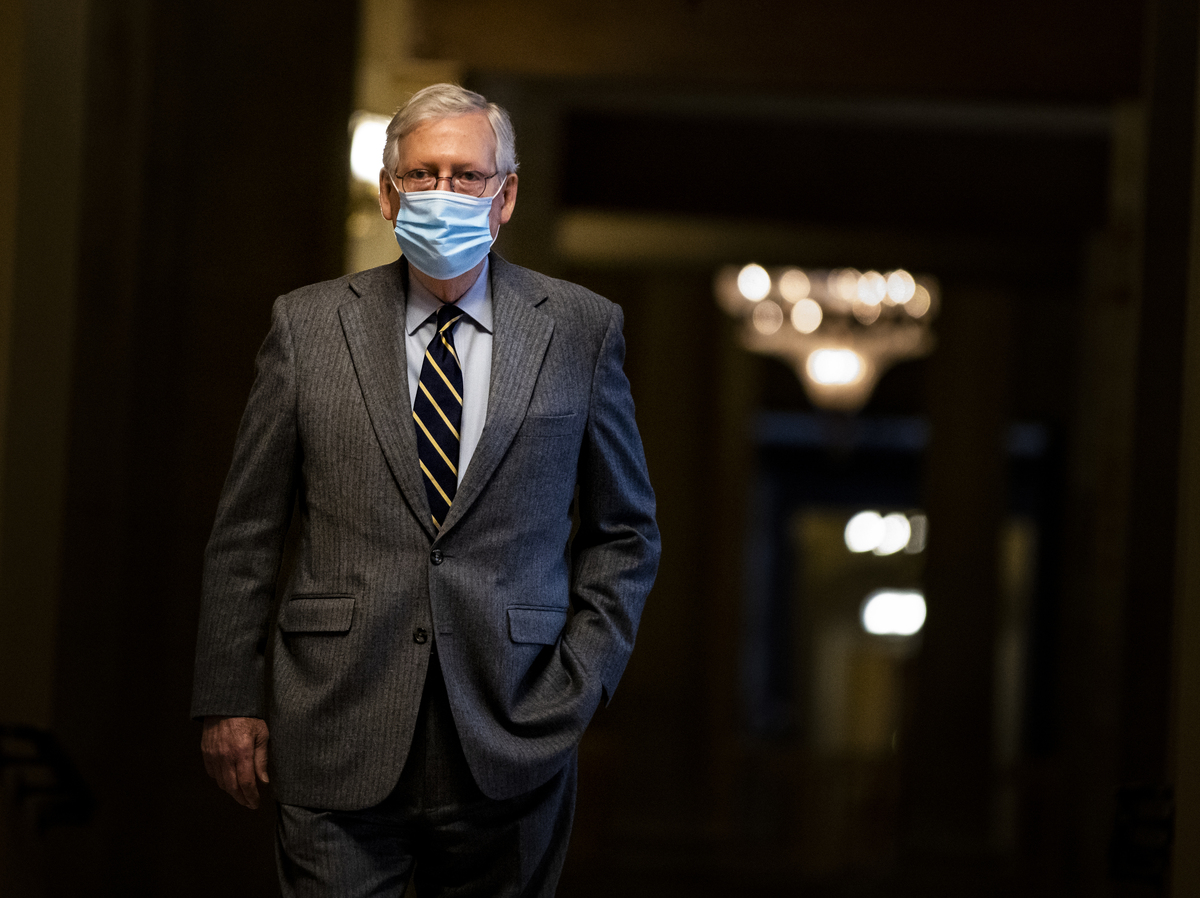 Senate Republican Leader Mitch McConnell is warning Democrats not to use reconciliation or to get rid of the filibuster — or when Republicans regain control, he will use all the same levers.

Despite those challenges, reconciliation is seen by some as a way to advance fiscal legislation along party lines without setting off another filibuster fight.

"All pressure cookers have a release valve, so it doesn't explode," Third Way's Moller said. "This is a normal process to hit the release valve."

That could be, especially considering how close the Senate may be to forever changing as we know it.

In the Senate, given Democrats just barely hold a majority, there are really only two ways to skip a bipartisan deal — try for reconciliation, or kill the filibuster.

In order to advance most legislation to a final vote and end a filibuster, Senate rules require 60 or more senators to vote in favor of doing so.

Eliminating that first vote — and the filibuster blockade — is known colloquially within the Senate as "the nuclear option."

And the term has a Cold War reference for a reason. Deploying that plan would result in potentially ever-escalating power moves by the parties that threatens to completely "blow up" the rules of the Senate forever.

Case in point: Republicans "went nuclear," eliminating the filibuster, so Trump could get through his Supreme Court nominees. That was after Democrats "went nuclear" when they were in the majority for lower-court judges, because Republican Senate leader Mitch McConnell was blocking former President Barack Obama's nominees in to an unprecedented level.

Democrats and Republicans have flirted with the idea of getting rid of the filibuster for legislation for years.

Some progressives, in particular, say the filibuster is creating gridlock and bitter partisan bickering. That's because although the intent of the 60-vote threshold, which has been around for more than 100 years, was to spur negotiation among good-faith actors, that's not how it's been used in recent years.

Though both parties have used the filibuster to thwart the party in power, McConnell used it far more than any minority leader in history during the Obama presidency.

Without the filibuster, Democrats say they could try to pass COVID relief and maybe open negotiations with the party to try to enact the Green New Deal or Medicare for All with a simple majority.

People who believe in the filibuster system say it would disincentivize negotiation and bipartisanship — and would make the laws Congress passes nothing more than partisan whims.

McConnell has warned that if Democrats get rid of the filibuster and go on to pass a slew of progressive priorities, Republicans will respond in kind — as he did when it came to judges.

"When Republicans next controlled government, we'd be able to repeal every bill that had just been rammed through," McConnell said in a speech on the Senate floor. "And we'd set about defending the unborn, exploring domestic energy, unleashing free enterprise, defunding sanctuary cities, securing the border, protecting workers' paychecks from union bosses. You get the picture."