Accessibility links
Review: 'Good Neighbors,' By Sarah Langan Sarah Langan's new novel takes the old theme of "something rotten in suburbia" and pushes it into the future, in an intense, uncomfortable story about class resentment and the horrors it can lead to. 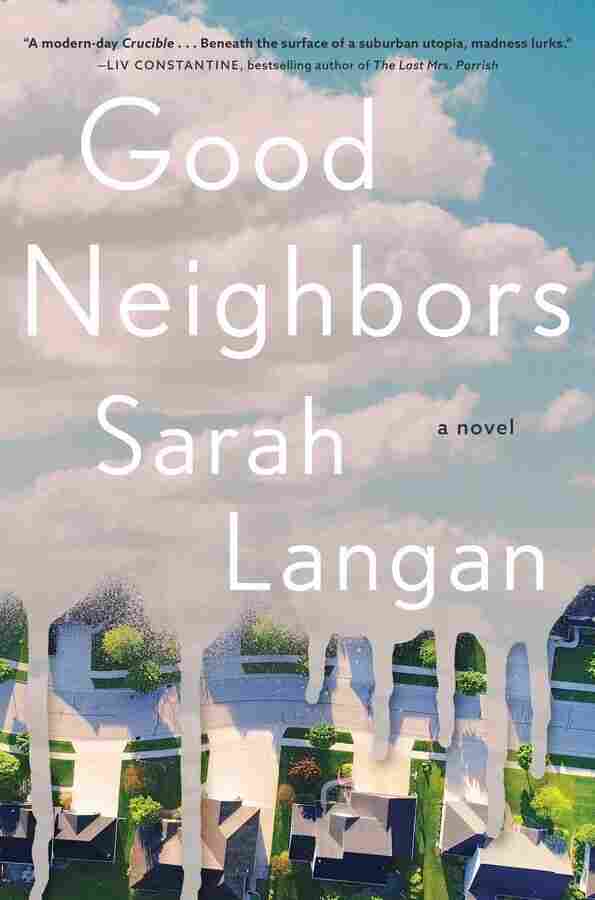 Sarah Langan's Good Neighbors is one of the creepiest, most unnerving deconstructions of American suburbia I've ever read. Langan cuts to the heart of upper middle class lives like a skilled surgeon and exposes the rotten realities behind manicured lawns and perfect families, and the result is horrifically plausible.

Maple Street is a crescent of perfection in suburban Long Island. It's a safe place where families tend to their Harvard-bound children, no one worries about mortgage or car payments, and everyone gets along splendidly. But there's something dark and evil bubbling beneath the nice cars and bright smiles, and when the Wilde family moves into the neighborhood, everything changes. The Wildes are disruptive because they don't fit in. Dad Arlo is a has-been rock star with arms covered in tattoos of demons that hide his track marks. Mom Gertie is a tall blonde with breast implants who used to be a beauty queen. The kids, Julia and Larry, are weird, loud, and foulmouthed.

Despite this, Rhea Schroeder, the queen of Maple Street — and a college professor unable to cope with her dark past — welcomes the Wildes and befriends Gertie. But when Rhea drunkenly shares too much with her new friend, she changes her mind: Gertie is now her enemy. Tensions ratchet up even further when a sinkhole opens in a nearby park, and a few days later, Rhea's daughter Shelly falls into the sinkhole and the façade finally collapses. During the search for Shelly, accusations against the Wildes fly, physical altercations erupt, and lies eventually lead to murder.

Maple Street is a crescent of perfection in suburban Long Island ... But there's something dark and evil bubbling beneath the nice cars and bright smiles.

Despite being mostly about upper middle class white Americans, Good Neighbors is anchored in otherness. The Wildes know they don't belong. They understand they're constantly "breaking tacit rules," but they don't know what those rules are. And when Rhea turns against them, she knows just where to stick the dagger in, because she knows the rest of the neighbors consider them "ghetto." In the absence of race, class is a perfect excuse to hate. The Wildes don't dress nicely, their car is old, and they weren't born into money like everyone else, so they're perpetual outsiders whose differences make them lesser. Using strange events that preceded Shelley's falling into the sinkhole, Rhea accuses Arlo of raping her daughter, and no one jumps to his defense. It only gets worse from there.

Langan has created an entire mythos around "the Maple Street Murders," peppering her narrative with magazine, newspaper, and scholarly articles about the event. These writings shift in tone and author and often include interviews that offer different perspectives on the murders — and sometimes perpetuate lies. Here's an excerpt from Believing What You See: Untangling the Maple Street Murders that discusses Gertie's role in Shelly's (nonexistent) sexual abuse by her husband:

She was shuffled through the foster system until her father's wife, Cheerie Maupin, agreed to keep her. Cheerie was problematic. She freely admits to having loaned Gertie out to men. It's not so surprising, then, that Gertie would have missed all the signs of sexual abuse. It's equally possible that she did recognize them, but chose to cover for her husband. Potentially, she even participated.

Langan's unflinching prose obliterates suburbia's shiny veneer and makes Good Neighbors an uncomfortable read. These people live in beautiful houses with air conditioning where everything is clean, they have nice jobs, and their kids never have to worry about their clothing "being someone else's hand-me-downs." However, even those kids can see beyond that. As Charlie, the 13-year old son of the Walshes — who live two houses down from the Wildes — grumbles: "It's a lie. There is no perfect." Loveless marriages, spying on neighbors, lies, physical and psychological abuse, hidden crimes, pill addictions, mounting frustration, and dissatisfaction brew behind closed doors.

'The Blade Between' Walks The Boundary Of Horror And Noir

This is a story about murder, but it's also much more. This is narrative about childhood trauma and motherhood and how both shape people. Narratives about suburbia's rotten core aren't new, but Langan brings them into the present and pushes them into the future. In fact, the murders take place in 2028, and the book written about them is published 15 years after, proving ugliness under pretty facades is a perennial problem.

Good Neighbors shows how easily the discourse can go from disliking someone to spilling blood, and how those involved don't feel responsible as long as they're not alone: "Consent given, the inchoate scheme took form, and so many contributed to its birth that none felt wholly responsible. They were passengers, riding the momentum of something greater than themselves."

"We had a problem on the block and the cops wouldn't solve it. So we solved our own problem," says one of the neighbors — and he could easily be your neighbor. That plausibility is what makes this novel such a harrowing read. You will read this and be enthralled, but you will never look at your neighbors the same way again.