Accessibility links
2 Prominent 'New York Times' Journalists Depart Over Past Behavior Science reporter Don McNeil Jr. admitted he was wrong to have used a racial slur. Producer Andy Mills said he had learned from past misbehavior but a "pressure campaign" made it impossible to stay. 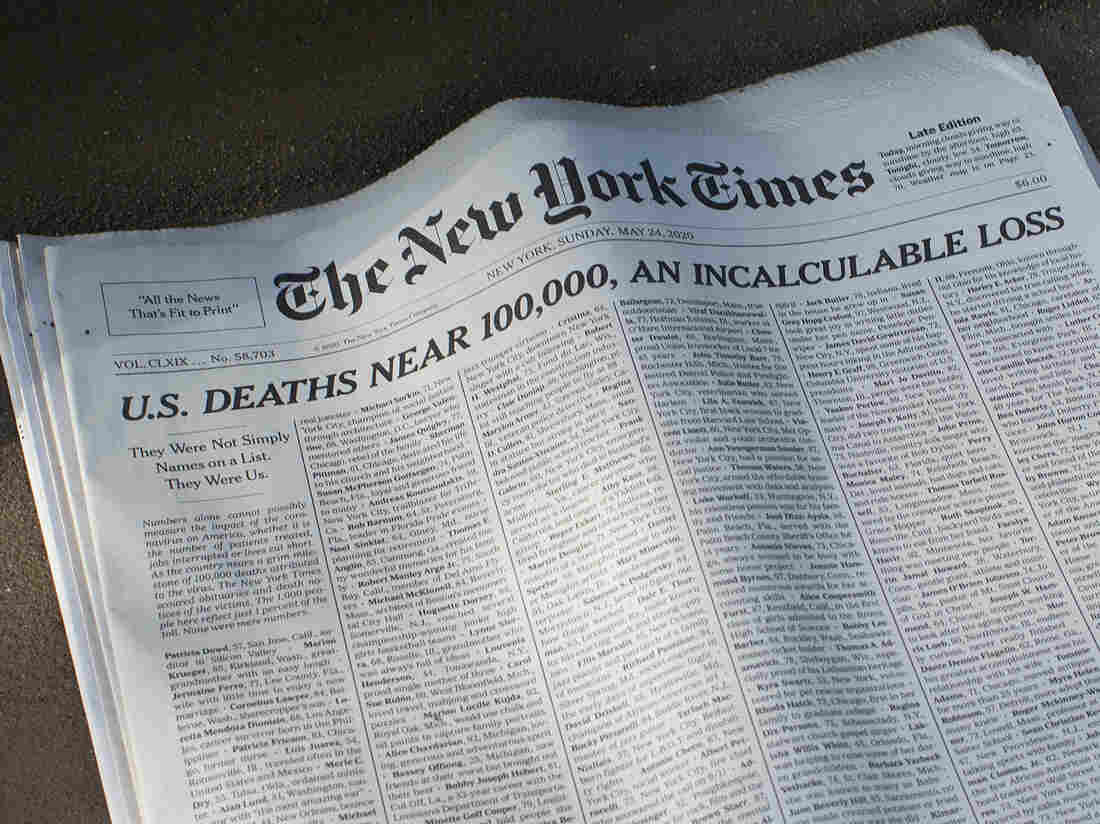 In the words of one knowledgeable New York Times newsroom staffer, who spoke on the condition of anonymity about the resignations, "two boils were lanced today." Andrew Lichtenstein/Corbis via Getty Images hide caption 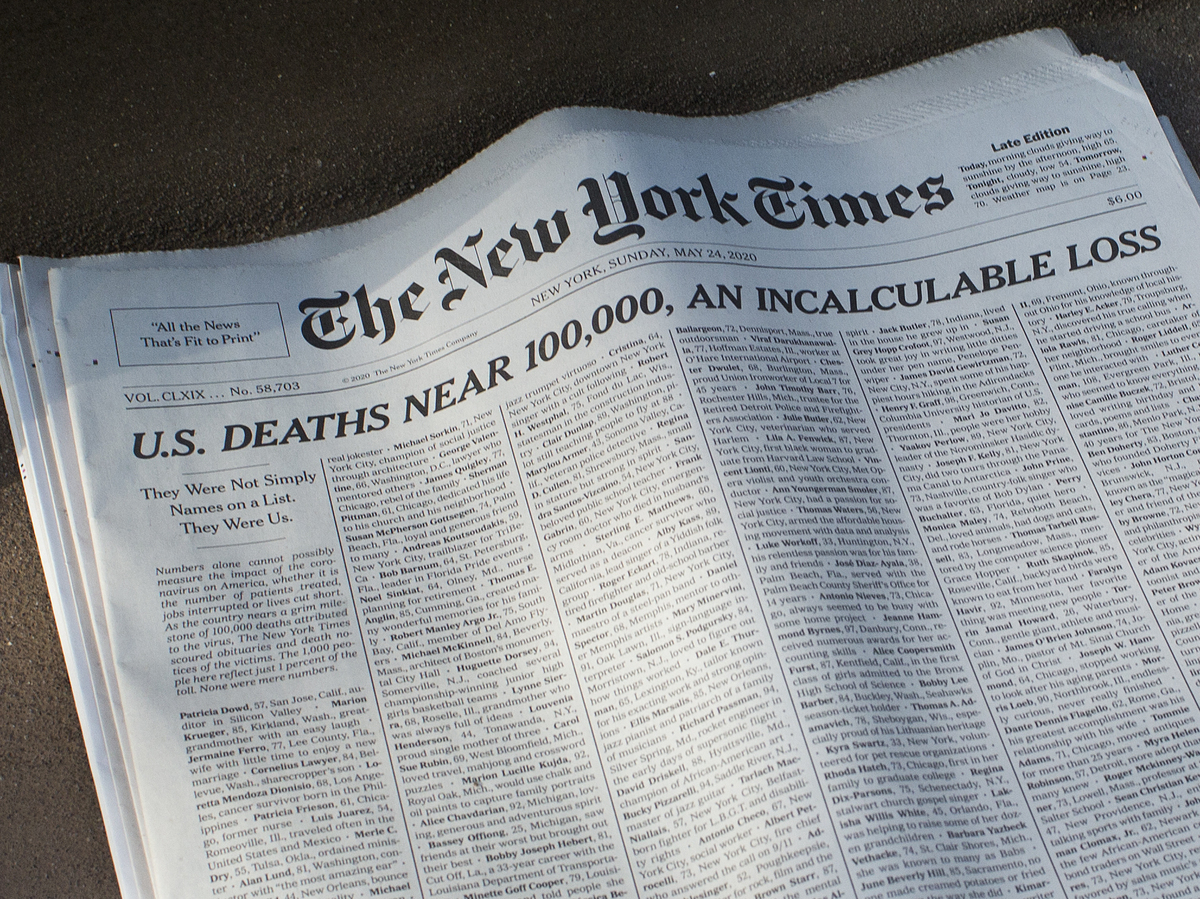 In the words of one knowledgeable New York Times newsroom staffer, who spoke on the condition of anonymity about the resignations, "two boils were lanced today."

Two widely heralded journalists for The New York Times departed the paper Friday after unrelated episodes of their past behavior received sharp new scrutiny from other media outlets, readers and colleagues.

Donald McNeil Jr., recognized as one of the nation's leading reporters on COVID-19, left after fallout from the disclosure in The Daily Beast that he had used a racial slur during a New York Times-sponsored trip for high school students. The revelation of his use of the N-word, which he said came in response to a student's query about the appropriateness of the word in a young friend's video, stirred a formal protest among more than 100 of his peers in the newsroom.

Separately, audio producer Andy Mills, the co-creator and co-host of the hit podcast Caliphate, resigned, saying past accusations of inappropriate behavior toward female colleagues while a public radio producer had made it difficult for him to stay at the Times. His status and conduct, a focus of contention several years ago, resurfaced after the core of the reporting of Caliphate collapsed. The paper published an investigation in December that concluded that its key subject appeared to have lied about being an executioner for ISIS after Canadian authorities charged him with a terrorism hoax.

In each case, however, the actions of Times news leaders appeared to baffle many of their colleagues. For several who spoke to NPR, it was the fact these circumstances were allowed to fester for so long. For others, the reversals defied common sense.

In the words of one knowledgeable Times newsroom staffer, who spoke on the condition of anonymity, "two boils were lanced today."

Back in 2019, after parents had complained McNeil's language, Dean Baquet, the paper's executive editor, rebuked McNeil, but let him stay on the job. McNeil had previously covered the deadly Ebola outbreak in Africa in 2014.

The Times assigned McNeil to take on one of the most critical beats of the era in the COVID-19 pandemic. Late last month, in one sign of his importance to the paper and the subject, the Times published his one-on-one interview with Dr. Anthony Fauci, one of the top federal officials addressing the pandemic and used it as an episode of its flagship podcast, The Daily. The Daily Beast also reported McNeil's work was formally submitted for consideration for a Pulitzer Prize.

Baquet had defended McNeil's continued presence on staff as recently as last week. On Friday evening, he and managing editor Joe Kahn called the reporter's departure "the right next step."

Mills had emerged largely unscathed after the Times admitted in December that Caliphate, a podcast Mills had helped create, was largely based on the fabrications of its primary subject. Indeed, Mills guest-hosted an episode of The Daily the week after the newspaper had acknowledged its errors and demoted Caliphate host Rukmini Callimachi.

In his parting letter to colleagues, McNeil said he had used a racial slur in a context that he had thought defensible at the time but now realizes was not.

"I was asked at dinner by a student whether I thought a classmate of hers should have been suspended for a video she had made as a 12-year-old in which she used a racial slur. To understand what was in the video, I asked if she had called someone else the slur or whether she was rapping or quoting a book title. In asking the question, I used the slur itself."

According to the Daily Beast, parents complained that McNeil had been racially offensive at several different moments.

McNeil concluded his note by apologizing for offending his colleagues and hurting The Times, where he had worked since 1976.

In a joint letter to the newsroom, Baquet and Kahn said, "We do not tolerate racist language regardless of intent." They pledged to better define and enforce guidelines on workplace behavior, including "red-line issues on racist language."

In the resignation letter that audio producer Mills posted online, he acknowledged he had made missteps earlier, as a producer at the public radio station WNYC in New York. There, he said, he had gotten a reputation as a "flirt," had given a co-worker a back rub during a team meeting and had poured a drink on a colleague's head at a bar. Mills said he was formally rebuked and passed over for a promotion at WNYC as a consequence of his actions.

He emphasized the behavior in question was years in the past and said he had learned his lesson long ago. Yet, as the fallout from Caliphate cast light on the Times' disparate treatment of Mills and Callimachi, Mills came under new pressure to explain his earlier behavior toward women.

Host of 'The Daily' Clouds 'N.Y. Times' Effort To Restore Trust After 'Caliphate'

"The allegations on Twitter quickly escalated to the point where my actual shortcomings and past mistakes were replaced with gross exaggerations and baseless claims," he wrote.

"As the pressure of this online campaign has grown to encompass some staffers of The Times, it has led to a climate where, even though I still love the mission of this important institution, I feel it is in the best interest of both myself and my team that I leave the company at this time," he wrote.

Baquet and Kahn acknowledged Mills' departure with a note that spoke of the new leadership over the growing audio division and stressed the need for a collaborative, collegial and respectful workplace.