Accessibility links
Chicago Reports Tentative Deal With Teachers Union To Reopen Schools The teachers union said "there is no agreement yet" but a framework its members must review. The city said it's planning for pre-K and special education programs to resume in person this week. 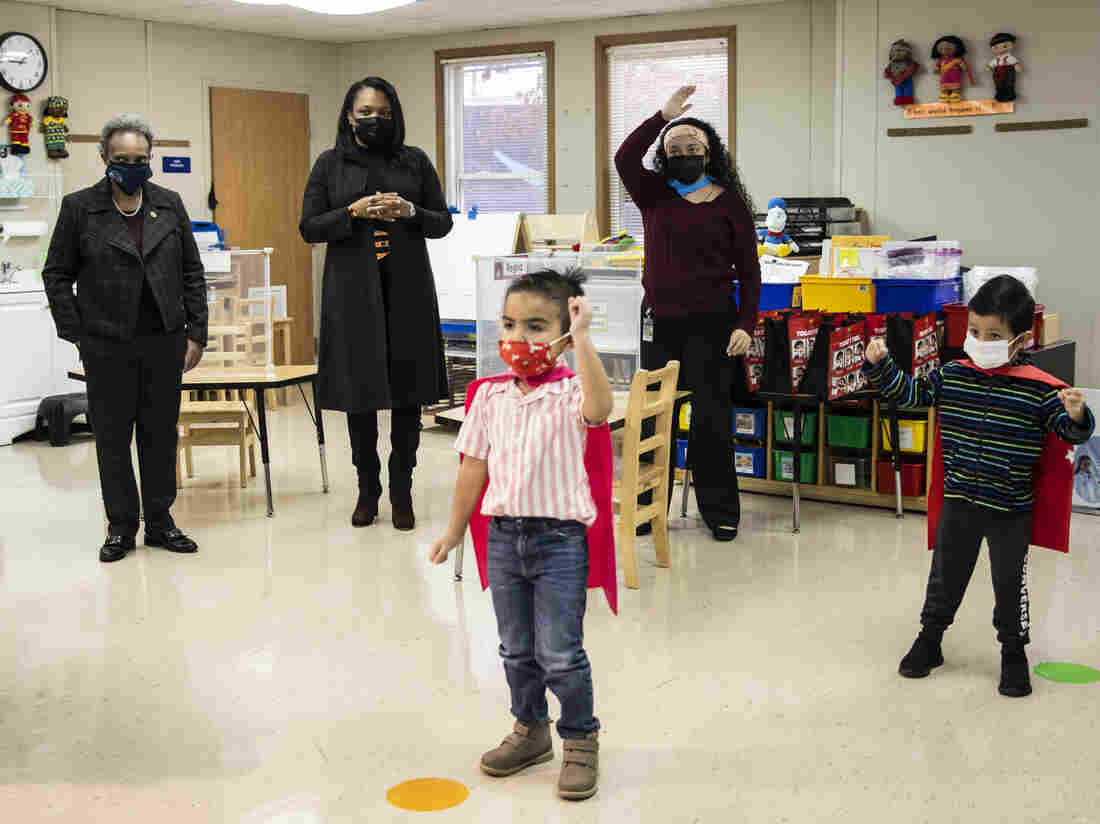 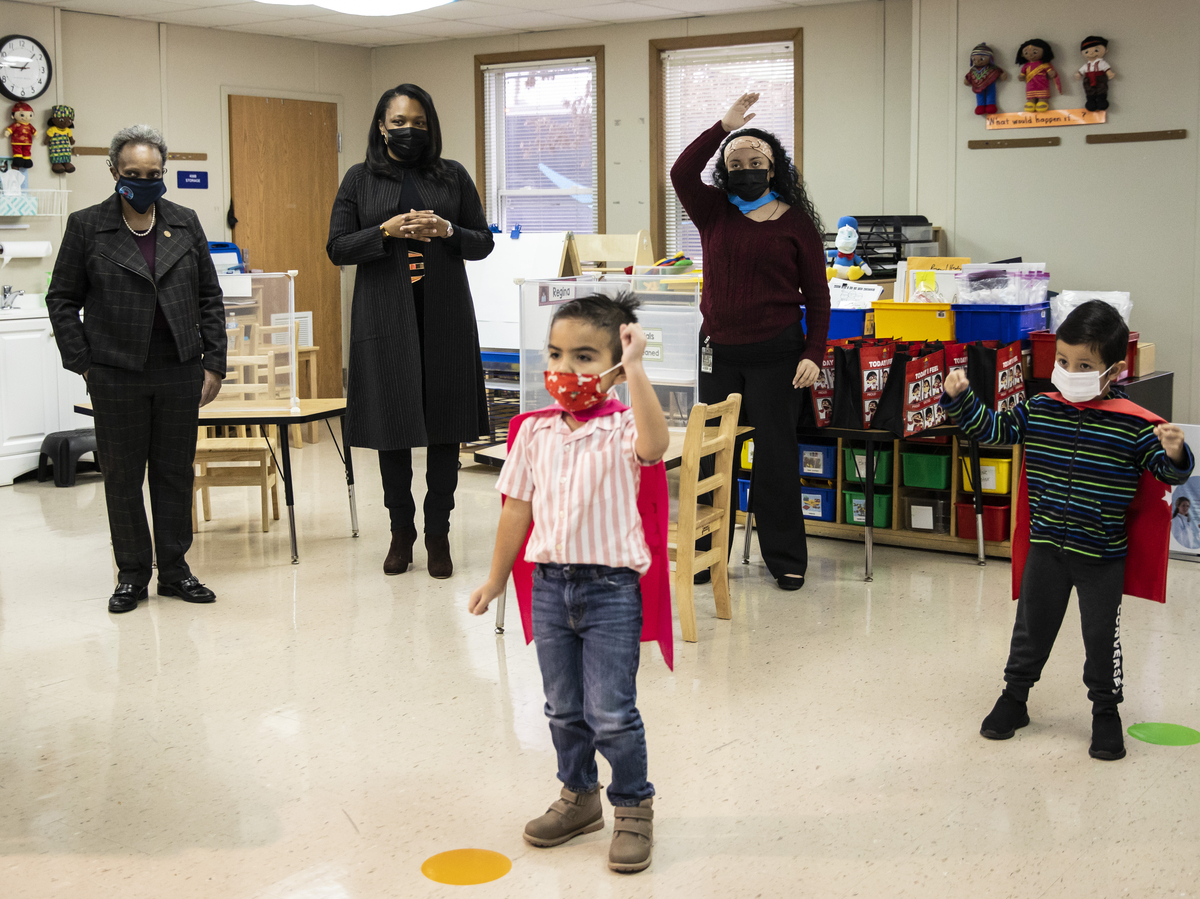 The showdown between the city of Chicago and its teachers may be near an end.

Chicago Public Schools announced a tentative agreement Sunday with the teachers union for in-person learning to resume starting as early as Thursday on a phased-in schedule and promises to vaccinate 1,500 school staff each week.

"Nearly eight months ago, we began discussions with the Chicago Teachers Union about how to safely open schools," the school system said in a tweet. "We can now report that a tentative agreement has been reached that will allow CPS students who want to learn in person to return to their schools."

The Chicago Teachers Union said on Twitter there is "no agreement yet," but it added that there is a "framework that all of our members must first review and assess, because it is our members who are being asked to return to school buildings in the midst of a global pandemic."

The school system said it's planning for pre-K and special education programs to resume in-person learning starting Thursday. Students in kindergarten through fifth grade would return March 1 and students from sixth through eighth grades would return March 8.

Mayor Lori Lightfoot and Chicago Public Schools had been planning to reopen for some in-person classes this coming week. But the union had been concerned about the logistics of returning to school while the pandemic is still raging.

Should Schools Reopen If Teachers Aren't Yet Vaccinated? CDC Will Soon Weigh In

Earlier, in a letter to staff and families Friday evening, Lightfoot and school district CEO Janice Jackson said that if certain pre-K teachers and other staff don't report to classrooms on Monday, they "will be deemed absent without leave," and would have their access to online teaching tools revoked.

If the district makes good on that promise, it could lead to the second teachers' strike in the city in less than two years. The union had said it would strike if the district locks out teachers from working from home.

"We love your children," the union wrote in a letter to parents on Thursday. "We desperately want to be back in classrooms with them, but we are not willing to accept the inevitable illness and death a reckless reopening will inflict on our city."

Chicago Public Schools had planned for about 60,000 kindergarten through eighth grade students to begin returning to the classroom this past week. But facing pushback from educators, the city called a "cooling-off" period through Thursday so that negotiations could continue.

A CTU spokesperson told NPR on Saturday that teachers would do everything they can to avoid a walkout. "We remain committed to bargaining for as long as it takes to reach an agreement that maximizes safety for our school communities," said Chris Geovanis. "We are going to continue to teach remotely until there's an agreement."

The main sticking point in negotiations was whether to accept CDC guidelines for determining whether it's safe to reopen schools. Around the country, some schools have been able to reopen relatively safely by following certain precautions, CDC scientists wrote in an article last month. The federal government is set to release new guidelines for reopening schools this coming week.

"The mayor's offer would pause in-person learning district-wide only if there are COVID-19 outbreaks in 50 percent of Chicago Public Schools buildings at the same time," the union said Friday. The union said that was unacceptable.

"CPS' rejection of CDC health metrics fundamentally undercuts safety in school communities," CTU President Jesse Sharkey said. "If they're serious about the science, which says schools are safe only when they're also getting mitigation right and community spread is low, then they need to stop rejecting the science-based metrics of the same agency they parrot at every turn."

Another sticking point was vaccinations: The union wants teachers to be able to get vaccinated before returning to work. But the city says there aren't enough doses to go around just yet.

Lightfoot said in a statement Friday that the union wanted to "prioritize teachers over every other resident in our city." But the city only gets 5,700 first doses every day to stretch across the entire city, officials said. There is no stockpile.

Lightfoot had argued that to meet the union's demands, "we would have to stop vaccine distribution across the entire city for everyone else." Lightfoot said that's not an "equitable" solution.

As part of the tentative agreement, Chicago schools would vaccinate 1,500 CPS employees per week, and would prioritize certain groups, including staff at high risk.

On Sunday, Chicago Public Schools said it was "doing everything in our power to vaccinate educators as quickly and equitably as possible. Through a partnership with Walgreens & @ChiPublicHealth, 2K pre-k and cluster staff and staff with medically vulnerable household members will be offered vaccinations this week."

In a statement Friday, the union had called the mayor's vaccination plan a " 'Hunger Games' system of vaccine distribution" that gives no priority to staff expected to return first, or those living or working in the city's hardest-hit communities.

"Educators forced back into buildings could still be waiting until June for vaccinations through CPS, months after the mayor proposes to fully reopen school buildings," the union wrote.

Another point of contention was whether employees with vulnerable family members should get special accommodations to continue working from home.

Chicago teachers previously went on strike for 11 days in October 2019, over issues including class sizes and having nurses and social workers in schools.