Accessibility links
Former Secretary Of State George Shultz Dies At 100 Shultz, who held four Cabinet-level positions under two different presidents, was instrumental in helping to ease Cold War tensions between the U.S. and the Soviet Union. 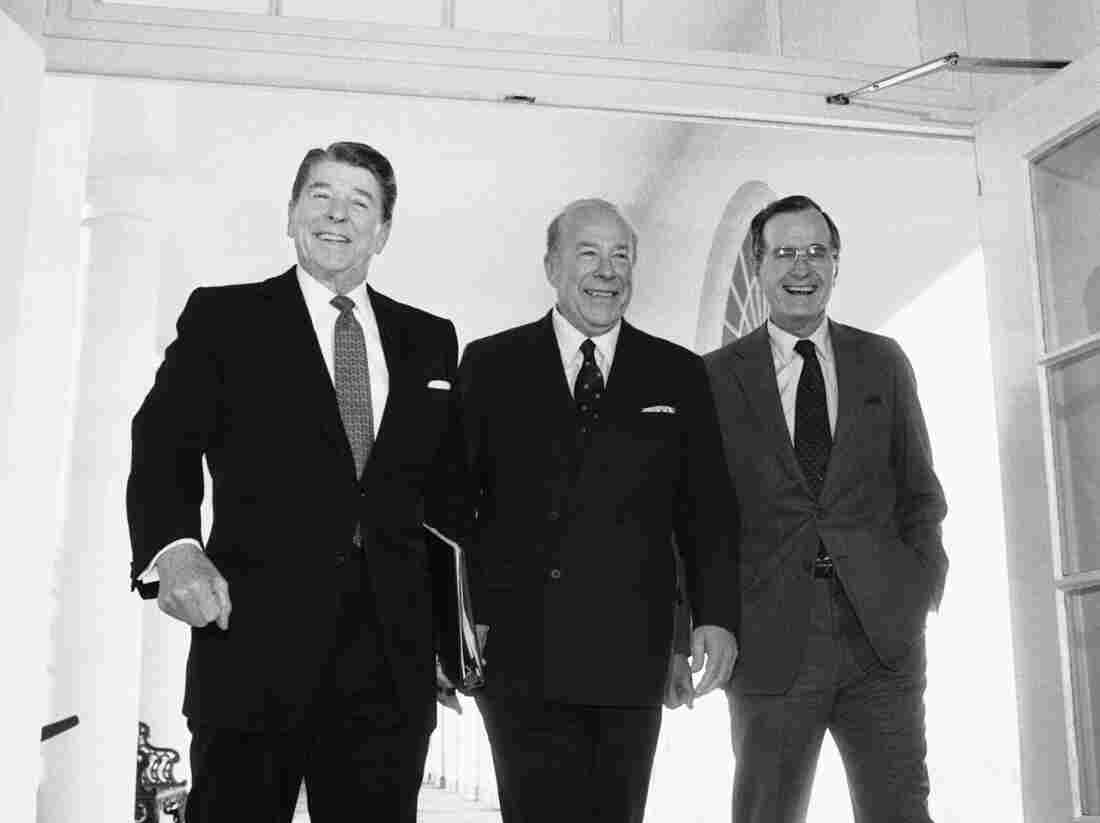 Secretary of State George Shultz, center, walks with President Reagan and Vice President George Bush on his arrival at the White House in January 1985 after two days of arms talks with the Soviet Union in Geneva. Shultz died Saturday at the age of 100. Barry Thumma/AP hide caption 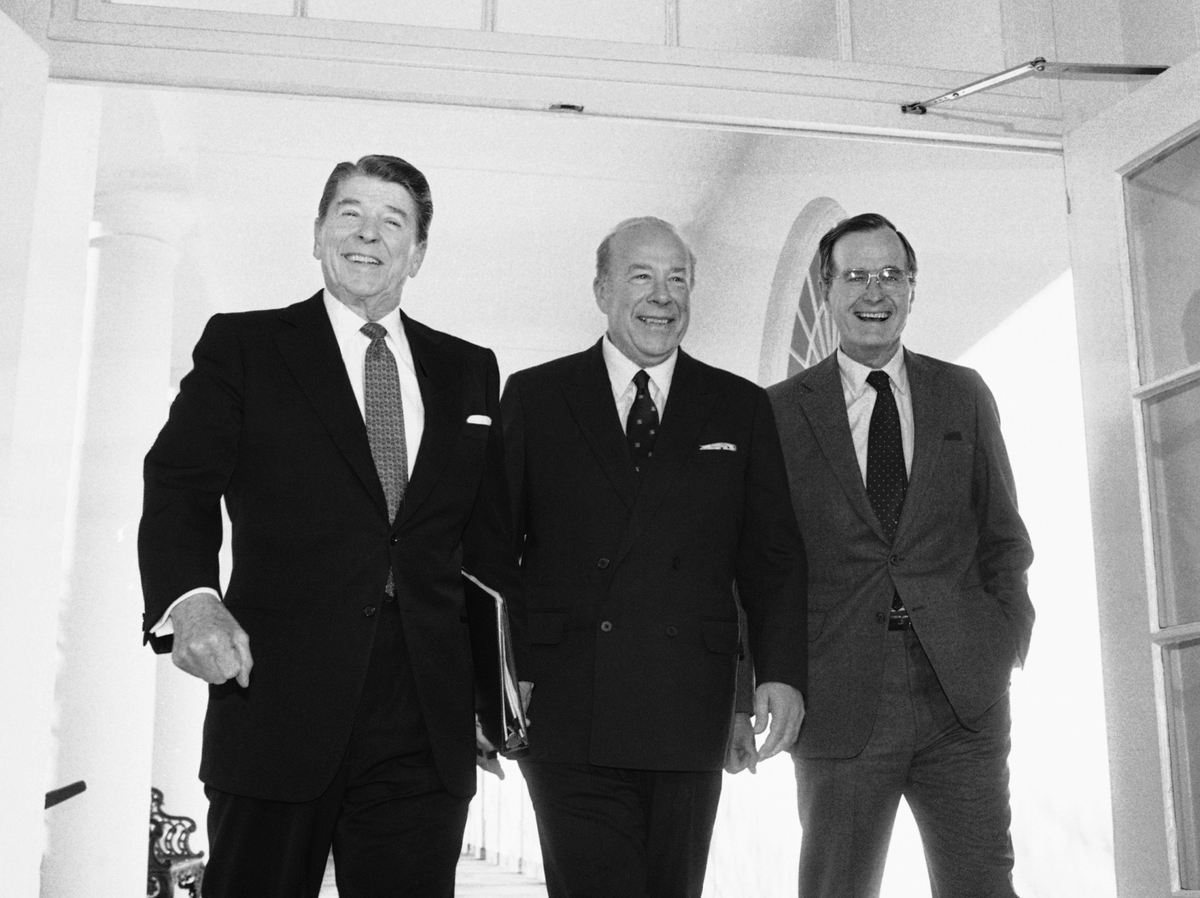 Secretary of State George Shultz, center, walks with President Reagan and Vice President George Bush on his arrival at the White House in January 1985 after two days of arms talks with the Soviet Union in Geneva. Shultz died Saturday at the age of 100.

Former Secretary of State George P. Shultz, who served in four different Cabinet-level posts and helped guide America out of the Cold War, died Saturday evening at his home in California. He was 100.

One of the key figures of 20th century American politics, Shultz served in Cabinet-level positions under two American presidents. For Richard Nixon, he was U.S. secretary of labor, director of the Office of Management and Budget, and secretary of the treasury.

But it's his role as U.S. secretary of state for Ronald Reagan for which Shultz is most famous. As secretary of state, Shultz was integral in improving relations with the Soviet Union using the tools of diplomacy.

In the early 1980s, during a time of icy relations between the world's two remaining superpowers, Shultz pushed for a broader dialogue between the U.S. and the U.S.S.R.

When Mikhail Gorbachev became general secretary of the Communist Party of the Soviet Union in 1985, Shultz was convinced Gorbachev was a new type of leader — one who understood the importance of nuclear arms control.

"He helped Reagan and Gorbachev to establish an upward spiral of trust by creating positive experiences with each other," historian Stephan Kieninger wrote for the Hoover Institution at Stanford University around Shultz's 100th birthday in December.

Those talks eventually led to the signing of the Intermediate-Range Nuclear Forces Treaty, which banned land-launched nuclear weapons capable of reaching targets between 310 and 3,400 miles away. Reagan and Gorbachev signed the agreement in 1987. By June 1991, the two countries had destroyed 2,692 ballistic and cruise missiles.

Shultz believed that agreement was only possible because of the trust that had developed between the two leaders.

"Shultz was a key player, alongside President Ronald Reagan, in changing the direction of history by using the tools of diplomacy to bring the Cold War to an end," Stanford University's Hoover Institution said in announcing his death. He was able to "not only imagine things thought impossible but also to bring them to fruition and forever change the course of human events."

After retiring from public office in 1989, Shultz went back to places where he had worked earlier in his career: the construction company Bechtel Group and Stanford. At Stanford he was a professor of international economics and a distinguished fellow at the Hoover Institution.

But Shultz remained an active participant in the political process. As an informal adviser to President George W. Bush, Shultz was often credited with helping inspire the Bush Doctrine — the idea that preemptive action is a valid form of self-defense.

Tributes poured in Sunday from politicians and diplomats. "George Shultz crafted the most successful Soviet policy the US ever had," tweeted Daniel Fried, a former ambassador to Poland, and special assistant to Presidents Bill Clinton and George W. Bush.

"He took Reagan's best strategic insights, combined them with the professionalism of US diplomats, and advanced US interests and values to benefit the world," Fried said, adding: "A great man."

Writing for the Post on Sunday, former Secretary of State Condoleezza Rice called Shultz her mentor and friend. "Now, we will have to carry on the work that he challenged us to do: to love freedom, to provide opportunity for all and to never lose a thirst for learning."

Shultz also had a cheeky side. The Chicago Tribune confirmed in 1987 that he had a tiger tattooed on his rear end — a memento from his college years at Princeton University.

"When the children were young, they used to run up and touch it and he would growl and they would run away," his wife Helena said.