Accessibility links
Progressives Are Challenging Sen. Chuck Schumer To Deliver Progressives are watching the new Senate majority leader to see if he can deliver on some of the party's most ambitious legislative goals. If not, they say he could face a primary challenge next year. 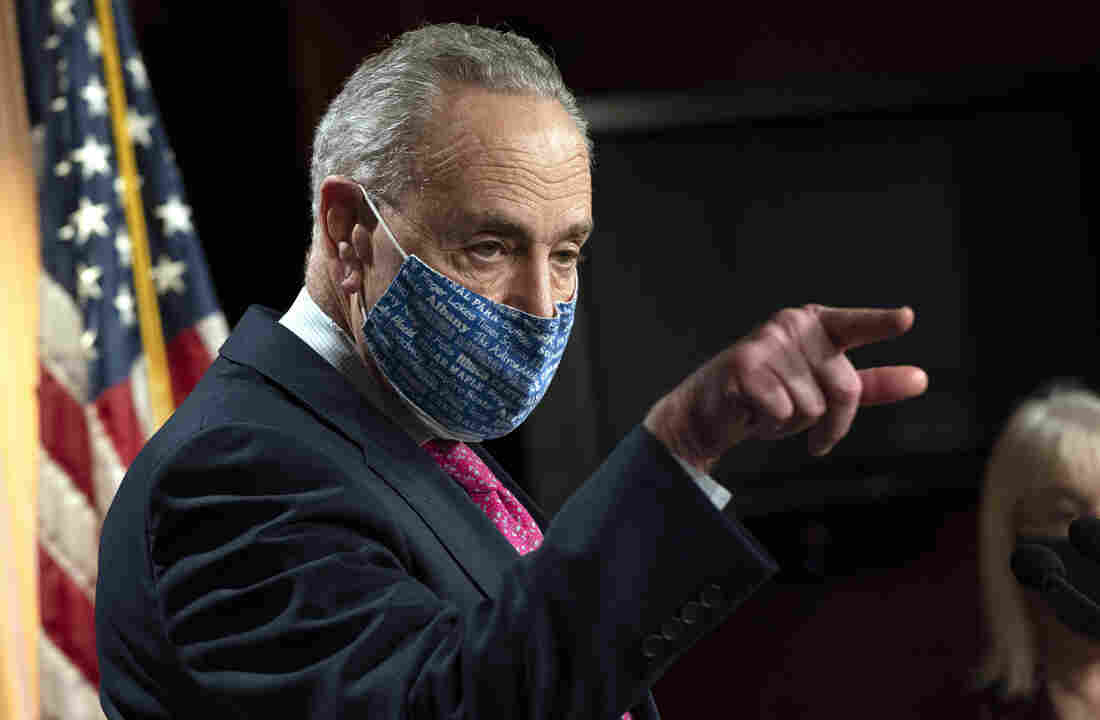 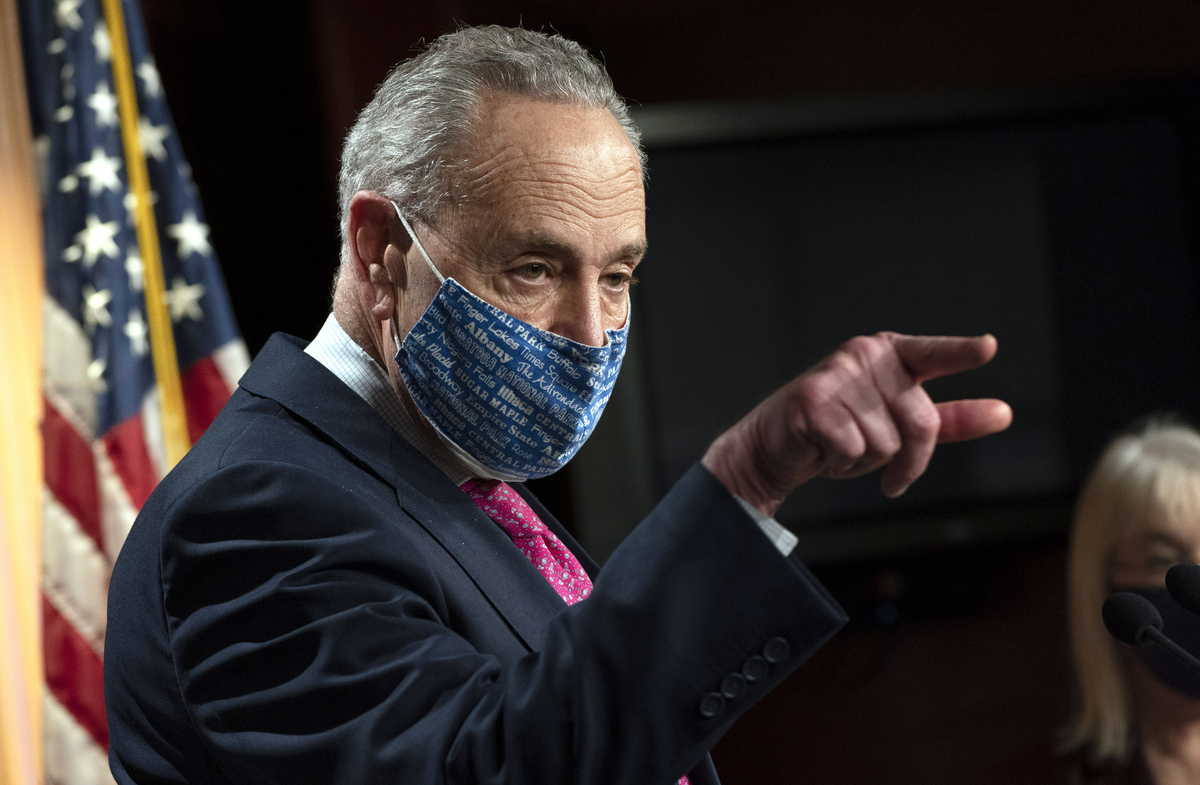 Senate Majority Leader Chuck Schumer, D-N.Y., faces a tricky balancing act: managing the ideological divides of a 50-50 Democratic majority while also running for his own reelection.

Shortly after Election Day last year, veteran Sen. Chuck Schumer of New York joined three newly elected House Democrats in their call for incoming President Biden to use his executive authority to cancel up to $50,000 in student loan debt.

"I have spoken to him. I have told him how important it is. He is considering it," Schumer said at a New York press conference with then-Reps.-elect Mondaire Jones, Ritchie Torres and Jamaal Bowman. Months earlier, Schumer had backed Bowman's primary opponent, longtime incumbent Rep. Eliot Engel.

In recent years, the 70-year-old Schumer has aligned more closely with the progressive wing of the Democratic Party, particularly on issues such as climate change. Schumer has called on Biden to declare the climate crisis a national emergency, which would enable the president to take some actions unilaterally.

For Biden Administration, Equity Initiatives Are A Moral Imperative

While progressive activists support the shift, they're skeptical.

"I think what progressives are worried about is that Sen. Schumer might be doing a bunch of press conferences in New York talking about his progressive bonafides but he's not doing much to organize and unite his caucus around those policies," Shahid said.

After more than 20 years in the Senate (and nearly 20 years in the House prior to that), Schumer is facing one of the trickiest balancing acts of his career as he steps into the role of Senate majority leader for the first time. He must manage the ideological divides of a 50-50 Democratic majority while running for his own reelection in 2022.

While Schumer has safely won reelection throughout his career — and even went unchallenged in his 2016 primary — progressive activists say that if Schumer does not deliver as Senate leader, he could face a primary challenge next year.

If progressives in New York are sounding a little bullish these days, it's not without reason. In no other state has the left wing of the party mounted as many successful and high-profile primary challenges to incumbents in recent years, delivering victories for progressive stars like the freshman Bowman and Rep. Alexandria Ocasio-Cortez, whom progressives view as a possible primary challenger to Schumer, although she has not indicated whether she is considering it.

Biden, Democrats Prepare To Go It Alone, Believing Most Of Country Is On Their Side

"This is not a guy who has ignored his own politics and brand, particularly as it comes to Democrats across New York state," he said. "Just having a brand, that somebody like [Ocasio-Cortez] has, is not enough. I think you need a lot more, and Chuck Schumer is also not going to, I believe, make the mistakes that some others have made in terms of getting tripped up in their primaries."

But pressure is on the newly Democratic-controlled Washington to deliver on some of the party's most ambitious legislative goals.

"The word of this Congress has to be action and I think [Schumer] understands that," said Maurice Mitchell with the Working Families Party, a liberal New York-based minor political party.

Schumer is arguably the most critical player in this Congress, because getting legislation through the Senate is one of the biggest hurdles to getting bills to Biden's desk. It's why progressives want Schumer to change the Senate rules to scrap the filibuster to pass all legislation with simple majorities, if Republicans unite to block their agenda. One problem: Schumer doesn't have the votes to do that right now.

"The issue of the filibuster is in Chuck Schumer's hands and he'll have to explain to voters in his primary electorate why he did or didn't hand control of the Senate over to Republicans like [Minority Leader] Mitch McConnell," Shahid said.

Evan Weber, who's co-founder of the Sunrise Movement, a liberal climate change advocacy group, says if Democrats get nothing done, Schumer's personal political fate will be moot.

"This is what I would say to Chuck Schumer: 'I think if you can't get your agenda done, you're not going to be majority leader anymore,' " Weber said. "I think if we don't deliver this transformational change for the American people right now, it's very hard to imagine a scenario where Democrats maintain control of the House or Senate in 2022."

Illinois Sen. Dick Durbin, the second-highest ranking Senate Democrat, said he believes Schumer knows how to keep the wings of the party together.

"I think he has a good argument to make that his leadership has really served the values of the Democratic Party, including the progressive wing," Durbin said, but he acknowledged this Democratic Congress has a lot to prove. "Now comes the challenge: Can we enact legislation under these circumstances? I hope we can prove with his leadership we can."

An earlier version of this story misspelled Jefrey Pollock's first name as Jeffrey.