Accessibility links
'Black Moses' Lives On: How Marcus Garvey's Vision Still Resonates : Throughline Decades before Dr. Martin Luther King Jr. and Malcolm X, Marcus Garvey attracted millions with a simple, uncompromising message: Black people deserved nothing less than everything, and if that couldn't happen in the United States, they should return to Africa. This week, the seismic influence and complicated legacy of Marcus Garvey. 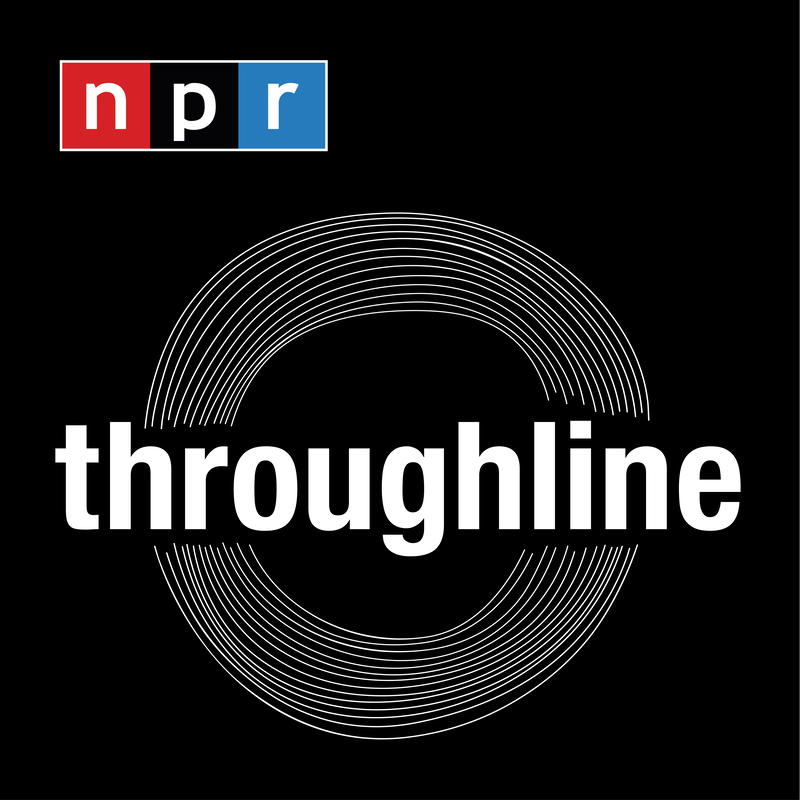 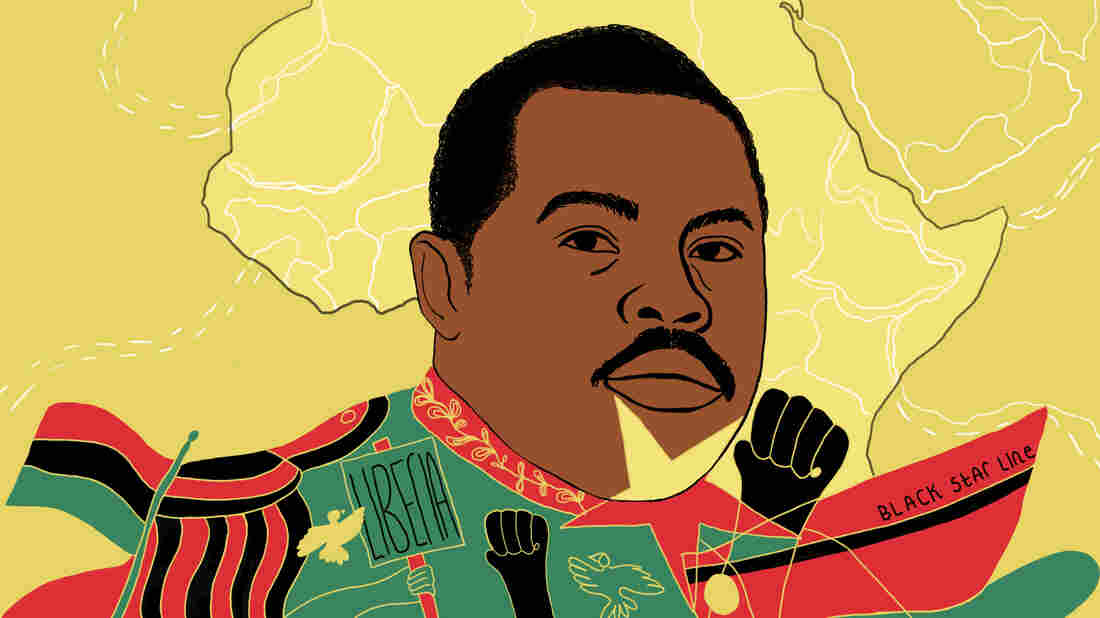 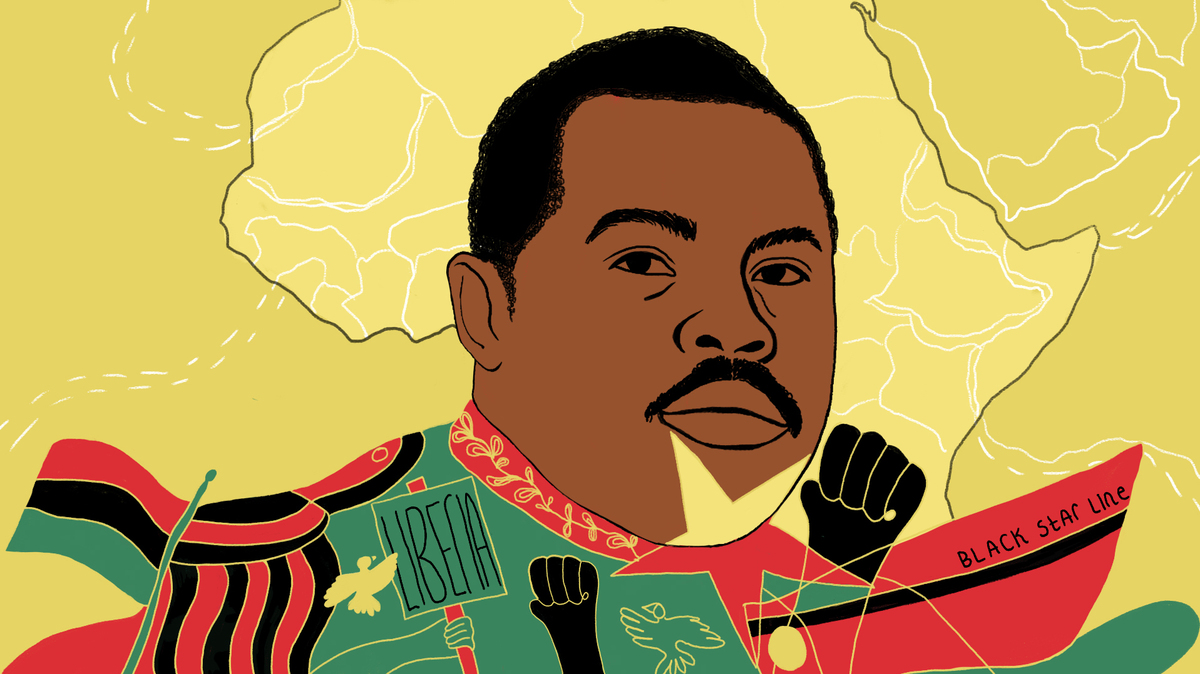 Marcus Garvey may be less familiar to some, but his ideas are all around us. King once described Garvey as "the first man on a mass scale and level to give millions of Negroes a sense of dignity and destiny."

Back in the early 1920s, when Garvey was living in Harlem, the idea of Black nationalism, of unapologetic Black pride, was something whispered, not shouted. It was the Jim Crow era, after all, when white supremacy was the law and notions of white superiority were peddled by scientists in the U.S. and Europe.

But Garvey wasn't content to whisper. He founded an organization called the Universal Negro Improvement Association (UNIA), a fraternal order of Black nationalists. He was often decked out in military garb, wore extravagant hats and gave dramatic, impassioned speeches. He traveled across the United States, and the world, amassing millions of followers. Some even called him "Black Moses." 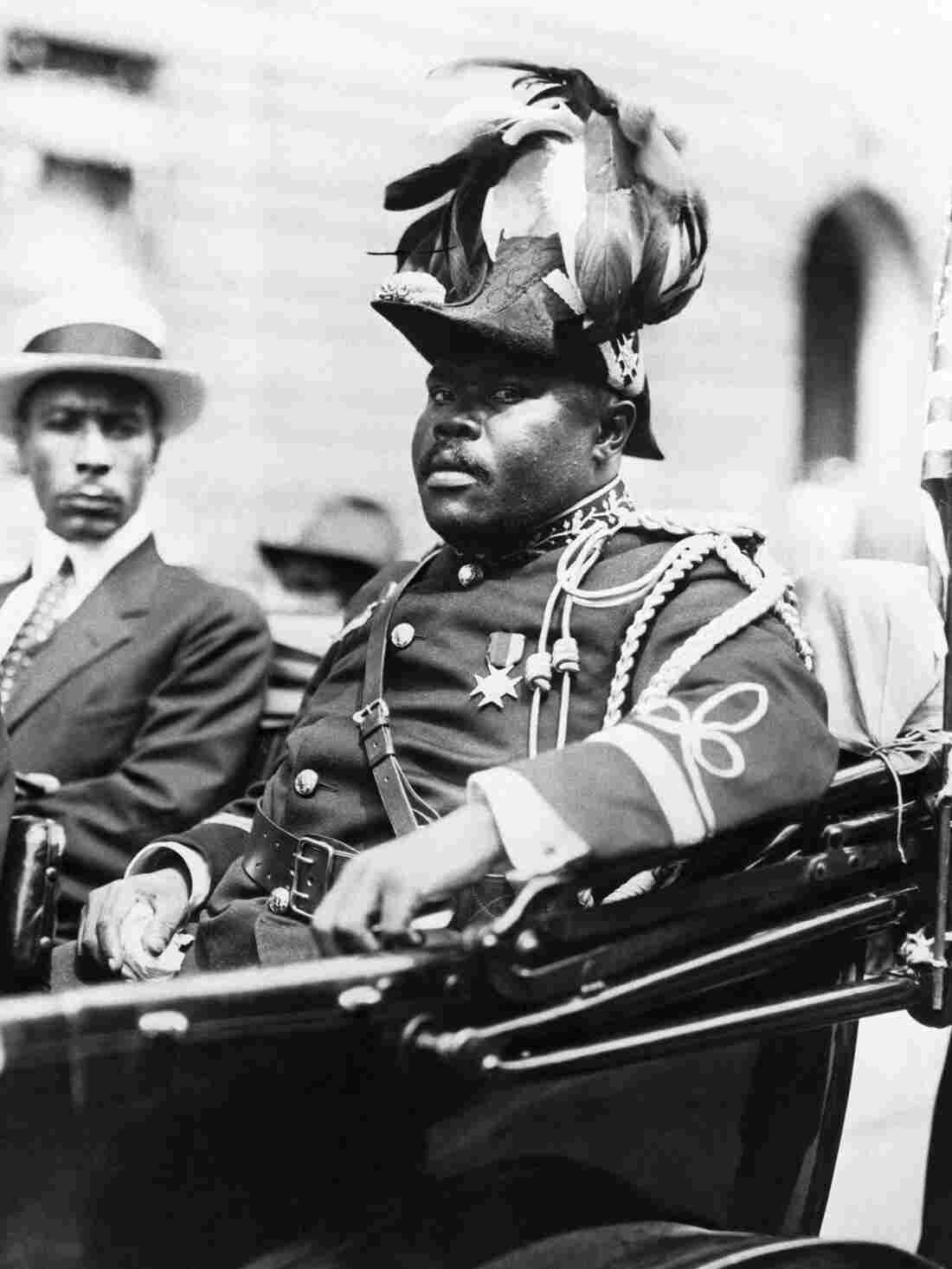 Marcus Garvey, dressed in military garb, is driven around in New York City in 1922. He was a pioneer in celebrating Black nationalism, even in a Jim Crow-divided nation. Bettmann Archive hide caption 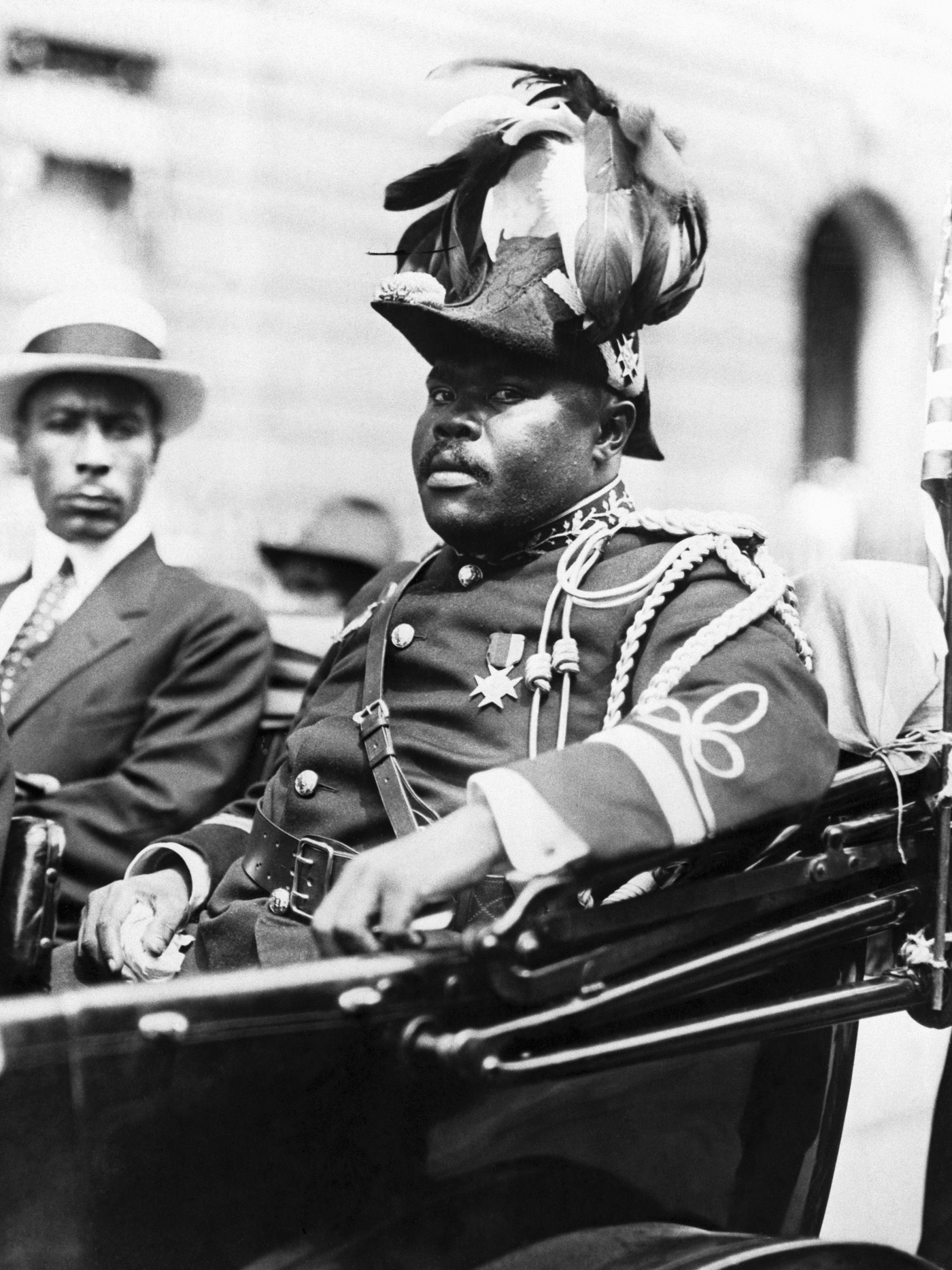 Marcus Garvey, dressed in military garb, is driven around in New York City in 1922. He was a pioneer in celebrating Black nationalism, even in a Jim Crow-divided nation.

In the words of Garvey's biographer, E. David Cronon, the message was clear: "A Black skin is not a badge of shame, but rather a glorious symbol of national greatness."

Garvey laid forth a vision for a new world — a world where all people of African origin, on every continent, were united, self-sufficient and proud. It was the manifestation of an idea known as Pan-Africanism.

Garvey began developing this broad sense of the world at an early age. He was raised in Jamaica, where he lived until his early twenties. Later, he worked for a while as a timekeeper on a banana plantation in Limón, a port town on the Caribbean side of Costa Rica, before heading to London.

This was the heyday of so-called banana republics, which spread throughout Central America, and Limón was ground zero. Massive banana companies essentially controlled the countries where they operated. Almost nothing happened without their permission. And their workers — many of whom were of African descent — were expected to suffer abuse in silence.

Garvey was deeply disturbed by it all. Years later, in 1922, after assuming the role of "Black Moses," he returned to Costa Rica to proselytize his vision. Press reports estimated that nearly 10,000 people showed up to hear Garvey speak.

On a visit to Limón a couple years ago, I found the memory of Garvey alive and well. But as one local historian explained, while some people worship at Garvey's altar, others curse his name. Many of the people in Limón have grandparents who believed in Garvey, and it cost them. 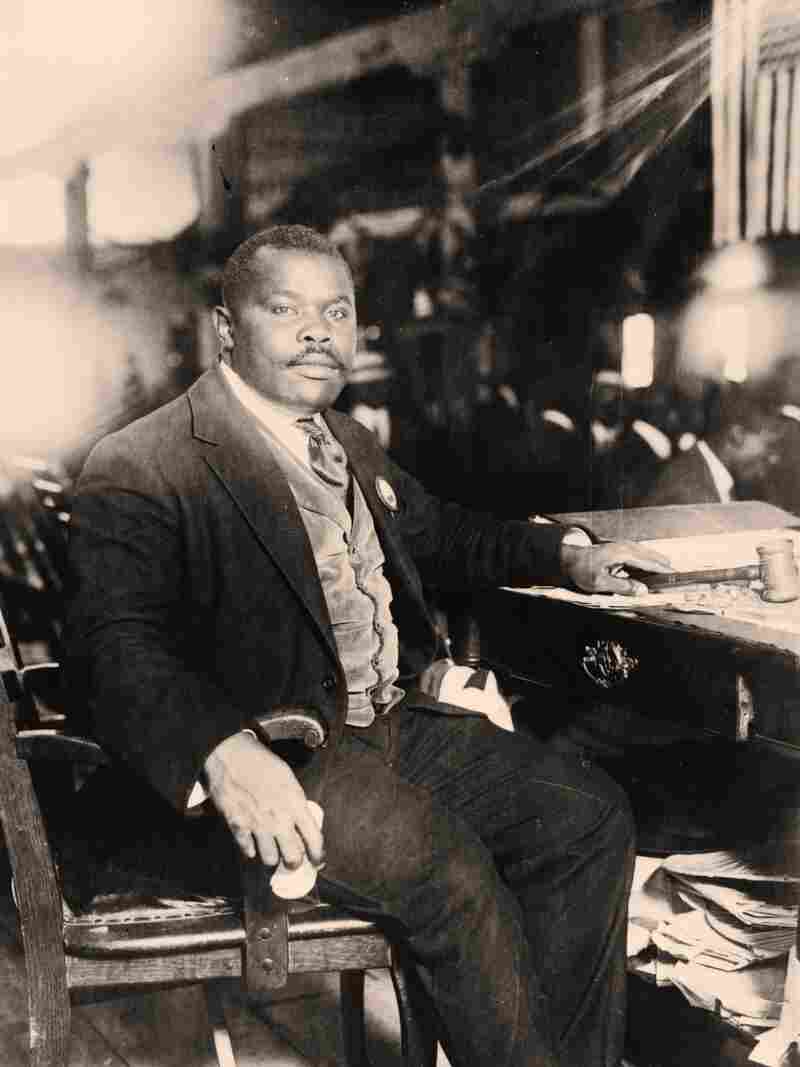 Was Marcus Garvey a charlatan or a prophet? On one hand, his groundbreaking message of Black nationalism continues today. On the other, he was accused of defrauding people, some of their life savings. UniversalImagesGroup/Getty Images hide caption 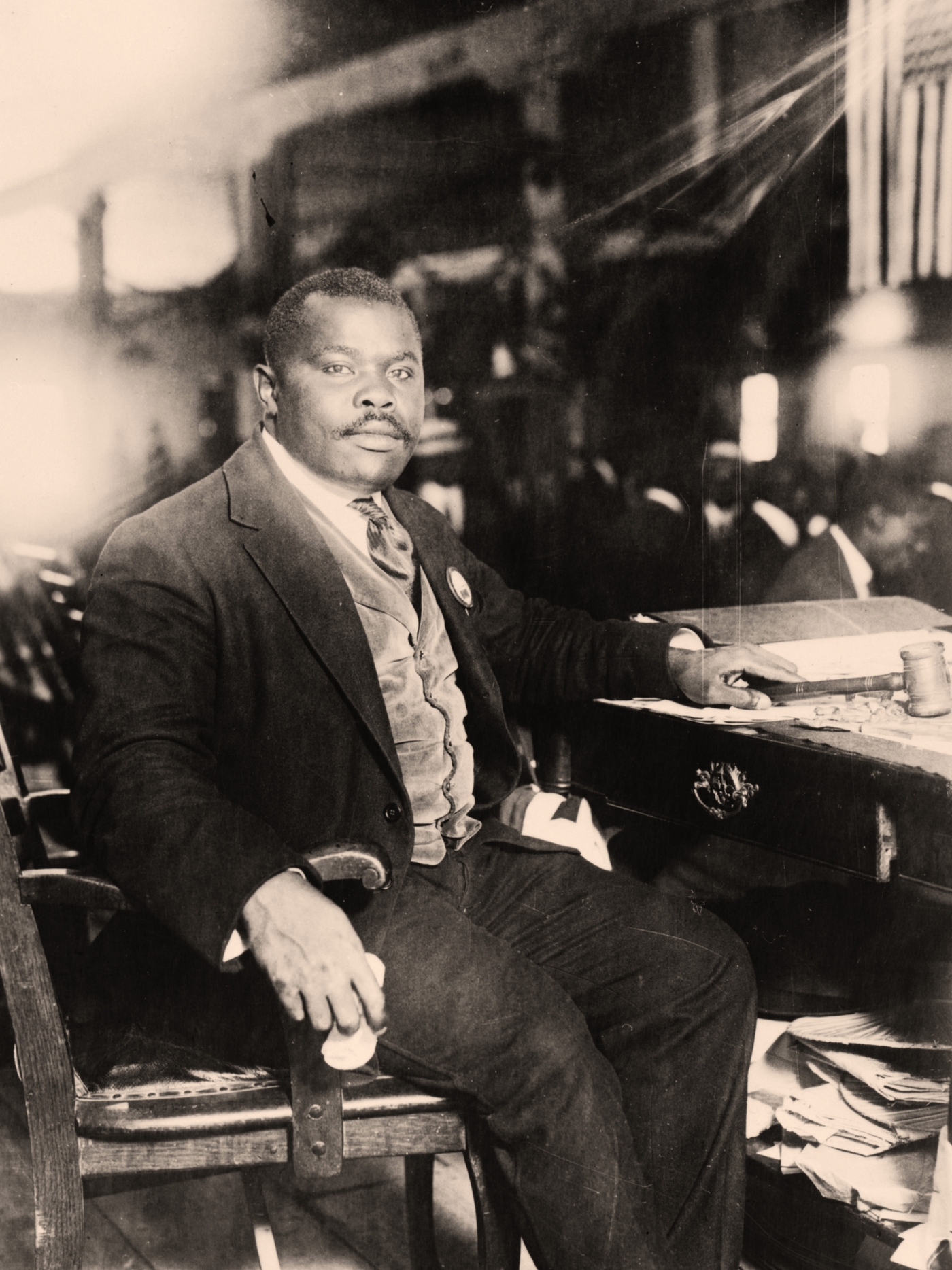 Was Marcus Garvey a charlatan or a prophet? On one hand, his groundbreaking message of Black nationalism continues today. On the other, he was accused of defrauding people, some of their life savings.

Garvey owned a shipping company, the Black Star Line, and he promised some of his followers a spot on one of the boats that he said would take them back to Africa. To a better life. Some turned over their life savings to Garvey. According to one account from G.P. Chittenden, who managed a banana company in Limón, Garvey received a pile of gold notes so high that it reached above his knees.

But the Black Star Line never carried a single passenger across the ocean to Africa. Exactly why remains open for debate. Garvey faced a lot of legal troubles, including charges of tax evasion and mail fraud, and was ultimately deported from the U.S. He died in London in 1940. And for the thousands who bet on Garvey with everything they had, the world did not change, even if the dream remained alive in Garvey's mind.

So what do we make of the man? Was he a charlatan or a prophet?

If I've learned anything while making a history show for the past two years, it's that these questions never have simple answers. We create narratives that make sense from where we sit now. We are each prisoners of our one moment in time, yet we have this deep desire to sit around the figurative campfire and imagine the world both as it was and as it may be. Beyond good and bad, hero and villain, what we really seek are patterns. Answers to questions that reveal essential truths about how humans work.

Maybe the message becomes greater than the messenger. After all, Garvey's ideas inspired Black nationalists of the 1960s like Malcolm X and countless others including Nelson Mandela and Bob Marley.

Maybe that's what Garvey imagined — future generations picking up where he left off. A dream postponed but not forgotten.

Rund Abdelfatah is the co-host and co-producer of Throughline, NPR's history podcast. Subscribe to Throughline to listen to the latest episode on Marcus Garvey, the first in its Black History Month series.

If you would like to read more about Marcus Garvey: