Accessibility links
Town Of Palm Beach Hears Arguments On Trump's Permanent Move To Mar-A-Lago Full-Time "We feel that this issue threatens to make Mar-a-Lago into a permanent beacon for his more rabid, lawless supporters," an attorney for a group opposing Trump's move to the club argued. 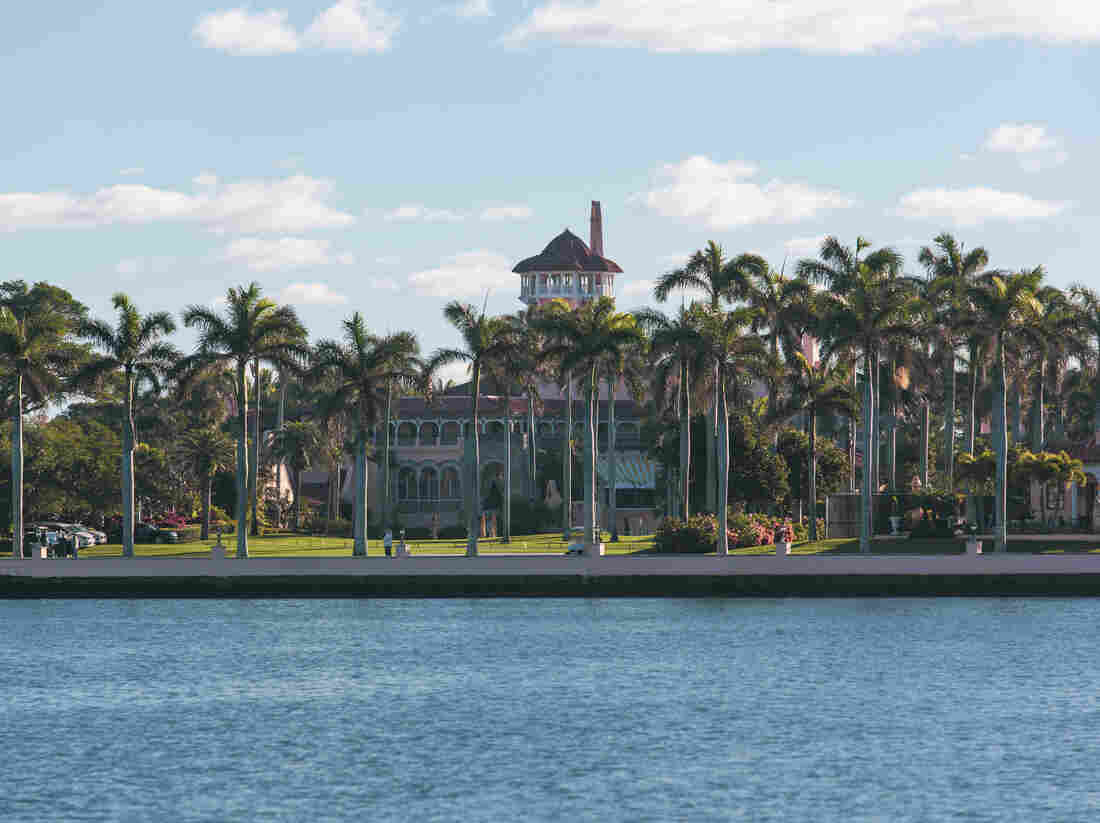 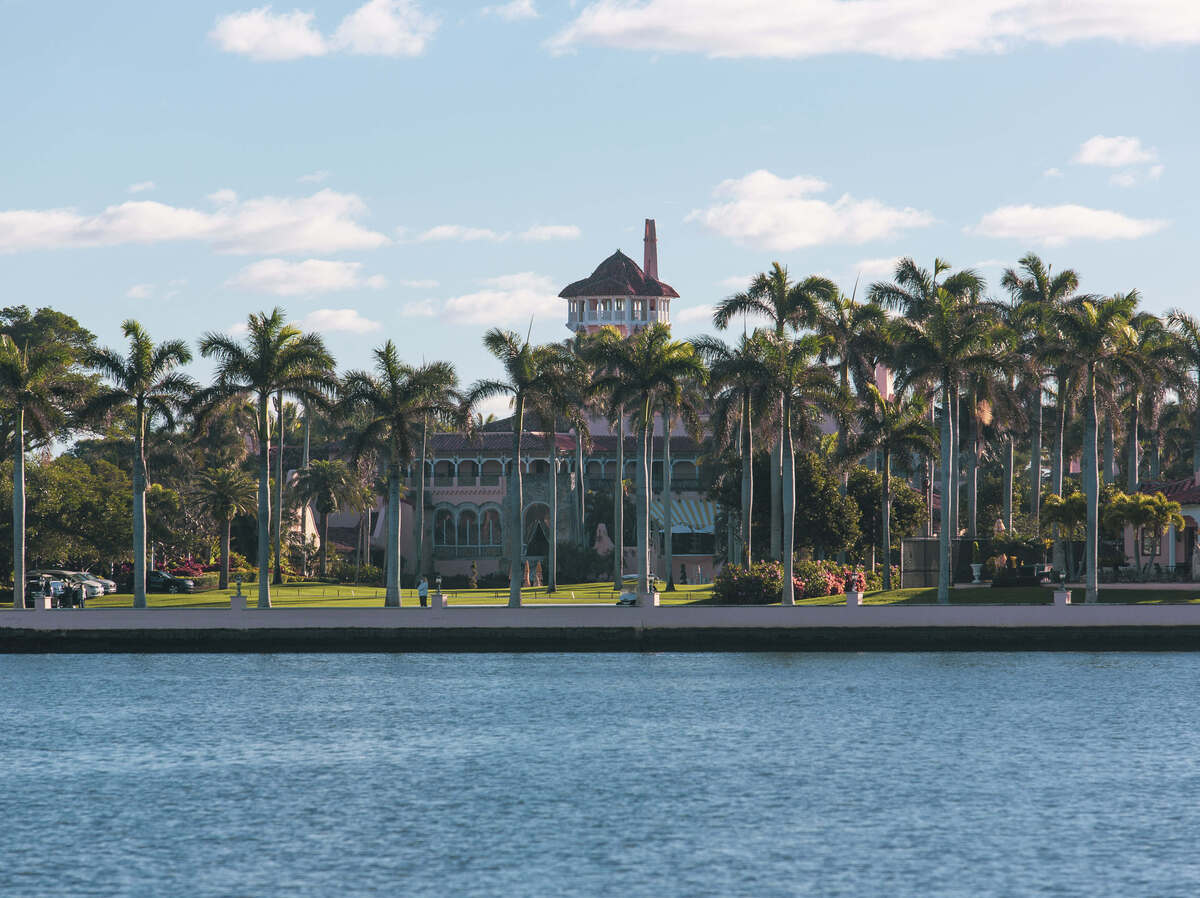 While the U.S. Senate began its second impeachment trial of Donald Trump in Washington, D.C., on Tuesday, local lawmakers in the town of Palm Beach, Fla., also gathered to consider the former president's fate – specifically, whether to let him live full-time at his sprawling private club, Mar-a-Lago.

In a presentation at the council, John Marion, who represents Trump, argued that the former president meets the definition of a "bona fide" employee of the swanky club, and therefore can legally reside there.

"This guy, as he wanders the property, is like the mayor of Mar-a-Lago. He's always present. ... And he loves it there," Marion said in his presentation to the Town Council, which met on Tuesday virtually.

Marion enumerated the various duties, he says, Trump — as president of the club — has taken on since making the resort his permanent home. To hear him tell it, Trump plays a very hands-on role in nearly every aspect of the running of Mar-a-Lago.

According to Marion: "He oversees the property. He evaluates the performance of the employees — he's constantly doing that. He suggests improvements relating to the operation of the club. ... He reviews the clubs financials. He attends events at the club and welcomes the people that are guests. He welcomes and thanks everybody that's attending. He greets members and their guests as he sees them. He recommends the events to be held at the club. He suggests candidates for membership and signs the documentation relating to those members."

Trump's lawyer also assured members of the community that the extensive security measures that followed Trump when he was still in office will no longer be in effect. He said Secret Service staff would be limited to about 10 people and that streets would no longer be closed off to through traffic.

Trump, a long-time resident of New York, legally changed his residency to Florida in 2019 with the intention of living at Mar-a-Lago after leaving the White House.

Trump bought Mar-a-Lago, a 126-room mansion, in the mid-1980s and in 1993 asked for the town's approval to convert it into a private club. The town agreed, with a stipulation that members of the club could not reside there for longer than three weeks each year.

Trump has flouted that rule on a number of occasions and in the 20 days since leaving the White House, he has resided at Mar-a-Lago.

Objections to the former president's full-time residency at the club were presented by neighbors, with whom Trump has had a number of disputes in the past. Before Trump became president, he had gotten on the wrong side of Palm Beach officials by installing a giant flag pole at the club that exceeded local height limits. During his presidency, neighbors reportedly complained about traffic and blocked streets caused by Trump's frequent trips to Mar-a-Lago.

An attorney representing at least one of the club's neighbors expressed concern about a security barrier installed there that uses microwaves and may "cause permanent brain trauma and other debilitating injuries."

On Tuesday, Reginald Stambaugh told the Council that many of his clients had purchased their properties with the understanding that no club members would permanently reside at the site.

"This agreement assured my clients they would be able to live peacefully and enjoy the privacy afforded others on the island," Stambaugh said.

Another attorney representing a group calling itself Preserve Palm Beach, expressed similar concerns over declining quality of life. "We feel that this issue threatens to make Mar-a-Lago into a permanent beacon for his more rabid, lawless supporters."

In an earlier memo to Palm Beach Mayor Gail Coniglio and the Town Council, the town's attorney, John Randolph, argued that Trump qualified as a bona fide employee of Mar-a-Lago and advised city officials that they should hear from "all interested parties including, but not limited to, the neighbors to Mar-a-Lago" before making a final decision.

In December, an attorney representing at least one of the neighbors of the club sent a letter asking town officials to enforce the 1993 agreement.

"As everyone knows, President Trump is already in violation of the Use Agreement by using Mar a Lago in excess of the allotted time. This violation (as well as others on record) will continue without Town intervention," it said.

It added that security concerns were of "paramount importance, including issues associated with a microwave fence which is known to cause permanent brain trauma and other debilitating injuries. My client exhibits symptoms of exposure," the letter from the attorney said.

The letter added that "significant devaluation of neighboring properties due to the Use Agreement violations" were also a concern.

"Palm Beach has many lovely estates for sale and surely he can find one which meets his needs," it said of the former president.

The Council has postponed all actions related to the matter until April.

An earlier version of this story incorrectly attributed several quotes to Palm Beach Town Attorney John Randolph. The quotes should have been attributed to John Marion, the attorney representing former President Donald Trump.