Accessibility links
Capitol Riot Prompts A Reckoning Over Extremism In The Ranks The deadly riot at the Capitol on Jan. 6 has forced military leadership to confront the threat of domestic extremism. Rioters that day included current and former service members. 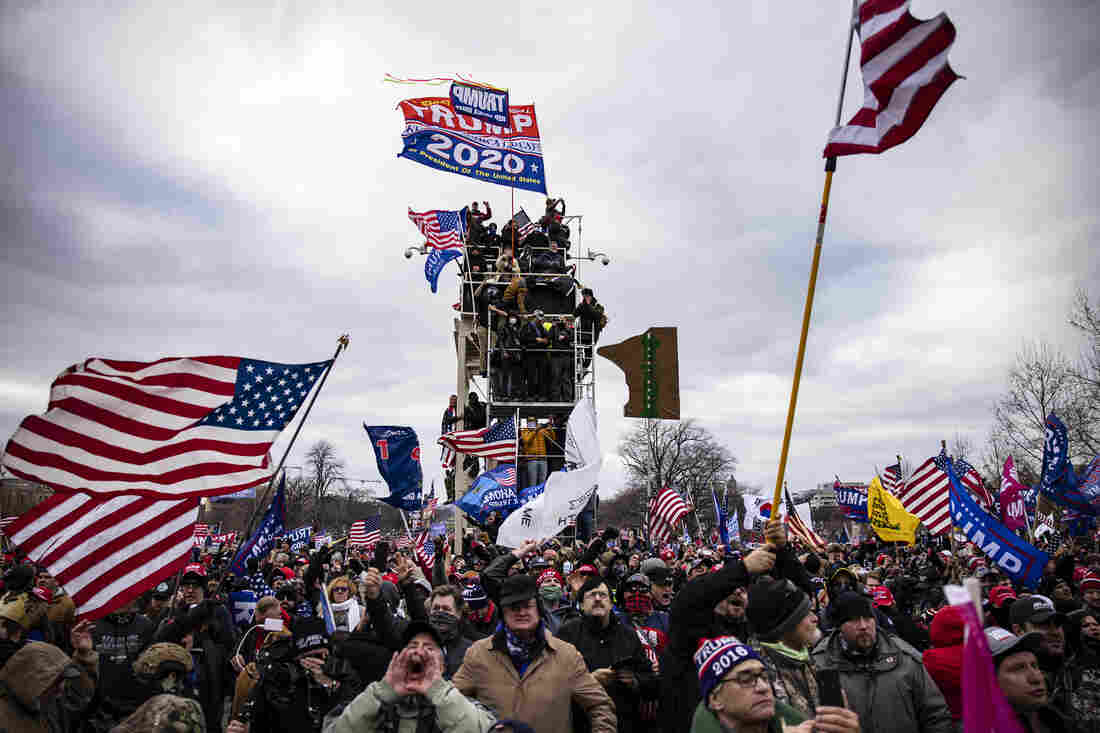 Pro-Trump supporters storm the U.S. Capitol following a rally on Jan. 6. So far, military veterans account for about 15% of those criminally charged in the Capitol riot, according to an NPR analysis. Samuel Corum/Getty Images hide caption 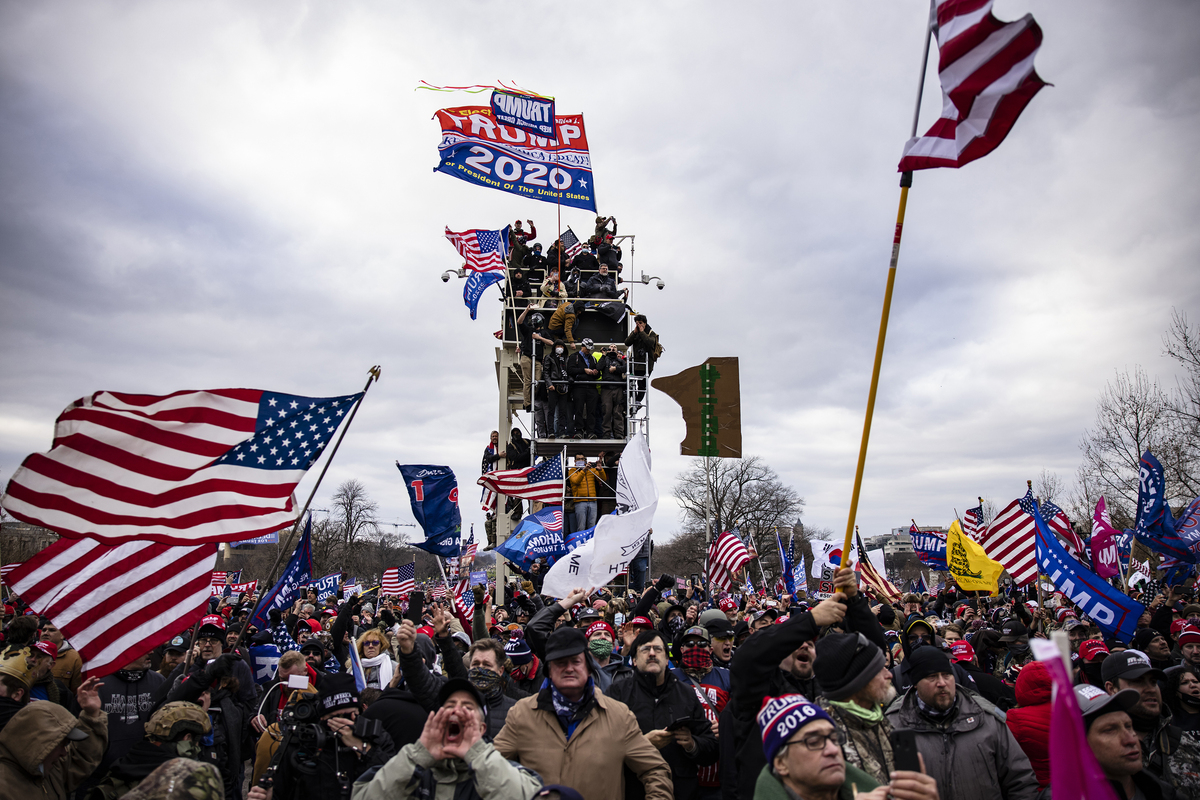 Pro-Trump supporters storm the U.S. Capitol following a rally on Jan. 6. So far, military veterans account for about 15% of those criminally charged in the Capitol riot, according to an NPR analysis.

Less than two weeks after hundreds of rioters — including current and former service members — converged on the Capitol and broke through the doors, threatened lawmakers and injured and killed police, retired Army Gen. Lloyd Austin appeared before a Senate committee for his confirmation hearing.

"The job of the Department of Defense is to keep America safe from our enemies," he told members of the Armed Services Committee. "But we can't do that if some of those enemies lie within our own ranks."

So far, military veterans account for about 15% of those criminally charged in the Capitol riot, according to an NPR analysis. Some rioters carried Marine Corps flags. Others dressed as soldiers, while at least one member of the far-right group The Proud Boys told an NPR reporter that he served two tours in Iraq with the 82nd Airborne Division. Historical data has shown a link between military experience and right-wing extremism, and military experience is a prized asset in extremist circles.

Now Defense Secretary Austin has ordered a military-wide, one-day training "stand down" to determine the extent of extremist behavior in the ranks.

At some point in the next two months, Austin wants military leaders to discuss with the troops the importance of their oath of office to support and defend the Constitution, to be aware of any unacceptable behaviors such as advocating violence or active participation in hate or white supremacist groups, and talk about ways to report suspected behavior. Also, he said he wants these discussions to consider possible solutions.

For decades military leaders have dealt with extremists in the ranks, from "skinheads" and neo-Nazis to gangs like MS-13. The senior officers have often said only a tiny fraction of the 2 million men and women in uniform hold these beliefs. But there's a new urgency following the nationwide rise of far-right groups in recent years. Former President Donald Trump at times seemed to support such groups, while some Republican members of Congress appeared to embrace extremist beliefs.

Austin says he's trying to determine the scope, and as he said, "sustainable ways" to eliminate it.

Navy leadership revealed that within just the past few weeks there have been separate incidents where "symbols of hate' were left anonymously in living areas aboard two ships. In one instance an African-American sailor found a noose next to his rack; in another, graffiti on a bathroom wall read, "Nazi life."

Military leaders are still trying to gather statistics from the services that would shed light on the issue, including how many military members are disciplined, how many are kicked out of the military and how many recruits are turned away from any extremist ties.

It's proving to be difficult. So far, NPR and other news organizations have been able to gather only a few statistics. The Marine Corps says in the last three years it found 16 cases of substantiated extremist behavior, mostly postings on social media. The Marines had no immediate information about whether any of them were kicked out.

The Army, meanwhile, told NPR to file a Freedom of Information Act request with the Army's Criminal Investigation Command in order to get any information on extremist investigations.

It's unclear whether the military has carried out any surveys like the one conducted in 2019 by the independent Military Times newspaper.

Roughly one-third of active duty troops said they had "personally witnessed examples of white nationalism or ideological-driven racism within the ranks in recent months," according to the survey by the Military Times and Syracuse University's Institute for Veterans and Military Families. Troops said they had seen "swastikas being drawn on service members' cars, tattoos affiliated with white supremacist groups, stickers supporting the Ku Klux Klan and Nazi-style salutes between individuals."

Some conservative commentators have questioned whether Austin's stand down is an anti-Trump exercise. But the Pentagon insists this is not about how a current or former service member voted, or what their political beliefs may be. Rather, it's how they act on certain beliefs, including calls for violence.

Pentagon regulations from 2012, state that: "Military personnel must not actively advocate supremacist, extremist or criminal gang doctrine, ideology or causes, including those that advance, encourage or advocate the use of force, violence, or criminal activity or otherwise advance efforts to to deprive individuals of their civil rights."

The regulations go on to say that military personnel "must reject active participation" in such groups, including "demonstrating and rallying; recruiting, training, organizing, or leading members; distributing material (including posting online); knowingly wearing gang colors or clothing; having tattoos or body markings associated with such gangs or organizations."

Still, a service member can be a member of an organization such as the Proud Boys, just not an "active" one. That may be changing, says Pentagon spokesman John Kirby.

"Membership is not considered inconsistent with service in the military," Kirby told reporters recently, "and it really is about what you do with that membership. I'm not going to be predictive one way or the other about where this discussion is going, but I think membership in these groups is something I would expect [Pentagon officials] to look at."

Pentagon officials privately concede they will have to tackle some thorny issues. Confederate flags are now banned. But what about a patch from a far-right group or a bumper sticker that supports the conspiracy theories of QAnon?

Indeed, what about soldier wearing a T-shirt reading, "Stop the Steal?" The argument could be made that that solider is saying the election was a fraud and therefore his commander-in-chief is illegitimate. That could be illegal under military law, which prohibits "contempt toward officials."

Austin sat down with the Joint Chiefs of Staff last week and asked for their ideas. Some suggested an education campaign for recruits that talks about extremism. Another idea is to counsel service members before they leave active duty: Be aware extremist groups may be looking to recruit you.