Accessibility links
Forget Ride Hailing. Uber Wants To Be Your One-Stop Shop For Everything During the pandemic, Uber has doubled-down on delivery services while its ride-hailing business plummeted. The strategy appears to be working so well it could outlast the health crisis. 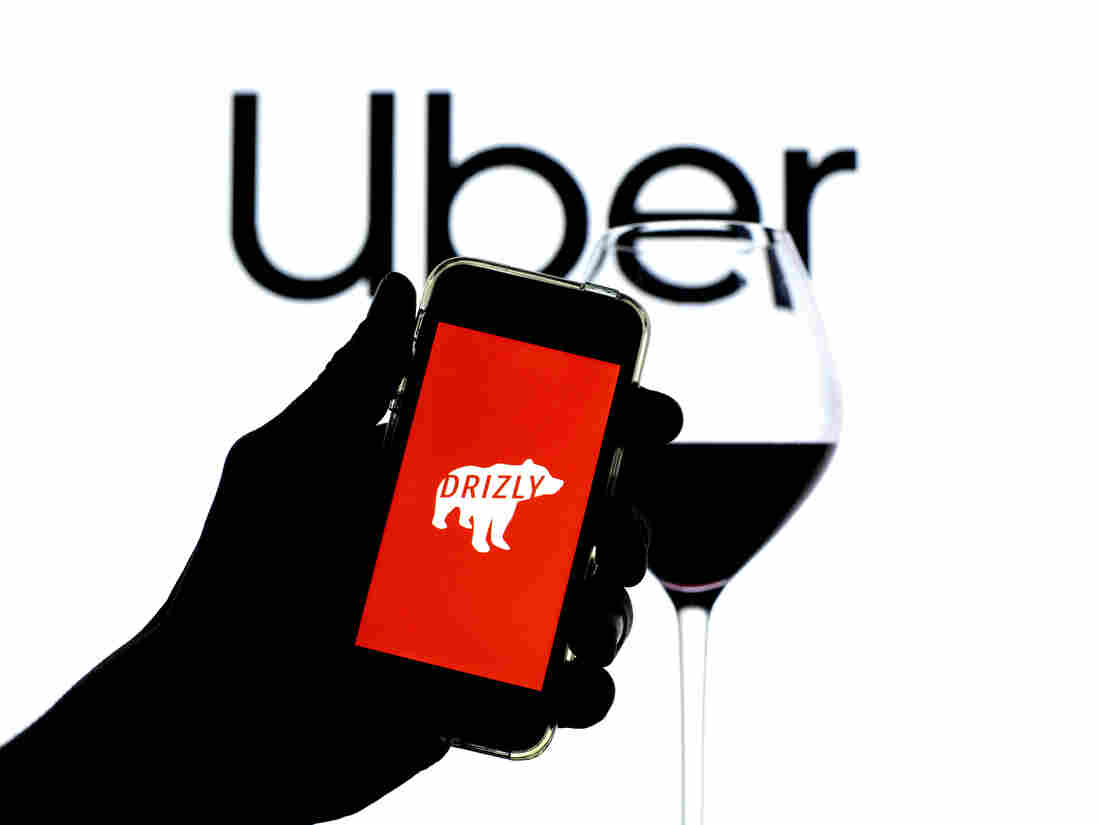 Uber acquired Drizly, an alcohol e-commerce platform, for $1.1 billion in cash and stock last week. It's just the latest brand Uber has added to its portfolio as the company seeks to satisfy consumer appetites. Thiago Prudêncio/Thiago Prudêncio/Getty Images hide caption

Uber is no longer synonymous with ride-hailing. These days, it has more to offer.

Want groceries delivered? Uber acquired a majority stake in Cornershop, its answer to Instacart, in 2019. Craving restaurant food? Uber Eats has you covered after snatching up Postmates in 2020. Now, the company can bring a six-pack of beer to your doorstep with Drizly, a Boston-based alcohol delivery platform that Uber bought last week for $1.1 billion in cash and stock.

This past year was an inflection point for Uber. Its core ride-hailing business floundered in the pandemic, as people avoided sharing tight quarters with strangers. Bookings were down 75% year-over-year in the second quarter and 53% in the third.

So it was reasonable to think Uber's business model may have passed the point of recovery, Wedbush analyst Daniel Ives said. Instead, the company doubled down on delivering things, rather than people. And in doing so, he projects, Uber's growth accelerated by three or four years. He thinks that trajectory is what investors will be watching for when Uber reports fourth quarter earnings on Wednesday afternoon.

"It speaks to a company that really transformed during a pandemic that's been devastating for ridesharing — that could have been a backbreaker," Ives says. "Instead, I'd argue they're actually stronger coming out of the pandemic than they were going in."

Within a year of cost-cutting in other areas of the business like e-bikes and self-driving cars, Uber's acquisitions are strategic. The company is cornering the take-out, grocery, and alcohol markets to maximize a key ingredient to any app's success: frequency of use.

Taking a page from Amazon's playbook

Gig economy companies like Uber, DoorDash and Instacart are competing for customers on an order-by-order basis. By offering a variety of products under the Uber umbrella, the company aims to retain its customers and incentivize them to use the Uber app, rather than an alternative brand, on a weekly or even daily basis through subscriptions, according to Deutsche Bank analyst Lloyd Walmsley.

"If they can fold those into a single subscription, where you get a discount for a subscription fee, then all of a sudden they've got a very sticky product and users coming back again and again, which is similar to the Amazon playbook with Prime," Walmsley says.

He expects Uber's delivery services could become the biggest portion of its business — even after the pandemic, when people feel comfortable hailing rides again.

These acquisitions can be good news for Uber drivers, too.

"It is a net positive for drivers because it does open up more opportunities. As a driver, you have to have more flexibility," said Harry Campbell, the founder of The Rideshare Guy, a blog for Uber and Lyft drivers.

Now that Drizly has joined the Uber family, that should open the door to more lucrative trips for drivers. Deliveries of alcohol, like groceries, typically reap higher margins than dropping off food from Chipotle, for example.

But higher margins might not be enough to tempt some drivers to accept alcohol-delivery requests. Chicago-based Uber driver Kevin Harvey delivered alcohol a few times through Uber last summer, even before the Drizly acquisition. But those trips were so stressful, he decided to opt out of booze deliveries altogether.

Harvey sees delivering alcohol as a major liability. At bars, he notes, bartenders are expected to use their judgment when it comes to serving patrons. If a customer has had too much to drink, there are bouncers there to keep people safe.

But, he says, as a driver, it's unsettling to stand on a porch with a potentially intoxicated or underaged customer, and decide whether to give them the alcohol they've paid for.

"I'll go as far as to call it wildly unsafe," he says. "I understand at the end of the day, business is business. I get the implications of having to drive revenue and margins. But at what risk?"

In response to those concerns, Uber noted it had put age-verification technology in place for people trying to buy alcohol.