Accessibility links
Supreme Court Stays Execution Of Alabama Inmate Who Requested Pastor's Presence Willie B. Smith III's death by lethal injection in an Alabama prison is on hold after the U.S. Supreme Court ordered state officials to allow him to have his pastor with him when he dies. 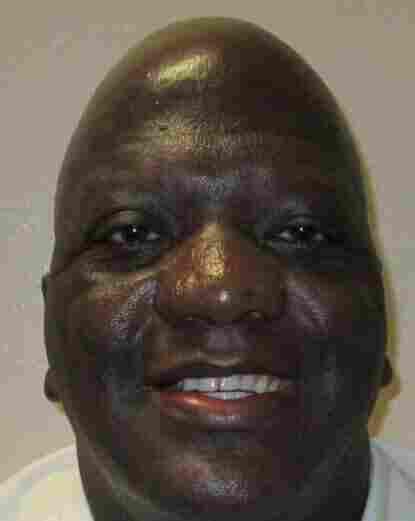 Willie B. Smith is on death row for his conviction in the 1991 abduction, robbery, and murder of 22-year-old Sharma Ruth Johnson. Alabama Department of Corrections hide caption

The U.S. Supreme Court blocked the planned execution of an Alabama death row inmate late Thursday night, after justices upheld a lower court's ruling requiring Willie B. Smith III's personal pastor to be in the chamber with him when he was given the lethal injection.

The decision came down the same night Smith was originally scheduled to be put to death inside of the William C. Holman Correctional Facility.

In the ruling, Justice Elena Kagan wrote that Alabama's Department of Correction's policy barring clergy members from the execution chamber over security concerns is a burden on Smith's religious liberties. She said his request is protected under the Religious Land Use and Institutionalized Persons Act.

"Alabama acknowledges that Smith's request is 'based on a religious belief and not some other motivation,'" Kagan wrote. "So Alabama's policy must withstand strict scrutiny. And it cannot."

Justices Brett Kavanaugh and John Roberts wrote the dissenting opinion. The vote count was not listed.

Smith's attorneys had also requested a stop to his execution over claims the state failed to give the man, who they say has a below average IQ, proper assistance completing the forms affecting his execution.

While the appellate court issued a temporary stay Wednesday night for judges to review Smith's claims under the Americans With Disabilities Act, the Supreme Court vacated that order Thursday night.

Smith was convicted for the 1991 abduction, robbery, and murder of Sharma Ruth Johnson, who was 22 at the time.

Prosecutors said Smith kidnapped Johnson at gunpoint from an ATM, stole her money, and then took her to a cemetery where he shot her in the back of the head.

State officials denied Smith's request for his pastor citing security concerns and a policy banning non-prison officials from being in the room. In 2019, the state changed its rules so that no religious officials would be allowed in.

The state attorney general's office said in court documents that Smith's pastor could witness the execution in an adjoining room.

Attorneys for Smith maintained this still violated his religious liberties.

The Supreme Court justices have grappled with the same legal question at the core of the Smith case in the last two years, but have ruled very differently in each situation.

In 2019, the Supreme Court, by a 5-4 vote, ruled that Alabama could execute Domineque Hakim Ray, a Muslim man convicted of murder.

The appellate court had temporarily blocked the execution because the state barred the man from having a Muslim imam at his side in the death chamber. Alabama said only the prison's Christian minister would be allowed in.

A month later, in a 7-2 vote, the justices granted an eleventh-hour stay of execution to Patrick Henry Murphy, a Buddhist prisoner in Texas who had been denied a Buddhist religious adviser at his side in the death chamber.

The difference between the two cases, according to the conservative court majority, was that the Muslim prisoner waited too long to ask for an imam.

It's unclear what the state of Alabama's next move will be in the Smith case.