Accessibility links
Opinion: Pursuing Diplomacy With Iran Doesn't Mean Ignoring Its Bad Behavior Arab and U.S. liberals differ on how to handle Iran and its proxies, writes Firas Maksad. He says reactions to the killing of his friend Lokman Slim, a critic of Hezbollah, are a case in point. 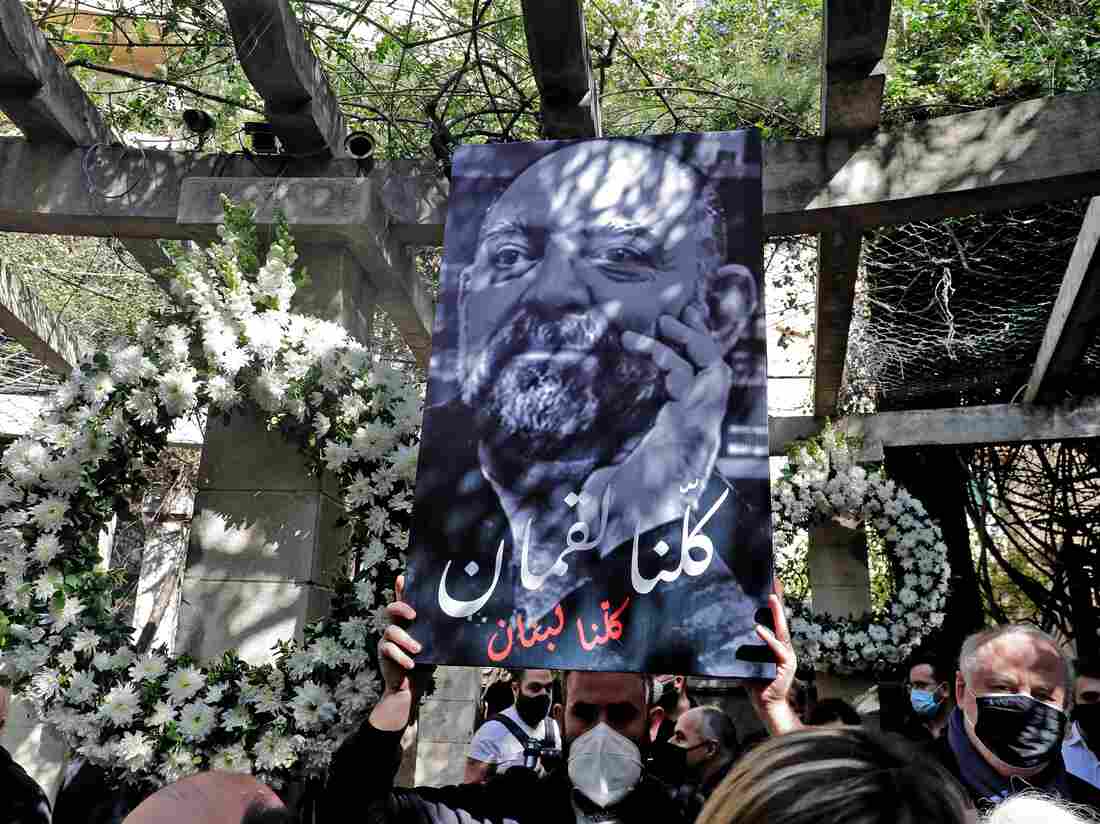 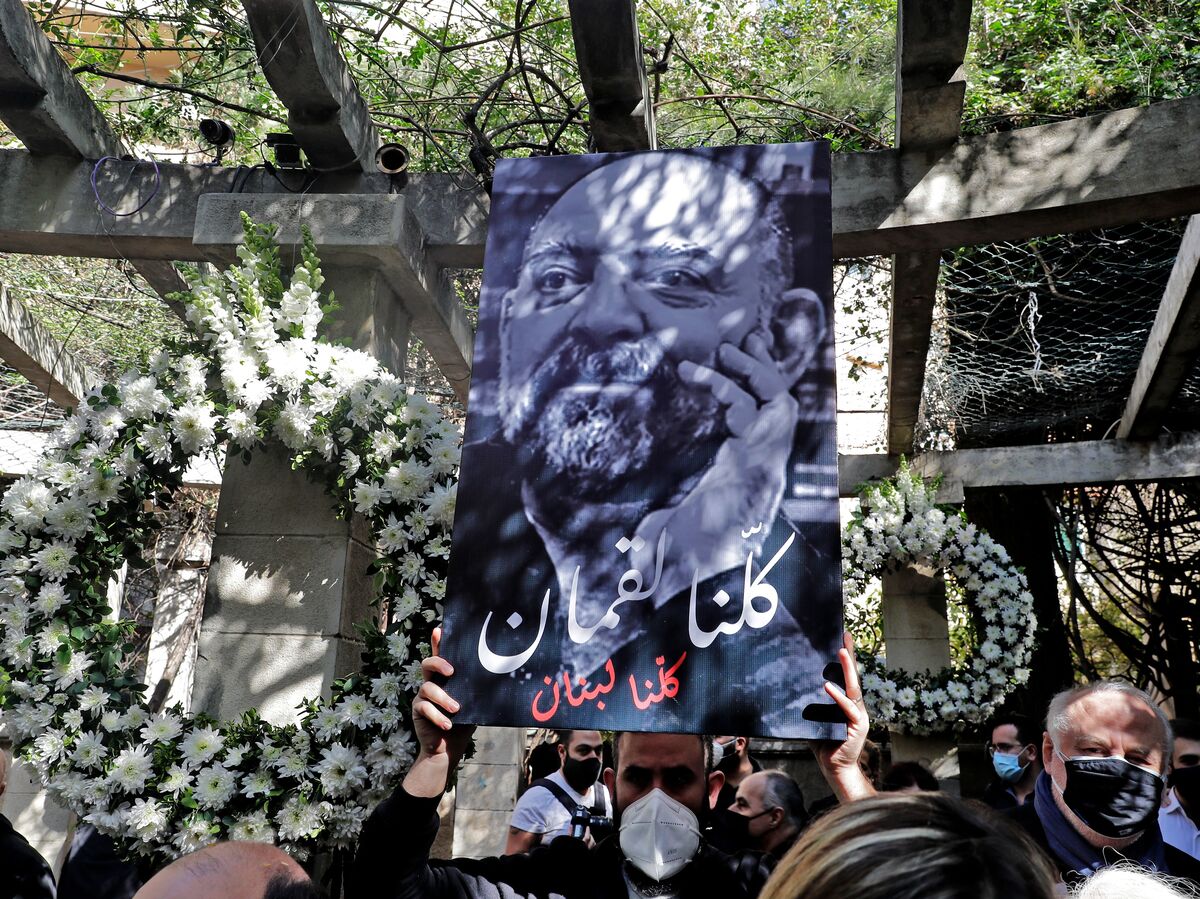 Friends and family members of slain prominent Lebanese activist and intellectual Lokman Slim (shown in the raised image), attend a memorial ceremony in the garden of the family residence in the capital Beirut's southern suburbs, a week after he was found dead in his car, on Feb. 11. Slim, 58, was an outspoken critic of Hezbollah.

A mix of grief and defiance permeated through the crowd that gathered in the southern suburbs of Beirut last week to bid final farewell to Lokman Slim, a friend who was widely recognized for being a sharp critic of Hezbollah. He worked on a range of issues that put him at odds with the Iran-backed militants, including LGBTQ rights, women's rights, justice for political prisoners in neighboring Syria and opposition to Iranian regional hegemony. Slim's body was found dead on Feb. 4, in an area under Hezbollah control, with bullets in his head and chest. He was 58 years old.

Among those present at his funeral were the United States ambassador to Lebanon and representatives of numerous European countries. The diplomats used robust language in their condemnation of the killing, but one word remained unuttered, that of the most likely culprit: Hezbollah.

Hezbollah — a Lebanese Shiite movement with a powerful militia and parliamentary representation — is widely considered a proxy force of Iran. It officially condemned Slim's killing and called for an investigation; although its leader's son tweeted joyfully after the body was found, with a "no regrets" hashtag, before deleting it. Many Lebanese, including those of us who were close to Slim, suspect Hezbollah's involvement in the assassination.

A statement issued by U.S. Secretary of State Antony Blinken described Slim as "a prominent Lebanese activist ... who pushed for justice, accountability and the rule of law." To the amazement of Arab liberals who share American democratic values, the words "Iran" and "Hezbollah" were curiously missing.

While it's understandable that U.S. officials would not want to jump to conclusions, it is surprising that Slim's extensive track record of vocally opposing Iran was left unmentioned. An international tribunal last year found Hezbollah members to be responsible for the killing of Lebanon's former Prime Minister Rafik Hariri and others who oppose it.

In the wake of this and numerous other killings targeting progressives from Iraq to Lebanon, and Syria to Yemen, men and women regularly threatened by Iran-sponsored militias are asking themselves: Is this what the Biden administration's engagement with Iran sounds like? Will we be abandoned as sacrificial lambs at the altar of nuclear diplomacy?

Rather than reassure their intended audiences, such statements ring hollow among Arabs who are risking their lives in defense of liberty and livelihood. They only accentuate fears that America, now with Democrats back in the White House, will once again go soft on Iran.

It is both counterintuitive and unfortunate that Arab liberals who share with Americans a thirst for liberty, justice and equality have been driven to view them with such suspicion. This is certainly not for any love lost toward former President Donald Trump, or for the regime-change policies of the previous Republican president, George W. Bush.

Biden should de-link nuclear negations from regional issues, allowing himself the flexibility to punish Iran and its allies for their nefarious activities without jeopardizing the talks.

Rather it is the product of policies pursued by recent Democratic administrations, particularly of former President Barack Obama. Those policies ignored the plight of millions of Syrians who were attacked by their Iranian-backed government using chemical weapons and barrel bombs. Back then, Obama failed to enforce his own red line against the use of such weapons, in part preferring not to jeopardize nuclear negotiations with Tehran. Iran and its Syrian ally, with significant help from Hezbollah shock troopers, went on to crush the uprising.

And lest anyone think that it is only Arabs who feel abandoned, Iranians opposed to the governing clerical regime remain bitter about President Obama's lack of support for their peaceful popular uprising during the "Green Revolution" of 2009. At the time, many liberal American policymakers and academics argued that U.S. support would delegitimize the protesters by allowing the regime to paint them as foreign-inspired traitors. But Iranians saw things for what they were, namely that Washington was more interested in striking deals with their oppressive government than coming to their aid.

Democrats would do well to acknowledge these dark realities of their Iran policy rather than trying to deflect criticism, shifting the conversation toward the unpopular proposition of deterring Iran only to the benefit of rich Arab Gulf states. The Iran debate should emphasis the people of the region, people like Slim, risking their lives for their freedoms.

Moreover, having to decide between diplomacy and standing up to Iranian-sponsored violence is a false proposition. The Biden administration can, in fact, engage Tehran while remaining true to those who share its values, and to allies who share its interests.

Iranian Foreign Minister Mohammad Javad Zarif routinely stresses that talks on the nuclear program are completely separate from any discussion about his country's regional activities. Those, he contends, are to remain off the table. It is a not-too-subtle rebuttal of the "calm-for-calm" proposition some in the U.S. administration have suggested in the hope of a broader détente.

President Biden should take Iran up on its offer. He should de-link nuclear negations from regional issues, allowing himself the flexibility to punish Iran and its allies for their nefarious activities without jeopardizing the talks. What's more, if Hezbollah is established to have killed Slim, the president should apply the Magnitsky Act for human rights violations against Slim's killers, as Republican and Democratic members of the House Foreign Affairs Committee have urged him to do. Its sanctions apply globally and would be more potent than most terrorism-based designations.

Such an approach, carried out through targeted sanctions and forceful (yet sincere) diplomacy, would begin to restore faith in lacking U.S. deterrence. It would also be a welcome break from the Obama-era policy so widely detested in the region.

America is always at its best when its policies advance both its interests and its values. And when it comes to Iran, de-linking the nuclear from the regional would help shore up America's geopolitical and moral standing.

Tom Malinowski, the Democratic vice chair of the House Foreign Affairs Committee and a respected progressive, gets it. He is clear about supporting the administration's diplomacy on nuclear issues while also pressing the government not to drop the ball on Iran's other provocations.

President Biden and fellow Democrats should take the congressman's advice and not shy away from calling Iran out, by name, for its malign activities. Perhaps then Arab liberals will be less suspicious of their American counterparts. Perhaps then Slim's now popular slogan of "zero fear" in the fight for freedom from Iranian-sponsored militias will stand a better chance.