Accessibility links
Biden Tries To Rein In ICE: New Rules Limit Who Immigration Agents Target for Arrest After four years of stepped-up enforcement, the Biden administration is announcing new guidelines that sharply limit who can be arrested and deported by Immigration and Customs Enforcement agents. 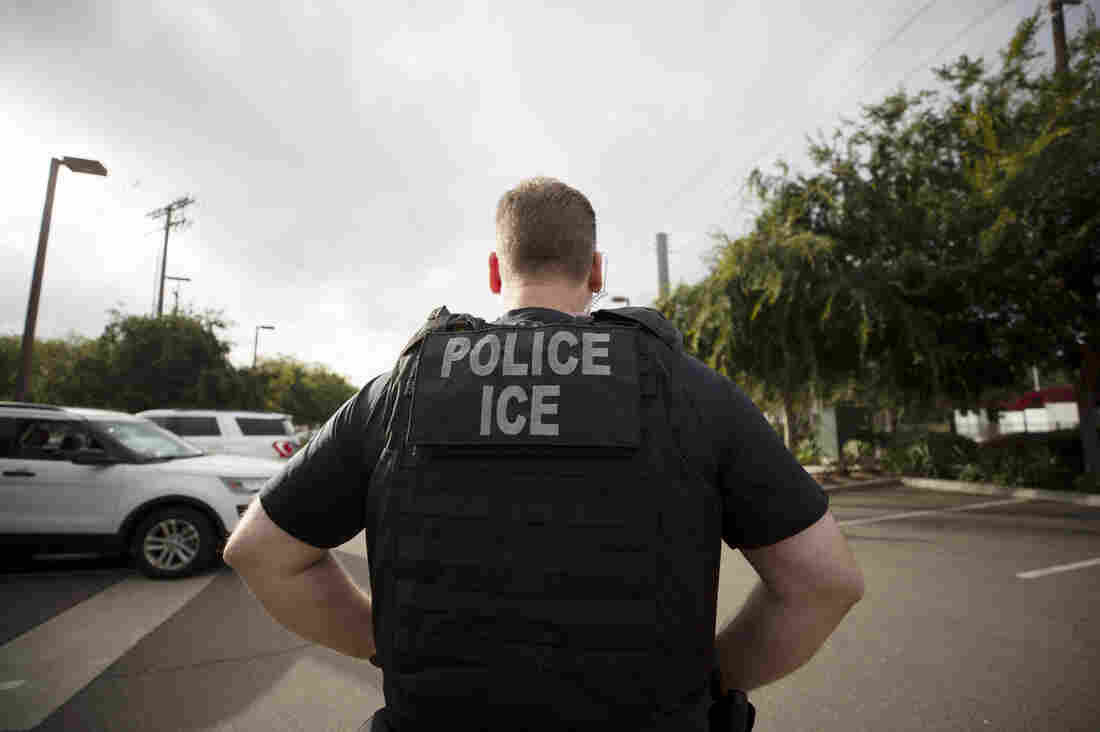 A U.S. Immigration and Customs Enforcement officer looks on during an operation in Escondido, Calif., in 2019. The Biden administration today announced new guidelines that are expected to sharply limit arrests and deportations carried out by ICE. Gregory Bull/AP hide caption 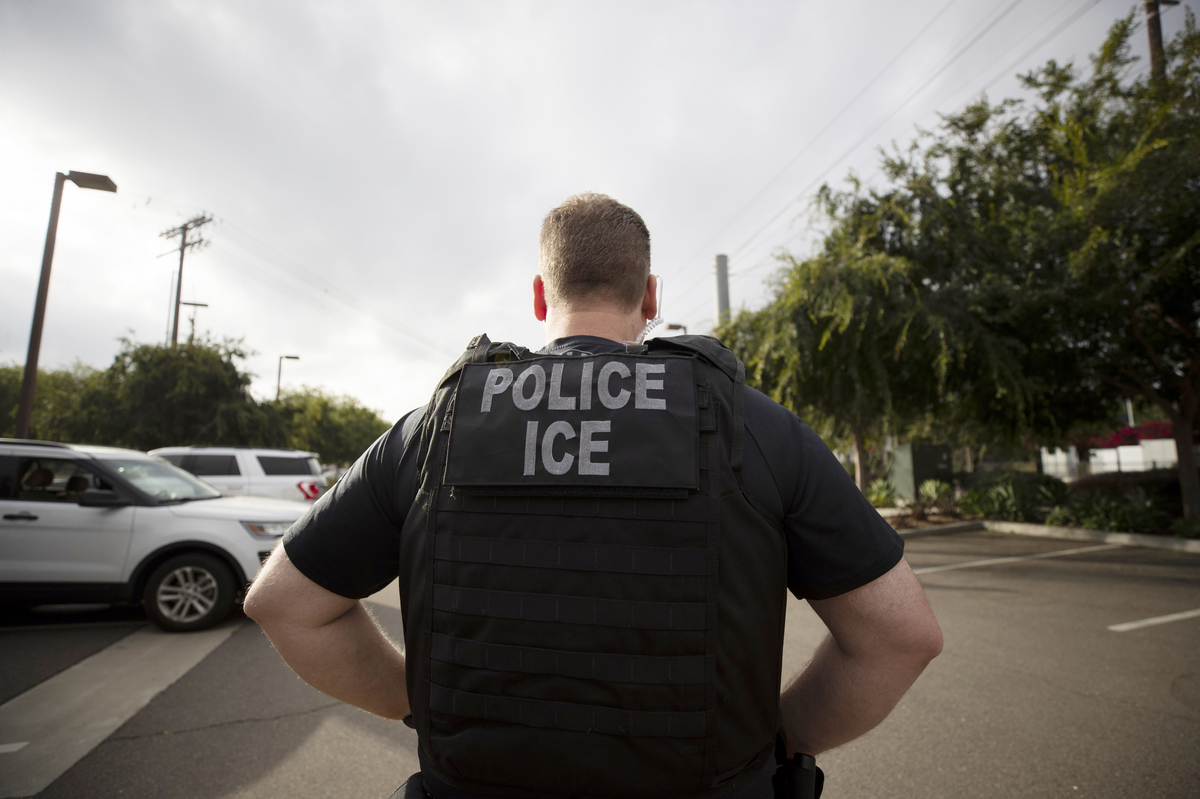 A U.S. Immigration and Customs Enforcement officer looks on during an operation in Escondido, Calif., in 2019. The Biden administration today announced new guidelines that are expected to sharply limit arrests and deportations carried out by ICE.

After four years of former President Trump's immigration crackdown, the Biden administration on Thursday announced new guidelines that are expected to sharply limit arrests and deportations carried out by Immigration and Customs Enforcement.

Under the guidance, ICE agents and officers have been told to prioritize threats to national security and public safety when deciding whom to arrest, detain and deport.

ICE officials said the guidance is intended to help the agency allocate its limited resources to cases the public cares about most.

"Like every law enforcement agency at the local, state, and federal level, we must prioritize our efforts to achieve the greatest security and safety impact," ICE Acting Director Tae Johnson said in a statement.

The guidance to ICE agents is part of a broader effort by President Biden to roll back the previous administration's hardline immigration policies. Also today, Congressional Democrats unveiled an immigration bill — a plan that President Biden had proposed on his first day in office.

The bill includes a path to citizenship for the estimated 11 million undocumented immigrants living in the United States and a fast-track process for young "Dreamer" immigrants brought to the country illegally as children. The bill faces steep hurdles in a divided Congress.

Changes at Immigration and Customs Enforcement also face pushback — from outside the agency and within. Immigration hawks complain that the new guidance will prevent ICE agents and officers from doing their jobs — in essence, abolishing ICE without actually abolishing it.

"The men and women of ICE, they took an oath to enforce immigration laws," said Thomas Homan, who served as acting ICE director under former President Trump. "It's unfortunate they can't do the job. ... And it's unfortunate that many criminals are going to be walking the streets of America because this administration simply thinks they're not important enough to take off the streets."

ICE is charged with enforcing the nation's immigration laws — including arresting and deporting people living in the country illegally. In many ways, its agents became the public face of Trump's immigration crackdown, spreading fear and confusion in immigrant communities.

The new guidance also was greeted with criticism from some immigrant advocates.

Naureen Shah, senior advocacy and policy counsel for the American Civil Liberties Union, said in a statement that the Biden administration isn't going far enough to "fully break from the harmful deportation policies of both the Trump and Obama presidencies."

Shah said the guidance would lead to "continued disproportionate deportations of Black and Brown immigrants, including Muslims" and that it contradicts the Biden administration's pledge to make sure that people seeking asylum are treated with dignity.

The new guidance directs ICE agents and officers to focus on non-citizens who recently crossed the border illegally, or who are deemed to be threats to national security or public safety.

The guidance defines a public safety threat as someone who has been convicted of an aggravated felony, such as murder and rape, or of actively participating in a criminal street gang.

Field officers have been instructed to seek pre-approval from supervisors before making arrests of non-citizens convicted of other crimes, such as minor drug offenses, immigration offenses, and driving under the influence.

In practice, that means ICE arrests would be limited largely to immigrants who have been convicted of felony offenses and are already detained in federal or state prisons.

The Obama administration instructed ICE to prioritize criminals for removal. He then faced criticism from immigrant advocates who decried the dramatic rise in deportations under his watch, as well as immigration hardliners who said he shouldn't have set any priorities that tied agents' hands.

The Biden administration guidelines are more restrictive — and facing the same range of criticism.

"Obama-era policies... set a dangerous precedent for the non-enforcement of the immigration laws of the United States in the name of prioritizing scarce ICE resources," said Andrew Arthur, a former immigration judge who is now at the Center for Immigration Studies, a nonprofit in Washington that advocates for lower levels of immigration.

The Biden administration's plan is "much, much worse," Arthur wrote in a blog post.

Homan, the former acting director of ICE, predicted that the new guidance would hurt morale at the agency.

While the union representing ICE agents has been silent on the new Biden guidance, the National ICE Council twice endorsed Trump for president and agents talked openly about feeling empowered during his administration.

Shortly before the Trump administration ended, the union signed an unusual labor agreement with ICE. According to a whistleblower complaint, the deal would have given the union extraordinary power to "indefinitely delay" changes to immigration enforcement policies that it doesn't like.

The Biden administration said this week it is moving to scrap the deal.