Accessibility links
Highlights From The House Coronavirus Relief Package The legislation is set for a vote on the House floor at the end of the week. The Senate is then expected to modify it to ensure it can pass procedural hurdles. 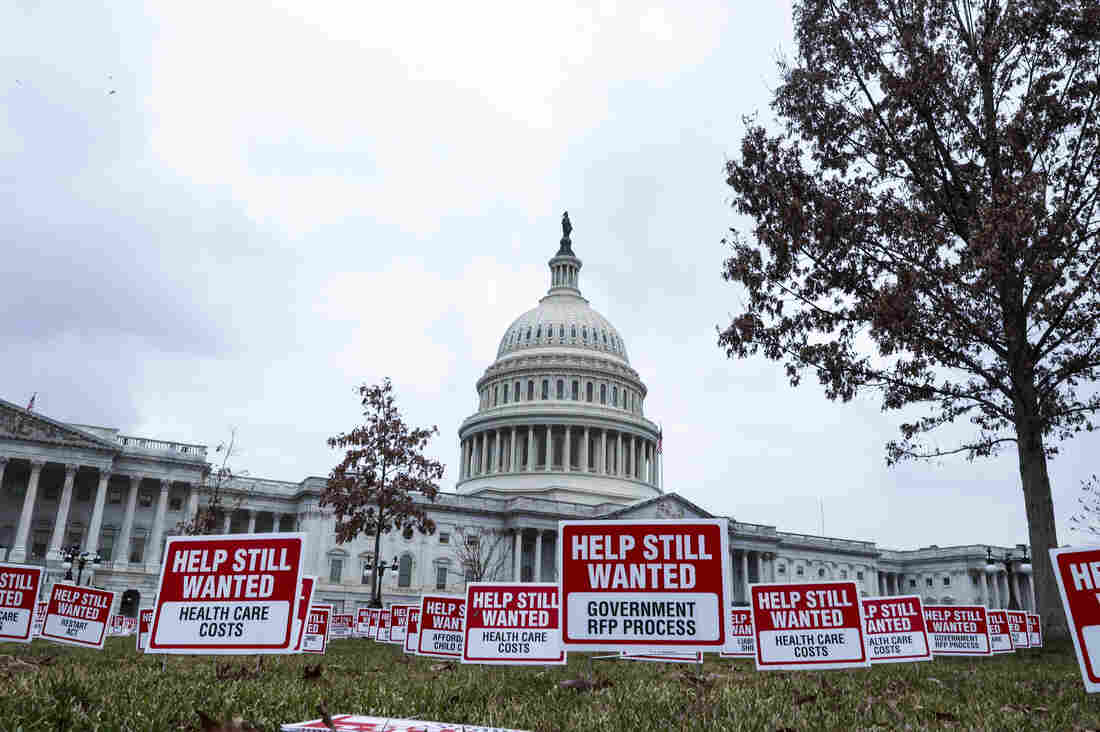 Signs reading "Help Still Wanted" are positioned on the lawn outside the U.S. Capitol on Jan. 5. The House is set to vote on a coronavirus relief package by the end of the week. Tasos Katopodis/Getty Images hide caption 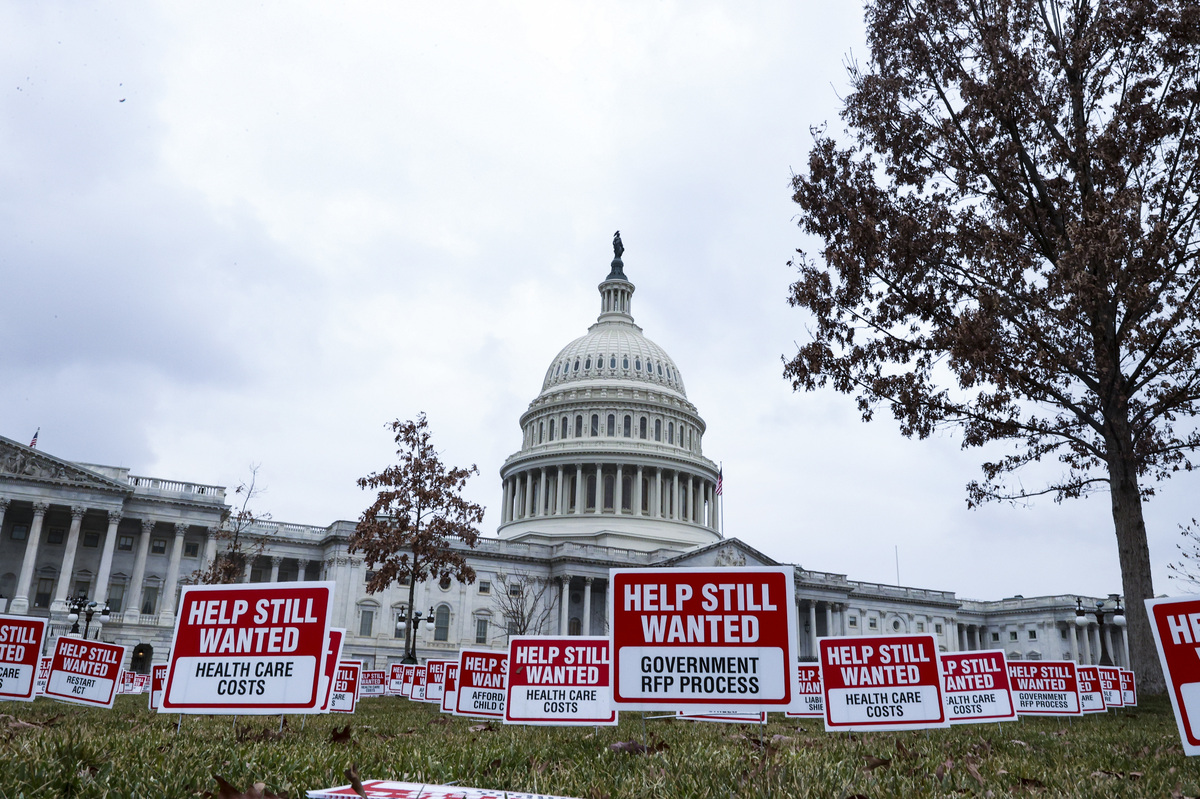 Signs reading "Help Still Wanted" are positioned on the lawn outside the U.S. Capitol on Jan. 5. The House is set to vote on a coronavirus relief package by the end of the week.

The legislation is set for a vote on the House floor at the end of the week. The Senate is then expected to take up the legislation and attempt to modify it to ensure it can pass procedural hurdles while still satisfying all 50 Senate Democrats.

Republicans have generally rejected the need for such a sweeping relief package. Many, including Senate Minority Leader Mitch McConnell, R-Ky., say Congress should wait to see the economic impact of the relief measures that were approved in December. Democrats, including Biden, have insisted that more relief is needed now, particularly for lower-wage workers and people who have been unable to find new jobs in the pandemic.

White House press secretary Jen Psaki has told reporters that the legislation is aimed at helping people who are most at risk as the economy remains frozen by the virus.

But Senate Democrats remain split over some key elements, like a plan to increase the federal minimum wage to $15 over the next four years. Leaders are focused on working out any differences among Democrats before March 14, when current federal unemployment benefits are scheduled to expire.

Here's a look at some of the more closely watched elements of the legislation.

Minimum wage: Progressives are pushing for an increase to the minimum wage, boosting it to $15 an hour by 2025.

Over the weekend, Sen. Bernie Sanders, who chairs the Senate Budget Committee, told CNN he was "confident" the Senate parliamentarian would determine that including such a measure falls within the strict rules of reconciliation.

Biden has said he supports increasing the minimum wage, but is doubtful it can be passed through the Senate reconciliation process that only needs 51 votes.

But even if the parliamentarian rules that the measure can be included, there are two moderate Democrat senators who will likely push back: Joe Manchin of West Virginia and Kyrsten Sinema of Arizona.

Another round of stimulus checks: The latest round of direct payments would send $1,400 per person for people earning up to $75,000 and couples earning $150,000. The payments would be reduced for individuals earning over that amount but under $100,000 or more per year. The legislation also includes an additional $1,400 per dependent regardless of age.

New financial support for parents: Democrats approved a major temporary overhaul to the child tax credit that could mean most families with children would receive monthly payments if the bill becomes law. The legislation increases the existing child tax credit to $3,000 for children 6 to 17 and $3,600 for children under 6. The amount is gradually reduced for couples earning over $150,000 and individuals earning over $75,000 per year. Families eligible for the full credit would get payments of $300 per child, per month, from July 2021 through the end of the year.

Expanded tax credits for low-income workers without children: The bill would expand the Earned Income Tax Credit for childless workers. Anyone 19 or older earning up to $11,610 would be eligible for $1,502. The legislation would increase both the income threshold and the amount of the payment.

Changes to Paycheck Protection Program: The bill includes $7.25 billion in new money for the PPP program and would allow more nonprofits to apply, including those groups that engage in advocacy and some limited lobbying. It also allows larger nonprofits to be eligible.

Relief for restaurants and bars: The Small Business Administration would get $25 billion for a new grant program for "restaurants and other food and drinking establishments." Grants would be available up to $10 million per entity and $5 million per physical location with a maximum of 20 locations. The legislation sets aside $5 billion of the total money to be targeted to businesses with less than $500,000 in revenue in 2019.

Public health: $7.5 billion in funding for the Centers for Disease Control and Prevention to track, administer and distribute the COVID-19 vaccines. Also included is $1 billion to educate the public on the vaccine in order to boost confidence in it. Forty-six billion dollars will go toward diagnosing and tracing COVID-19 infections. Nearly $2 billion would go toward buying and distributing various testing supplies and PPE.

Support for low-income families: $4.5 billion for the Low Income Home Energy Assistance Program to help families with home heating and cooling costs. One provision would give the secretary of agriculture the authority and funding to temporarily boost the value of cash vouchers for the Special Supplemental Nutrition Program for Women, Infants and Children (WIC) up to $35 per month for women and children for a four-month period during the pandemic.

Support for older Americans: $1.4 billion in funding for programs authorized under the Older Americans Act, including support for nutrition programs, community-based support programs and the National Family Caregiver Support Program.

Food security: Maintains the 15% increase in Supplemental Nutrition Assistance Program benefits through Sept. 30, 2021. Allocates $25 million to promote technological improvements to modernize the program. $37 million to be provided to the Commodity Supplemental Food Program for low-income seniors.

Transportation: $30 billion for transit costs, including payroll and PPE. $8 billion for airports, $3 billion for temporary payroll support program to help support the aerospace manufacturing industry and $1.5 billion to recall and pay Amtrak employees who were furloughed because of the pandemic and to restore various daily routes. $15 billion would also be allocated to support workers in the airline industry.