Accessibility links
Iraqis Visit Babylon And Other Heritage Sites For 1st Time Domestic tourism has been strong in Iraq's northern Kurdish region, but sites in more impoverished, insecure areas tend to be visited less. A few Iraqi tourism companies are trying to change that. 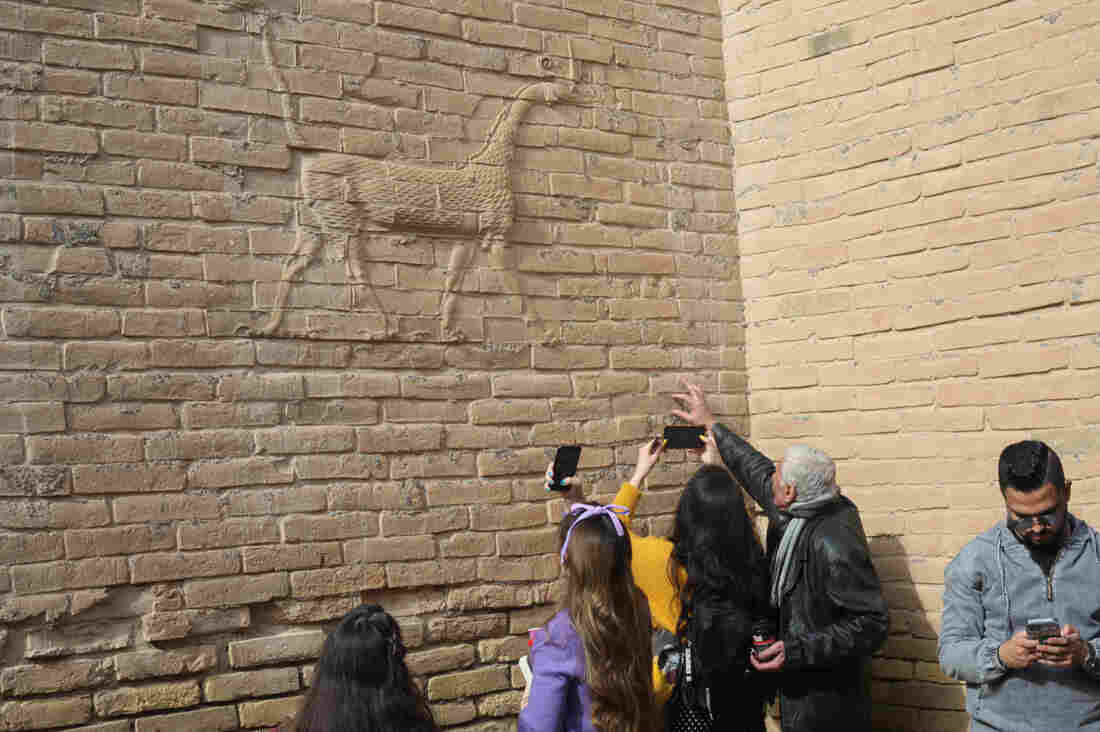 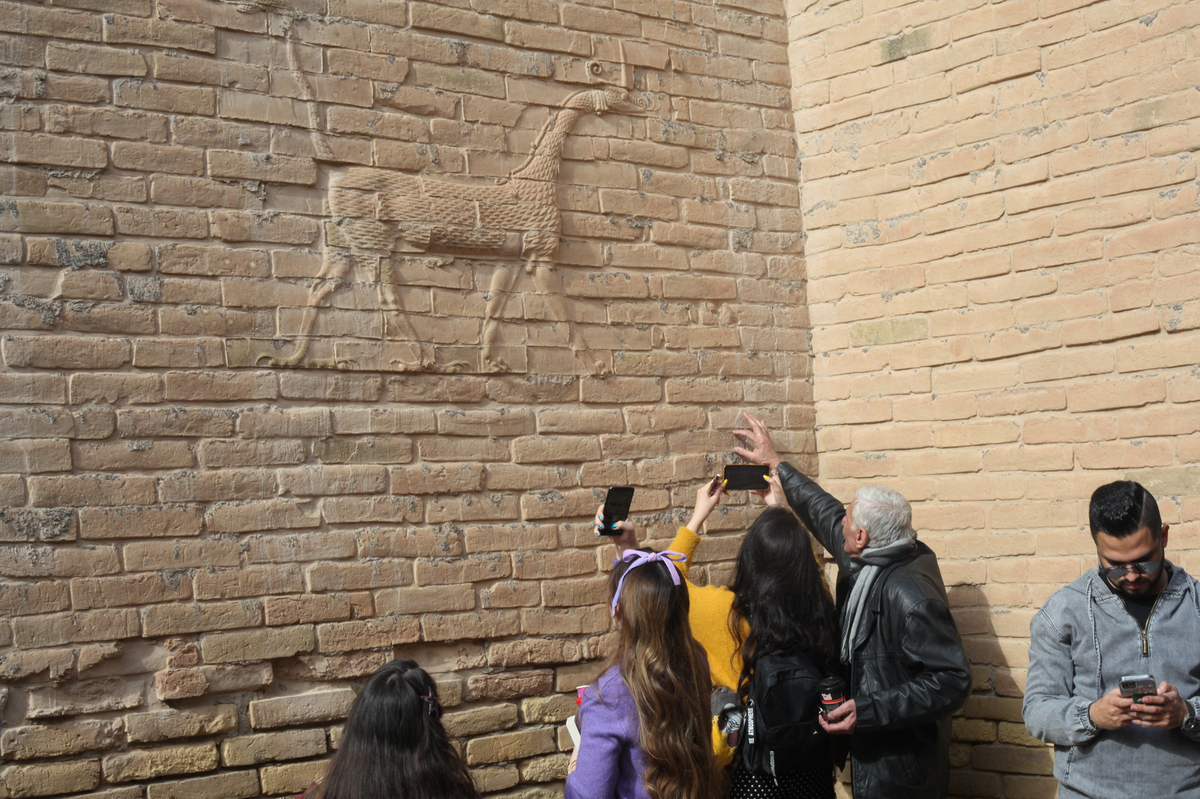 Visitors with the Bil Weekend tourism company take photographs inside the ruins of the ancient city of Babylon, in the area around the Ishtar gate. The animal on the walls ins a dragon-like creature associated with the Babylonian god Marduk.

BABYLON, Iraq — On a mild winter weekend, the sun pours down on the yellow archways of the reconstructed palace of King Nebuchadnezzar II at the site of the ancient city of Babylon. Nearly three millennia after Nebuchadnezzar's reign, visitors from a tour group cluster to admire a brick frieze depicting strange creatures that look like lions with eagle claws.

Snapping photographs, they pass under arches, through hallways and across vast courtyards, imagining the regal ceremonies, worship and gossip of the past.

"It's great!" says Furqan Fouad, a 21-year-old Iraqi visitor. "It's my first time coming here and I'm very interested in history because I'm a novelist."

She's carrying a copy of her novel, whose cover is purple like her sweater and hairband. "It's a sci-fi and a fantasy, and it's about Ishtar," she says, referring to a Mesopotamian goddess of love and war. 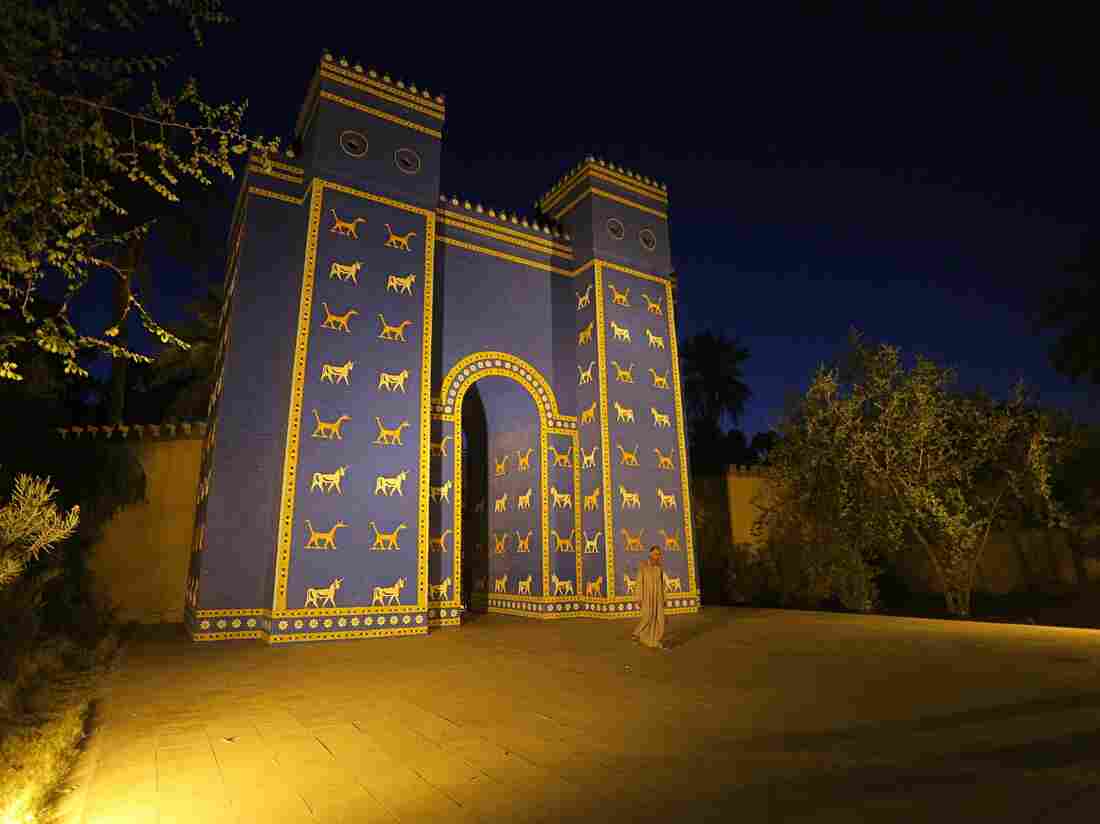 A man walks in front of Ishtar Gate at the site of Babylon, Iraq, in 2019. Anmar Khalil/AP hide caption 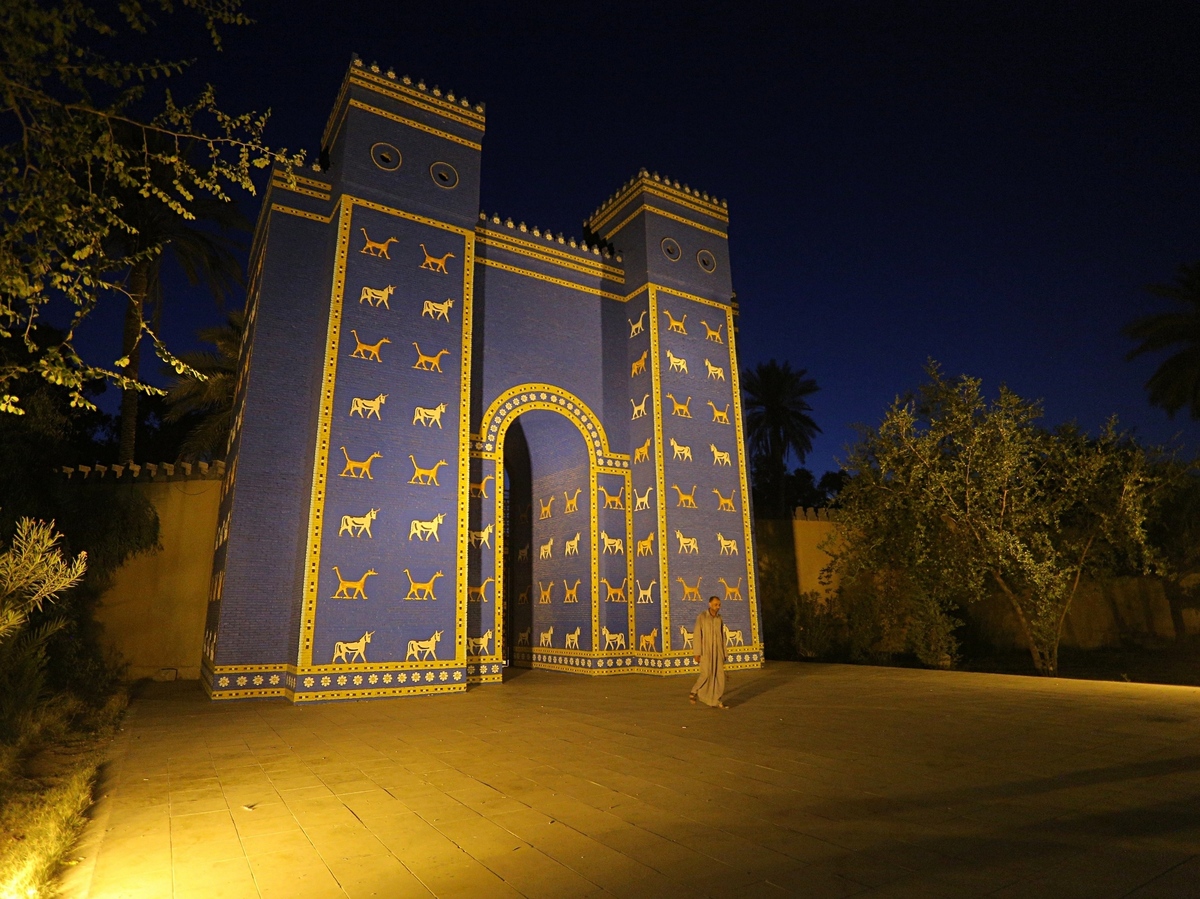 A man walks in front of Ishtar Gate at the site of Babylon, Iraq, in 2019.

The Babylon ruins, once the capital of Nebuchadnezzar's empire, are among many archaeological sites in Iraq bearing witness to some of the world's oldest and most magnificent cities. Named a UNESCO World Heritage Site in 2019, the site is about an hour and a half's drive south of Baghdad. But even before the pandemic, relatively few people came.

"I'm 25 years old now, and I feel like it's a pity I didn't come here before — because when I came, it was like magic, really," says dentist Abdullah al-Khateeb.

While domestic tourism has traditionally been strong in Iraq's northern Kurdish region, sites like Babylon, in more impoverished, insecure areas, are largely overlooked. Khateeb says when he was growing up, in the violence that followed the 2003 U.S.-led invasion of the country, the road south of Baghdad was dangerous and people weren't in the habit of taking an educational day trip.

"It's not the lifestyle here," he says. People "don't show the country to their children."

Today he's visiting with a tour company trying to change that. Bil Weekend ("At the Weekend") was founded by Ali Al-Makhzomy, who was working at Iraq's culture ministry when, one weekend in 2015, he decided to take a trip to Babylon. When he arrived, the site was closed.

"The guards said the site belongs to the government, and the government has Friday and Saturday as days off," Makhzomy says. His connections in the ministry allowed him to slip in and wander around, but he thought it ridiculous that regular Iraqis couldn't visit their heritage on their days off. 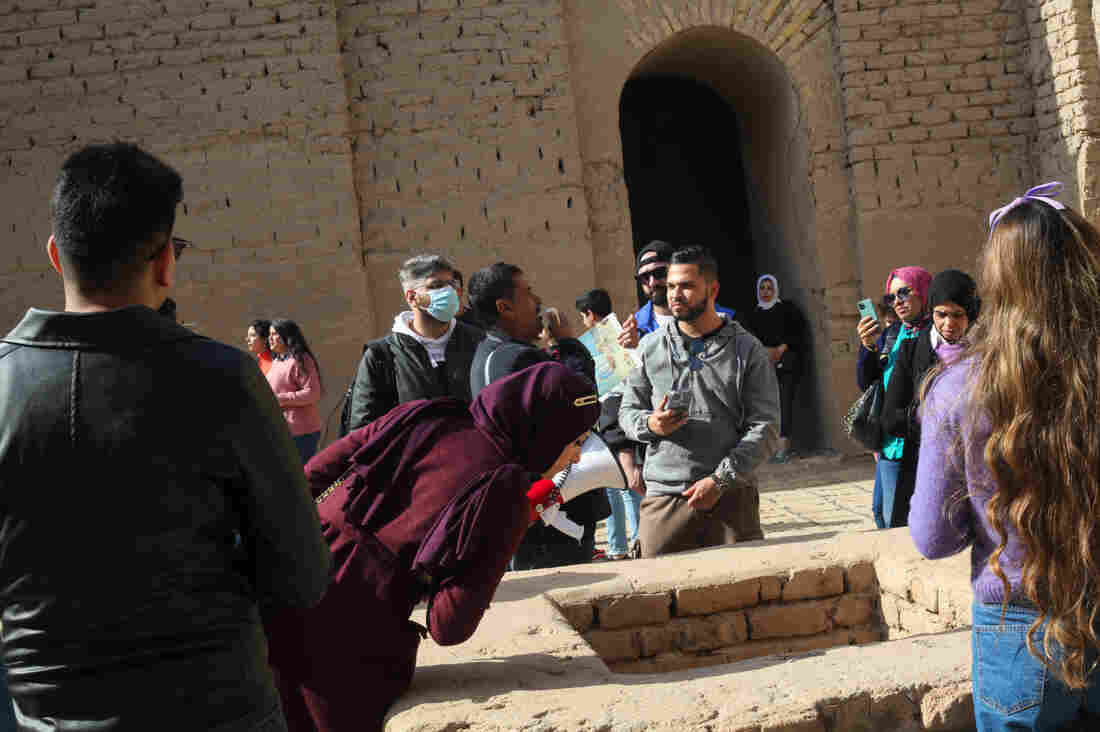 Tourists visiting the ruins of Babylon with the company Bil Weekend visit the Ninmakh temple. Ninmakh was a goddess worshipped in ancient Mesopotamia. Alice Fordham for NPR hide caption

He grew up with a love of Iraq's culture. "My family started this, feeding me with books, feeding me with love of heritage and culture," he says. "I always read about Iraq's history, about Mesopotamia. I always admired what used to be in Iraq, all the civilizations." He wanted more people to see the ruins.

So he asked his boss for permission to arrange a day trip on a Friday from Baghdad to Babylon for friends and families. He sold tickets (at a loss, that first time), rented a bus, took a musician, had a picnic. Bil Weekend's business concept was born.

The company now runs regular weekend bus tours, complete with picnics and musicians, to Babylon, and is one of a handful of companies doing so from Baghdad. Makhzomy says gradually his team got to know officials from the State Board of Antiquities and Heritage in Babylon, and was allowed to enter on weekends without problems. (It is now open on weekends to the public). 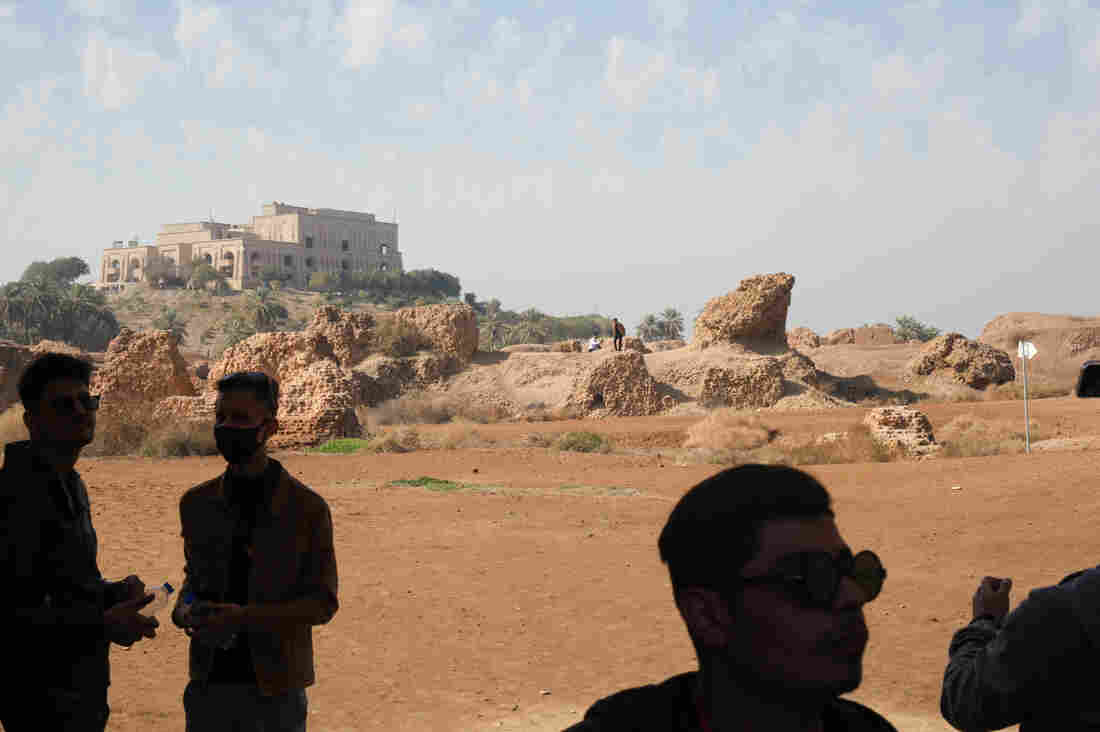 Visitors with the Bil Weekend tourism company take photographs at the site of the ancient ruins of Babylon, with a palace more recently built by Saddam Hussein in the background. Alice Fordham for NPR hide caption

A musician plays old Iraqi songs on the oud while the visitors sing along. The reconstructed brick halls their voices echo around are fragile and have seen much upheaval in the last century. Foreign archaeologists began excavating the site a century ago, and many of its treasures ended up in Europe, with remnants of glazed tiled friezes and a large archway all taken to Germany.

The dictator Saddam Hussein left his own mark. He rebuilt a version of the palace on top of the mud-brick ruins; some of the bricks bear an inscription glorifying him. And then, in 2003, the U.S.-led invasion shook the country. Babylon was not spared.

"All this was like a camp for the army, armored vehicles and planes," says an official tour guide, who did not want NPR to name him because he doesn't have permission to speak to media.

American forces turned the site into a base, which was briefly used by Polish forces. A 2009 UNESCO report documented extensive damage — including "smashed bricks" and "effects of heavy vehicle wheels" — by multinational forces. 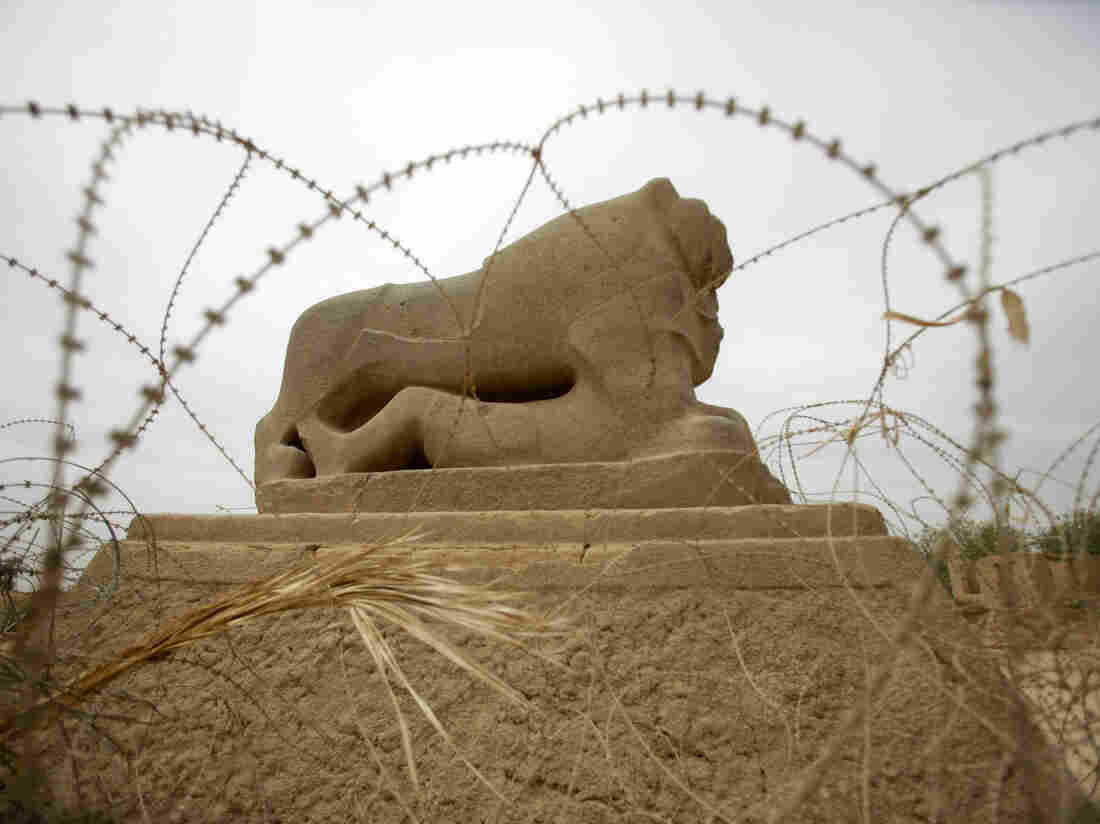 Barbed wire surrounds the Lion of Babylon, seen in 2012 at the archaeological site of Babylon. Khalid Mohammed/AP hide caption 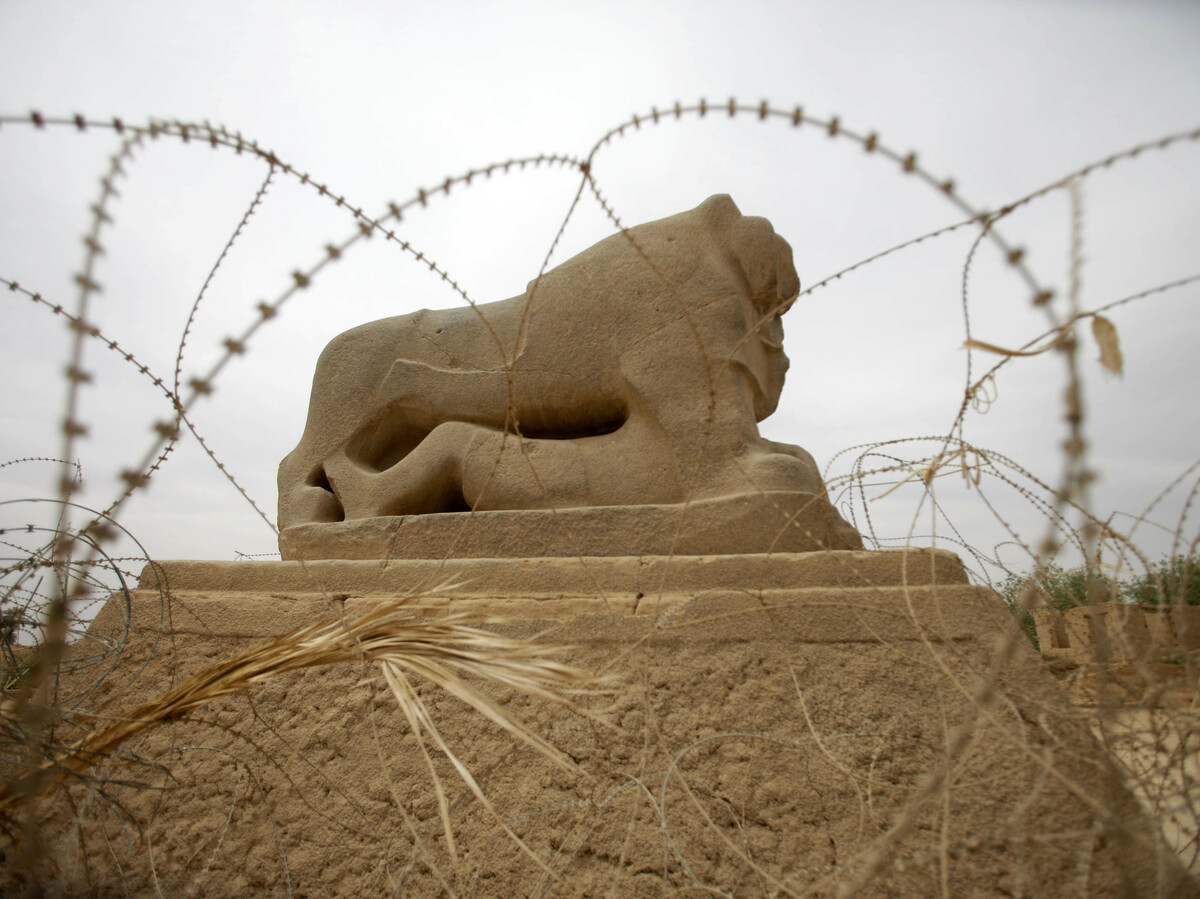 Barbed wire surrounds the Lion of Babylon, seen in 2012 at the archaeological site of Babylon.

"The airport was close to the temple that we visited," the guide says, gesturing toward part of the complex housing an ancient temple. "An airport for military planes. When they took off, they shook the city."

He says armored vehicles also parked near the more than 2,000-year-old basalt Lion of Babylon, depicting a lion trampling a man.

When foreign forces left the site in 2004, Iraq's security was beginning to worsen. The guide — who also worked as a guide in those days — says he received a death threat and lived in fear for his life for years. Now, he says, things are better. It makes him happy to take tour groups around the site, as his father and grandfather did before him.

"If someone visits with his family, he comes again, and brings other families with him," he says. 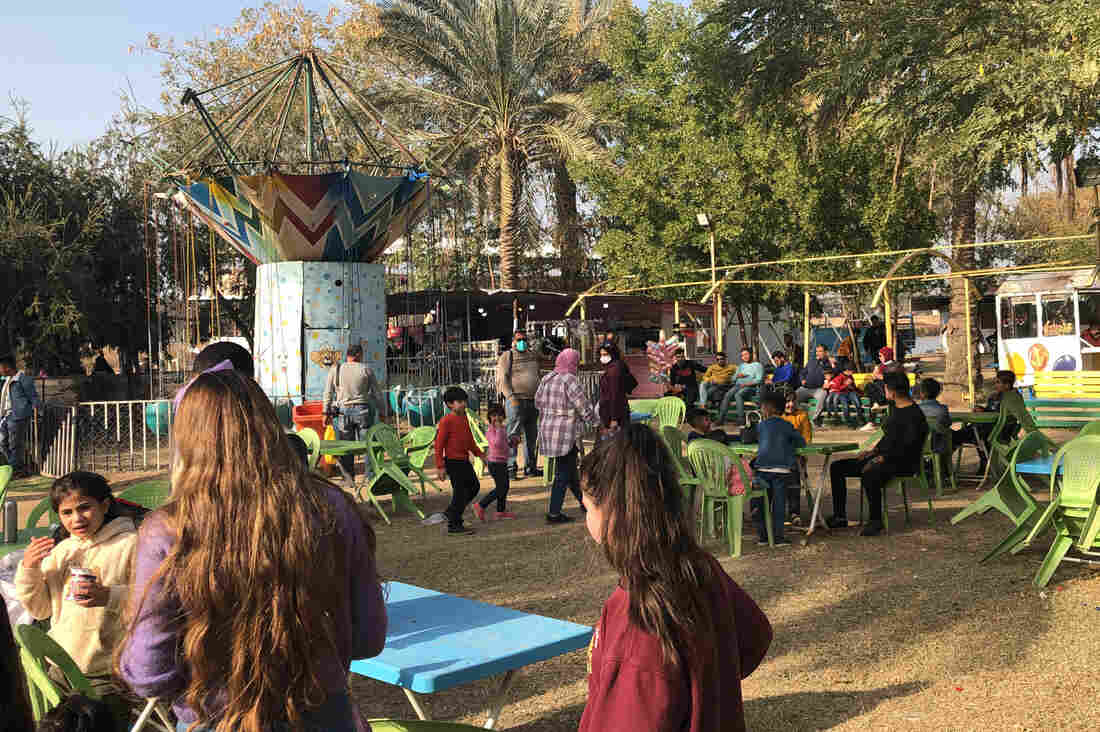 Tourists picnic at a park on the banks of the Euphrates river close to the site of the ancient city of Babylon. Alice Fordham for NPR hide caption

Since Babylon reopened in 2009, tourist numbers have fluctuated. The local tourist board says the best recent year for Iraqi tourists was 2017, when more than 35,000 visited. This winter — normally peak season because of the cool weather — the pandemic affected the numbers and about 10,000 came. The year before, many stayed away for fear of being caught up in violence at demonstrations in nearby cities.

But some local investors believe in the promise of domestic tourism in places like this that have long been under-visited.

Several tours now run from Baghdad to the scenic marshlands of the south — which some scholars say may have been the biblical Garden of Eden — where sleek buffalo swim through grasses and people live on islands. Tourism has been growing there gradually, as security has improved and hotels have opened.

Nearby, visitors can also see a reconstruction of the famed ziggurat in the ruins of the city of Ur, even older than Babylon.

New hotels have opened in Nasiriyah, the closest city.

"Nasiriyah has a special position in Iraq," says Imad al-Atawi, who recently launched two hotels there. "And it has very beautiful nature. We planned to open hotels because we think Nasiriyah will attract many tourists in the future."

His investment is not without risk. Anti-government demonstrations in Nasiriyah have turned violent in recent months.

Still, the tourists visiting Babylon say they're keen to see more of their country.

Sultan Ali takes selfies outside the garish replica of Babylon's famed blue Ishtar Gate, and has been to see the original, rebuilt with its jewel-colored tiles in Berlin's Pergamon Museum.

"I felt actually sad," he says, "because this is our thing — our history, our civilization, our everything, which we have to show to others, not we have to go to Berlin to see." 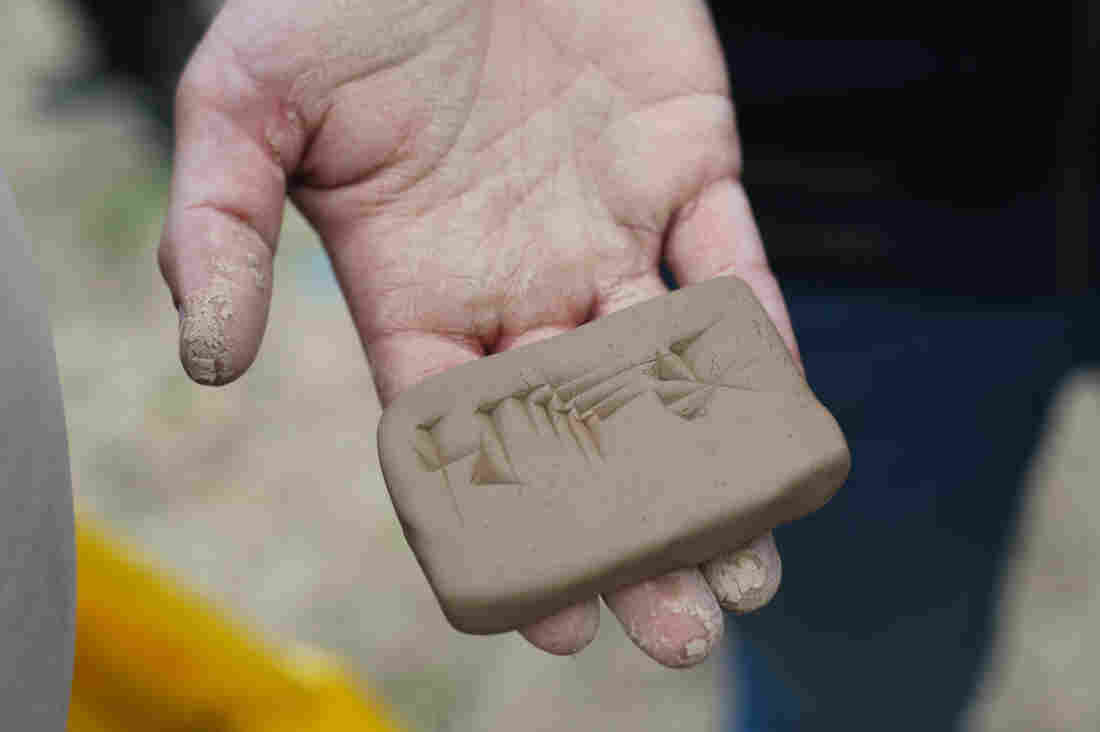 A young man shows a small clay tablet with his name written in cuneiform, part of his tour of the ancient city of Babylon. Alice Fordham for NPR hide caption

For now though, while security is fragile, he's ambivalent.

After the ruins, he and his friends picnic by the Euphrates River, and take a boat ride. They wander round the shell of Saddam Hussein's old palace. A guide inscribes their names in cuneiform on clay tablets. Immediately, photos of the ancient script glow bright on their Instagram feeds.