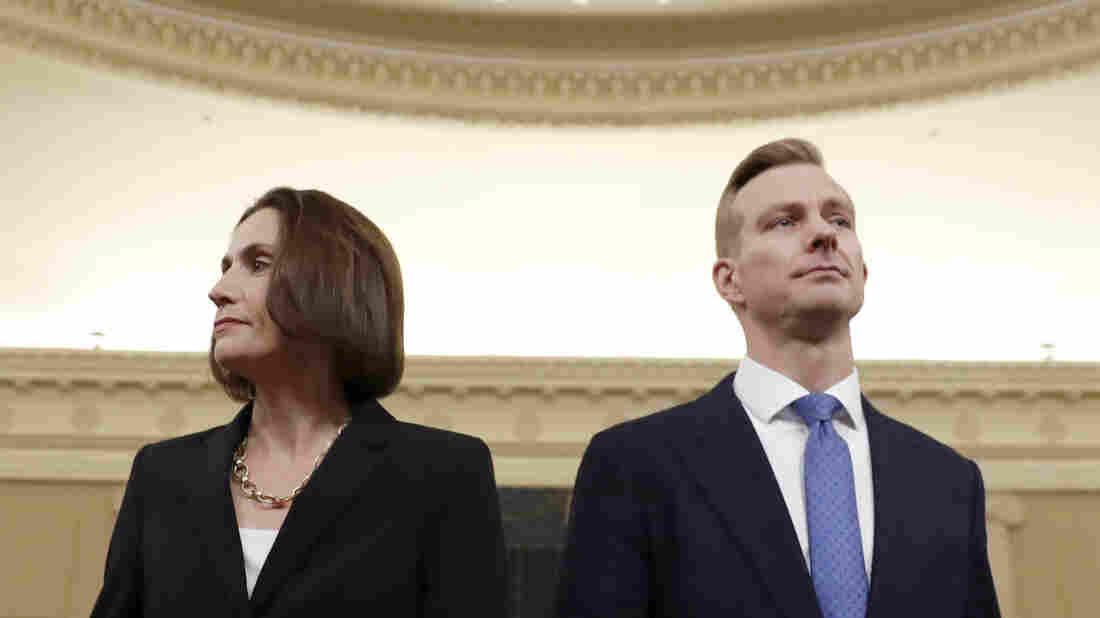 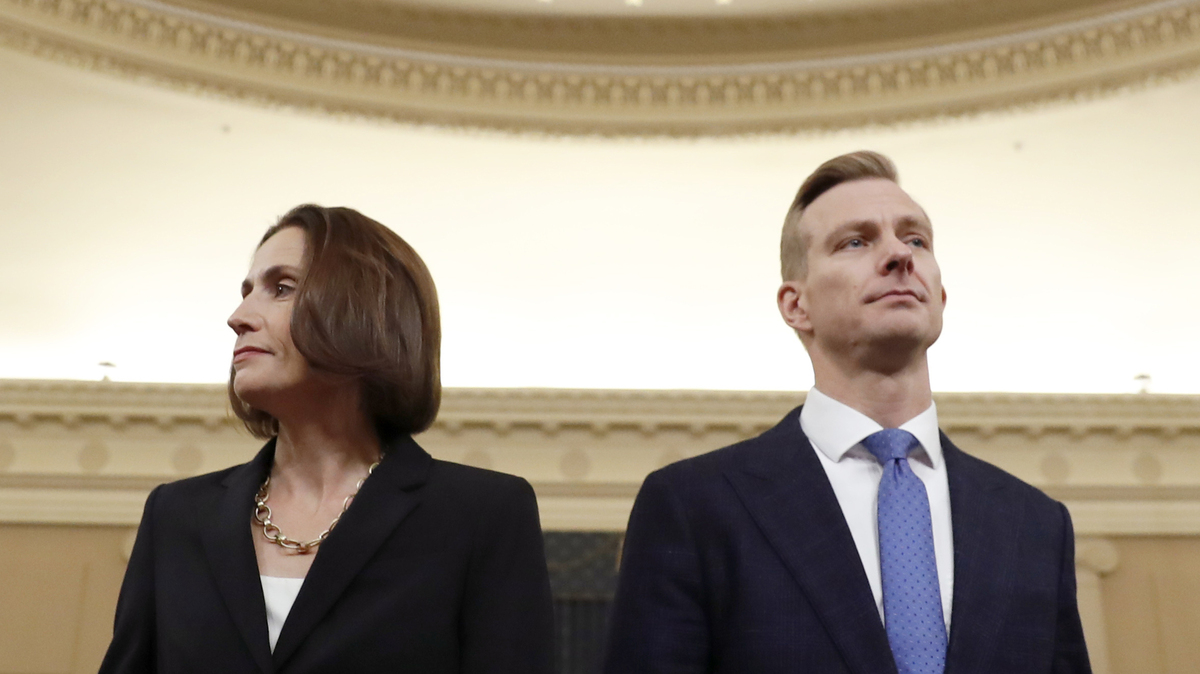 Former White House national security aide Fiona Hill and David Holmes, a U.S. diplomat in Ukraine, return from a break to continue their testimony before the House Intelligence Committee on Thursday.

Testimony has concluded for the last day of public hearings this week.

Fiona Hill, who served as the top Russia expert on the National Security Council before resigning last summer, criticized Republicans on the House Intelligence Committee for advancing theories that Ukraine, and not Russia, interfered with the 2016 presidential election.

Testifying on the third and final day of impeachment hearings before the panel this week, Hill said, "I would ask that you please not promote politically driven falsehoods that so clearly advance Russian interests."

In her opening statement, which she read before the panel, Hill, an immigrant to the U.S. from the United Kingdom, said, "I refuse to be part of an effort to legitimize an alternate narrative that the Ukrainian government is a U.S. adversary, and that Ukraine — not Russia — attacked us in 2016. These fictions are harmful even if they are deployed for purely domestic political purposes."

Hill's remarks were directed at GOP members of the panel, including the ranking member, Devin Nunes, R-Calif., who has repeatedly referred to the debunked theory that Ukrainian interests targeted President Trump in the 2016 campaign.

Hill said that Russian President Vladimir Putin and his security services "operate like a Super PAC. They deploy millions of dollars to weaponize our own political opposition research and false narratives."

She added, "When we are consumed by partisan rancor, we cannot combat these external forces as they seek to divide us against each another, degrade our institutions, and destroy the faith of the American people in our democracy."

It was Holmes who went to lunch in July in Kyiv with the U.S. ambassador to the European Union, Gordon Sondland, and overheard a phone call involving the president. During that encounter, Sondland called Trump on his mobile phone to talk about the "investigations" that Trump wanted from his Ukrainian counterpart, Volodymyr Zelenskiy.

Holmes told the committee Thursday that he remembered the call because "I've never seen anything like this in my foreign service career," describing hearing the president on the phone at a restaurant.

As Holmes testified, Trump tweeted that "I have been watching people making phone calls my entire life. My hearing is, and has been, great. Never have I been watching a person making a call, which was not on speakerphone, and been able to hear or understand a conversation. I've even tried, but to no avail. Try it live!"

I have been watching people making phone calls my entire life. My hearing is, and has been, great. Never have I been watching a person making a call, which was not on speakerphone, and been able to hear or understand a conversation. I’ve even tried, but to no avail. Try it live!

White House press secretary Stephanie Grisham blasted Democrats on Thursday and questioned the testimony from Hill and Holmes. "Today's witnesses rely heavily on their own presumptions, assumptions and opinions," she said in a statement. "These two witnesses, just like the rest, have no personal or direct knowledge regarding why U.S. aid was temporarily withheld. The Democrats are clearly being motivated by a sick hatred for President Trump and their rabid desire to overturn the 2016 election. The American people deserve better."

In an absorbing exchange, Hill testified that she asked Sondland: "Who put you in charge of Ukraine? Which I admit was a bit rude and he told me 'the President,' which shut me up."

She said in a subsequent meeting she was angry with Sondland because he wasn't coordinating with the National Security Council on Ukraine policy. She said Sondland told her that he had been briefing Trump, acting White House chief of staff Mick Mulvaney, Secretary of State Mike Pompeo and national security adviser John Bolton.

Hill testified that Sondland asked, "Who else do I have to deal with?" She said she responded at the time that there is a robust coordination process across the U.S. government.

But after hearing Sondland's testimony on Wednesday, Hill said she realized Sondland was right.

She added, "I did say to Ambassador Sondland: 'Gordon I think this is all going to blow up.' And here we are."

Hill also is a key witness about Bolton, who has been described as an important player in the Ukraine saga but from whom Congress has not heard directly.

Bolton, per Hill, warned about the "drug deal" being cooked up by Trump's deputies with Ukraine and about the role played by Giuliani, whom Hill said Bolton called a "hand grenade that is going to blow everybody up."

In his testimony Wednesday, Sondland didn't dispute much of what Holmes has told investigators about the episode, but there was one key discrepancy — over the specific words he used.

Holmes said that Sondland told him that Trump only cared about "big stuff" that affected him, like what Holmes called the "Biden investigation" Trump wanted from Ukraine.

Sondland says he didn't know in real time that the investigation connected with the word "Burisma" — a Ukrainian company that for a time paid the son of former Vice President Joe Biden — was, in effect, code for the Biden family.

But Hill testified Thursday that it "was very apparent to me that was what Rudy Giuliani intended."

In his closing remarks, House Intelligence Committee Chairman Adam Schiff, D-Calif., drew a parallel between this impeachment probe and Watergate, saying that Trump's alleged transgressions are "beyond anything that Nixon did."

But the difference, he said, is between this Congress and the 1973-74 Congress, in which Republicans gradually stopped supporting President Richard Nixon.

"Where is Howard Baker?" Schiff asked, referring to the Republican senator from that time who helped lead the Watergate investigation and famously asked, "What did the president know and when did he know it?"

Schiff said that in his view, "there is nothing more dangerous than an unethical president who believes he is above the law. We are better than that," Schiff said, banging the gavel down to close the session.

One question raised by the Thursday session — and not yet answered definitively by Democrats — is whether it will be the last.

Schiff, who has been leading this phase of the impeachment inquiry, hasn't said definitively whether the hearing would end his portion of the process.

That matters because it affects the timing of the balance of Democrats' putative impeachment program: Once Schiff's panel concludes its work, action could then shift to the House Judiciary Committee, which would need to initiate and advance articles of impeachment to the full House.

At her weekly news conference Thursday, House Speaker Nancy Pelosi said there are no decisions yet on the timeline for impeachment.

She deferred to committees of jurisdiction about any additional open hearings or deposition but said the facts are "uncontested" as to what happened. Pelosi repeatedly said that if the president has something to offer that is exculpatory, he should submit "under oath."

She pushed back at a question about the impeachment process not being bipartisan, as she initially said it needed to be, saying, "If Republicans are denial about the facts, if the Republicans do not want to honor their oath of office, then I don't think we should be characterized in any way because we are patriotic."

The speaker said the president has responded to the inquiry in a way that "is beneath the dignity" of the office of the presidency and added he sets "a very bad example for our children in the manner in which he behaves and speaks."

Asked about waiting for the legal battles to play out Pelosi said, "We cannot be at the mercy of the courts."

"That's a technique on the part of the administration" to delay.

"We are moving at the pace that truth takes us," Pelosi said.

If Trump were impeached in the House, a trial would be held in the Senate — one that Senate Majority Leader Mitch McConnell, R-Ky., said this week that he's convinced Trump would win.