Gaelynn Lea created the layers of sound in her captivating song by live looping, using only a looper pedal, a microamp and her violin.

March 3, 2016; Washington, D.C. – The judges have spoken: NPR Music is proud to present Gaelynn Lea (pronounced "Lee") of Duluth, Minnesota, as the winning artist of the 2016 Tiny Desk Contest. This will be officially announced on-air today on Morning Edition by All Songs Considered host Bob Boilen. Lea will also sit-down with All Things Considered later today for her first interview since being named the winner. See stations and broadcast times at npr.org/stations.

Gaelynn Lea was selected as the winning performance among thousands of submissions from all 50 states. Watch the entry and listen to her original song "Someday We'll Linger in the Sun" at NPR.org/music. 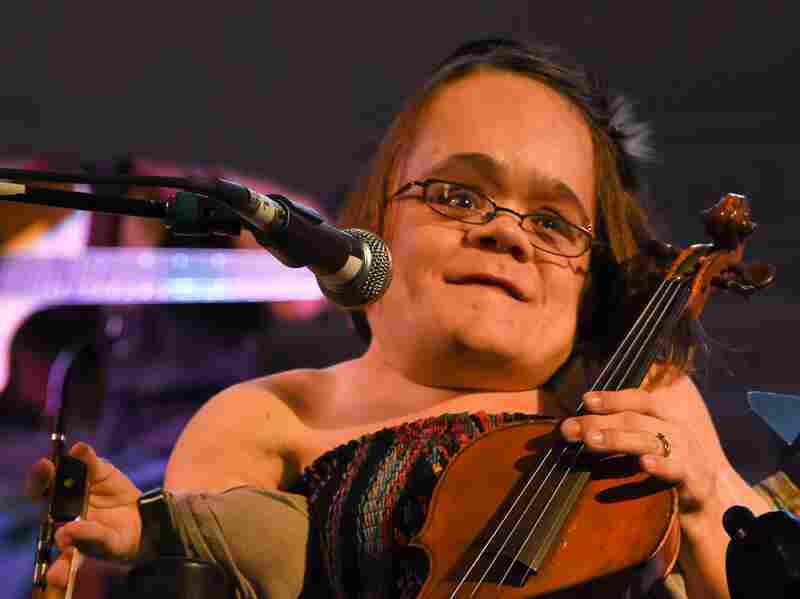 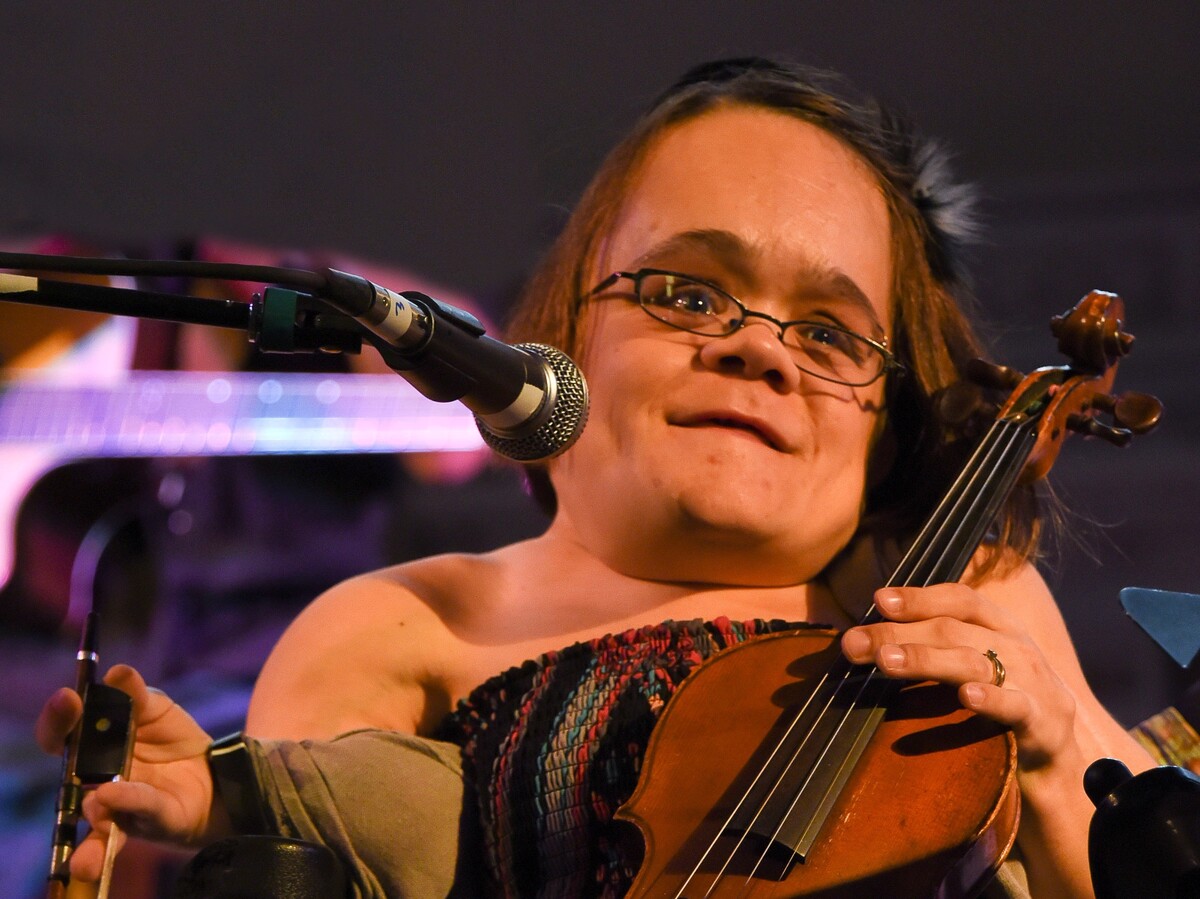 "The melody of this song wouldn't let go – it just stuck with me, it stuck with all the judges. It conveys an overwhelming emotion of yearning and love that's unforgettable," said Bob Boilen of NPR Music—whose desk has served as the stage of more than 500 Tiny Desk performances. "What we look for in the Contest is an artist who has something singular about what they do, something unique to them, something no one else is doing. Gaelynn Lea has that, and that simply won our hearts."

A panel of Tiny Desk concert alumni – Dan Auerbach of The Black Keys and The Arcs, Jess Wolfe and Holly Laessig of Lucius, and soul artist Son Little – joined Boilen and All Songs Considered co-host Robin Hilton in choosing Gaelynn Lea as the Contest winner.

"This song starts off with the sound of 20 old floorboards groaning and creaking in unison and then Karen Dalton and Joanna Newsom melt together in the form of Gaelynn Lea and set about absolutely obliterating your heart," said Dan Auerbach of The Black Keys and The Arcs.

Lea created the layers of sound in her captivating song by live looping, using only a looper pedal, a microamp and her violin.

"The way her voice resonates is so unusual and beautiful and like nothing I've ever heard before," said Contest judge Jess Wolfe of Lucius. "It was a voice and an arrangement that captured me immediately. I can't wait to see what she does with Tiny Desk."

Lea's great love affair with music and the violin spans more than 20 years. First classically trained, she began learning traditional Celtic and American fiddle tunes at the age of 18. During her college years, she started sitting in with various folk/rock musicians and developed an improvisational style. Eventually she began singing and dabbling in songwriting.

"...so surreal, and probably hasn't completely sunk in yet."

- Gaelyn Lea, winner of the Contest, on the moment she found out she won.

Gaelynn has played alongside notable Minnesota musicians over the years, including Alan Sparhawk, Charlie Parr and Billy McLaughlin. She also regularly performs solo sets of experimental fiddle tunes sprinkled with her original songs with an aim to create a meditative, layered sound allowing the listener's mind to drift.

In November 2015, she independently released an album entitled All the Roads that Lead Us Home. It pays homage to the traditional fiddle tunes and beloved standards that Gaelynn has been playing for over a decade.

"I was totally floored, humbled and ecstatic," Lea said about the moment she got the call from NPR Music confirming her as this year's Contest winner. "It was so surreal, and probably hasn't completely sunk in yet."

In addition to performing, Lea also teaches private music lessons to both children and adults, specializing in Celtic/American fiddle and improvisational violin. Lea's deep connections with music and teaching have also served as a platform to advocate for disability rights in the Duluth community.

"There were so many amazing musicians who entered; it was cool to get a glimpse of all the wonderful artistic energy that exists in this country," she added. "I can't wait to start traveling with my music – it's truly a dream come true!"

Along with her newfound national exposure, Lea will perform an official Tiny Desk concert, to be released in early March as part of the regular NPR Music series.

NPR Music's Contest prize pack also includes a four-part event tour with stops at a live-taping of NPR's Ask Me Another program in Brooklyn, NY and at Lagunitas breweries in Petaluma, CA and Chicago, IL and in Portland, OR.

Many other bands and artists will participate in Tiny Desk Contest meetups this spring and summer. A series of six events will feature entrants hand-picked by NPR Music and Member stations, as well as "Lagunitas Local Favorites." More information on these local, music-filled events will be forthcoming.

The search for an unsigned artist or band kicked off its submission period on January 12 and closed on February 2, 2016, drawing more than 6,000 valid submissions from all 50 states. Entrants must have been at least 21 years old and currently live in the U.S. to have entered. View entries from around the country on the Contest's official Tumblr page, which highlights performances with furry friends, 17-member brass bands, and on desks at the beach, snowy mountains and in subway stations. Did we mention there's one with a desk on fire and an entire performance on a treadmill?

Since 2008, the Tiny Desk Concerts series has presented a stage shared by well-known musicians – Adele, T-Pain, Yo-Yo Ma, John Legend, Wilco – and artists on the rise – Courtney Barnett, Chvrches, San Fermin and The Lone Bellow. More than 500 intimate performances have been recorded for the series, available at NPR.org/music, YouTube and on Roku via their free, HD-quality and TV-ready Tiny Desk concerts channel.

Lagunitas Brewing Company began on a kitchen stove in Northern California in 1993. From actually getting beers into bottles and onto the streets, Lagunitas looks to the future... From expanding the Petaluma Brewery to building a second in Chicago and soon a third in Azusa CA to bringing its flagship IPA across the pond Lagunitas could probably make good beer on the Moon. Wherever you go, beer speaks, people mumble. More mumblings at www.lagunitas.com.