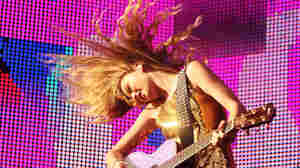 House Music Is Controllable Desire You Can Own 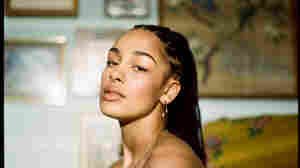 Jorja Smith's debut album, Lost & Found, is one of the standouts for June 8 releases. Rashid Babiker/Courtesy of the artist hide caption

June 8, 2018 • The best albums of June 8 include the candid, introspective rock of Snail Mail, the jazzy, laid-back R&B of British singer Jorja Smith, the sultry pop of Lykke Li, and more. 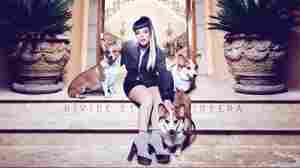 The album cover for Lily Allen's Sheezus goes after multiple targets, including Kanye West (in the album's title) and Queen Elizabeth II (the corgis). Courtesy of the artist hide caption

Is It Worth It To Work It?

May 8, 2014 • Iggy Azalea, Lily Allen and Sky Ferreira may not have much in common as musicians, but all three have recently drawn fire for appropriating masculine African-American imagery.

Lily Allen in Concert with The Bird and The Bee

April 8, 2007 • Lily Allen is Britain's most addictive pop artist with dizzying melodies and lyrics that are as comical as they are biting. Now on tour for her multi-million selling album Alright, Still, Allen performs at the 9:30 Club in Washington, D.C. in a full concert, originally webcast live on NPR.org.

February 16, 2007 • Lily Allen is pop star with a quick wit and a sharp tongue. After a string of hits in the United Kingdom last year, the 21-year-old artist has released her CD Alright, Still in America. She explains her creative process and inspiration.

February 7, 2007 • A review of the debut album Alright Still, by the 21-year-old British singer Lily Allen.

August 22, 2006 • Though she remains relatively obscure in the U.S., Lily Allen has spent the summer establishing herself as queen of the U.K. pop-music scene. Having already attracted blog- and press-fueled hype to rival that preceding Gnarls Barkley's "Crazy," Allen exudes swaggering star quality on "Smile."

February 16, 2009 • Hear a preview of the Laura Gibson's Beasts of Seasons on this edition of All Songs Considered. Also Lily Allen and Morrissey, K'naan, Sufjan Stevens, Jason Schwartzman's solo project and The Antlers.

December 20, 2007 • Tens of thousands of listeners voted in the All Songs Considered poll for the year's best CDs.

July 9, 2007 • Lily Allen's ska-infused pop music has officially achieved ubiquity: She's gone from a buzzed-about underground sensation to a mainstream darling in the span of only a few months. Her sly lyrics and joyful energy have helped make her a star.

October 26, 2006 • The year's best pop music from Lily Allen; The quiet and contemplative Damien Rice; Chilling out with The Hold Steady; Three new CDs from Tom Waits; A tragic treasury from The Gothic Archies and more.