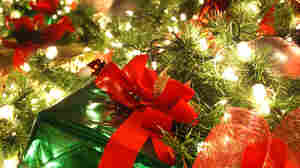 November 20, 2017 • Hear stories of the season told through music interviews from the NPR archives, including talks with Sting, Amy Grant, Jon Batiste and more. 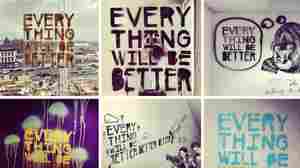 As the NPR Music team and others prepared to leave the network's old headquarters, mysterious messages began appearing on the windows and walls: "Everything will be better!" Mito Habe-Evans/NPR hide caption

April 17, 2013 • When it came time to pack up our things and head to the new NPR headquarters, we asked you to help us reflect on the move with your picks for the best songs about dealing with change. On this week's All Songs Considered we share some of our favorites.

August 14, 2009 • In "Last Train Home," Mead paints a simple but ambivalent portrait of a late-night train ride in which fleeting companionship is unmistakably intertwined with loneliness. The bright, piano-infused arrangement nicely balances out his melancholy words, as he basks in fresh memories while remaining aware that they've already receded into the past.

Road Trip: Songs to Drive By

August 13, 2008 • Not every road trip is a symbol of celebration and freedom; sometimes you're just wallowing in grief, or perhaps fleeing the soul-shrapnelizing ruin you've created back home. Regardless of your misery's root cause, there's no better place to mourn ostentatiously than alone in a car late at night, when no one's around to witness your pitiful, spluttering sobs.

Artists to Watch: A SXSW Preview

March 16, 2006 • If you're a music fan, the place to be this week is Austin, Texas. The annual South by Southwest Music Conference and Festival is in full swing. Music critic Stephen Thompson shares tracks from some of his favorite artists performing at the festival.

Artists to Watch: A SXSW Preview 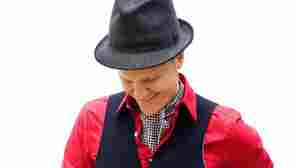 In "The Smile of Rachael Ray," David Mead crafts a melancholy Christmas song with an unlikely star. Courtesy of the artist hide caption

David Mead: Heartache For The Holidays

'The Smile of Rachael Ray' by David Mead 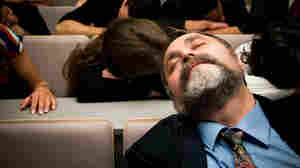 Listen While You Work

Songs For A Drab And Unfulfilling Existence

October 9, 2008 • As you sit in your bleak, gray cubicle and wrap up those third-quarter reports, be sure to take a moment, sweep away the ashes of your dashed dreams, don a pair of headphones, and listen to this five-song playlist as you plod grimly through this waking life. 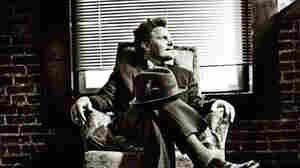 October 20, 2009 • Mead's warm high-register voice lends intimacy and warmth to Almost and Always, a quiet and soulful exploration of post-marital life. Performed with the backing of woodwinds and a string quartet, Mead experiments with richly ornamented melodies. Hear him in a session on World Cafe.