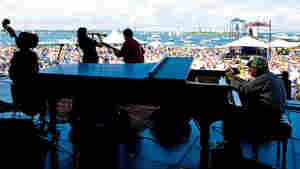 August 6, 2009 • Some say the best way to experience Newport Jazz is from a sailboat. On the Fort Adams stage, looking into the harbor, Wein relaxes at the piano with an all-star group. Later in the hour, bassist Dave Holland and three friends (including Chris Potter on tenor) stand up to the sun with rhythmic invention and assertive solos.

July 2, 2003 • Veteran producer, pianist, singer, club owner George Wein. He's the founder of the Newport Jazz Festival, the Newport Folk Festival, and the New Orleans Jazz and Heritage Festival. In the early 1950s he founded the jazz clubs Storyville and Mahogany Hall in Boston where jazz giants Art Tatum, Sidney Bechet, Charlie Parker, Stan Getz and Miles Davis played. In 1954 he launched the Newport Jazz Festival where he presented Ella Fitzgerald, Sarah Vaughn, Dave Brubeck and others. The other music greats he knew and worked with: Duke Ellington, Thelonious Monk, Charles Mingus, Louis Armstrong. Now 77 years old, Wein has written a new autobiography (with Nate Chinen), Myself Among Others: A Life In Music. 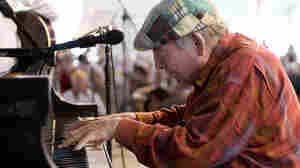 June 18, 2010 • The promoter and impresario virtually invented the jazz festival back in 1954, when he brought a busload of artsy musicians to Newport, R.I. The first Newport Jazz Festival was a huge success, and now, Wein has set out to reinvent the way promoters present concerts. His CareFusion Jazz Festival New York is now under way in venues throughout the city. 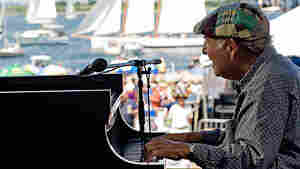 August 10, 2008 • The founder and impresario of jazz at Newport is also a pianist. He brings a handpicked set of musicians ranging from their twenties to nearly 80 for a rousing set of small-group swing.

Audio for this story is unavailable.
More from George Wein
Browse archive or search npr.org