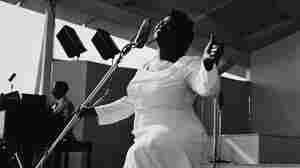 Mahalia Jackson sings at the Newport Jazz Festival in 1957. Mary Lou Williams heard her there and said she felt "cold chills run up and down my spine." Bob Parent/Getty Images hide caption

Gospel Queen On The King's Highway

September 26, 2019 • A contemporary of Rosetta Tharpe, gospel singer Mahalia Jackson had one of the great big, gorgeous voices of the 20th century, the echoes of which can still be heard in popular music today. 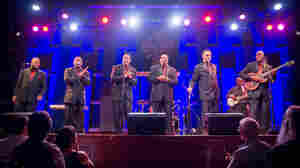 February 1, 2019 • Behind musical legends like Aretha Franklin, Elvis Presley and Ray Charles is one timeless genre that spans across lifetimes: gospel music.

December 17, 2004 • The roots of gospel music are not well-documented. Early recordings were lost. Stories behind the songs weren't written down. A new book recounts the history of the beloved American art form. NPR's Michele Norris talks with Robert Darden, author of People Get Ready!.

August 28, 2003 • Sherry Dupree, the archivist for the Gospel Hall of Fame and Museum in Detroit, Mich., tells The Tavis Smiley Show how gospel legend Mahalia Jackson played a significant role in the March on Washington.

September 14, 2000 • Guests: DONNIE MCCLURKIN Gospel singer his two albums are titled Donnie McClurkin and Live in London and More Nominated for a Grammy Award for Best Contemporary Soul Gospel Album Author of the forthcoming book Eternal Victim, Eternal Victor (Fall, 2000) HORACE CLARENCE BOYER Professor Emeritus, Music Theory and African-American Music, University of Massachusetts, Amherst Author, How Sweet the Sound: The Golden Age of Gospel (Univ. of Illinois, 2000) Its roots are in work songs and spirituals, but Gospel music has changed greatly in the last few decades. Early artists like Mahalia Jackson first brought gospel to a larger audience. Today, Contemporary Gospel incorporates elements from jazz, pop and even hip-hop. Join Juan Williams for a conversation with an award-winning Gospel singer about Gospel and its place in American music. 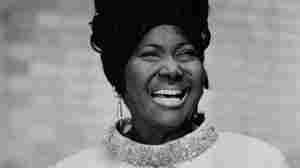 'His Eye Is On the Sparrow'

September 3, 2000 • Deborah Williams spotlights gospel singer Mahalia Jackson's definitive version of the spiritual His Eye Is On the Sparrow.

'His Eye Is On the Sparrow' 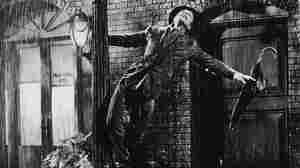 Gene Kelly's iconic performance in Singin' in the Rain was informed by the rhythms of jazz. MGM Studios/Hulton Archive hide caption

Singers In The Rain: Jazz Amid The Deluge

November 2, 2009 • It's early November, and for many in America, that means that when we go outside, we're likely to get wet. Whether we're dodging sprinkles, showers or downpours, November is part of a rainy season. Hear five songs from vocalists inspired by rain, including Gene Kelly, Patricia Barber and Mahalia Jackson. 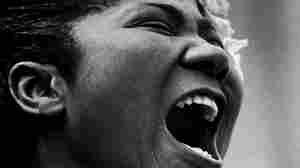 February 8, 2010 • The gospel singer was born about 100 years ago in New Orleans, and when she was 16, she traveled the well-worn path up the Mississippi to Chicago. Beginning in the 1940s, she was one of the first singers to take gospel out of the church, drawing white audiences and selling millions of records. In the process, she inspired generations of singers.