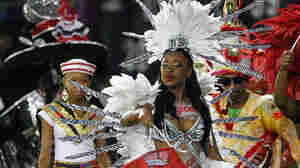 Carnival season is already over in Trinidad and Tobago, but we're sure we're going to be seeing some wining to Machel Montano's "Ministry of Road" come Labor Day in New York. Getty Images Latin America hide caption

Latitudes: International Music You Must Hear

April 30, 2014 • From a carnival hit about infrastructure to a North African legend with a pop kingmaker at his side, these five essential global tracks are joyful, energetic and the perfect soundtrack to spring.

September 8, 2009 • On this edition of All Songs Considered we've got an unusual new project from Victoria Bergsman.

August 25, 2009 • Khaled is Algeria's best-known singer, as well as a pioneer of the music known as rai, which means "opinion." His opinions got him exiled from his native country for the past 20 years, but he recently returned as a hero. Khaled's new CD, Liberte, is a return to his roots.

Khaled Widens the Sounds of Algeria

June 27, 2005 • Khaled is Algeria's best-known singer. He has become internationally known for singing Rai, the music of Algeria's shantytowns. His new album, Ya Rayi, features collaborations with a wide variety of musicians and producers, including guitarist Carlos Santana. Banning Eyre has a review.

Khaled Widens the Sounds of Algeria 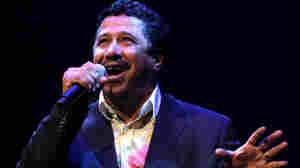 July 26, 2010 • Algerian singer Khaled is known internationally for singing rai — a kind of North African music with roots in traditional folklore. Taken literally, rai translates to "opinion," and Khaled has taken that idea to heart. Although his music won him enemies among Algeria's Islamic fundamentalists in the 1980s, he continues to use his voice to spread a message of peace, love and personal freedom.