March 28, 2005 • NPR's Piano Jazz and WBGO in Newark honor the jazz singer and pianist Bobby Short with a look back at two of his live performances. The encore presentations include an appearance on Piano Jazz with Marian McPartland.

March 21, 2005 • Singer Bobby Short, 80, died this morning in New York, the city whose elegance he epitomized. Short had suffered from leukemia. Bobby Short was a fixture at the Cafe Carlyle, where he entertained the rich, the famous, and the tourists who could afford it. It was a world far different from the one from which he came. Born in Danville, Ill., just before the Depression, Short began his professional career at 9.

A Conversation with Bobby Short

March 21, 2005 • New York cabaret legend Bobby Short died Monday of leukemia at age 80. The singer performed at New York's Carlyle Hotel for nearly four decades. Short was born in Danville, Ill., and began his career at age 9, known as "The Miniature King of Swing." He was named a Living Landmark by New York's Landmark Conservancy and a National Living Legend by the Library of Congress.

A Conversation with Bobby Short

March 21, 2005 • NPR's Karen Grigsby Bates offers an appreciation of cabaret singer and piano player Bobby Short, who died at the age of 80. Short's performances of American standards won him audiences and fans for more than seven decades, and he and his band performed at the Carlyle Hotel in New York City for 37 years.

June 28, 2004 • He's been playing piano and singing at the Carlyle Hotel in New York City since 1968. He's considered one of the great cabaret singers of our time. The 79-year-old song stylist was slated to retire from the Cafe Carlyle this coming New Year's Eve, but he's extended his schedule, and he's not going anywhere for the time being. Short has been named a "living landmark" by New York's Landmark Conservancy and a "national living legend" by the Library of Congress. 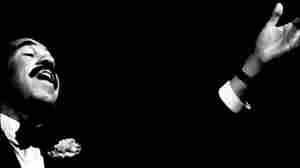 Bobby Short on the cover of his 1955 self-titled album. Courtesy of the artist hide caption

July 17, 2009 • He was one of the greatest cabaret performers of the 20th century: a powerful singer whose "two-fisted" piano playing never overpowered his infectious warmth. Piano Jazz continues its 30th-anniversary celebration with an encore broadcast featuring Short from the very first season.